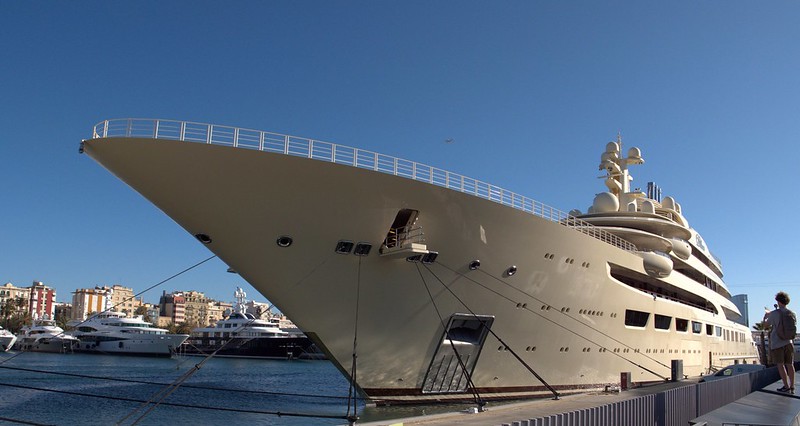 The US$600 million worth yacht Dilbar, belonging to Russian billioner Alisher Usmanov, is the world’s largest yacht by gross tonnage and requires 96 crew members to man it. The vessel was not allowed to leave the port of Hamburg, following the international sanctions against Russia. (Photo: chris couderc, Flickr, License) A press release from French customs said that the Amore Vero arrived at the port of La Ciotat in January and was scheduled to depart April 1, but that authorities had reason to believe the yacht had made arrangements to depart sooner.

Sometimes referred to as the "Darth Vader" of Russian politics, Sechin is part of President Vladimir Putin's inner circle and his close advisor. An article published in 2017 said that no one else in the state of Russia has as much power as the head of Rosneft.

The vessel belonging to another Russian billionaire, Alisher Usmanov, is not allowed to leave the port of Hamburg, according to German media. The US$600 million Dilbar is the world’s largest yacht by gross tonnage and requires 96 crew members to man it.

Usmanov, a businessman in iron ore and steel and former investor in the Arsenal Football Club is according to Forbes the 99th richest person in the world and one of the richest people in Russia.

According to SuperyachtNews, seven to ten percent of superyachts owned worldwide are registered to a Russian owner.

Sanctions implemented by the U.S., U.K, EU, and Canada have targeted Russian officials, businessmen and entities after Russia invaded Ukraine. As soon as they were announced, Russian tycoons' superyachts were seen heading to the Maldives and the Seychelles.

Four of the largest vessels anchored now in the Maldives belong to Russians, according to Bloomberg.

The 459-foot (140-meter) Ocean Victory belongs to steel magnate Victor Rashnikov, according to SuperyachtFan.com. The 238-foot Clio could be linked to tycoon Oleg Deripaska.

A vessel of another Russian steel magnate, Alexei Mordashov, the 465-foot Nord, was at the Maldives, but then sailed to the Seychelles, according to the report. Companies close to Mordashov were believed to be doing business with companies close to one of Putin’s best friends — cellist Sergei Roldugin, also known as “Putin’s wallet” — whom the EU also added to its list of sanctioned officials and military figures.

Sea Rhapsody, a vessel of another Putin’s close associate, the head of the Russian state lender VTB Bank, Andrey Kostin, is allegedly also heading towards the Seychelles, after departing Turkey in February.

VTB Bank has been put on the sanctions list on Monday.

Together with Credit Suisse, VTB Bank was also involved in the so-called “Tuna Bonds” scandal, in which the two lenders borrowed more than US$2 billion to Mozambican state-owned companies between 2013 and 2016 to fund maritime projects in the east African country, including a state-owned tuna fishery.

The loans were packaged into bonds that were sold to investors around the world. When Mozambique defaulted on the loans in January 2017, the country entered a severe financial crisis, with the IMF and World Bank suspending aid as debt rose to 112 percent of the GDP.

In 2019 Andrey Kostin himself was the focus of a scandal that erupted after claims were made that he used state funds to shower his lover, Russian TV presenter Nailya Asker-zade, with expensive gifts.

German media reported that President Putin’s yacht, the Graceful, was docked in Hamburg for renovation but that it had suddenly left the port two weeks before Russia invaded Ukraine. Satellite images obtained by CBS News show the yacht now docked in a highly militarized port in Kaliningrad, in Russian waters.