European consumers love to buy and use cocaine. Criminal elements in Latin America are happy to feed that market, with the help of criminal groups in Europe. 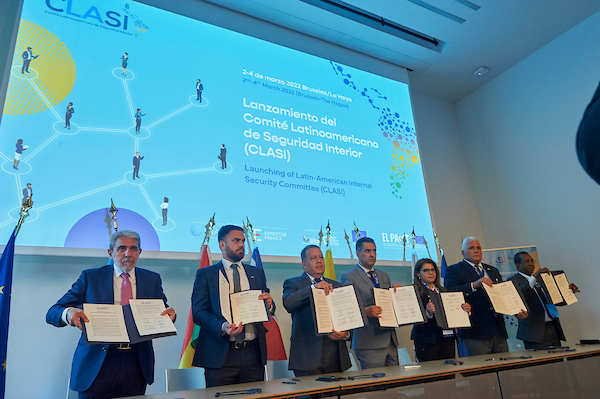 EL PAcCTO has also identified seven criminal economies as priorities to fight: human trafficking; cybercrime; crimes against property; smuggling; illicit arms trafficking; money laundering; and environmental crimes. (Photo: EL PAcCTO, License)Unfortunately for this profitable network of partnerships, the governments on both sides of the Atlantic have formed a new joint effort to fight not just drug trafficking but many aspects of crime in both regions.

This bi-regional program funded by the European Union and signed by seven countries will create the Latin American Internal Security Committee (CLASI). The initiative is part of the Europe-Latin America Assistance Programme against Transnational Organized Crime (EL PAcCTO).

“The reality is that we need Europe as much as the rest of America because we have similar problems,” said Aníbal Fernández, the Minister of Security of Argentina and CLASI’s first rotating president. “We can help each other.”

These two regions are already connected by drug trafficking. Europe is one of the most attractive cocaine markets in the world, while South America supplies most if not all of the cocaine consumed there. A kilo of cocaine traded on the European streets is worth around 40,000 euros on average, while in South American countries it is worth around 1,200 euros wholesale.

Last February, EL PAcCTO endorsed the Brazilian Federal Police initiative known as the “Wood Law Project,” which focused on battling the illegal timber trade. Representatives from nine countries had met at the Center of Integration and Improvement of the Environmental Policing (CIAPA) in the heart of the Brazilian Amazon Basin, where the Wood Law Project was carried out. They were joined by agents from the United Nations, Europol, and Interpol.

“You pick up a sliver of wood, take a picture, upload it to the system, and then it identifies the type of wood,” a Brazilian police officer told local media.

According to the NGO Imazon, 55 percent of logging in one Brazilian state in the Amazon Basin was illegal between 2019 and 2020. Much of this illegal timber was smuggled into foreign countries, especially in North America and Europe.

In addition, OCCRP has reported that Brazil’s corrupt timber trade has undermined efforts to protect the Amazon, where deforestation reached its highest rate in 15 years in 2020-21.

As the last phase of the Wood Law Project, the security forces and bodies launched an operation to inspect wood shipments in an Amazon Brazilian port, officials reported.

Officials plan future joint operations between Latin America, European Union, and Europol in Brazilian and foreign ports. They believe that promoting cooperation from the wood exporting and importing countries is the key to succeed in disrupting environmental organized crime.