So-called “dark fleets” - thousands of ships that switch off their tracking beacons in order to remain invisible to authorities while illegally fishing, have descended from China and other countries on Argentine waters, Oceana, an NGO that covers global maritime issues reported. 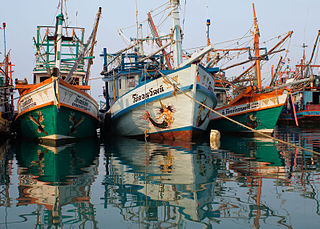 Transshipping at sea allows illegally caught fish to be mixed with legal catch. (Photo: northways/apes_abroad, Flickr, License)The NGO monitors the tracking beacons of fishing ships and found that between January 2018 and April 2021, more than 800 of the fleet’s vessels went ‘dark’ over 6,000 times, most likely by switching off their tracking devices, conducting almost 900,000 hours of fishing close to Argentina’s national waters.

The report, titled, ‘Now You See Me, Now You Don’t: Vanishing Vessels Along Argentina’s Waters,’ makes it clear that the NGO suspects the ships crossed from the open sea into Argentinian waters during periods they had their tracking devices turned off.

China’s distant water fishing fleet is one of the largest in the world. Last summer it almost set off an international incident with Ecuador, when it descended on the protected waters of the Galapagos Islands.

Oceana estimates that fishing by foriegn flagged vessels, much of it illegal, and unreported and unregulated (IUU), makes up some 91% of all fishing in Argentine waters. At least two thirds of that is estimated to be the work of the Chinese fleet alone, the rest are fleets from Korea, Taiwan and Spain.

More than half of the vessels that had their devices switched off “engaged in ackingat-sea transshipment events. During transshipment, fishing vessels can transfer their catch to refrigerated cargo vessels,” the report said.

Transshipping at sea allows illegally caught fish to be mixed with legal catch, the report explained.

Many of those ships ultimately found their way into the port of Montivideo, Uruguay, which according to Oceana is particularly popular with IUU shipping.

“Fishing at this scale, under the radar, and without regard for laws and sustainability can have detrimental impacts on entire ecosystems, as well as the people and economies that depend on them,” she warned.

IUU fishing isn’t just a threat for ecological reasons either, according to a report by Interpol in December, it also spawns a large network of organized criminal activity.

“Money laundering, labour exploitation, corruption and forgery are a small sample of serious crimes commonly committed during IUU fishing today,” Interpol said in a statement. “Fishing vessels are often also used to smuggle people, drugs and firearms, as well as to carry out piracy or terrorist attacks.”