It was painful to watch even though it was fake. For a whole day, a young man wearing a white mask sat at the most frequent spot in Sarajevo’s largest shopping mall and shredded fake 200 convertible mark bills (US$125). 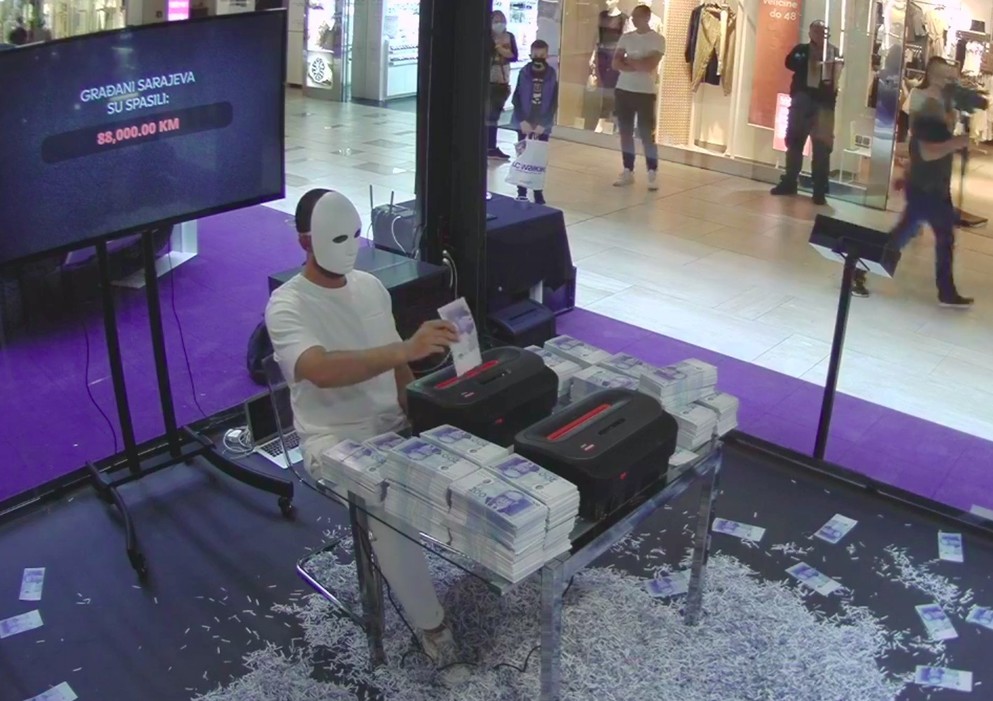 Money shredding as an illustration for corruption. (Photo: screenshot, RAI, Facebook)His task in this anti-graft performance that started on Wednesday was to destroy a total of three million marks ($1,87 million), which is how much experts estimate is lost to corruption in Bosnia and Herzegovina every day.

Bypassers kept pressing a red button - symbolically blowing the whistle on corruption - forcing him to stop shredding more banknotes stapled next to him and although he would proceed after a while, citizens still managed to save almost a third of the money that was supposed to be destroyed that day.

‘Whistle for the End’ is the first major part of the Public Awareness Campaign organized under the auspices of the regional project ‘Breaking the Silence: Enhancing the whistleblowing policies and culture in Western Balkans and Moldova’ funded by the European Union and implemented by the Regional Anti-corruption Initiative Secretariat (RAI).

RAI is working to strengthen the legislative and institutional framework for the protection of whistleblowers, in line with the new EU Directive on their protection.

Anti-Corruption Expert and RAI Project Manager, Elmerina Ahmetaj Hrelja, believes it’s possible to whistle for the end, simply by saying no to corruption.

“This gesture will show us how much money we can save from destruction, only when we don’t accept to take part in corruption,” she said, presenting the event.

The Organization for Security and Cooperation in Europe (OSCE) mission in Bosnia and Herzegovina warned in November that the judicial response to high corruption cases in the country remains too weak.

The head of the mission, Kathleen Kavalec, stressed then that “re-establishing integrity, impartiality and accountability within the judiciary is a necessary precondition for a more effective judicial response to corruption.”

At the same time, the head of the EU Delegation and EU Special Representative to Bosnia and Herzegovina, Ambassador Johann Sattler, stressed that widespread corruption in the public sphere, and its strong link to organized crime, is “one of the most arduous problems Bosnia and Herzegovina is facing today.”

The country’s deeply complicated political system, which was brokered to end the 1992-95 bloody war, left the 3.5 million-strong Balkan nation with an enormous administration, a poor economy and an overcrowded, inefficient judiciary — a fertile ground for corruption and organized crime.

According to the 2020 Transparency International Corruption Perceptions Index, the country fell 10 places and now ranks 111th on a list of 180 countries.