The corruption and self-enrichment that define Zimbabwe’s government has led to the formation of cartels across various economic sectors, including mining, energy, transport and agriculture, claims a report released on Tuesday. 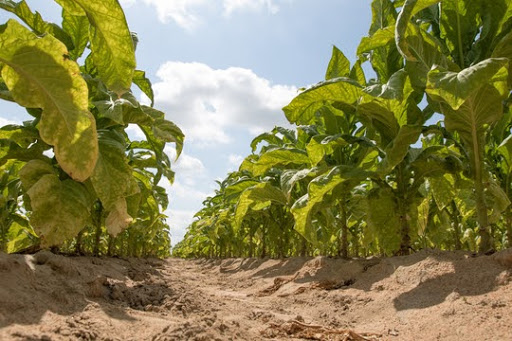 Tobacco plants in Zimbabwe. The lucrative industry is dominated by politically-connected cigarette cartels (Photo: Chris Sheppard, Shutterstock)Published by South Africa’s Daily Maverick, “A Study of Cartel Dynamics” exposes how the 2017 military coup that toppled autocratic leader Robert Mugabe failed to remove the kleptocratic power brokers and patronage networks around him.

The result has been a minor reshuffle, with his successor from the same ZANU-PF party, President Emmerson Mnangagwa, merely replacing him as the head of a highly corrupt political and economic structure that has overseen the cartelization of Zimbabwe’s economy.

“[These cartels] go against the public interest, and they are characterised by collusion between the private sector and influential politicians to attain monopolistic positions, fix prices and stifle [the] competition” asserts the document.

While the most obvious examples relate to the systematic looting of Zimbabwe’s gold, platinum and diamond reserves, other sectors suffer over equally corrupt business practices: for example, the tobacco industry.

Zimbabwe is Africa’s largest tobacco producer, yet much needed excise taxes are lost due to the illegal practices of major cigarette cartels. These companies declare their cigarettes are for export, collect the subsequent rebate on the excise duties and then smuggle the cigarettes either straight back into Zimbabwe to be sold on the black market or into neighbouring South Africa.

Pacific cigarettes make up most of the seized tobacco in South Africa. The Pacific Cigarette Company that produces them is co-owned by Robert Mugabe’s nephew-in-law, Adam Molai.

Furthermore, the report highlights allegations “that [the head of the Zimbabwe Miners Federation], the First Lady, Auxillia Mnangagwa and one of the President’s sons, Collins Mnangagwa are part of ‘an elite trafficking cartel’ that smuggles gold out of Zimbabwe,” while noting how President Mnangagwa himself was identified as a beneficiary of illegal gold mining profits in a 2003 court case.

This is the same man who in 2017 vowed to tackle the illicit financial flows that deprive Zimbabwe of up to US$3 billion per year, keeping a third of its population in extreme poverty, and reign in impunity in a country that still ranks 157th out of 180 on Transparency International’s annual corruption perception index.

According to this exposé, he is now the centre of the corrupt nexus of politicians, businessmen and military figures that make up Zimbabwe’s cartels.

It’s unclear who compiled the 64-page report, which the Daily Maverick described as a document that “provides a post mortem of the cancer that killed the Zimbabwean dream of freedom and independence.”

The outlet said it fact-checked the report and “can vouch for the veracity of the information it contains.” Because of the threat of repression the interviewees are all anonymous and records of interviews have been destroyed, it said.