Pakistan welcomed on Monday the handover of 45 looted antiquities which U.S. authorities seized in 2015 from a New York art dealer and is arranging a special transfer to bring them home. 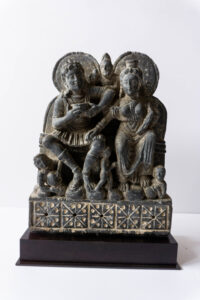 The art world has found itself embroiled in money laundering and organized crime through the trade and sale of looted cultural property. (Photo: Manhattan District Attorney)Among the objects which were valued US$250,000 is a so-called Gandharan Box containing ancient Greaco-Buddhist religious relics, dating back to the 2nd Century C.E.

The artifacts were among some 100 items seized from the arrested Upper East Side art dealer Nayef Homsi who specialized in South and Central Asian art at his firm, Ancient Art of Asia.

A statement from the office of Manhattan’s District Attorney said described Homsi as “a known trafficker involved in the illegal looting, exportation, and sale of ancient art from Afghanistan, India, Pakistan, and other nations.”

“Many people believe the looting and theft of antiquities are injustices that only occurred in the past, but these crimes of culture are still being committed all over the world every day,” said District Attorney Cy Vance.

The artifacts were officially handed over last week during a repatriation ceremony attended by Pakistan’s Consul General Ayesha Ali in New York.

"This is a welcome move and we thank the U.S. authorities,” Nausheen Javed Amjad, the Pakistani government’s Secretary of the National Heritage and Culture Division told OCCRP on Monday.

Special arrangement are under way to transfer the pieces back home, she said, adding that “currently we have no information from where these relics were stolen.”

Pakistan should toughen its laws and conduct proper checks at borders and airports to better protect its archeological heritage from smuggling and trafficking, she said.

U.S. authorities began investigating Homsi in 2012 when he acquired an ancient statue of the Buddhist deity Samvara.

Homsi hired an investigator to research the object’s provenance and learned that it was looted from a Nepalese temple in 1983. Homsi acknowledged that the acquisition contained “the black spot of theft” in an email to another art dealer, but then avoided researching the object any further out of fear of confirming the investigator’s findings, DNAinfo reported.

He sold the Samvara statute and several other artifacts which were revealed to be stolen.

“While the preservation of one’s culture is a commitment made by whole communities and has existed since the beginning of civilization, the high profit business of smuggling and trafficking antiquities has also been around for ages,” said Peter C. Fitzhugh, Special Agent-in-Charge of Homeland Security Investigations in New York.

The art world has found itself embroiled in money laundering and organized crime through the trade and sale of looted cultural property.

In a cash-heavy industry with too often little oversight, false provenance records can boost the value of an item whose sale can then be used to underwrite illegal deals or whose donation can be used for a bloated tax write-off.

The U.S. Department of the Treasury issued an advisory threatening art dealers with sanctions for dealing with figures on their Blocked Persons List, Art&Object reported.

In countries where looting is prevalent, the illegal trade is often a significant funding source for both organized crime and militant groups.

“You cannot look at it separately from combating trafficking in drugs and weapons. We know that the same groups are engaged, because it generates big money,” said Catherine de Bolle, Executive Director of Europol, after a major crackdown on the trade in May.

“Organized crime has many faces,” she said. “The trafficking of cultural goods is one of them and it is not a glamorous business run by flamboyant gentlemen forgers, but by international criminal networks.”