Although the United States has given no indication that it is presently investigating any of the country’s former presidents, Mexico’s current leader has said he would be willing to extradite one of his predecessors were he asked to do so. 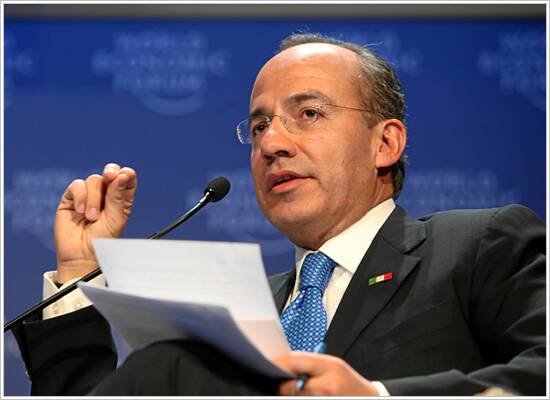 Against the backdrop of his increasingly hard-line stance on graft, Lopez-Obrador has said he would be willing to extradite Calderon (pictured) at the request of the US (Photo: World Economic Forum, CC SA-BY 3.0)President Andres Manuel Lopez-Obrador told journalists in an exclusive interview with national newspaper La Jornada, published on Tuesday, that he was open to the possibility of handing Felipe Calderon over to the U.S. Justice Department.

While failing to explain what sort of probe might prompt such a request, Lopez-Obrador’s comments come amid his increasingly hard-line rhetoric on the endemic issue of graft in Mexico.

Two weeks ago, the leader floated the idea of holding a national referendum to decide whether former presidents should continue to be protected from prosecution over allegations of corruption, as indeed is presently the case under Mexican law.

The proposal followed shortly after the leader described as “filth” a viral video showing congressional staffers stuffing suitcases with presumed bribery payments, as well as conceding that corruption under past administrations had allowed the country to become a “narco state.”

Calderon, who was responsible for instigating Mexico’s military-led ‘war on drugs’, has been the subject of consistent attack from the current leader over the past few weeks.

In particular, Lopez-Obrador has pointed to U.S. charges levelled against Genaro Garcia Luna, former security minister under Calderon, alleging direct collusion with the Sinaloa cartel - one of the country’s largest, most lucrative and notoriously violent drug-trafficking organisations.

Felipe Calderon is not the only former premier to be facing scrutiny over allegations of corruption under his tenure. Prosecutors recently opened a graft investigation against another of Lopez-Obrador’s predecessors, Enrique Pena Nieto.

The probe follows after Emilio Lozoya - former head of state oil company Pemex, who was recently extradited from Spain to face charges of receiving illicit payments from Brazilian construction conglomerate Odebrecht - publicly accused Nieto of being complicit in the bribery scheme.

Nieto will have to answer difficult questions from the authorities, not least after a witness at last year’s U.S. trial of former Sinaloa syndicate leader, Joaquin ‘El Chapo’ (‘Shorty’) Guzman, accused him of accepting more than US$100 million in bribes from the criminal organisation.

Indeed, public support for substantive action against former leaders of the country appears to be growing. However, experts have expressed concern over the possibility of anti-graft campaigns being politicised to the extent that they might then be used by the present administration to purge opponents from the country’s political institutions, according to The Yucatan Times.

Lopez-Obrador’s rhetoric may have been emboldened by the recent release of his administration’s annual report, which claims his government has delivered on “95 of 100” promises on which he swept to power in 2018, as reported by Mexico News Daily.