Serbian President Pledges to “Fight the Lies” About His Son

After reporters again caught his son in company of alleged members of a drug trafficking clan, Serbian President Aleksandar Vučić hinted on Friday that journalists were painting a target on his son’s forehead but that he will fight with all the strength he has and “defeat their lies.” 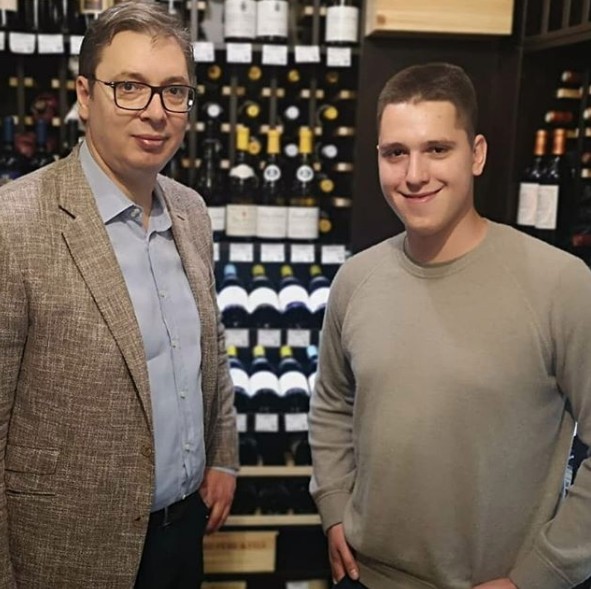 “My son Danilo is an honest and decent young man. He is guilty only because he is my son,” Vučić wrote next to a photo of him and his son.

Not directly naming KRIK, he blamed “them” for “drawing a target” on the forehead of his son, which he described as “irresponsible and rude.”

“By attacking my child, they pushed me into a corner from which I have nowhere to go,” said Vučić and pledged to “fight with all the strength I have to defeat their lies. That’s a promise!”

Vidojević, nicknamed Aca Rošavi (Aca the Pockmarked), is registered in Serbia’s police files as a member of Kavači clan, one of two Montenegrin mafia groups OCCRP, KRIK and MANS reported about in May. He is currently on trial for demolishing a nightclub in Belgrade together with other hooligans.

Danilo Vučić and Aca Vidojević have been seen together in public four times now, according to KRIK. It is unclear what the president’s son is doing in company of a person accused of hooliganism and linked to one of Montenegro’s two mafia clans.

OCCRP/KRIK/MANS mentioned in May Vučić’s son in only one section of their extensive investigation, but that sparked uproar among Serbian officials, who accused journalists of targeting the president’s son on behalf of the opposition.

Following such reactions to the investigation that was followed by threats to KRIK’s journalists, the Council of Europe warned that KRIK “is facing a public smear campaign from the Serbian state.”