A musician in jail on flawed evidence. A journalist arrested for reporting on poor conditions in a local medical center. Hundreds of ordinary citizens charged for breaking arbitrarily enforced isolation measures. 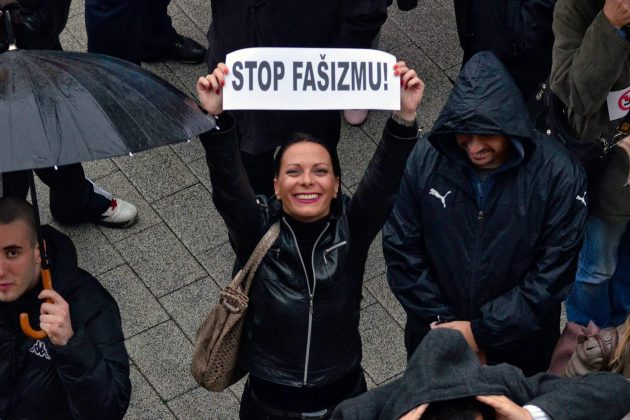 Ana Lalic (source Nova.rs)Serbia, already an illiberal state, has responded to the COVID-19 crisis with a slew of strict measures aimed at slowing the spread of the disease, and which activists and rights groups say have led to abuses while also being used as a pretext to harass and intimidate government critics and journalists.

With the help of Chinese advisors, the government of President Aleksandar Vucic has implemented some of the toughest restrictions in Europe.

People returning from abroad and those aged over 65 have been ordered to self-isolate at home. Violations are punishable by up to three years imprisonment. Citizens have been ordered to stay at home from 5 pm to 5am during the week and on weekends from 3 pm to 5 am. If they don’t obey, the curfew will be extended.

The government claims the measures are necessary to reduce the spread of coronavirus and if not obeyed, Serbians will face the “Italian scenario” of an uncontrolled pandemic.

“All the cemeteries would be too small to accommodate all of us if you listen to other people's advice,” President Vucic said on March 25. “I ask you to listen to your country.”

Reporting by OCCRP’s Serbian member center KRIK over the last week has found the enforcement of the isolation rules has been rife with abuse.

Jovana Popovic, a 24-year-old musician and activist from the Serbian town of Kikinda was arrested at her boyfriend’s house for breaking isolation rules on March 24.

She had returned 10 days earlier from neighboring Montenegro where she was performing and claims she was never told at the border that she needed to self-isolate at home.

“At the border I only got a notice that said to reduce my contacts in the next 14 days if I stayed in areas in which COVID-19 epidemic was active or in case I was in contact with persons that were positive or were suspected of being positive to the infection,” she said, according to a transcript of her statement to police.

At the time of her return, there were no officially recorded cases of COVID-19 in Montenegro.

Popovic’s arrest provoked a nationwide controversy, aided by the fact that she was an politically outspoken artist who had attended and spoken at opposition rallies.

This was heightened after it emerged that prosecutors presented as evidence a questionable document that purportedly showed that Popovic was informed of the isolation order upon her return. The document, issued by the Health Ministry, was both unsigned and undated.

The prosecutor also claimed that Popovic violated a general order to stay home issued to the public on March 17.

Police announced on March 29 that 678 people have been charged for violating isolation orders, with 129 of them still in custody. KRIK reporters have received reports about four other similar cases to Popovic.

"In a state of emergency it is possible to restrict individual human rights, however, if citizens are not adequately informed about their rights and obligations, we have a serious threat to the right to legal certainty," Milena Vasic of YUCOM told KRIK.

Another Serbian NGO, the Association for the Protection of Constitutionality and Legality, is demanding immediate release of all detainees who cannot be proven to have been notified of quarantine measures.

“The manner in which custody of the defendants is ordered is an absolute violation of the Constitution and the law,” the group said in a statement.

Also adding to concern was the arrest on Wednesday of Ana Lalic, a journalist in Novi Sad who had reported on poor conditions at a local medical center dealing with COVID-19. Lalic was reported by the medical center to police for “disturbing the public and damage to reputation”.

She was released from custody the following morning but is still under criminal investigation.

Her arrest caused many negative reactions from local journalist associations and opposition parties to international organizations.

“Journalism and media associations believe that this move is a demonstration exercise intended to intimidate the public, but above all our colleagues who do their jobs professionally in the public interest,” stated Serbian Independent Association Of Journalists.

Organization For Security and Co-operation In Europe (OSCE) Representative on Freedom of the Media Harlem Desir also expressed his concern, stating that he was alarmed by Lalic’s arrest.

“Despite being released today, it is very problematic that police seized her laptop and mobile phones. Journalists need to be able to do their job freely,” he wrote on the official Twitter account.

Speaking about the withdrawal of the regulation, Prime Minister Ana Brnabic stated that the only reason for this was not to cast a negative light on everything the government has done well so far.