One of the four suspects accused of killing Slovak journalist Ján Kuciak pleaded guilty to murder on Monday at the start of a landmark criminal trial seen as a test of Slovakia’s readiness to try alleged organized crime figures with political connections. 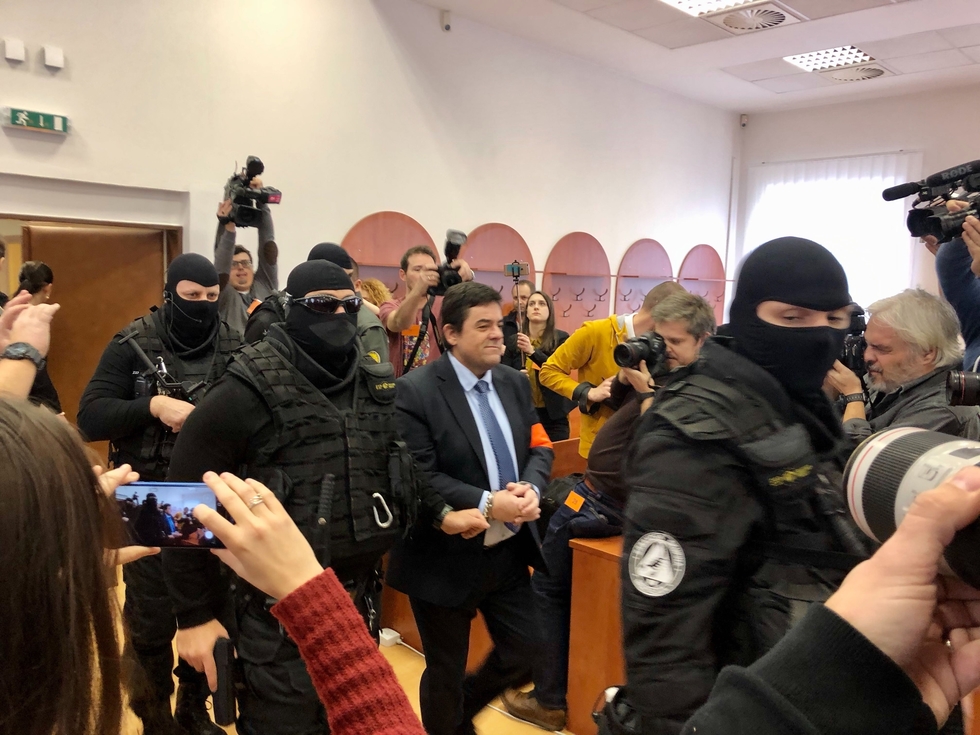 Marián Kočner, entering the courtroom at the start of the landmark Murder trial. (Photo: Eva Kubanaiová, Investigace.cz)In addition to admitting to his role in the 2018 murder of the young journalist and his fiancée Martina Kušnírová, an event which triggered a massive wave of protests across the country and toppled the then-government, Miroslav Marček pleaded guilty to another charge of illegally carrying firearms. He also offered new details about how the murder was carried out and named himself as the person who pulled the trigger, contrary to previous Slovak police reports.

Kočner's ties to organized crime, as well as prominent public officials, have long been the subject of conjecture. He appeared to have a close relationship with the former Prosecutor General Dobroslav Trnka and former Prime Minister Robert Fico, among others, and was therefore seen as "untouchable."

But the last 2 years have seen a massive fallout across the country as these ties have come to incriminate numerous public officials. Slovakia’s police chief and the head of its financial crimes unit both resigned following media reports that information about Kuciak in police databases had been accessed prior to the murders. Trnka, moreover, was suspended after footage leaked to OCCRP appeared to show him setting up a camera in what looks like his office with someone who appears to be Kočner.

In addition to Kočner and Marček, alleged associates to the murder Alena Zsuzsová and Tomáš Szabó were also on trial on Monday. Last year, OCCRP detailed how Alena Zsuzsová, a close friend of Kočner, hired Zoltán Andruskó, a former pizzeria operator, to kill Kuciak for 50,000 euros and to clear 20,000 euros of debt. Not a killer himself, Andruskó hired Szabo and Marček, who are cousins, to carry out the murder.

Zsuzsová pleaded innocent on Monday, while Szabo elected to not deliver a statement. Andruskó, meanwhile, was tried separately from the other suspects for his cooperation with law enforcement and was sentenced to 15 years in prison late last year.

The murder of 27-year-old Kuciak - the first journalist to be killed in European Union member Slovakia since it became an independent country in 1993 - sparked domestic and international outrage, putting Bratislava under intense pressure to solve the case. The lawyers representing Zsuzsová, Szabó, and Kočner all argued that this pressure had "rushed" the 18-month investigation into the circumstances of the murder, that Andruskó's testimony — on which it was heavily based — was unreliable, and that it was full of illegally obtained evidence.

Monday’s took place just north of Bratislava in the town of Pezinok, where Slovakia’s Special Criminal Court, which handles high corruption and organized crime, is located. It began with the prosecutor reading out parts of the 93-page indictment in public for the first time.

Kuciak’s mother wept from her place in the courtroom's left wing, where aggrieved parties sit, as the prosecutor described her son’s murder. She was accompanied by her husband and Kušnírová’s mother, who also wept during different parts of yesterday's proceedings.

Lawyers for both families are claiming €1 million ($1.1 million) in non-financial damages each, in addition to requesting compensation for the costs of the funerals for Kuciak and Kušnírová.

"I would like to start by saying sorry. I think nothing can replace what we took from them," Marcek said during his lengthy testimony, speaking to the aggrieved parties. "I'm aware of what I did. I'm sorry I can't atone for it."