In a coordinated operation, police from seven European countries arrested 18 suspects of money laundering and illegal trade and storage of around 670 tonnes of tobacco, Europol announced on Tuesday. 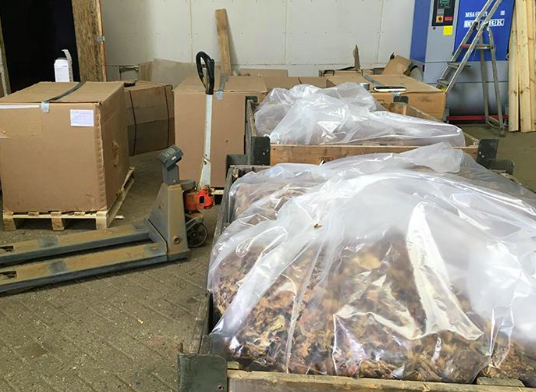 Illegal tobacco trade halted after international operation (Photo: Europol)A total of 29 searches were conducted in Italy, Poland, Belgium, the United Kingdom and the Netherlands, the statement said, adding that this way an international criminal organization involved in large scale illegal trade of tobacco was disabled.

‘’The illegal trade has led to a loss of customs and excise duties for the Dutch fiscal authorities of approximately  EUR 70 million ( US$ 77.67 million),’’ the Europol statement said.

According to Eurojust, which also supported the operation, the group was allegedly buying tobacco in Italy, processing it and selling it to illegal cigarette factories.

‘’The criminals played a role as well in the brokerage of illegally produced cigarettes and bought, sold and repaired machinery for cigarette production,’’ Eurojust said.

The international co-operation of European countries has since last year led to the shutdown of illegal tobacco factories in the Czech Republic, Poland and the Netherlands. Those facilities were closely linked to the arrested suspects.

The operation was based on an analysis of a special operational taskforce Europol and EU state member’s forces that was set up in February 2018, the European Anti-Fraud Office said.