Famed Italian Mobster Busts Out of Prison in Uruguay

Italy has been looking for him for a quarter of a century and was awaiting his extradition when the Uruguayan Interior Ministry announced on Monday that Milan’s “cocaine king,” Rocco Morabito, had escaped from prison. 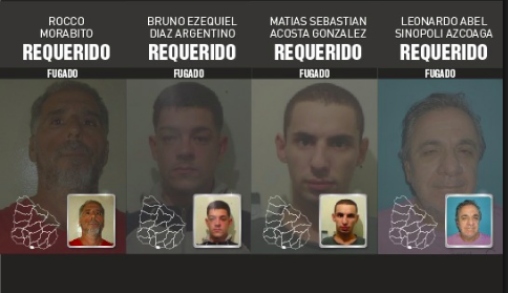 Rocco Morabito and fellow fugitives (source: Uruguay Interior Ministry)At midnight on Sunday, Morabito and three other inmates of Uruguay’s National Institute of Rehabilitation in the capital of Montevideo, broke free through a gap in the roof of the prison, robbed a nearby farm owner, and have not been seen since.

Morabito, a boss in Italy’s notorious ‘Ndrangheta clan, was arrested in Uruguay in 2017 and has been held there while awaiting extradition to Italy, where he faces a 30 year prison sentence.

He has been on the run from the Italian government since 1994 for his role in the ‘Ndrangheta’s drug trafficking. The ‘Ndrangheta mafia, based in Calabria, Italy, is one of the world’s largest distributors of cocaine.

Italy’s Deputy Prime Minister Matteo Salvini took to Twitter to decry the escape, vowing to demand explanations from Uruguay and an investigation into the escape.

He also promised that authorities would “continue to hunt down Morabito, wherever he is, to throw him in jail as he deserves.”

The Uruguayan interior ministry also released photos of the four fugitives and have called on citizens to bring forward any information they may have that would help with their capture.