A Softer Side to Smuggling 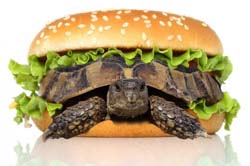 Smuggling doesn't always involve drugs, weapons, or people sold into slavery. Sometimes there's a lighter side to getting objects where customs agents don't want them, and sometimes a smuggler is just a devoted pet owner.

"There's no turtle in there, just a hamburger," said a Chinese man only identified as Mr. Li. "There's nothing special to see inside."

Mr. Li's story circulated around the web after he attempted to smuggle his pet turtle, disguised as a hamburger, along with him on his flight from Guangzhou to Beijing back in August. Li tried to hide his beloved pet using a KFC wrapper, but was found out when security screening workers at Baiyun International Airport noticed the suspicious looking bag passing through an X-ray scanner.

Li is only one of the many bizarre instances of animal smuggling in recent months. Two brothers in New Zealand, in what was described as "youthful bravado" and "exceptionally stupid", smuggled, boiled, crushed, and burned six black rock scorpions from Australia. The brothers snuck the poisonous scorpions through the Christchurch International Airport, in what was a violation of the Biosecurity Act of 1993, and eventually destroyed the animals and burned the bodies after they were found out. After pleading guilty, the brothers are awaiting sentencing scheduled for November 18.

Dangerous animals were part of the job for American William Wylly Lamar, a 63-year-old ecotourism guide who was sentenced to three years probation for imitating a Samuel L. Jackson film. A federal judge decided against jail time for the Texan who smuggled seven live snakes on a plane, hidden in his jacket, on a flight from Peru to the US in 2012.

Stranger still was the Swiss bird specialist who hid contraband animals on his person during international flights. The man was finally busted in Zurich back in 2010 when he was discovered with 25 rare parrot eggs in his underwear. Investigators believe that the man smuggled more than 150 eggs, with a total value of US$71,000. Swiss veterinary services seized several rare birds, worth thousands of dollars, from the suspect and an accomplice. Customs officials only announced the arrest in October 2013 due to the secretive nature of the related investigation.

Some of the stranger animals to be smuggled across borders aren't intended to be sold for a profit. Sometimes, such as the case with geckos being trafficked, where "Some communities in countries like China, Malaysia, Indonesia and Japan believe that Geckos can heal deadly diseases like cancer and HIV infections."

And then there are the times when the animals themselves conduct the smuggling. Mammals have been used to smuggle drugs and communication devices into prisons, while avian animals have taken part in violating international embargos. Pigeons have been trained to fly 100 miles from Cuba to Florida, smuggling cigars into the United States.

" How those cigars end up on the birds, I can’t say,” 41-year-old Duke Riley, who has trained pigeons to undertake the long journeys, told the New York Times. “If a bird ends up in my pigeon lofts, that happens to have a cigar from Cuba, and there also happens to be a pigeon that has a video camera on it, that shows footage of birds flying from Havana to Key West with cigars — yeah, I can’t really say how that happened."

Are Riley's methods a new phenomenon used to avoid recent cutting edge-technology? "I wanted to subvert this billions-of-dollars high-tech system with things that were being used in ancient Sumeria,” he says.

While large-scale cartels and smuggling operations make use of modern technology, large-scale trafficking tunnels, and other extensive techniques, modern law enforcement has a hit-or-miss record for stopping the more quirky and offbeat animal smuggling practices used by pet owners, enthusiasts in want of some extra capital, or trainers like Riley.

“Generally, I do things that don’t really seem that feasible,” says Riley, “and then they tend to work out.”