On October 26, Kyrgyz authorities blocked the website of Radio Azattyk, the Kyrgyz branch of Radio Free Europe/Radio Liberty, for a period of two months. The reason was a story about new clashes on the Kyrgyz-Tajik border, in which dozens of people died and thousands were forced to temporarily evacuate. Two days ago, Azattyk’s bank accounts were also frozen without clear explanation — by order of the Kyrgyz secret police, Azattyk’s management learned. 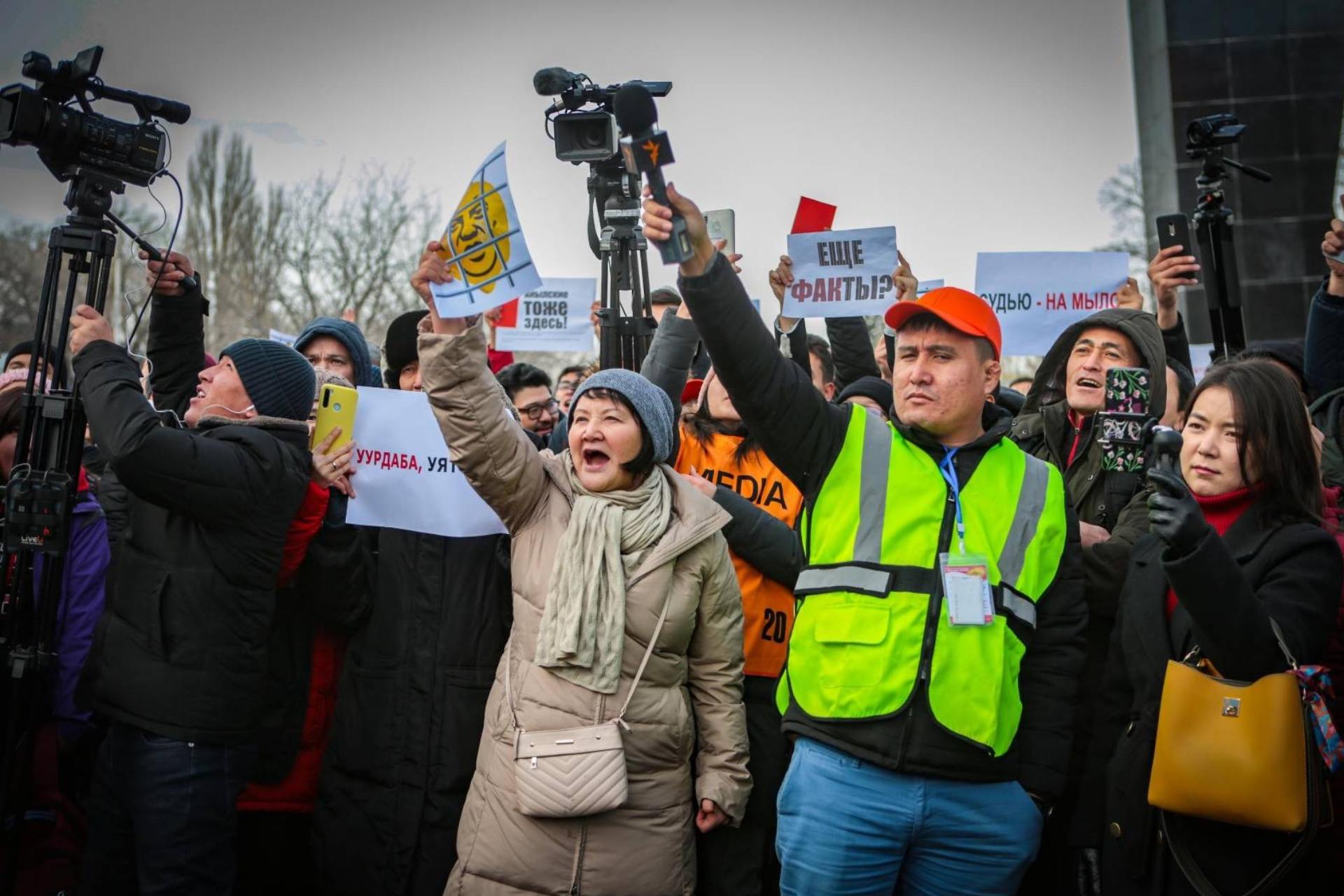 A Radio Azattyk reporter covers a protest against corruption in the Kyrgyz customs service in Bishkek in December 2019. (Photo: Gulzhan Turdubayeva/Radio Azattyk)

International human rights activists from Human Rights Watch called the blocking of Azattyk a blatant attempt to control and censor independent journalism. Many Kyrgyz publications instituted a temporary news blackout out of solidarity with their colleagues, publishing notices reading: “No news today. Media under pressure in KG."

This was no overreaction. Over the years, Radio Azattyk has been one of the most critical — and enduring — sources of information for the people of Kyrgyzstan. After all, Azattyk (which means “Freedom” in Kyrgyz) went on the air long before Kyrgyzstan gained independence from the Soviet Union. In 2023, the Kyrgyz branch of Radio Liberty will celebrate its 70th anniversary, marking a full lifetime of work.

Dozens of prominent Kyrgyz journalists have worked for Azattyk over the years. Some were so successful in conveying the problems of Kyrgyz society that they directed the stature they earned into political careers. Others opened their own editorial offices.

Kyrgyzstan is a small country with a small media community. Azattyk is one of the only publications that could afford to have correspondents not only in the capital, Bishkek, but also in the rural regions. Its focus on remote parts of the country has always been a hallmark: Azattyk not only covers the regions, but also broadcasts in their native language, Kyrgyz, unlike most Bishkek-based publications, which use Russian. 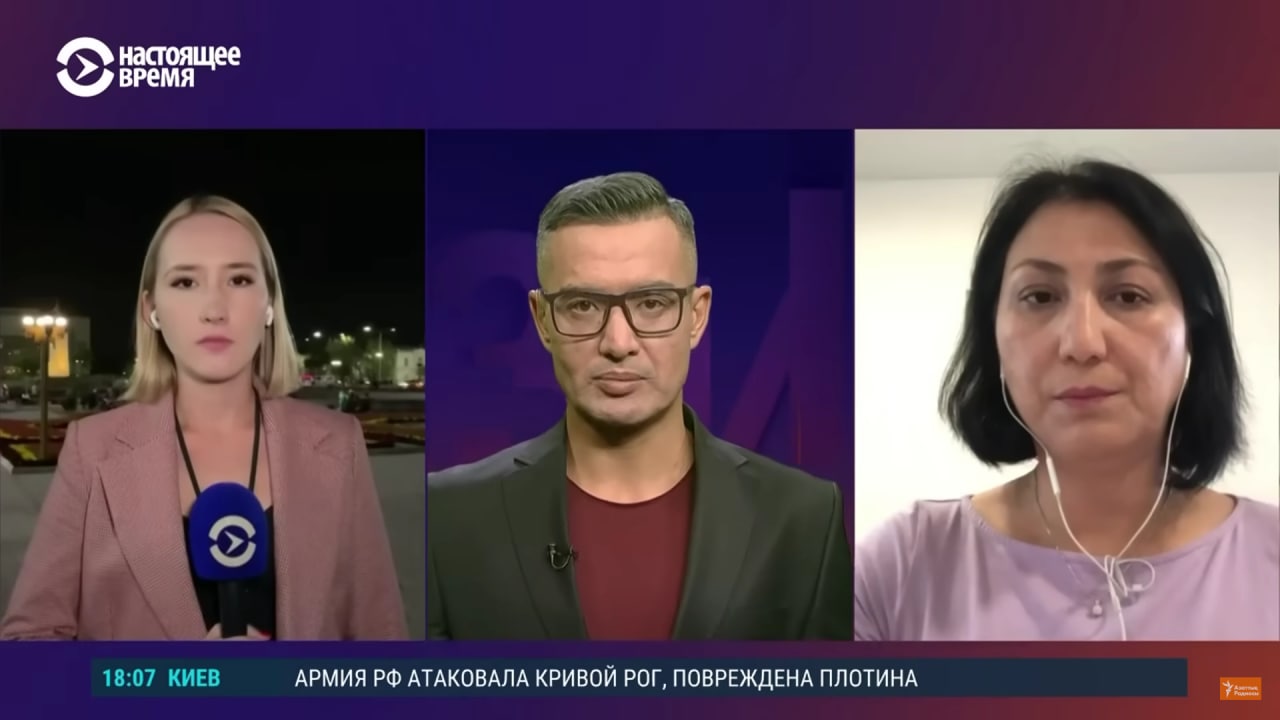 Formally, Radio Azattyk was blocked because it aired an episode of the RFE/RL-produced show Current Time about military clashes on the Kyrgyz-Tajik border. Authorities claimed the episode contained false information about the conflict.

Over the past 10 years alone, Azattyk has repeatedly shown that it is possible not only to cover the news, but also to conduct serious investigations into the vices and abuses of Kyrgyz leaders and officials.

Perhaps the clearest example of Azattyk journalists’ courageous work is their collaboration with OCCRP and Kloop.kg on a series of investigations into smuggling and corruption in Central Asia, which led not only to arrests and fines in Kyrgyzstan, but also to the sanctioning by the United States of a key player, former customs boss Raimbek Matraimov, under the Global Magnitsky Act.

The corruption revealed in those stories was so outrageous that the Kyrgyz people took to the streets demanding justice, and eventually achieved a change of government in October 2020, for the third time in the country’s young history.

The new president of Kyrgyzstan, Sadyr Japarov, who came to power in the wake of the revolution, promised that there would be “no pressure against the opposition or the media” on his watch. But he has already fallen far short of this promise: since he took office, dozens of opposition figures have been arrested, and a number of respected media outlets have been prosecuted or targeted by mobs of protesters who appear to be centrally coordinated. Just yesterday, a prominent political commentator and government critic was arrested for “distribution of extremist materials”.

In August 2021, a new law on “protection from false information” was enacted. It allowed the Kyrgyz authorities, for the first time, to freely interpret whether statements made in the news media are true, and to block news outlets without recourse to a court decision if they publish something the government deems false. Azattyk is the third publication to have had this law used against it.

All this looks like a serious threat to media freedom in the country. 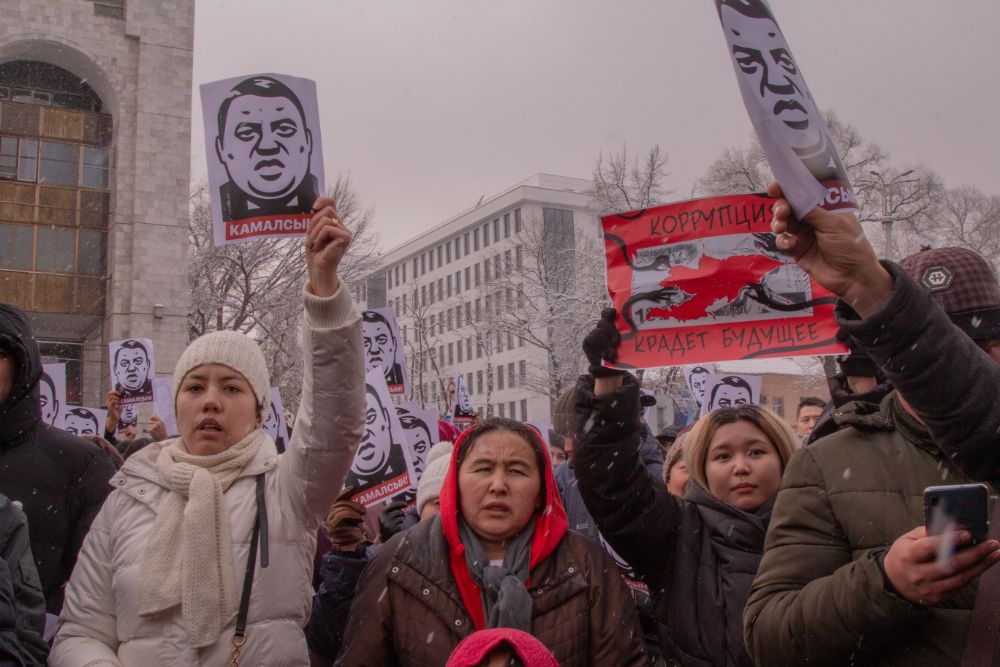 Abuses in the Kyrgyz customs service uncovered by Radio Azattyk, OCCRP, and Kloop.kg led to a series of anti-corruption protests. (Photo: Alexandra Titova/Kloop.kg)

But the history of independent Kyrgyzstan shows that when governments make attempts to restrict Azattyk’s work, it rarely ends well for them. Going after the independent media is often the first step in a slide towards greater repression that can easily backfire when citizens become fed up.

Presidents Askar Akayev and Kurmanbek Bakiyev tried to do just that shortly before their regimes collapsed in 2005 and 2010, respectively. In both cases, citizens frustrated with corruption and cronyism led the charge.

Almazbek Atambaev tried to sue Azattyk in 2017 and publicly spoke out against the outlet. After leaving the presidency later that year, he fell out of favor with his successor and is now serving time on several charges. 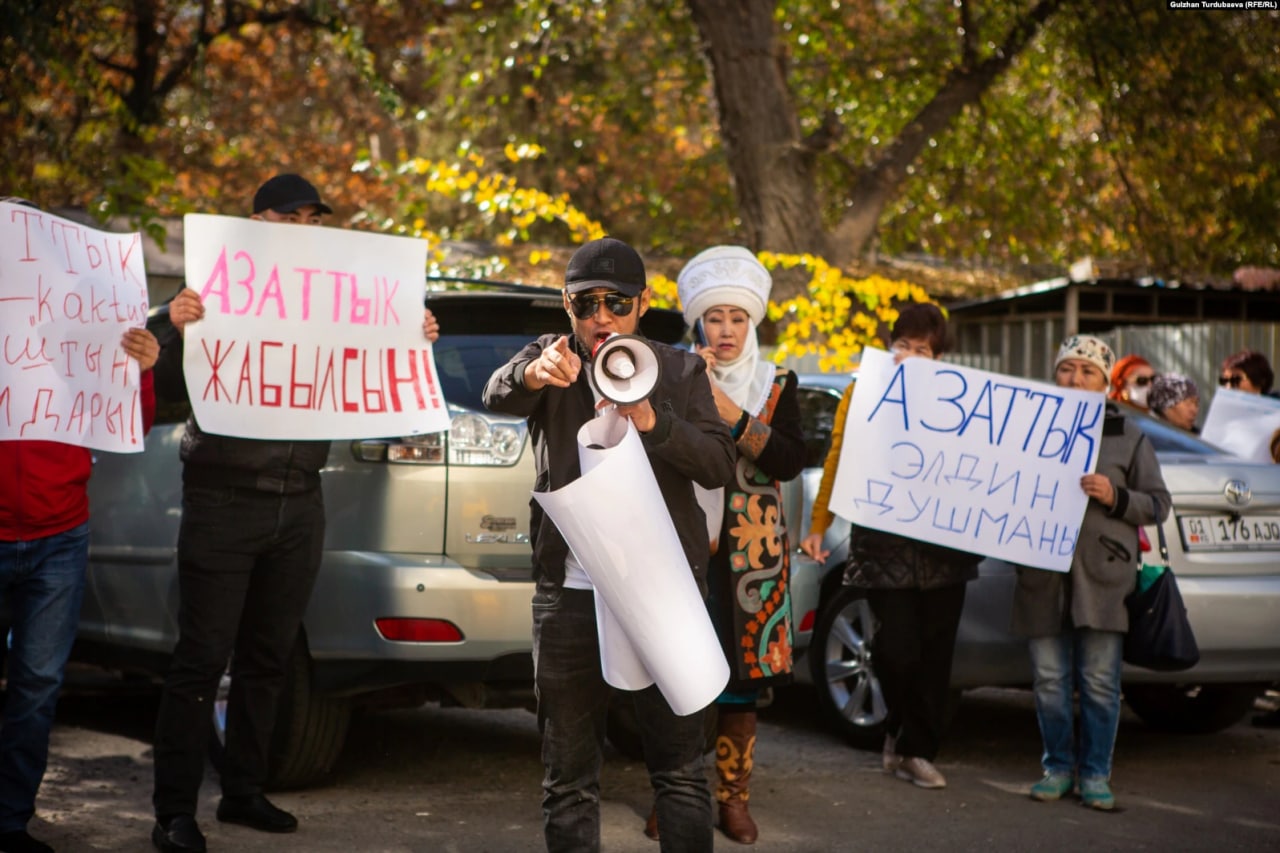 A couple of weeks before Azattyk was shut down, protesters gathered outside its offices demanding that it be closed. The protesters, who appeared to be centrally coordinated, also demanded the closure of two other independent media outlets, Kloop.kg and Kaktus.Media. (Photo: Gulzhan Turdubaeva/Azattyk)

Sooronbai Jeenbekov, who succeeded him, did not openly oppose Azattyk, but his laconic reaction to anti-corruption investigations and rallies said more than he could. His reign also ended ingloriously after a mass uprising in October 2020.

Now the country is headed by Sadyr Japarov, who was in the political opposition before he took office. His struggles against the previous regime were regularly covered by Azattyk. But today, his officials are using the same rhetoric as his predecessors to put pressure on the media, using buzzwords like “false information,” and “not just freedom, but also responsibility”.

All this creates a sense of deja vu: a feeling that Kyrgyzstan’s leaders are not learning from their country’s history.

That history has a lot to teach. But perhaps its main lesson is that democratic values like freedom of the press are a bulwark that keeps the country from sliding into authoritarianism.