A Florida judge sent Mexican scientist Héctor Cabrera-Fuentes to jail in June on the charge of being an unregistered foreign agent. Now, reporters have discovered he was involved in discussions with the government of President Andrés Manuel Lopez Obrador on plans for an ambitious railway project. 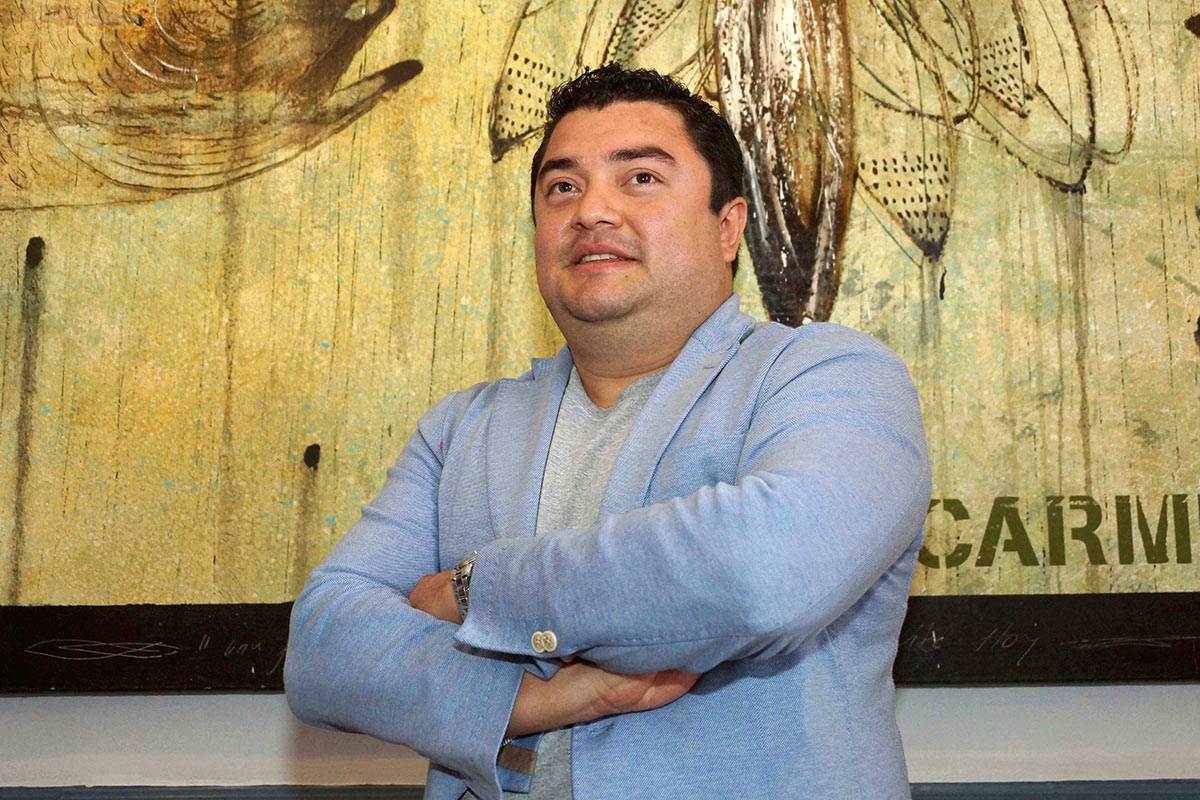 Before his June sentencing for helping Russia spy on the United States, Héctor Cabrera-Fuentes pleaded for leniency. His lawyers argued that he was a world-renowned researcher on cardiovascular disease, and a role model for his charitable work in the impoverished Mexican state of Oaxaca.

Cabrera-Fuentes’ journey began from humble origins in the small town of El Espinal, where many people still speak the indigenous Zapotec language and wear traditional brightly flowered clothing. He rose to become an internationally prominent doctor before becoming entangled in the espionage scandal. 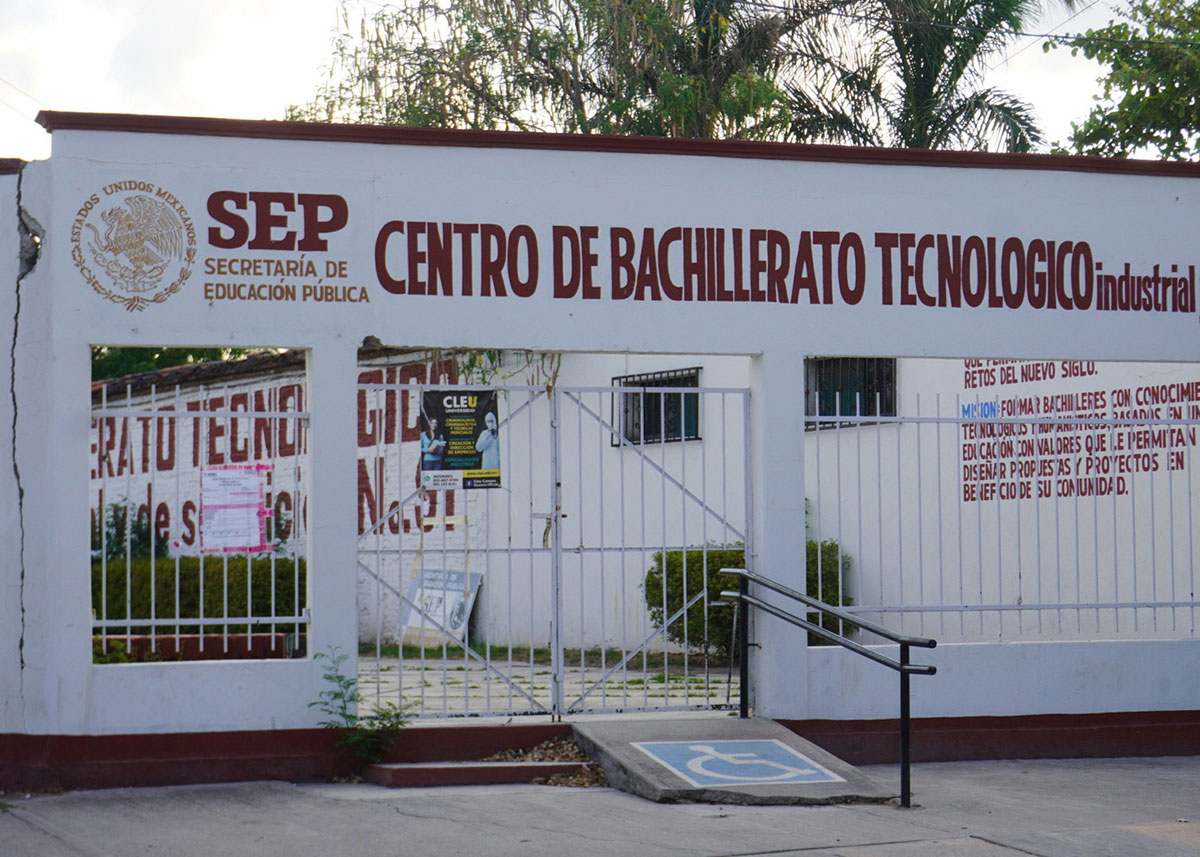 Reporters from OCCRP and the Miami Herald have also discovered that this improbable saga included stops at Mexico’s National Palace, the official workplace of President Andrés Manuel Lopez Obrador.

At the palace, Cabrera-Fuentes met numerous times with officials involved in Lopez Obrador’s lofty ambition to build a railway across southeastern Mexico known as the Trans-Isthmus Corridor, which could upend some global shipping routes and challenge the Panama Canal.

Cabrera-Fuentes had been living in Singapore, and the Mexican government hoped to enlist him to attract investment from the Asian financial power, according to Hazael Matus Toledo, the mayor of El Espinal, who said he attended meetings between senior government officials and the scientist-turned-spy.

“The last meeting was to be on a Tuesday. He was arrested on a Sunday,” Matus told OCCRP.

It is unclear how the government of Lopez Obrador connected with Cabrera-Fuentes, or exactly what role he was playing in the development of the rail project. However, the Trans-Isthmus Corridor is widely seen as a bid by the populist president to attract Asian investment, and a potential threat to U.S. hegemony in the region.

The office of the president did not respond to requests for comment on Cabrera-Fuentes’s relationship with the Mexican government.

The extent of the scientist’s political connections in Mexico has not previously been reported, but much ink has been spilled since his arrest in 2020, especially as details filtered out about allegations of espionage and his secret other family in Russia.

For those in Mexico who respected his scientific achievements and knew of his charitable work helping reconstruct earthquake-damaged areas and funding study abroad, it’s hard to accept the accusations against him.

“It’s a vile lie,” insisted Román Cruz Ortiz, a chemical engineer who became Cabrera-Fuentes’s mentor after meeting him when he was a 16-year-old high-school student interested in science.

Cabrera-Fuentes pleaded guilty in February and was sentenced to four years in a U.S. prison for working as an unregistered foreign agent, helping Russia spy on an informant in Miami from March 2019 to February 2020. That informant had shared information about Russian intelligence services with the U.S. government.

These few details were outlined in an FBI affidavit in support of the criminal complaint in February 2020. It also revealed that Cabrera-Fuentes, 37, told FBI counterintelligence officers that he had two wives and two sets of young children, one in Mexico and another in Russia.

The FBI described Cabrera-Fuentes as a “co-optee,” used by a Russian intelligence officer to provide “a layer of obfuscation” between himself and the target.

But most information about his arrest at the Miami airport remains classified, hidden from the public for reasons of U.S. national security under the Classified Information Protection Act. The target of the espionage, the reason he was asked to spy on the target, and even the locations in Miami where it took place, were even kept from his defense attorneys and remain secret, OCCRP has reported.

Cabrera-Fuentes is now serving his sentence in South Florida, but could be released within a year on good behavior. He has not spoken to the media since his arrest. Through his attorney, he declined an interview with OCCRP.

“I think the four-year sentence reflects that the court acknowledged itself that the humanitarian and scientific contributions were on a societal level very, very important,” said his lawyer, Ronald Gainor.

Cabrera-Fuentes’ legacy remains strong in his hometown of El Espinal, where people still remember his good works and admire the intellectual prowess that saw him publish more than 100 academic papers. At the time of his arrest, he was conducting research on heart disease funded by a joint grant from Duke University in North Carolina and the National University of Singapore. 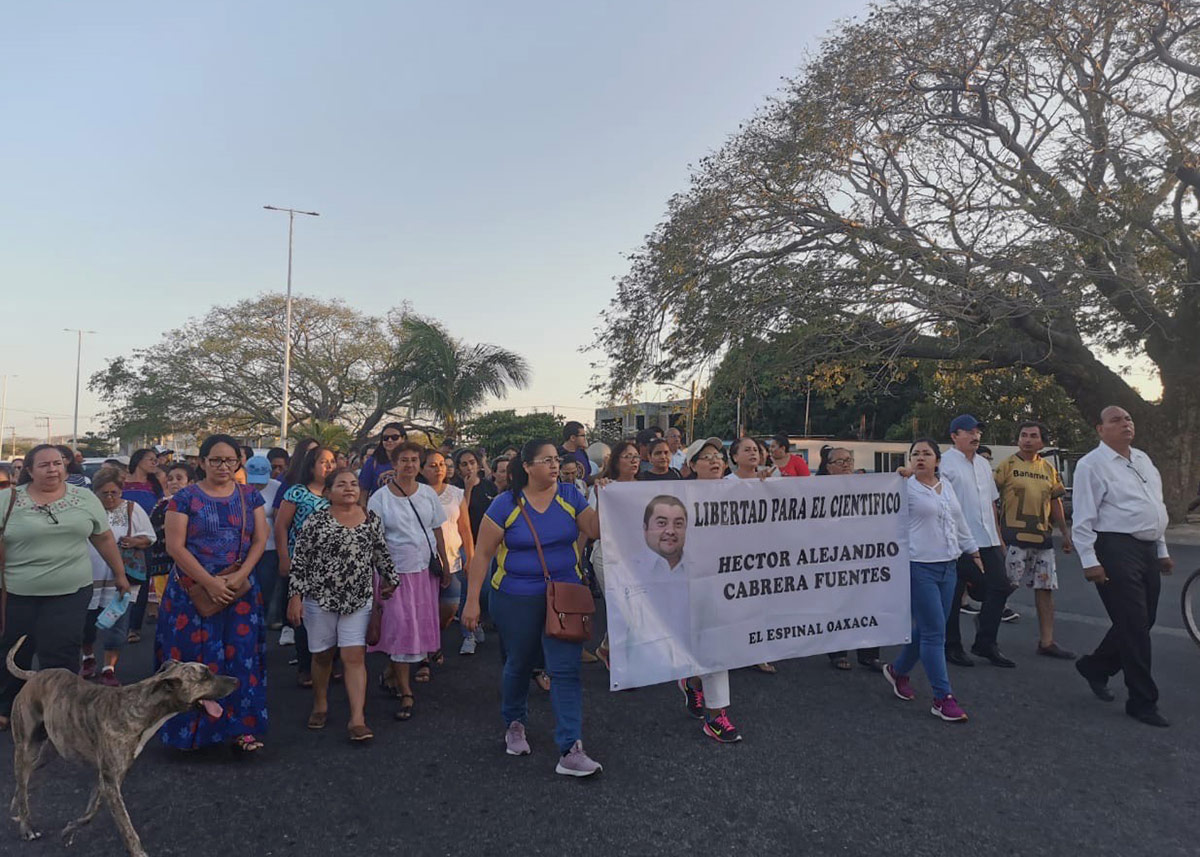 But most of Cabrera-Fuentes’ political allies have now abandoned him.

Oaxaca Governor Alejandro Murat once showered Cabrera-Fuentes with praise when the scientist headed a team that developed a new cream to treat ulcers, burns, and other wounds. At one point, Murat even provided a helicopter to transport scientists to a meeting in El Espinal.

But El Espinal Mayor Matus said Murat refused to intercede with federal authorities on behalf of Cabrera-Fuentes once he had been arrested. (Murat declined to comment.)

Matus said he traveled to the capital, Mexico City, to appeal to Foreign Secretary Marcelo Ebrard to weigh in on Cabrera-Fuentes’ case. But when he showed up for his appointment and told staff he was there to speak about Cabrera-Fuentes, the meeting was canceled and he was told: “It is a delicate issue, friend.”

Cabrera-Fuentes has even vanished from the website of the Technological Institute of Monterrey, one of Mexico’s leading universities, where he was coordinator for the Center of Biotechnology.

But some friends and colleagues dismiss the spying accusations entirely.

The Americans wanted to silence Cabrera-Fuentes, because they considered him “a threat” due to his scientific achievements, especially his work on cell regeneration in heart attack victims, said his former mentor, Cruz.

"Let's say that they saw him as a danger, just as has happened with many characters in history who have contributed a lot to science,” he said in an interview at a rustic restaurant in nearby Ixtaltepec. 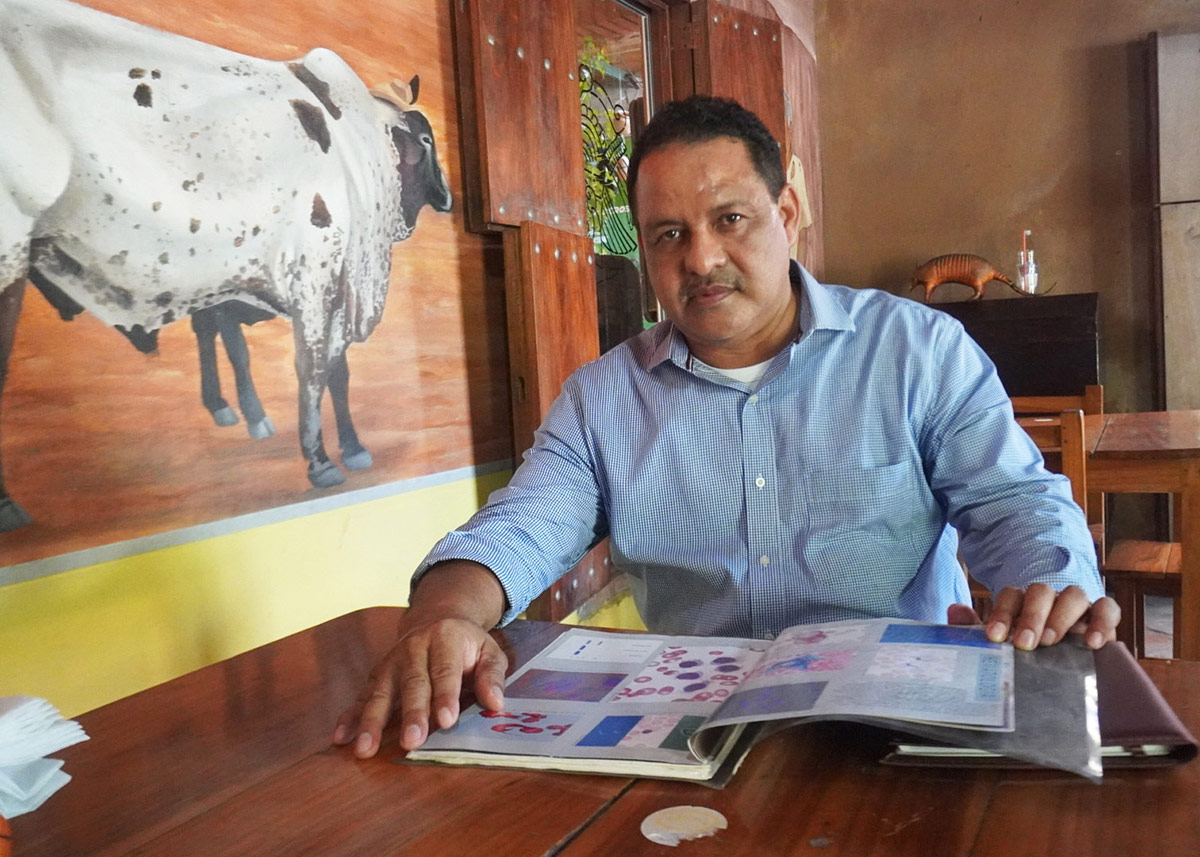 "I know Héctor's human quality, I know his intellectual and professional capacity, I don't believe and I will never believe what they accuse him of,” Cruz added.

Cruz recalled how the knowledge-hungry high school student had approached him for help learning more than his teachers could offer.

"He came to ask for support to learn about chemistry," he recalled between sips of mineral water. From that day on, he helped Cabrera-Fuentes study every Saturday from 4:30 am until 8 am.

The tutoring led to a lifelong interest in molecular biology, and Cabrera-Fuentes went on to study at Benito Juárez Autonomous University of Oaxaca. He then attended the University of Puebla, where he won a scholarship to study medicine in Russia.

It was in Russia that Cabrera-Fuentes met Aliya Valeyeva. They married sometime between 2005 and 2010 in the eastern city of Kazan, where he was studying, and photos show the couple in ceremonial garb of the Tartars, the main ethnic group in the region.

Valeyeva was with Cabrera-Fuentes when he studied for his PhD in the German city of Giesen. She went to Russia with their children for a visit and was prohibited from returning to Germany, according to the FBI affidavit. This was how Russian intelligence was able to blackmail him into spying.

Cabrera-Fuentes’ cell phone showed that there had been interaction between him and a Russian handler. The handler promised to help Cabrera-Fuentes get his wife and their daughters out of Russia, according to the affidavit.

Cabrera-Fuentes agreed to the deal, and went to Miami on a business visa to gather information on the target of the Russian espionage, a person who had previously passed intelligence to the U.S. government. Traveling with him was his Mexican wife, Evelyn Dehesa Martínez.

The charging documents said the Russian handler instructed Cabrera-Fuentes, through an associate, to rent a condo in the complex where the target lived. He was given $20,000 for rent and a down payment toward the costs.

The couple worked together to surveill the target, and photographs of the target’s license plates were found on Dehesa’s phone, according to the indictment against Cabrera-Fuentes.

Dehesa has not spoken since her husband’s arrest, and records show she was allowed to return to Mexico without facing U.S. charges. The FBI has declined to provide details about what role she might have played in the espionage.

Dehesa declined an interview request. Cabrera-Fuentes’ Russian wife did not respond to requests for comment sent via LinkedIn and the Russian social media site VK.com, where she posts as Aliya Cabrera-Fuentes.

Before the sentencing in June, Cabrera-Fuentes’ parents and siblings sent letters of support attesting to his good character and asking for leniency. But they told OCCRP they did not want to discuss the case any further.

“We are not open to making any comments considering that at this point the first person who should do so is Héctor himself before the rest of the family,” his sister said in an email.

To Cabrera-Fuentes’ friends and other members of his family, his entanglement in an international espionage case is at odds with everything they know about the brainy child who followed his passion for science into adulthood.

Cabrera-Fuentes was raised in a red-gated house that shared a patio with relatives on his mother's side. Among them was his cousin Rusbelt Fuentes, who is now the director of the non-profit group For Oaxaca + Researchers, which was founded by Cabrera-Fuentes and promotes young scientists in El Espinal and across the state. 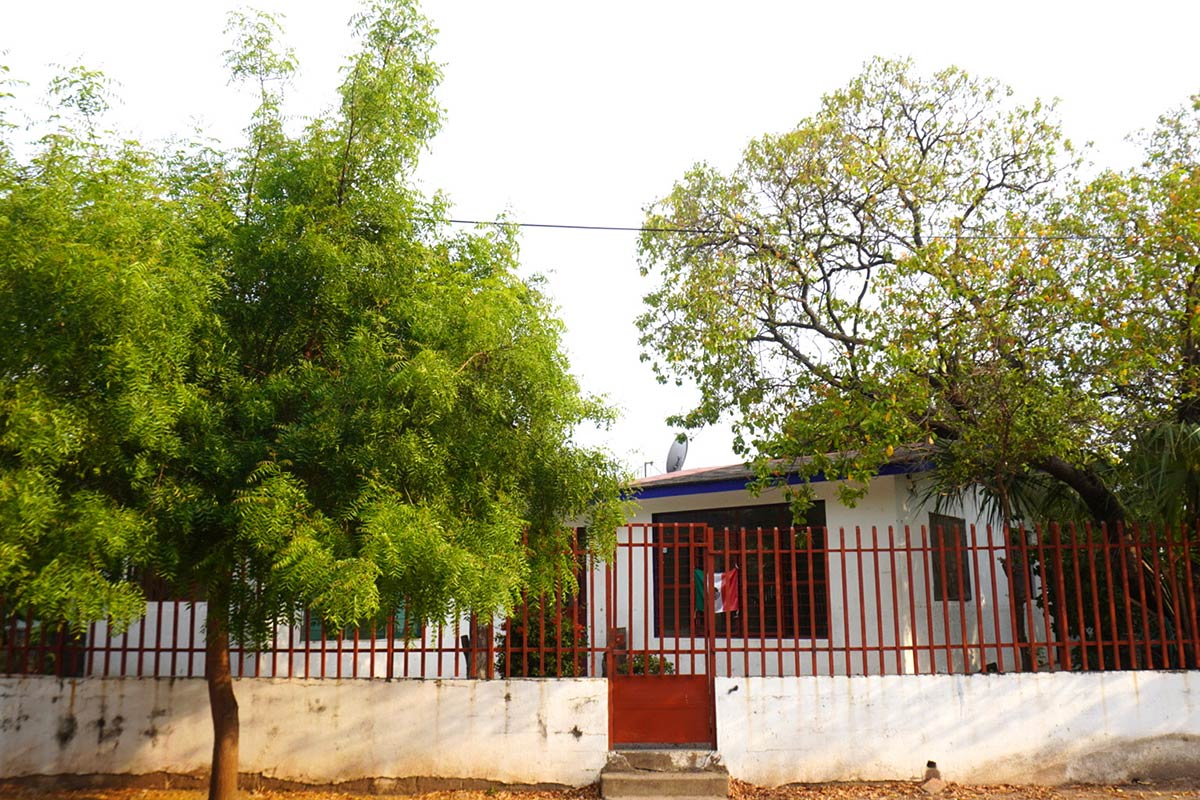 Fuentes said his cousin was particularly inspired as a child by a book about pioneering scientists who discovered microbes and invented vaccines to combat them, saving millions of lives.

"He tells that story, that at age 11 he read 'Microbe Hunters' and it blew his mind," Fuentes said in an interview on his patio in El Espinal, taking shade from the scorching mid-day sun.

Juan Alpuche, a scientist close to Cabrera-Fuentes, said his friend could only have been drawn into espionage against his will, in order to protect his family.

“But premeditated? I don't think so,” Alpuche said.