Panama Papers’ Source ‘John Doe’: ‘The Revolution Will Be Digitized’ 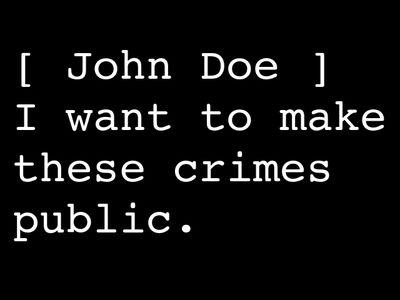 The anonymous source of the Panama Papers leaks, “John Doe,” released a strongly worded manifesto in response to government inquiries into the data leak. The statement, shared on Thursday with OCCRP by the German newspaper Süddeutsche Zeitung, called for reform of the system and greater protection for whistleblowers, and further explained the source’s reasons for the leaks.

The revelations have put the issues of tax evasion and financial transparency on the front burner in countries as diverse as Sri Lanka and Canada. The day before John Doe released the statement, President Barack Obama had announced measures to combat money laundering, corruption and tax evasion, specifically mentioning the Panama Papers.

The new White House administrative measures include a rule that would require financial institutions to identify beneficial owners as well as strengthening the customer due diligence obligations of those financial institutions. The administration also proposed legislation providing additional tools for fighting transnational corruption and called on Congress to approve tax treaties with other countries to enable US law enforcement to obtain information on financial accounts from those countries.

But will it be enough?

The Panama Papers caused a storm of worldwide reaction after publication by a network of more than 400 journalists around the world. Launched by the International Consortium of Investigative Journalists (ICIJ) in partnership German newspaper Süddeutsche Zeitung, the Organized Crime and Corruption Reporting Project (OCCRP) and other major news organizations around the globe, the Panama Papers exposed the offshore assets of the world’s dictators, high-level government officials, business tycoons and criminals.

Iceland’s Prime Minister Sigmundur David Gunnlaugsson was toppled in the wake of revelations that he held significant investments and bonds of major Icelandic banks through an offshore company. Meanwhile, one of the closest members of Russian President Vladimir Putin’s circle, cellist Sergei Roldugin, has been implicated in billions of dollars in offshore transactions and has been linked to the fraudsters implicated in the alleged murder of anti-corruption whistleblower Sergei Magnitsky.

UK Prime Minister David Cameron was exposed to calls for his resignation after he finally confessed he benefitted from a Panamanian offshore trust set up by his father. Cameron announced today a plan to propose an international anti-corruption body to track down money laundering and tax evasion.

In the past several weeks, the United States, the UK, Australia, Austria, France, Canada and Sri Lanka have begun probes or set up special investigative units based on the revelations in the Panama Papers.

The Panama Papers leaks originally came to Süddeutsche Zeitung when they received an enigmatic anonymous message: “Hello. This is John Doe. Interested in data?”

Today, “John Doe” speaks to the world about why the documents were leaked and what the source believes needs to change.

“Income inequality is one of the defining issues of our time. It affects all of us, the world over,” the statement begins. John Doe says the Panama Papers provide a compelling answer as to why income inequality has greatly increased.

John Doe criticizes the system itself as favoring the interests of criminals. The source says that although shell companies are not illegal they are used to carry out “a wide array of serious crimes” beyond simply evading taxes.

“I decided to expose Mossack Fonseca because I thought its founders, employees and clients should have to answer for their roles in these crimes,, only some of which have come to light thus far,” John Doe said. “It will take years, possibly decades, for the full extent of the firm’s sordid acts to become known.”

John Doe has denied working for any government or intelligence agency, expressing that the motive for leaking the documents and the opinions are entirely his or her own and an act against what is perceived to be injustice and the necessity to reform the global economic and legal systems.

The source also spoke out against the plight whistleblowers face when they reveal “obvious wrongdoing.” John Doe defended US National Security Administration whistleblower Edward Snowden, currently exiled in Moscow, as the US government seeks to prosecute him under the Espionage Act.

John Doe believes Snowden “deserves a hero’s welcome and substantial prize, not banishment.” The source cites the bleak fates of other whistleblowers such as Swiss Leaks Bradley Birkenfeld, who was given a prison sentence, and Lux Leaks Antoine Deltour, who is currently on trial and who could face up to 10 years in prison.

“Legitimate whistleblowers who expose unquestionable wrongdoing, whether insiders or outsiders, deserve immunity from government retribution, full stop,” John Doe wrote. The statement called on “all nations to take swift action not only to protect whistleblowers, but to put an end to the global abuse of corporate registers.”

The source proposed total transparency in corporate registers, arguing that they should be freely accessible in the European Union and that the United States needed to set standards for disclosure and public access of corporate data across all 50 states.

The individual also criticized the failure of American democracy in cleaning up the system and called for a reform of the US campaign finance system. “Tax evasion cannot possibly be fixed while elected officials are pleading for money from the very elites who have the strongest incentives to avoid taxes relative to any other segment of the population.”

John Doe also criticized the “revolving door” where high-level anti-corruption and law enforcement officials often move to work for the very financial institutions that need to be investigated and held responsible for their malpractices.

John Doe criticized the failure of the banks, the media, the legal profession and the financial and justice systems the world over for their failures in stemming these problems.

The writer claims capitalism is “tantamount to economic slavery.”

“[W]hen it takes a whistleblower to sound the alarm, it is cause for even greater concern. It signals that democracy’s checks and balances have all failed,” John Doe wrote.