Interview With Veaceslav Platon: ‘There are zombie banks in Moldova’

The following are excerpts from a three-hour interview with Veaceslav Platon, a key figure in a Moldovan investigation into banking corruption. 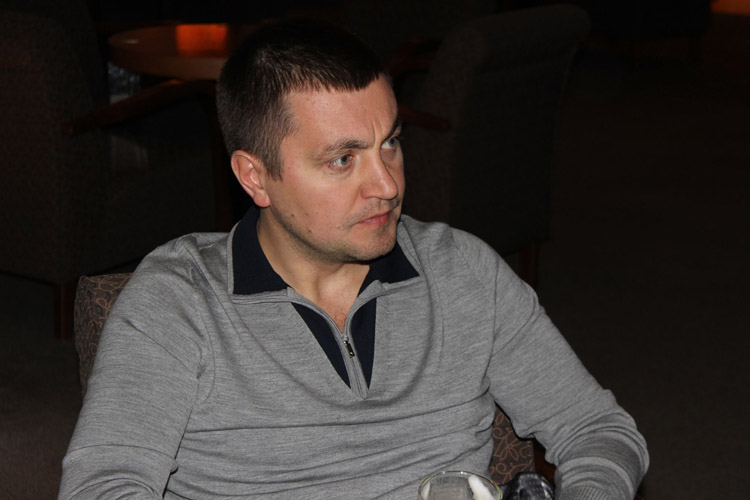 Veaceslav PlatonReporters from OCCRP partner RISE Moldova met Platon in a luxury hotel in downtown Kiev, the capital of Ukraine. The interview took place in March, four months before Moldovan authorities placed Platon on a most wanted list for his alleged involvement with the thefts and the money laundering in the Moldovan banking system.

Dressed modestly in a grey shirt with black collar and dark jeans, the wanted banker and former Moldovan politician sat in the bar inside the Hyatt Hotel. For hours he answered questions about his personal interest in the Moldovan banking sector, the notorious US$ 1 billion Moldovan bank fraud and the even more massive US$ 20 billion Russian Laundromat.

Reporter: Mr. Platon, you haven’t been in Moldova in quite some time.

Veaceslav Platon: I was in Moldova last time in February 2014…

Reporter: Why haven’t you returned since?

Veaceslav Platon: Because there’s no rule of law in Moldova, no order, no justice. There’s nothing. Moldova is a sort of an Islamic State (ISIS) in the center of Europe. It’s a lawless place.

Reporter: But there is an European integration process, an adjustment of legislation…

Veaceslav Platon: The problem is that laws and reality are two different things. They are not connected. You can adopt new laws but they don’t function. I mean there are two realities. A virtual reality and life. The virtual reality are laws, Parliament, the president, the government… But there is a reality.

Reporter: Is it a system or just one person?

Veaceslav Platon: Of course, a system but in fact one person.

Reporter: Who is that?

Reporter: Two years ago, you talked about the Moldovan banking system. [In 2014, Platon addressed the Parliament in Chisinau as a legal representative of an offshore company, Volmark Trade Ltd. The offshore used to be a  shareholder of Victoriabank, another Moldovan bank, and Platon was unhappy that the National Bank of Moldova (NBM) blocked his attempt to restructure the board of  Victoriabank, in which he owned shares.]

Veaceslav Platon: Yes, I did. I told them that there are zombie banks in Moldova and nine month later, this surfaced. These are the three banks that are now in the liquidation process [The banks from which the US$ 1 billion was stolen; Banca de Economii, Unibank and Banca Sociala].

Reporter: Was it possible to have prevented the fall of the three banks?

Veaceslav Platon: I wrote then to the president, to the Parliament. No reaction. Why aren’t they today asked about this?...

Reporter: After the US$ 1 billion theft, a cleaning process has begun. What do you think about this?

Veaceslav Platon: The so-called cleaning, purification of the banking system is for fools. In reality this is about gaining absolute control over the banking system and about taking over two big banks, Moldova-Agroindbank (MAIB) and Moldindconbank.

Reporter: How is this suppose to happen?

Veaceslav Platon: The scenario is the following. The takeover process started a long time ago and in the past two years, with the pretext of cleaning, they are adopting the necessary laws. These laws are necessary to be able to take over any bank in the country. They announce to the fools that there is a fight against non-transparent shareholders but in reality they are taking over the banks helped by the Moldovan National Bank and law enforcement.

Reporter: Do you have investments in European Union countries?

Veaceslav Platon: I work in the markets I know. It is useless to work in a market  you do not know and where you do not represent anything.

Reporter: What about Baltic countries, you have business there?

Veaceslav Platon: Sure, in the industry. Why are you asking me this? Tomorrow the cavalry from the Center [National Anticorruption Center] would come after me with questions. I have industrial assets in Russia, Ukraine and Latvia. Not in Moldova, where everything is destroyed.

Reporter: And is it better in Russia?

Veaceslav Platon: It's very good. In Russia, if you have industrial assets you also have support, invitations, all sorts of privileges. In the last seven to eight years the state has greatly changed its attitude towards business.

Reporter: And where is easier to do business?

Veaceslav Platon: In Latvia and Russia.

Reporter: You said that someone would be interested in linking your name to money laundering in Moldova.

Veaceslav Platon: I'm sorry to say this, but you are all a bunch of losers. Have you read the Criminal Code? You have not read anything, you just heard ... You don't know what is money laundering. If you still have to learn, I will explain: It is a way of legalizing illegally obtained revenues. It must be preceded by another crime, as a result of which were obtained illegally properties... Because I have been accused, I delved into the subject… In countries where there is no free movement of capital and there are restrictions, people use different channels to withdraw funds which may be legal, partly legal or completely illegal. But this is not about money laundering. Yes, it is the withdrawal of capital for that country. But the host countries, such as the Baltic countries or Cyprus, have only benefits from this, as they attract financial capital.

Reporter: In the Russian money-laundering case, many companies listed in the investigation are connected with you. What (connection do) you actually have with these companies?

Veaceslav Platon: It is nonsense. Terrible things happen in Moldova. People are deprived of justice, freedom, are imprisoned, taken hostage ... and nobody sees. Unfortunately, people are being shown enemies, villains to distract them with useless things. Rather than investigate the disappearance of the billion [stolen in 2014 from Moldovan banks], they are told about US$ 18 billion, which allegedly had been laundered through Moldova.

Reporter: In Latvia it is scandal after scandal regarding banks' participation in the Laundromat.

Veaceslav Platon: It is because of the hassle caused by the Moldovan side. Understand? Such processes are still taking place in the Baltic countries. A lot of Russian businessmen keep their funds there, then withdraw them. And that does not cause any panic. Why? Because they encourage the entry of money from other countries, where the foreign exchange legislation is tougher and people prefer to keep their money abroad. That's called a financial investment. I see here another problem: why from this 18 billion, at least 10-20 percent hasn't remained in Moldova for country's development or for investment?

Reporter: Why hasn't it?

Veaceslav Platon: Ask around [the authorities].

Reporter: There are times when people do not even know that they hold shares in banks. Their signatures are forged and their name are used to set up offshore companies. These companies then buy shares in banks. What do you know, for example, about Ukrainian citizens who bought small packages of shares in Moldova Agroindbank and Moldindconbank?

Veaceslav Platon: Let me explain how it all began. [The] Moldovan market has its specifics. For example, you should know that, until 2007, all banks in Moldova belonged to a small group of people. The explanation is very simple. All belonged to some offshore companies, the executives were changing each other and the legal address was the same. Such situation appeared because in Moldova, the sale of offshore companies was managed by a single company-founder, which, in order not to complicate things, put the same founders all over the place. In 2007, the National Bank reviewed all banks, saw that they are founded by the same people and that means all banks are affiliated. Later, the National Bank called for the elimination of these offshore companies. Now, for example, the same company registers companies to five nominal persons and, in their names, are registered sometimes thousands of companies with the same address. And no one asks questions. Therefore, what happens when you search is that you can detect that a woman is the nominal owner of tens of thousands of companies: from oil wells in Russia, a bank in Moldova, a metallurgic plant in Ukraine, and you arrive at the conclusion that they are all connected. That, even if these companies do not even know one another. These companies are made like bread, and the woman who is the nominal owner took 1,500 dollars for documents, put her signature on the power of attorney renouncing the shares and does not even want to hear anything about it.

Reporter: You said earlier that you are working within the law. Is it complicated?

Veaceslav Platon: That's how everybody works. In the Western world it is quite normal. Judicial practice is changing. The same things are interpreted differently by police, courts. For this, you should always be aware of changes, study the laws consistently.

After interviewing Veaceslav Platon, RISE reporters met in Kiev with people used to front for the beneficial (true) owners of offshore companies that own shares in  MAIB. Platon called the journalists after a few interviews.

Veaceslav Platon: So, here we go - you are still walking around, photographing houses, disturbing people, trying to give me trouble. On the other hand, I meet with you and give you information on certain documents. So, that means you take information from one person, then another, from the third party, and then you are trying to hit us. So you get everything you need. Consequently, we are all put in a stupid situation. I reflected and I think that we could be useful to each other. I give you information, and you in one way or another you should treat me loyally.

Correction:  This story has been corrected to reflect the correct shirt andcollar color.  OCCRP regrets the error.