For the first time, a Slovak court is sending high-level politicians to prison for corruption. 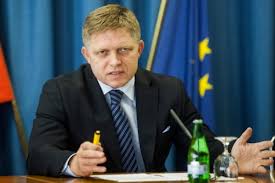 Prime Minister Robert Fico (Photo: MGlen, CC BY-SA 3.0) and Igor Stefanov, who succeeded each other at the Construction and Regional Development Ministry, were convicted on Wednesday of manipulating a US$ 141.7 million tender for legal and advertising services for thee ministry to ensure that firms close to ultra-conservative Slovak National Party (SNS) would win it, news service Bloomberg reported.

The two politicians, who served in the cabinet of Prime Minister Robert Fico between 2006 and 2010, posted the tender on only one bulletin board which helped the consortium to emerge as sole bidder.

According to newspaper The Sun Daily, the presiding judge said on Wednesday in sentencing them that the ministers "acted contrary to the principle of transparency" by considerably narrowing access to the tender.

They were fined US$ 35,000 each on top of the jail time. Both said they were appealing

SNS was part of a coalition led by Prime Minister Fico from 2006 to 2010 and then joined the government again last year.

The court verdict satisfied demands of anti-corruption marches that took place three times this year. Protesters denounced the government's failure to curtail corruption and petitioned for a full investigation into recent cases.

They also called for the resignation of Interior Minister Robert Kalinak, Police Corps President Tibor Gaspar, and Special Prosecutor Dušan Kovacik. Kalinak is accused of ties to a real estate company suspected of fraud. He admitted to owning shares in the company but denied the allegations. Gaspar and Kovacik have come under fire for feeble efforts to combat corruption.

A report by the World Economic Forum found that Slovakia and Ukraine share second place as the most corrupt country in Europe, after Moldova.