In the latest crackdown on violent organized crime groups, Mexican security forces arrested the leaders of two drug cartels, prompting members of their gangs to block roads and shoot at government buildings in retaliation. 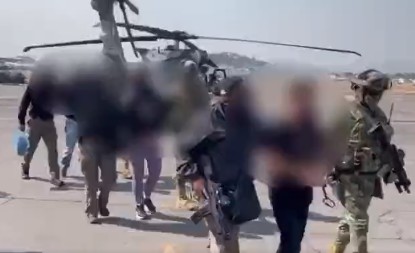 Treviño Chávez is wanted by the United States for drug trafficking and money laundering. His cartel is a splinter cell of the feared Los Zetas. The Northeast Cartel arose in key northern and central Mexican states. El Huevo is allegedly the most powerful leader of the highly-fragmented Los Zetas, as well as of his faction, InSight Crime reported.

Jarquín Jarquín reportedly has brought tonnes of cocaine, fentanyl and other illicit drugs into North America through the Pacific coast state of Colima, according to a U.S. Department of the Treasury statement.

Jalisco and Colima states have been the bastion of the Jalisco Cartel New Generation (CJNG), while the Manzanillo city and the surrounding areas turned into one of the cartel’s most attractive drug trafficking routes towards the U.S.

The “CJNG’s criminal success is partly due to its influence over strategic locations such as Manzanillo,” said OFAC Director, Andrea M. Gacki.

“This Pacific coast port serves as a significant gateway for Colombian cocaine and precursor chemicals imported from Asia, including those used to synthesize fentanyl for ultimate distribution in the United States,” she explained.

Jarquín Jarquín and his brother José Jesús Jarquín Jarquín were labeled as senior members of the cartel. The two were allegedly reporting to the son-in-law of CJNG boss Nemesio Oseguera Cervantes, alias El Mencho. Today, he is one of the most wanted people and the U.S. has put a US$10 million bounty on him.

The cartel has been linked to numerous violent incidents. Mexican authorities believe that a recent internal rivalry led to a funeral massacre of at least 17 people in Michoacán.

Jarquín Jarquín’s allies set on Sunday trailers and trucks on fire, blocking the main streets of Colima city. A day later, Treviño Chávez’s gunmen carried out attacks on the United States Consulate in Tamaulipas state as well as on the building of the Secretary of the National Defense of Mexico. They also set roadblocks with burning vehicles, local media reported.