The United States levied sanctions on Monday against 23 Belarusian individuals and 21 entities close to President Alexander Lukashenko’s regime, accusing it of repression and widespread corruption. 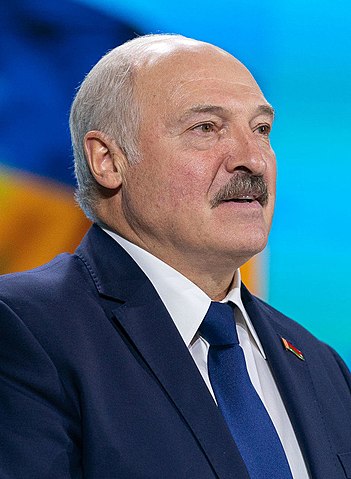 The United States levied sanctions on Monday against 23 Belarusian individuals and 21 entities close to President Alexander Lukashenko’s regime, accusing it of repression and widespread corruption. (Photo: Администрация президента Украины, Wikimedia, License)The move came on the one-year anniversary of Lukashenko’s election victory, which was mired by domestic and international claims of fraud.

The sanctions target those involved in the violent suppression of human rights as well as those who have benefited from the corruption found in Lukashenko’s regime.

A statement released by the U.S. Department of the Treasury refers to some of the sanctioned persons as “wallets” - meaning the U.S. sees their financial support as invaluable to furthering the president’s corruption efforts.

Most of the targeted persons are businessmen from the energy, tobacco, and construction industries. In exchange for financial backing and public support of Lukashenko, they have benefited from lucrative contracts and other preferential treatments signed off by the president himself.

U.S. Treasury Secretary Janet L. Yellen said the measure was a response to Lukashenko’s “brutal campaign of repression to suppress democracy” and that the people of the United States, Canada, the EU and the U.K. “stand with the people of Belarus.”

Among those sanctioned is Aliaksey Aleksin, who was the subject of an OCCRP investigation into the rise of his influence, wealth, and power; as well as his close relationship with Viktor Lukashenko, the president’s eldest son.

Aleksin controls a vast fortune in the tobacco industry and has a near total monopoly on the production and importation of all tobacco products in Belarus, thanks to Lukashenko’s favor.

Lukashenko had even re-drawn the boundary lines of Minsk, the country’s capital, to allocate land for one of Aleksin’s factories, reasons for which the U.S. Department of the Treasury assume are for tax evasion.

Another of Aleksin’s former companies - still controlled by his sons and wife - has been granted exclusive privileges to control the country’s national traffic system. In effect, Lukashenko has made it so that Aleksin’s family runs Belarus’ entire cargo transit network.

Another businessman named is Mikalai Varabei, a Belarusian oligarch from Lukashenko’s inner circle. His financial support to the regime has been rewarded with one of his companies being granted exclusive control over all coal transports within Belarus.

OCCRP has linked Aleksin and Varabei through their business dealings in Belarus. Varabei was sanctioned in December last year due to one of his firm’s status as a “company that has enjoyed tax breaks and other forms of support from the Belarusian administration,” according to the European Commission.

Among the targeted companies is a firm with connections to Serbia’s Karíc family, which was granted land worth almost US$800 million for a single project. They have also received generous tax breaks and the privileged use of state resources.

The Karíc family has shown their support to the president by granting their employees a day off to attend pro-Lukashenko rallies following his disputed election win and has continued to display strong public support for the regime.

OCCRP has previously investigated the Karić family’s ability to obtain construction contracts in Belarus worth in excess of $1 billion thanks to their close ties with Lukashenko, and how they skirted the EU sanctions that followed on their holding company.

Several people and institutions were sanctioned for their involvement in human rights abuses, such as violence and repression against peaceful Belarusian protestors, independent media, and political opposition.

This includes five Belarusian officials tied to the hijacking of Ryanair Flight 4978 on May 23rd earlier this year, when a Belarusian MiG forced the plane to land.

On route to Lithuania from Greece, the flight was intercepted over Belarusian airspace on orders from Lukashenko himself. After its forced landing in Minsk, it was revealed that the president had used a phoney bomb threat as a ruse; the real objective was to arrest Roman Protasevich, a journalist critical of the president’s regime.

A final mention on the list is the National Olympic Committee of the Republic of Belarus, which is run by Lukashenko’s son, Viktor.

Belarus came under fire during the recently completed Tokyo 2020 Olympics after Krystsina Tsimanouskaya, a Belarusian sprinter, was controversially removed from the team for criticizing the Belarus Olympic Committee and was almost forcibly put on a flight back home.

Now in his sixth term, and known in the West as “Europe’s last dictator” for his suppression of dissent, Lukashenko replied at a press conference with, “you in Britain can choke on these sanctions.”