The phrase food crime usually entails mixing watermelon and lentils or decorating a glass of milk with hot dogs. But an organized crime group in Spain may have given it a new meaning when it poisoned 27 people with illegally poached clams. 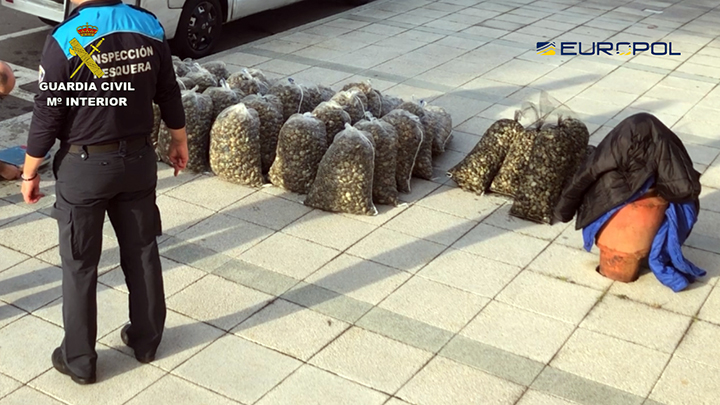 Illegally harvested clams are seen during a police seizure in early December 2019. (La Guardia Civil)Europol said on Thursday that 43 people were arrested and 11 companies were placed under investigation following the food poisoning.

Spanish police officers seized more than 40 tons of Japanese clams, estimated to be worth US$387,000, along with cash. They also raided several hideouts where criminals were keeping the clams in hatcheries.

The organized crime group is believed to have operated for at least a year, making $10 million from selling 1,100 tons of clams.

"The illegal clams were harvested in Portugal and then moved to Spain for the most lucrative seasons – the summer and the end-of-the-year holidays," Europol said in a statement. "After a brief clean up, the contaminated clams were sold in markets and restaurants. Washing the clam got rid of the bacteria (E. coli), but did not eliminate the viruses (Norovirus genogroup I and II and Hepatitis A)."

Those responsible for running the illegal hatcheries mixed contaminated clams with ones acquired legally and used false documents from Portuguese estuaries to make it difficult to trace their origin, Spanish police said.

The group then smuggled the clams from Portugal into the Spanish cities of Huelva and Cantabria, where the mollusks were purchased by local restaurants.