Australia’s former border security head will be the first witness called in the country’s inquest into corruption allegations regarding how the agency dealt with a high-profile casino company’s high-roller gamblers. 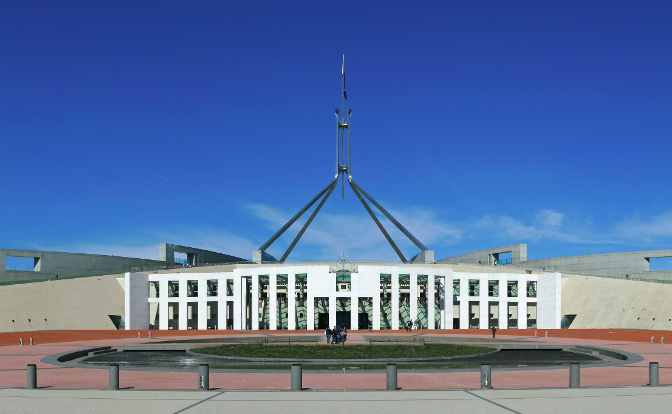 Australia's parliament is seen in 2008. (Courtesy John O'Neill)Roman Quaedvlieg, who was the head of Australia’s border security from 2015 until 2018 before being sacked for helping a girlfriend get a job with the force, claims he was lobbied by two ministers and another MP to help “smooth out” the border security process for Crown Resort’s big gamblers arriving from China.

Australia’s Commission for Law Enforcement Integrity, ACLEI, announced its list of witnesses on Wednesday regarding accusations against Crown Resorts.

It’s the first time the ACLEI will conduct a hearing in public.

“In the normal course of events, just like the police, we don't telegraph that we're coming. We don't say that there's going to be an investigation. We do it behind closed doors. We don't want to tip off people,” commissioner Michael Griffin told a government committeeTuesday.

“But in this matter the issue is already over, by and large - the allegations are known to everyone - so any criminality would have found another avenue by now,” he said.

The casino and hotel company, owned by billionaire James Packer, was alleged to facilitate money laundering and turn a blind eye to sex traffickers in a series of articles in July by The Age, 60 Minutes and the Sydney Morning Herald.

According to the investigation, high roller Tom Zhou was provided access to private jets, luxury hotel suites, gifts, tickets to Mariah Carey concerts as well as travel visas for associates.

In return, Zhou - who’s on Interpol’s “red notice list” - was expected to help bring in gamblers from China - which has strict rules on gambling promotion.

The casino and hotel company slammed the claims in an open letter, claiming they were unsubstantiated exaggerations or fabrications.

“As a Board, we are extremely concerned for our staff, shareholders and other stakeholders, as much of this unbalanced and sensationalised reporting is based on unsubstantiated allegations, exaggerations, unsupported connections and outright falsehoods,”  the board wrote.

It’s not the first time Packer has found himself embroiled in a corruption case.

The inquiry will play out against a backdrop of worsening law enforcement corruption across the country.

The ACLEI admits corruption inquiries into national law enforcement agencies have hit a record high, with the highest ever number of ongoing investigations.

“In particular, ACLEI has observed would-be corruptors seeking to groom law enforcement officers in order to exploit the privileged access and information they hold,” the report noted.

It points to online gambling as a contributing factor to corruption, as it isn’t as easy to track as gambling in public.