Fearing conscription by the Assad regime? Want to start a new life in Europe?

Surf online a bit, and you’ll find that a quick chat with the right people might just solve your problem.

Human smugglers in Syria have taken increasingly to the social media app TikTok in recent months to advertise their services, which include “traveling without borders” in luxury vehicles that breeze through the military checkpoints dotting the mountain highway from Damascus to Beirut. 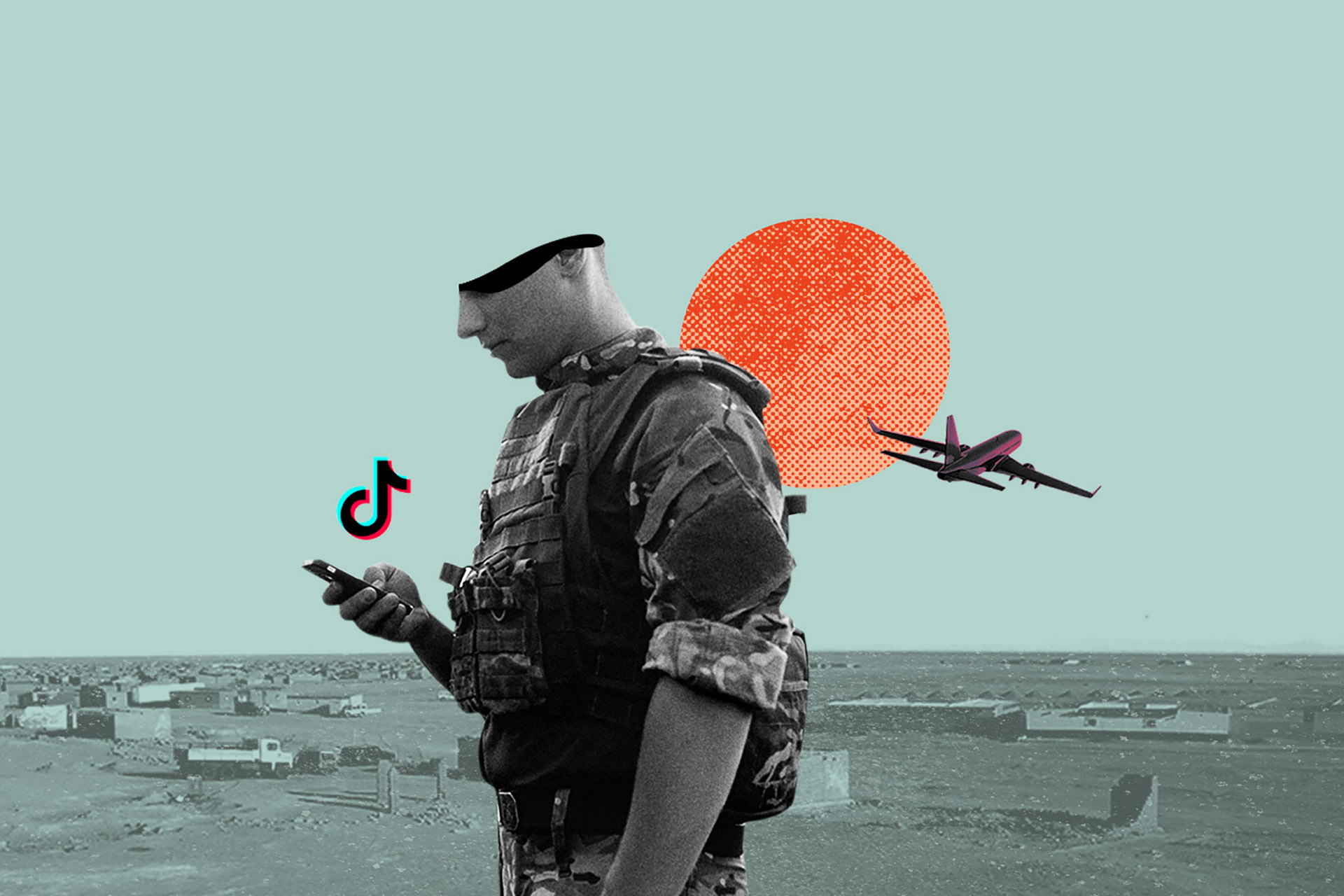 For US$3,000, one will even take you on a “private trip” all the way from Beirut to Greece — the main gateway into Europe.

“Our credibility is the secret of our success,” brags one promotional video posted on the platform, which is popular among younger audiences and used by over 800 million worldwide. Potential clients — including those wanted by the regime — are assured that the activity is completely “within the law.”

In one video, a line of luxury vehicles can be seen driving freely down the mountain road through the Lebanese-Syrian border. One shows a driver who appears to be wearing military fatigues beneath text advertising travel “from Homs to Beirut and back.” 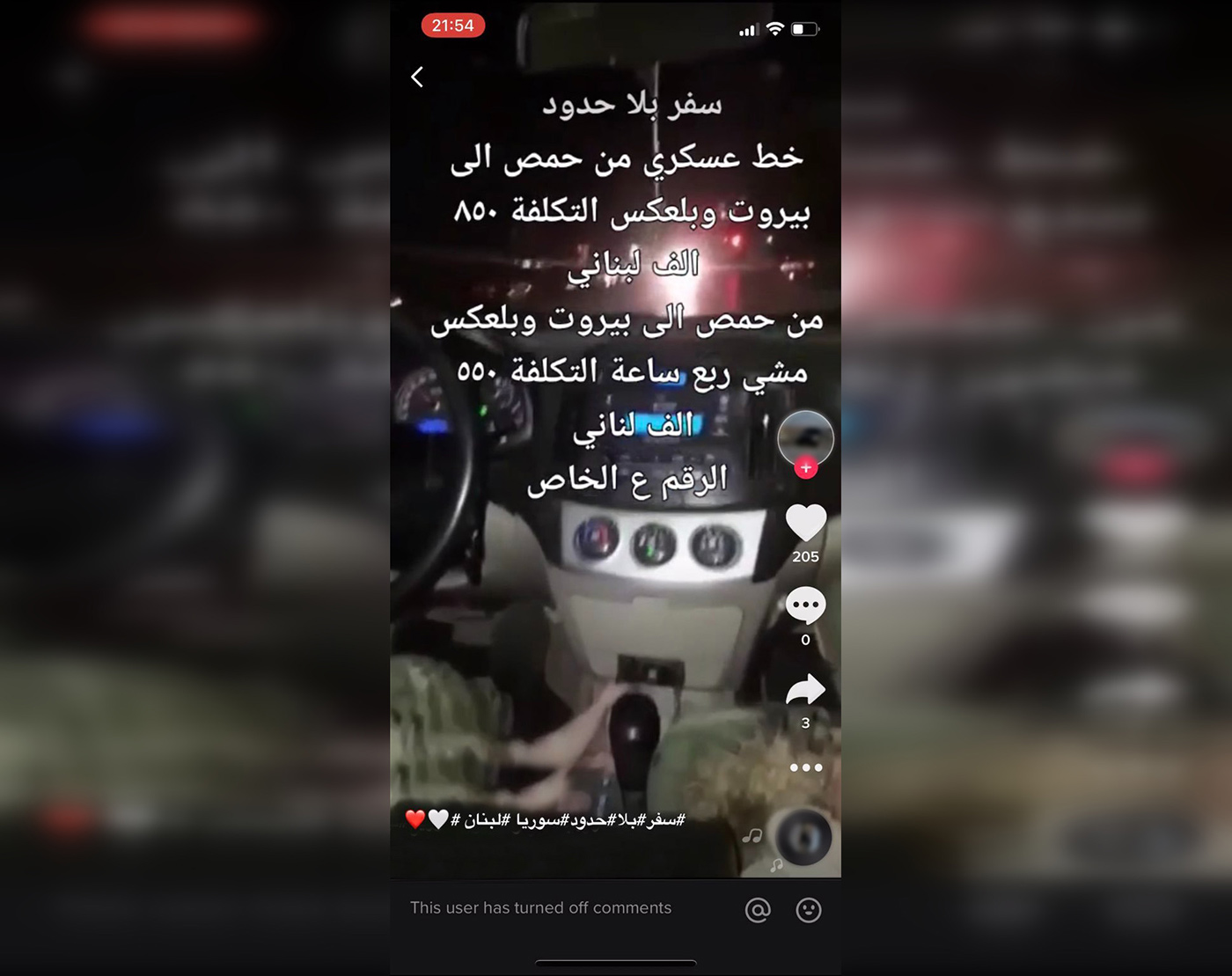 Another shows a soldier saluting a car as it passes through what appears to be a checkpoint leading towards the border. A third advertises travel to Greece from Beirut, over an image of a cargo ship in the middle of the ocean.

The Syrian Army could not be reached for comment.

One account known as “Al-Khal Travels” — viewed by OCCRP on February 3 — listed travel to Beirut from both regime-controlled areas such as Homs, for $150, as well as opposition-run areas such as Afrin in the north near the Turkish border, for $800.

TikTok has since banned the account, according to a company spokesperson.

Rami Zidan, Head of Video & Creative at TikTok MENA, told OCCRP that the company prohibits “the depiction, promotion, or facilitation of criminal activities, including human exploitation.”

"We work to ensure TikTok does not enable activities that violate laws or regulations,” he added.

But searching TikTok for the Arabic hashtags used by the now-banned account, such as  #Travel #Without #Borders, revealed two more accounts, one of which is still active, offering travel across the Syria-Lebanon border “without a medical test” — apparently an offer to help travellers cross without presenting a coronavirus test to border police.

The active account also offers travel to Turkey and Greece, major stops on the route for refugees and migrants seeking asylum in Europe. The same account also shows footage of people with luggage scrambling down a dirt road and offers to let clients “pay after arrival.”

In another video posted late last month, the smugglers, referring to themselves as “kings of the military road,” advertise a cheaper price for "civilian" clients wanting to be smuggled out of Syria, compared to those "wanted" by the regime. 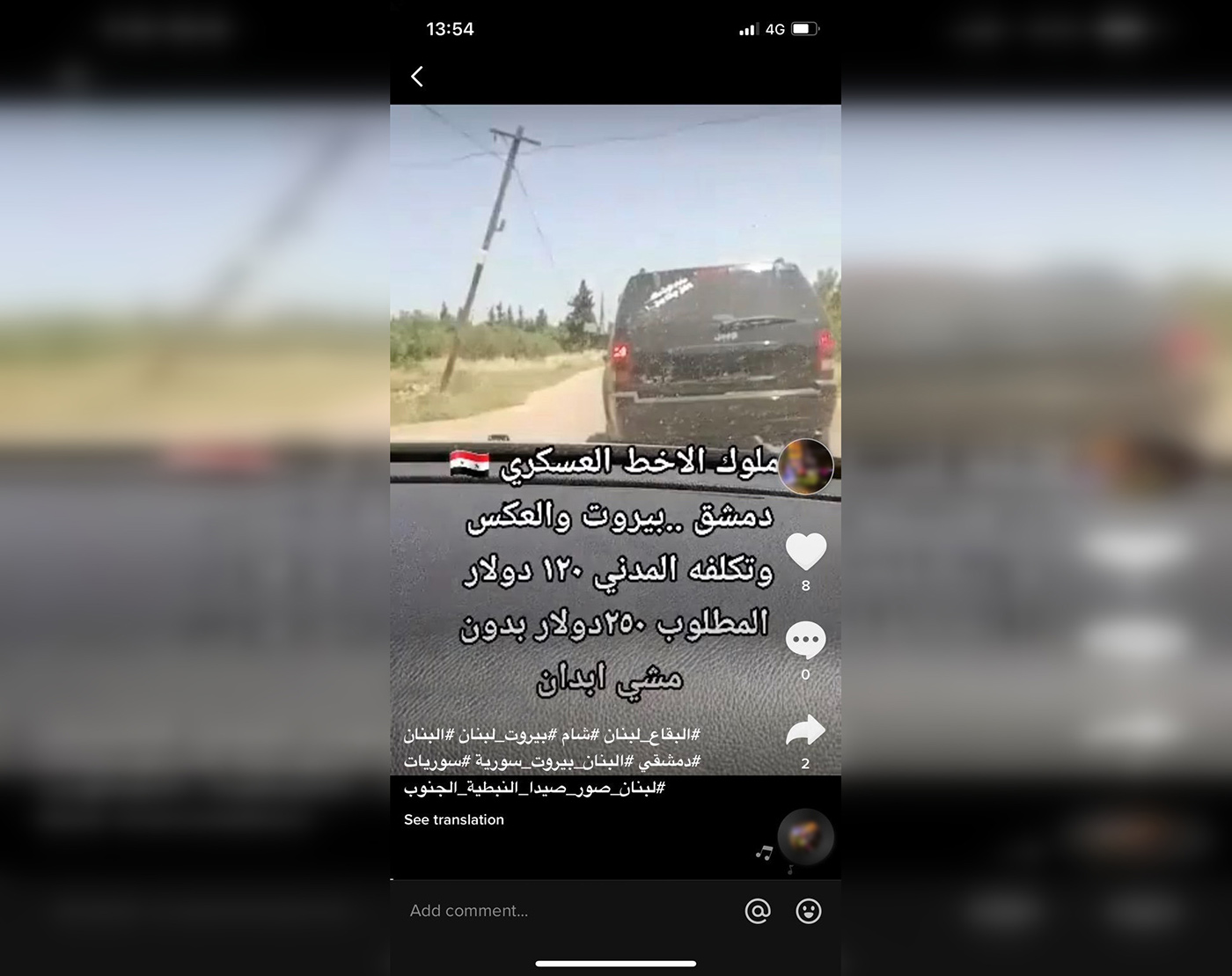 Advertisement on TikTok, saying “Kings of the military road 🇸🇾 Damascus.. Beirut and back. For citizens 120 dollars. For those wanted, 250 dollars without any walking at all”

Since 2011, Syria’s civil war has externally displaced over 6.6 million people, around 5.5 million of whom have found refuge in neighboring countries, including Turkey, Lebanon, Jordan and Iraq, according to UNHCR data.

Lebanon, host to over 850,000 refugees, has in recent years tightened restrictions on Syrians entering the country, who must now fulfill a certain criteria to be granted a temporary visa.

After contacting the smuggling service, OCCRP reporters were told that a “direct” journey from Damascus to Beirut would cost $250. The smuggler specified that the service was available to people wanted for military conscription or those in the reserve forces, but not those who deserted the military or members of the opposition.

The rates advertised by these TikTok accounts are extremely low compared to the prices charged by smugglers to journey through the mountains or other illegal routes, and the service flaunts flexibility in terms of pickup locations and routes.

Karam Shaar, a political analyst at the Middle East Institute, a US-based think tank, told reporters that advertising on social media, such as TikTok, at such low prices indicates how systematic smuggling operations have become.

“There are a series of arrangements that have to be made between people associated with the Syrian regime to smuggle a person across the border, in order for a blind eye to be turned to the person who is being smuggled and the driver who conducts the delivery,” he said. 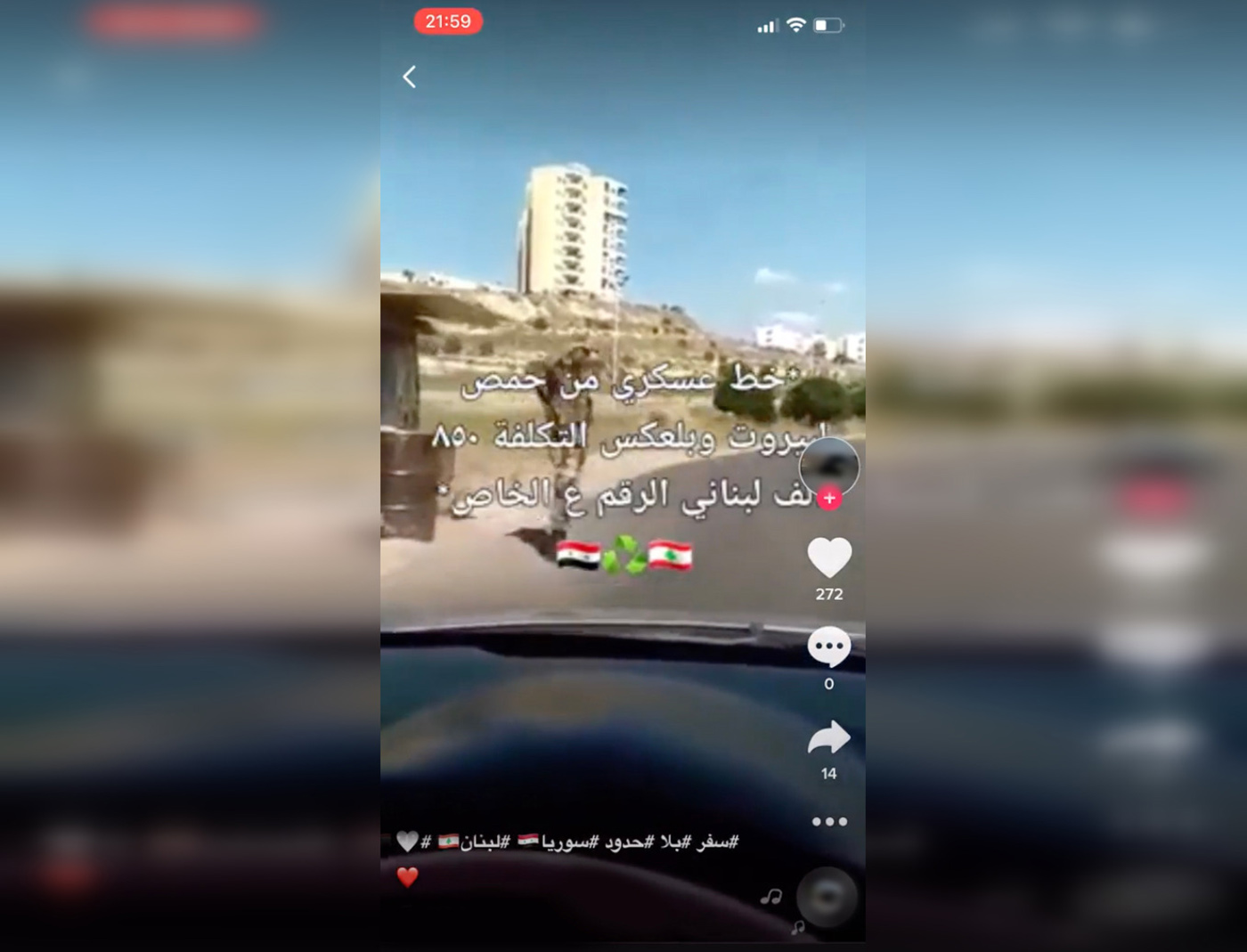 Screenshot from advertisement video with text saying, “Military line from Homs to Beirut and back for 850,000 Lebanese pound. Number privately”

He added that the increasing circulation of these videos on social media at the start of this year may be related to the mounting pressure on young Syrians to join the army more than a decade into the conflict.

This service, he said, is likely seen as providing a “safe haven” for those who do not want to join the military and cannot afford to pay the exemption fee, which recently shot up to approximately $8,000.

On January 25, 2019, the Syrian Ministry of Defense circulated lists of the names of more than a quarter of a million Syrians wanted for conscription in various governorates, the third such listing issued that month.

Under a recent amendment, authorities are allowed to seize the property of “military evaders” who fail to pay fines, Colonel Elias al-Bitar said in a video published in February by Syria’s Ministry for Media and Information.

“This is only the latest in a series of laws and policies designed to punish perceived political dissidents and Syrians who fled, but which also serve to enrich a flailing government with money from the pockets of disillusioned Syrians already facing a barrage of crises,” the watchdog said.

The Ministry of Foreign Affairs’ website states that if a person does not pay the conscription exemption fee, a notice is sent to the financial authorities to collect compensation, and the person’s name is published in a police circular for referral to the judiciary.

The Military Service Law also allows for the seizure of assets belonging to the evader’s wife or children if he is unable to pay.

Such pressures have left many with no choice but to find a way out.

One man who spoke to SIRAJ on the condition of anonymity said that he smuggled his 20-year-old son from Damascus to Beirut last year. The boy was arrested as a minor for participating in the 2011 anti-regime protests. By the time he was released, his parents had already fled to Europe.

To save his child from conscription, the man contacted a smuggler who moved people wanted by the regime from Syria to Lebanon for a fee of over $2,000. The on-foot journey through the mountains took three days.

In terms of price, speed, and comfort, the services advertised on TikTok claim to blow those arrangements away.

Responding to one user who asked about whether there was pickup from Homs, an account owner replied: “There is from wherever you want.”