The longtime head of the Secretariat stepped down in July, but is now under investigation for allegedly abusing his office. He has been accused by developers and builders of demanding large bribes in exchange for deeming buildings “legal.”

Nemanja Stajić’s former title sounds like something out of a Kafka story — “Secretary of the Secretariat for the Legalization of Buildings” — but it’s a very real job here in Belgrade, where “legalization” has become a byword for corruption.

Amid a frenzied construction boom in Serbia’s capital, it has become standard practice to build first and ask permission later. The city is also home to thousands of so-called “wild buildings” erected amid the chaos of the 1990s and early 2000s, when war and U.S. sanctions destroyed the country’s economy.

That’s where the Legalization Secretariat comes in. 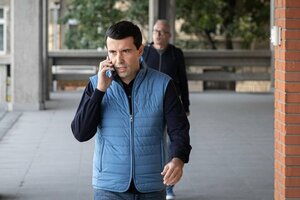 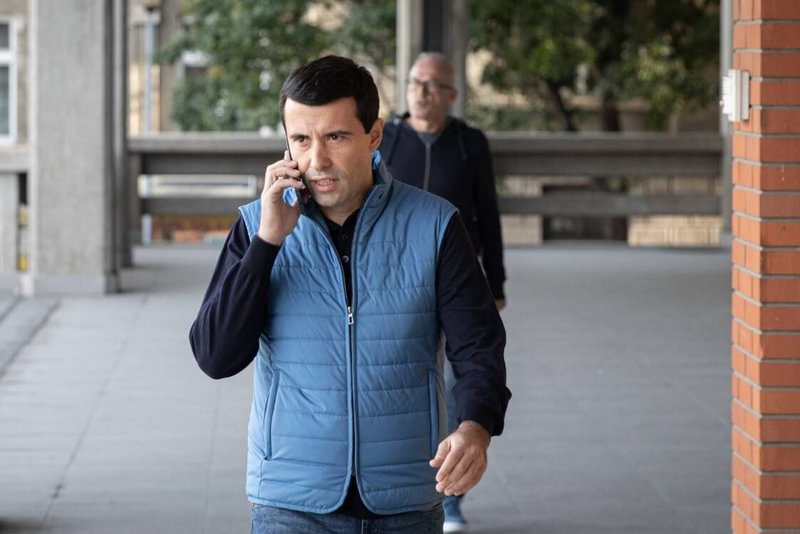 Credit: KRIK Nemenja Stajić outside the Palace of Justice in Belgrade, Serbia, on October 6 ahead of being questioned by prosecutors.

If you have a building that was never formally registered or doesn’t adhere to code — maybe it’s too close to another structure, or lacks the requisite parking spaces — you can head to the Secretariat, pay a fee, and get the structure retroactively “legalized.”

The system was supposed to help bring more structures into compliance with building codes and get them registered with the state, allowing them to be titled, taxed, and sold more easily.

But in practice, it has let developers cut corners by embarking on projects that blatantly flout regulations, then get them “legalized” with the stroke of a pen — and a bribe.

In May, OCCRP’s Serbian partner, KRIK, published an investigation showing how the legalization process benefitted corrupt officials and shoddy builders at the expense of ordinary Serbs. Several experts and construction industry insiders accused Stajić — who was head of the Secretariat until his nearly nine-year tenure in office ended this summer — of presiding over a corrupt system that had created powerful financial incentives for builders to flout the law.

Now, Serbian prosecutors have launched an investigation into whether Stajić abused his position. The ex-official was questioned today by prosecutors, who confirmed the probe but declined to comment further.

But experts say the damage has already been done in Belgrade, which is home to an estimated hundreds of thousands of illegal structures.

“In the past five or six years, the fact that so much has been built [in Belgrade] is only because a huge number of buildings and construction sites have been illegal, without a single paper,” said Goran Rodić, the vice president of the Serbian Construction Chamber of Commerce.

He said the law passed in 2015 to promote building legalization, although well-intended, had signaled to developers that they could get “a free pass for wild construction.”

“Belgrade has been disfigured,” Rodić said.

In the 1990s, Serbia was battered by the wars that followed the breakup of Yugoslavia, and U.N. and U.S. sanctions that destroyed the country’s economy. With the government focused on survival, and Belgrade forced to accommodate an influx of nearly 1 million refugees, illegal construction flourished.

“It became a mess,” said Željko Simić, a lawyer who helps Serbians legalize their pre-2015 buildings. Construction permits were almost impossible to obtain, he said, and oversight was lax. Many new homes that went up during the war and post-war period were never legally registered.

Illegal construction was even tacitly encouraged, since the state was struggling to meet demands for housing, according to a recent paper in the urban policy journal Cities by researchers at the University of Belgrade.

“The citizens aren’t to blame for anything,” said Simić. “If everyone could have obtained a building permit within a normal period of time, they wouldn’t have taken these risks … but when someone makes it impossible for you, of course you need a solution.”

In acknowledgement of these challenging circumstances, the Law on Legalization was passed in 2015 to help legalize structures built before that date. The Secretariat with Stajić at its helm was made responsible for processing these claims.

But in interviews with KRIK, construction industry insiders said the process ended up being systematically abused by builders of newer structures that simply did not meet code.

“Things are [legalized] on the basis of blueprints and money,” said real estate developer Branko Maljević. “Something can be registered that would fall down on its own.”

Things are [legalized] on the basis of blueprints and money. Something can be registered that would fall down on its own.”
– Branko Malević, real estate developer

Maljević and two other industry experts — who spoke anonymously due to fear of reprisals — said getting all the legal permits to build something in Belgrade is painfully slow and bureaucratic. Acquiring a construction permit can take a year and involves visits to as many as 18 offices, most of which require fees.

But that could all be avoided, and construction could start immediately, they said, if a builder paid bribes to the Secretariat headed by Stajić.

“Nothing can be done without him,” said Maljević earlier this year. “All channels lead to that hub.”

First, they said, a cash bribe could get them “permission” to build without a permit.

Then, after the building was completed, another bribe would allow the builder to falsely back-date official satellite imagery at the Serbian Geodetic Authority, making it seem like a building had been there before 2015, and was eligible for legalization.

Stajić declined to comment. But he has publicly touted his work at the Legalization Secretariat, and the law on legalization, as important reforms for Serbia.

“More and more buildings should be legalized, not demolished,” he told Serbian news outlet Telegraf in an interview last year.

🔗“Whoever Builds Legally Is In Trouble”: Why Illegal Construction is the Norm in Belgrade

Construction industry experts told KRIK and OCCRP that building illegally is so lucrative that making money doing things by the book is almost impossible. They listed many ways that builders can save by cutting corners. Here are some of the most common:

The savings are significant — between 100 and 450 euros per square meter. “Whoever builds legally is in trouble, because he can’t make money,” the man said.

Another former construction contractor, Goran Stakić, told KRIK and OCCRP the system is riddled with corruption. He claims he worked on 25 illegal buildings over the years. In some cases, he said their owners turned to an alleged associate of Stajić, Ivan Komatina, to get them legalized.

He provided a list of some of these addresses to reporters, including four that were built after 2015. Reporters used satellite imagery to verify that all four were built illegally.

But in the lawless world of legalization, not everything went according to plan. After years of illegal construction, Stakić says he was double-crossed by Komatina after paying a legalization bribe. Enraged, he threw a bomb at Komatina’s apartment building, killing his dog.

Stakić was arrested in 2019 and charged with illegal possession of explosives and causing public mayhem. His case is still making its way through the Serbian court system after an initial guilty verdict in 2020 was overturned. In the meantime, he says, he has lost everything.

“After the [bombing], I couldn’t get any work with anyone,” he said.

Komatina, who attended each session of Stakić’s trial, declined to comment.

🔗From Belgrade to the Caribbean — and Back Again

Goran Stakić told OCCRP that Nemanja Stajić and Ivan Komatina also shared business interests in Belgrade’s construction industry. Reporters didn’t find evidence of this, but Stajić’s brother, Novak, recently turned up in a massive leak of offshore documents as the owner of a company in the British Virgin Islands that moved money into Serbian construction projects — with Ivan Komatina as his partner.

Registration papers for Novak Stajić’s offshore company, Loyal Sanibel, were discovered in the Pandora Papers, a leak of nearly 12 million documents from 14 offshore service providers obtained by the International Consortium of Investigative Journalists and shared with news organizations including KRIK and OCCRP. They provide an inside look at how the wealthy and well-connected hide money in secretive jurisdictions.

Loyal Sanibel was set up in May 2019. A month later, it became the co-owner of a newly established Serbian construction firm, Loyal Trust. It also established another Serbian company, Loyal Building, in August.

It’s unclear why it would make business sense for a Serbian to create an offshore company in the Caribbean to invest in construction projects back home.

“It’s definitely a red flag,” said Nicholas Shaxson, a researcher at the Tax Justice Network. “[For] creating a construction company, why not just set up a local company?”

One advantage of a BVI firm, Shaxson said, is that “you can use it to disguise co-ownership, [and] hide money flows.”

Novak Stajić and Komatina also built three other Belgrade buildings together under the banner of yet another company, Loyal Trust. (Some of their interests were also revealed by the Balkan Investigative Reporting Network this year.)

At least two of their joint projects were also improperly legalized by Nemenja Stajić’s Legalization Secretariat: To qualify for legalization, buildings need to pre-date 2015. But when reporters examined Google Earth satellite imagery from 2015 and 2016, they found no trace of them. The buildings only appeared on the map in 2018.

Alleged corruption at the Secretariat has taken its toll not only on the construction industry, but on Belgrade itself. 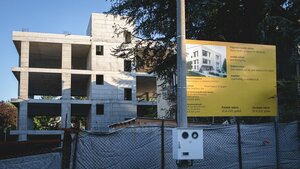 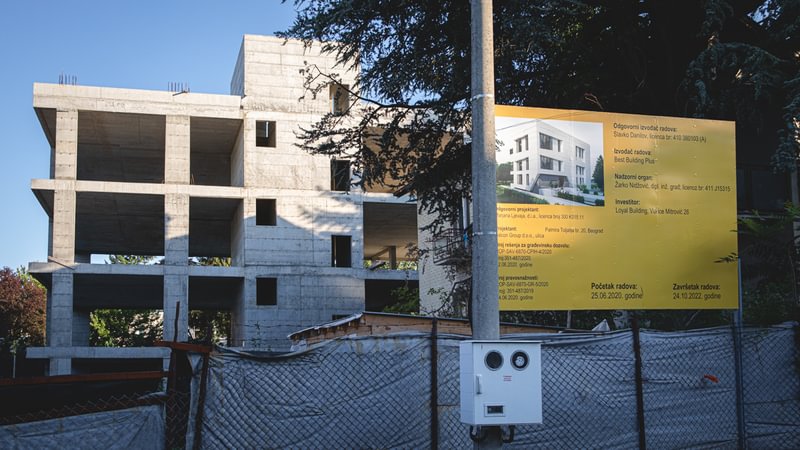 Credit: KRIK An unfinished building in Belgrade that was supposed to be three stories, but had an illegal fourth story tacked on. The construction was begun by a company belonging to Novak Stajić, the brother of the longtime head of the Legalization Secretariat.

The city’s newspapers carry frequent headlines about building collapses and construction accidents. In one case, several families and a retired Orthodox priest were walled into their homes after an illegal building was hastily erected in front of their driveway. Last summer, an entire building collapsed in the Vracar neighborhood due to poorly planned construction nearby

Dubravka Vukoje, 69, remembers a more verdant Belgrade when families like hers could cultivate small orchards in their backyards. But last year, she told reporters, a construction company moved in and began ripping up her cherry and walnut trees to build a four-story building right outside her house. She is furious.

The company erecting the building, she has learned, is Loyal Building — the same one that was owned by the offshore company belonging to Stajić’s brother. It obtained the correct permit to build a three-story structure, but added an illegal floor on top, which Vukoje says is an eyesore in an otherwise low-slung neighborhood.

“It bothers the whole neighborhood but it bothers me the most,” she said, showing a journalist how close the new apartment tower is to her windows. “He blocked my air and sun and light.”