Jumabek Tentiev is one of Kyrgyzstan’s top professors, a specialist in architecture and construction who has published more than 100 papers in these fields.

He holds numerous degrees and titles, including “honored scientist of Kyrgyzstan,” and is a member of the National Academy of Sciences.

So he should have been the ideal person to spearhead the construction of a new campus for the Kyrgyz Architecture and Construction Institute, where he served as rector in the 1990s. 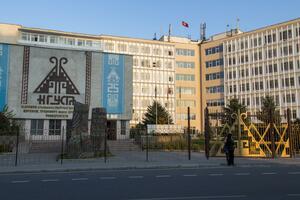 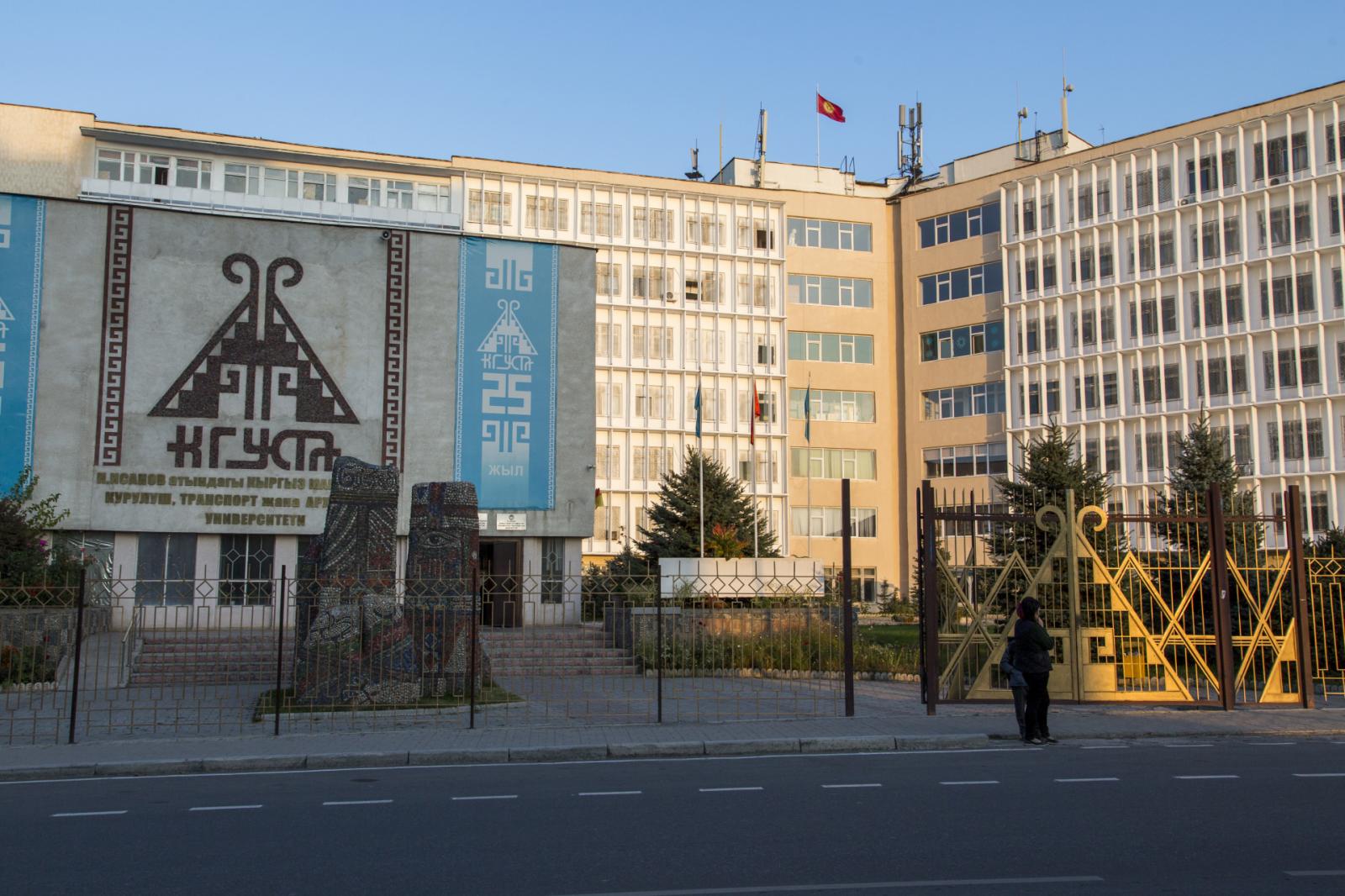 Credit: Svetlana Zelenskaya A building of the Kyrgyz architecture university, which still has not built a new campus. The land awarded to the university for this purpose ended up in private hands.

After Tentiev outlined a plan for a sparkling new complex featuring a stadium, amphitheater, design studios, and sports facilities, the university was even given several hectares of prime land to build on, inside Bishkek’s Ataturk Park. 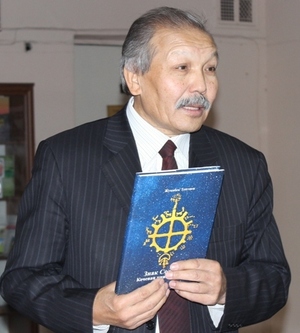 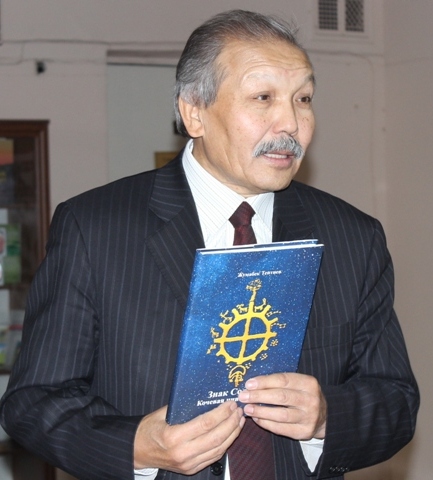 Credit: Site of National Academy of Sciences Professor of architecture Jumabek Tentiev — the former rector of the Kyrgyz Architecture and Construction University. He initiated the construction of a new campus for his students that never took place. Instead, Tentiev himself received a land plot in that territory.

But more than 20 years later, students at the university, now called the State University of Construction, Transport, and Architecture, are still crammed into their increasingly insufficient classrooms on the other side of the Ala-Archa River. Construction on the new campus never even began.

Even worse, the parkland it was supposed to sit on is now all gone, snapped up by private owners while the university project hung in limbo.

One of the new landowners? Professor Tentiev himself.

In 2003, the rector personally acquired 880 square meters of land in Ataturk Park that had been designated for the university. He paid nothing for the prime real estate, then sold it for a profit a few years later.

How did this happen? While investigating how large areas of Ataturk Park ended up in private hands, OCCRP and its Kyrgyz member center, Kloop, obtained a trove of documents that shed light on the rush for the university’s land.

In 1996, Professor Tentiev requested land from the Bishkek Mayor’s Office for the new university campus. The construction would be fully funded out of the national budget, he explained. The Mayor’s Office offered the land in the park for free. The stars seemed aligned for the project to succeed.

But the campus was never built.

Professor Tentiev told reporters that the university didn’t have the money.

“With what funds were we going to build?” he asked during an interview on the grounds of Kyrgyz-Russian Slavic University, where he is now a professor.

According to Pamirbek Jolbolduev, one of the architecture university’s current vice-rectors, the only construction the university completed on the site was an academic building for the use of students studying Arabic. The building, which had been sponsored by Arab investors, was converted into a mosque sometime in the 2000s.

Credit: Svetlana Zelenskaya A mosque was built as an academic building for students studying Arabic. This is the only structure the university built on land it had been awarded for a new campus.

The imam of the mosque, Biloladji Saifiev, confirmed this narrative.

Shortly after the mosque went up, a company owned by a wealthy businessman spotted an opportunity in Ataturk Park.

The company, Naryn, headed by businessman Kuttubai Murzabaev, wrote a terse letter to the Mayor’s Office: “The manufacturing enterprise Naryn asks you to allocate land for the construction of recreational houses for families.”

That single sentence was apparently sufficient for then-Mayor Medetbek Kerimkulov to hand over the land. Naryn was asked to pay a fee for its use, but reporters were unable to determine whether this ever happened, or how much was paid. 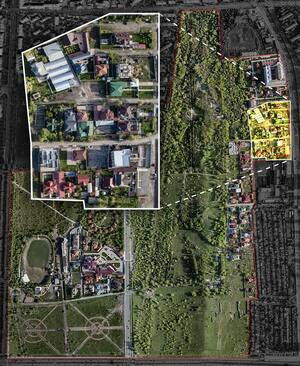 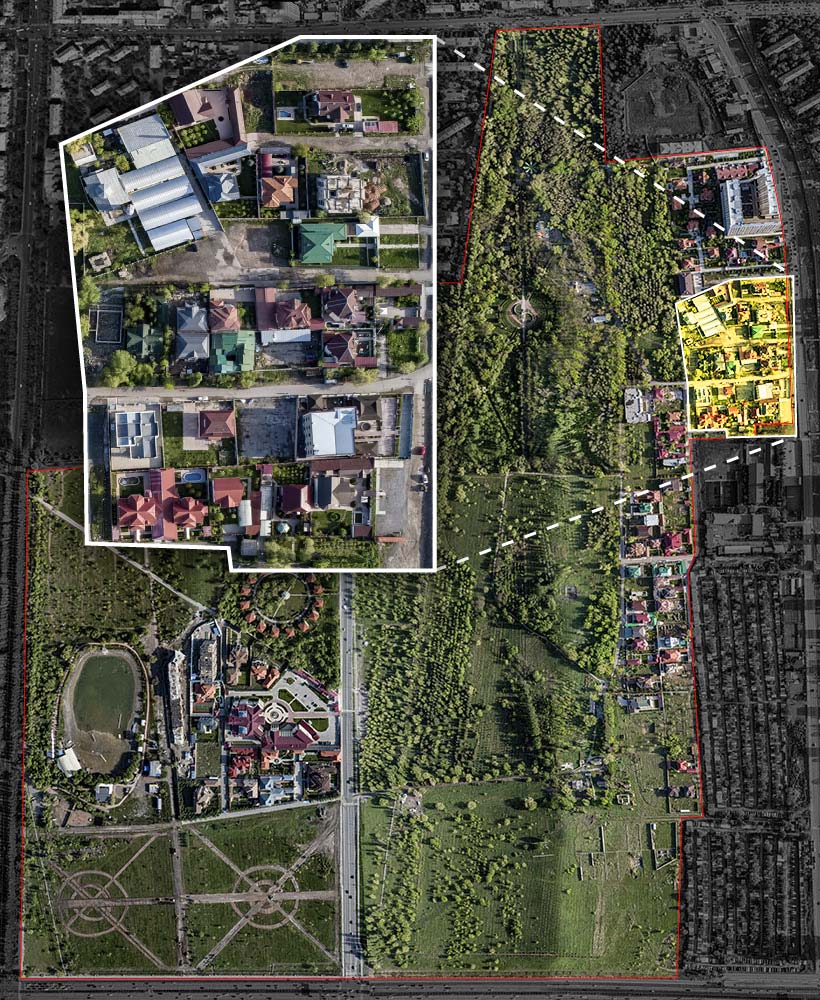 By 2003, Naryn had built 10 attractive villas on that territory that were soon acquired by wealthy and powerful figures, including Bolotbek Isakhunov, a successful businessman; and Raimbek Mamyrov, then a top official at the National Electric Grid of Kyrgyzstan.

At that point, the land underneath the villas still technically belonged to the city. But that same year, all 10 villa owners petitioned the Mayor’s Office to be granted ownership of the land. Their requests were swiftly approved. 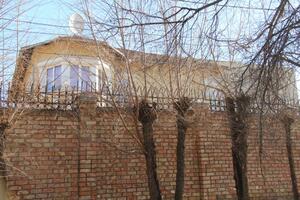 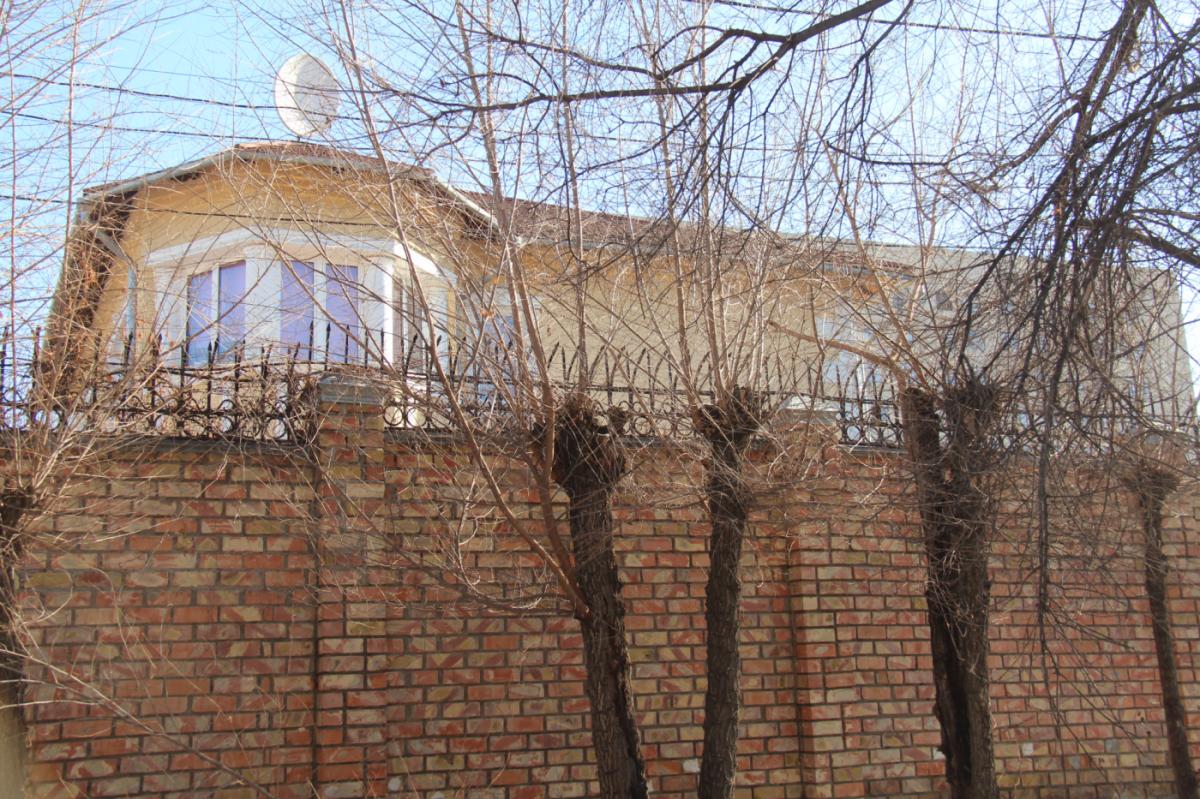 Credit: Metin Dzhumagulov One of houses built by Naryn for businessman Bolotbek Isakhunov. He and 9 other owners now live in luxurious villas in a restricted zone secured by checkpoints and high fences.

After that, the land rush was on. Mayor Kerimkulov began to give away more and more of the university’s land to people who asked him for free plots for the construction of villas. Most were people of substantial means or connections.

Among them were former ambassador Rysbek Kachkeev, former speaker of parliament Altai Borubaev, and scientist Amanbek Zhainakov. (Borubaev, like many other owners, denies his free land was ever part of Ataturk Park, saying there were no trees there when he acquired it.)

On Nov. 28, 2003, the saga of the university land came full circle when the mayor gave a plot of land to Professor Tentiev himself — who, by that time, was a member of the Bishkek City Council as well as continuing to lead the university.

Tentiev did not deny that he and his colleagues received free land in the park, but said that as Kyrgyz citizens, they had a right to it under the Land Code.

His request was reasonable, he said, because he wanted a home near his workplace where he could pursue his creative dreams.

“So what? I am not a [Kyrgyzstan] citizen or what? No, do you understand that I’m a citizen of the Kyrgyz Republic? I was the head of a City Council commission for 10 years and can’t get a small piece of land for myself?” 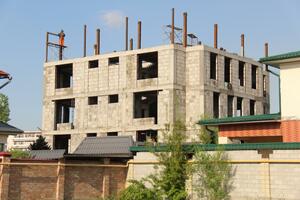 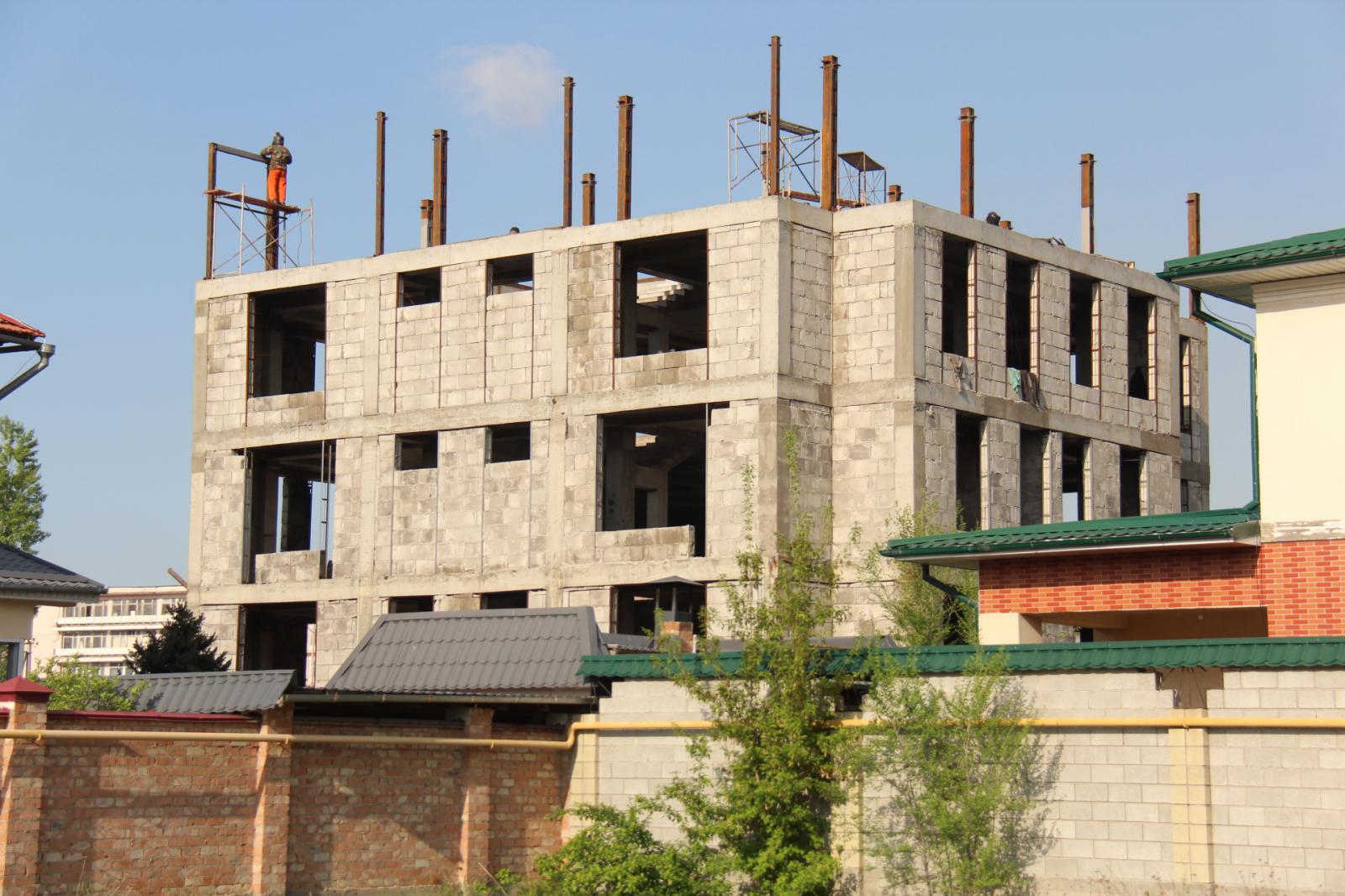 Credit: Metin Dzhumagulov This plot was awarded for free to the former rector of the Kyrgyz architecture university, Jumabek Tentiev in 2003. Later, he sold it for an unknown amount, making a quick profit. The new owner is now constructing a multi story building there.

“I don’t decide,” he added. “It’s the Mayor’s Office that decides. Empty land was given to every citizen, to thousands of citizens.”

But with the university’s land grant now eaten up by private villas, he is not optimistic about the prospect of receiving more.

And he said his colleagues were saddened and baffled by what had happened to the initial project — and why their ex-leader had appeared to profit at the university’s expense.

“We once asked him a question: ‘Why did you give away the land?’” recounted Jolbolduev.

He said, “It’s not me.” Then, the vice-rector said, “He just spread his empty hands.”