With a stroke of his pen in November 2006, a single mid-ranking city official gave away nearly 200 plots of land across Bishkek, the capital of Kyrgyzstan.

The Central Asian country’s Land Code allows for small parcels of unused public land to be granted to the indigent. But in this case, most of the recipients were wealthy and well-connected. And many of them received prime land in Ataturk Park — the second largest park in Bishkek, a beloved public green space that was once a favorite destination for city-dwellers to relax.

According to the Land Code, parks can’t be given out to private owners, and construction of villas and apartment houses there is forbidden. In addition, the Kyrgyz state declared Ataturk Park a historical site in 2002, which was supposed to stop the destruction of the park territory that had already begun. Despite this, the official, Kairatbek Borbukov, secretly handed out plots of land in the park in violation of multiple laws and regulations.

After Borbukov signed the land distribution document, referred to as “Decree 412,” he took another highly irregular step. He removed the document from the local archive and kept it in his office for several months.

Six months later, in May 2007, Borbukov was detained on suspicion of receiving bribes in exchange for distributing public land in a separate case.

Police officers confiscated his keys and sealed his office. He was detained for three days, after which he was hospitalized for unknown reasons. Later, he was released without any explanation. After he returned to work, several key documents disappeared from his office, including Decree 412.

Borbukov was later charged with abuse of office and illegally signing decrees in the Ataturk Park case as well, and the district administration cancelled Decree 412. But most of the people who received land through the scheme had already registered it in their names. The land remained with its new owners, who included nine MPs and the head of the National Olympic Committee.

Police never found the missing decree — the key evidence against Borbukov — and in August 2010, the case against him was closed because the statute of limitations had expired.

Borbukov was not the only official with an eye toward land largesse. Three different Bishkek mayors also handed out prime land in Ataturk Park to some of Kyrgyzstan’s most wealthy and well-connected citizens. Another mayor took land from the park for the construction of an apartment complex that was never built. Two other senior city officials gave plots away as well. 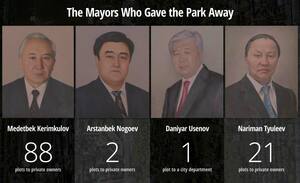 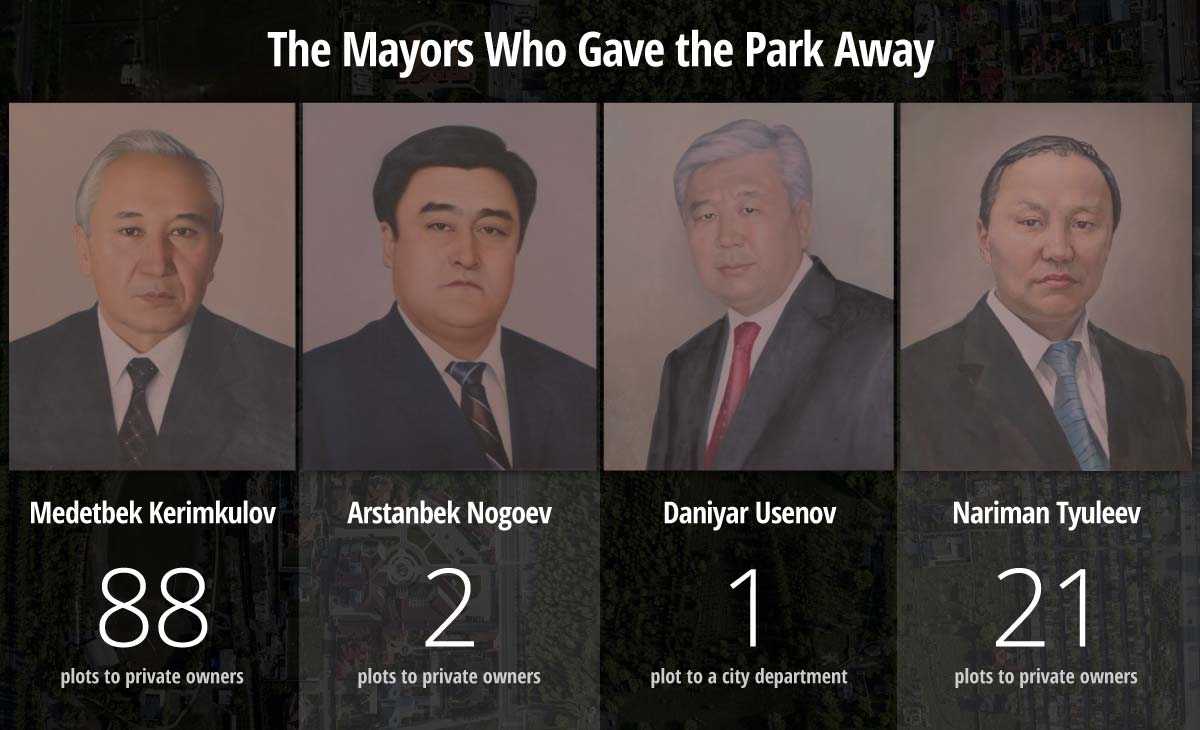 It wasn’t just Decree 412 that was kept hidden from the public. Nearly a dozen other documents providing for park land distribution were also kept secret until reporters from Kloop, OCCRP’s member center in Kyrgyzstan, set out to uncover them as part of a larger effort to find out how nearly a third of the park disappeared into private hands.

They found that much of the park was divided up into plots and given out to politicians, officials, businessmen, and public figures. Most of them ended up selling their newly acquired land to make a quick profit.

Click here to see an interactive map of Ataturk Park — and who got what.

Still, local authorities refused to provide several relevant public documents to reporters, including court decisions, land-grant decrees, and a zoning map of the city. Many questions remain unanswered, including what criteria — if any — the officials applied when handing out land in Ataturk Park. It also isn’t known why the land was allowed to remain in private hands after the officials’ misconduct was revealed.

Over the course of a decade, the four mayors gave out more than 100 plots of park land. Three were later arrested for corruption and abuse of power, although only one for violations involving Ataturk Park.

Corruption is a serious problem throughout Kyrgyzstan, but the Bishkek mayor — an appointee of the City Council, which is usually aligned with the ruling party — has particularly wide latitude over the privatization and distribution of land. Of the past seven Bishkek mayors, six have been charged with corruption or abuse of power, mostly in connection with land giveaways.

The First Goes the Farthest

Medetbek Kerimkulov was elected mayor in 1999. The following year, he kicked off the Ataturk Park land rush, becoming the first public official to grant a plot to a private citizen. The beneficiary was Galina Pugacheva, a deputy prosecutor general.

In August 2002, Ataturk Park was named a historical monument, a step that was supposed to preclude further privatization. But less than a month after that, Kerimkulov gave away a plot to Saken Kydyralieva, the wife of a former ambassador and the mother of yet another Bishkek mayor, Kubanychbek Kulmatov. (Kulmatov has been charged with corruption, although he is not accused of giving away parkland.)

Mayor Kerimkulov followed that up with land grants to government ministers, prosecutors, police officials, employees of the presidential administration, ambassadors, and even an actress. In total, Kerimkulov gave away more than 80 plots of parkland during his six years in office, mostly to members of Kyrgyzstan’s social and political elite. He was never charged with a crime related to the land grants. Today, he serves as the head of Kyrgyzstan’s Association of Oil Trading.

Kerimukolv did not respond to multiple requests for comment.

Credit: Svetlana Zelenskaya The building of the Bishkek Mayor’s Office.

Arstanbek Nogoev was elected mayor of Bishkek in August 2005. Several months after taking office, he gave away two plots in Ataturk Park, including one to prominent businesswoman Damira Borbukova. In 2007, he resigned from his position to become minister of agriculture.

In 2014, Nogoev was charged with attempting to illegally sell the national hippodrome, where the World Nomad Games are held. He was sentenced to 10 years in prison, but fled to Russia before he could be captured and later served as a senior regional official there.

Nogoev’s exact whereabouts are unknown, and he could not be reached for comment.

Daniyar Usenov served as Bishkek mayor between 2007 and 2008, between stints as vice prime minister and prime minister. While serving as mayor, he signed over 11 hectares of the park to his own office, earmarked for the construction of apartments. He was appointed prime minister in 2009, but fled the country shortly after the 2010 Kyrgyz Revolution deposed President Bakiyev and many officials close to him.

In 2015, Usenov was sentenced in absentia to 15 years in prison for misappropriation for the Ataturk Park case. Separately, he was sentenced to life for complicity in murder, attempted murder, and abuse of power during the revolution.

There was an outcry in Kyrgyzstan last year when photos emerged in the media showing Usenov living freely in Belarus, where he apparently serves as the director of the Belarusian National Biotechnology Corporation under an assumed name, Daniil Uritski.

The last mayor to carve up Ataturk Park was Nariman Tyuleev, who served from 2008 to 2010. When he took up the post, the administration of President Kurmanbek Bakiev raised concerns about illegal construction in the park and ordered the mayor’s office to review the land giveaways.

Still, Tyuleev wasted little time in joining his predecessors. First, in 2008, he started to sell plots around the current general prosecutor’s office — land that had previously been given to the Presidential administration to construct a hotel complex for international delegations. He also gave away two land plots at the edge of the park. 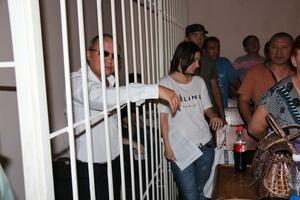 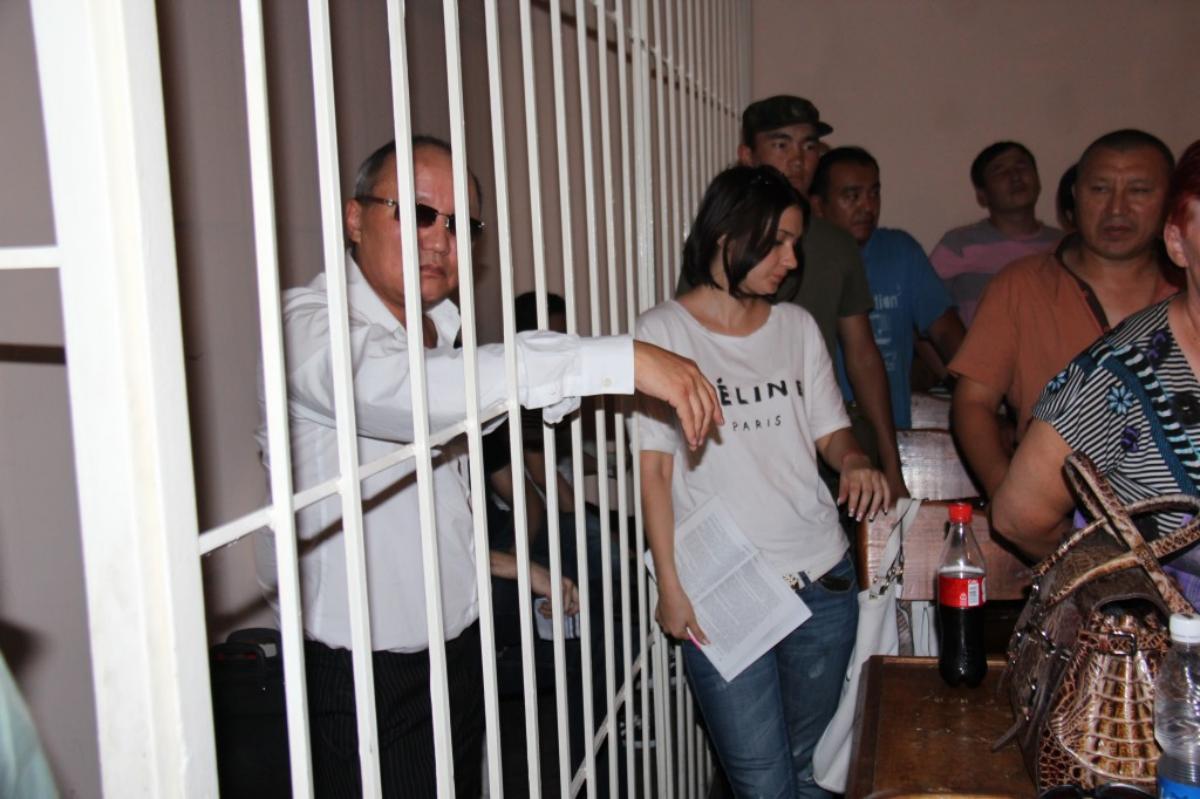 Credit: kloop.kg Former Bishkek mayor Nariman Tuleev in a courtroom during his trial. Tuleev was sentenced to prison for corruption.

One — a 600-square-meter plot to build an apartment house and business center — went to his father. Another went to Talantbek Usupbekov, who, as of the end of 2017, was a shareholder in Dos-Credo Bank, where Tyuleev’s son was then board chairman. He later became a major shareholder of the bank.

In June 2012, by which time he was an MP, Tyuleev was arrested for corruption in an unrelated case and was sentenced to a prison term. After his release in May 2016, the government seized properties and expensive cars belonging to him and his relatives. The land Tyuleev had given to his father was also confiscated. It is now owned by the mayor’s office and remains empty.

Tyuleev initially responded to reporters’ inquiries, suggesting a meeting. He then stopped responding. His son, Bakyt Nariman uulu, could not be reached for comment.

The Park That Was Lost
From Public Park to Millionaires’ Row
Big Man, No Campus