A charitable foundation run by Kyrgyzstan’s politically powerful Matraimov family received much more money than previously known from an underground network that laundered a vast fortune out of the country, according to newly revealed bank records.

The money appears to have originated in an underground cargo empire run by a Uighur family with the collusion of Kyrgyzstan’s customs service. The Matraimov family’s most prominent member, Raimbek Matraimov, is a former deputy customs chief who, according to an earlier investigation by RFE/RL, OCCRP, and Kloop, enabled and profited from the illicit business.

Read the previous investigation for more about the Abdukadyr family and how they made millions smuggling goods from China into Central Asia. 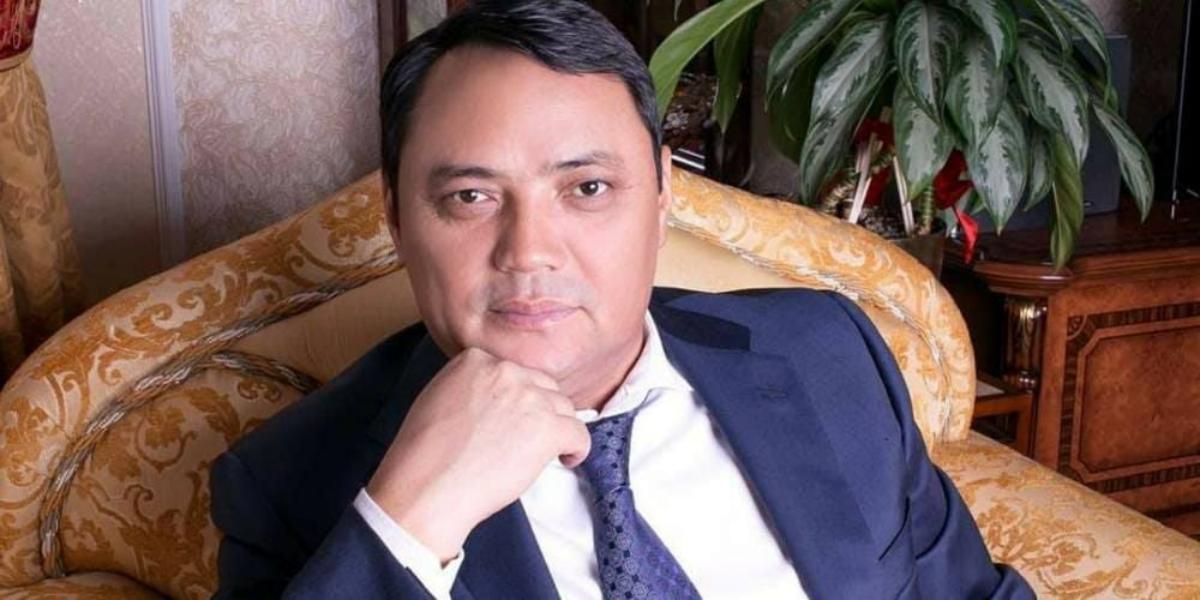 The investigation relied in part on materials provided by Aierken Saimaiti, a self-confessed money launderer, murdered in Istanbul in November, who had accused Matraimov of being instrumental in widespread corruption.

Saimaiti claimed to have laundered $700 million, the proceeds of the underground business, out of Kyrgyzstan — but also said that he and his wife had funnelled part of the proceeds to the Matraimov family’s charity, explaining that this money represented a portion of Raimbek Matraimov’s share of the spoils.

Part of the earlier investigation revealed the Matraimov family’s real estate holdings in Dubai, including a construction project jointly owned with the Abdukadyrs. Saimaiti wired tens of millions of dollars to the Abdukadyrs in Dubai.

The Matraimovs have denied any links with Saimaiti, conceding only that his wife had donated $200,000 to their charity, allegedly on behalf of a businessman they have declined to identify. Iskender Matraimov, Raimbek’s older brother and a member of parliament, has said that the goal of the family foundation was to promote a “healthy lifestyle,” that the donations constituted zeket, a form of Islamic charity, that the donors were his “foreign friends,” and that they did not want their names to be disclosed.

After an initial RFE/RL investigation into Saimaiti’s money laundering was published last spring, the country’s financial police conducted a preliminary investigation that included a review of the donations the Matraimovs’ charity received. 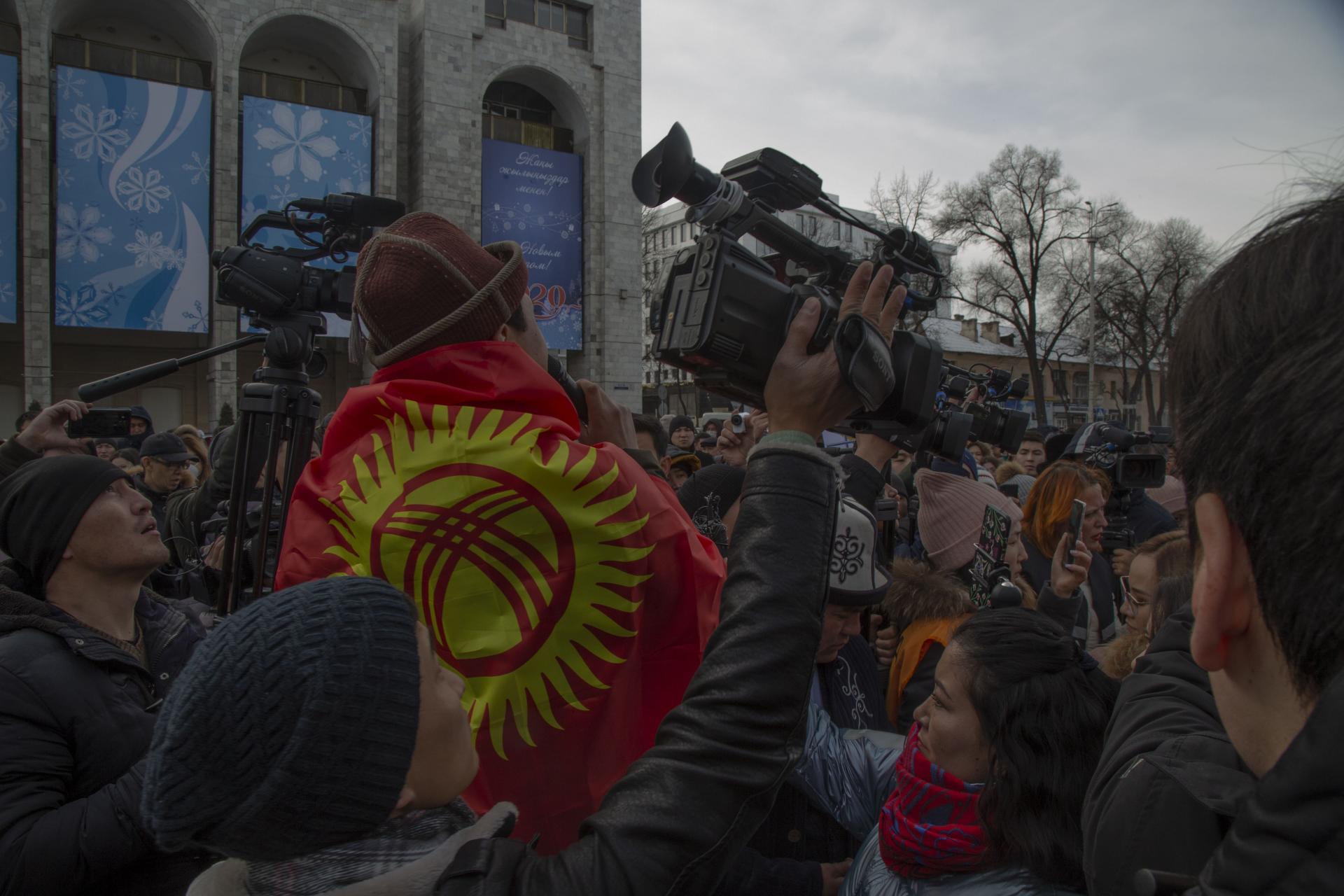 A protest against corruption in Bishkek, Kyrgyzstan, after the publication of the initial investigation in this series. Credit: Alexandra Titove, Kloop

The agency released a statement that included a list of what it called the organization’s only 10 donors between 2014 and 2019, identifying them by their initials. These donors transferred a total of $1.4 million to the foundation, the police said.

Newly obtained U.S. bank records reveal the identity of another three of these 10 donors. Though the Kyrgyz police had not publicly flagged these payments as problematic, and the Matraimov family has vigorously denied any impropriety, an analysis by reporters shows that all three had demonstrable links to Saimaiti and the money he laundered out of Kyrgyzstan.

Ironically, reporters were able to obtain the new U.S. bank records after the Matraimovs sued RFE/RL’s Radio Azattyk and Kloop for libel in Kyrgyzstan in response to the outlets’ earlier investigation.

Using a U.S. statute that allows a party to apply to a U.S. court to obtain evidence for use in foreign litigation, RFE/RL sought a subpoena to present to two U.S. banks — Deutsche Bank Trust Company Americas and The Bank of New York Mellon — for records related to the transactions Saimaiti claimed had been made to the charity. The U.S. banks were involved because they acted as third-party banks that processed the transactions, which were made in U.S. dollars.

In response to the subpoena, details for a total of 66 unique wire transfers were obtained.

The newly revealed transactions, totaling $470,000, include wire transfers from companies based in Turkey and Dubai that listed commercial reasons — such as “payment for textile” and “purchase of electronics.” Kyrgyzstan’s financial police has said that the organization “does not conduct any kind of commercial activity.” Saimaiti told reporters that he used a variety of companies to obscure the origins of money wired to the charity, including a company from the United Arab Emirates. As evidence, he gave reporters records of the wire transfer from Dubai. Their authenticity is now independently confirmed by the U.S. bank records.

Along with the $200,000 sent by Saimaiti’s wife, the newly revealed transactions bring the total sum the charity is known to have received through the money-laundering network to $670,000. This is nearly half of the total wired to the charity between 2014 and 2019, as stated by the Kyrgyz financial police.

Saimaiti initially claimed that he had wired a total of nearly $2.4 million to the Matraimovs’ charity.

As evidence for this total, he gave reporters documents related to seven alleged transfers to the charity. The Matraimov family has acknowledged receiving $200,000 from his wife, but challenged the authenticity of the remaining documents. Until his death, Saimaiti continued to claim that all the documents were legitimate. However, the questioned documents could not be independently verified and are not confirmed by the newly obtained U.S. bank transactions.

For more detailed information about which records are confirmed by which sources, see the chart below.

These are the five transfers now confirmed to have been sent to the Matraimov charity from Saimaiti’s wife and associates. Click here to open a more detailed chart, showing the proofs for each of these transfers, in a separate window. Credit: OCCRP

Click here to view the transfers associated with Artis in an interactive graphic.

One of the three newly revealed donors to the Matraimovs is a man named Dilsat Artis, a Turkish citizen who, according to the U.S. bank records, transferred $170,633 to the Matraimov foundation on October 19, 2015.

There is little public information about Artis. But Saimaiti described him as someone who does business for the Abdukadyr family in Turkey. A bank statement and a transaction spreadsheet provided by Saimaiti indicate that Artis appeared repeatedly in what he described as his money-laundering system. According to those records, Saimaiti sent a total of $2.35 million to Artis in 13 separate wire transfers in 2014-15. The bank account number listed for Artis in Saimaiti’s spreadsheet matches the one that appears in the newly revealed U.S. bank records.

Click here to see Artis’s transfers to and from Palvan in one of Saimaiti’s internal records.

Artis also appears to be involved in the business empire of the Abdukadyrs, the family whose money Saimaiti was laundering. A separate bank statement provided by Saimaiti shows that, in 2014, Artis deposited tens of thousands of dollars into the bank account of Palvan Insaat Turizm, a key Abdukadyr firm in Turkey, and that he received multiple payments from the company as well.

Reached by reporters, Artis said he had a long-standing business relationship with the Abdukadyrs. Hhe had learned about the Matraimovs’ Kyrgyz foundation while living in Istanbul, and that his wire transfer to the organization represented zeket, a charitable donation encouraged in Islam.

He also described himself as a long-established businessman who did frequent business in Central Asia and said the payments he received from Saimaiti were for goods and services on behalf of customers. Reporters could find little evidence of any significant business activity by Artis in the region at the time the payment to the Matraimov family was made. The two Turkish companies he owned at the time appeared to have no web sites.

There is one notable exception: In December 2018, Artis established a new company that soon acquired a 30-percent share in an Uzbek company behind a controversial $430 million development project in Tashkent. The BBC’s Uzbek service reported officials saying that local residents would be evicted from their homes to make way for the project. Artis did not respond to subsequent questions about the nature of his investment.

In an interview just weeks before he was murdered, Saimaiti pointed to two specific transfers to the Matraimov charity.

Saimaiti did not verbally state the names of the companies that carried out the transfers. But the newly revealed U.S. bank records now appear to confirm their identity.

In the case of the $160,000 transfer, Saimaiti sent reporters corroborating documents: a wire-order form and an electronic transaction receipt documenting the transfer to the Matraimov charity from a Dubai-based firm called Alwasl General Trading FZE. Reporters were initially unable to verify the authenticity of these records independently, but the U.S. bank transactions match the details they contain, including the transaction amount of $159,965, the date of the transfer, its purpose (listed as “purchase of electronics”), and the account number.

Saimaiti frequently listed variants of the phrase “for textile” as a reason for his transactions, explaining that this technique was used to move money for other purposes. Disguising large payments as business transactions is a common technique in money laundering. Click here to see the 78 wire transfers Saimaiti made listing the purpose as “textiles” in an interactive graphic.

Reporters found little public evidence that Alwasl carried out any business activity, other than importing four shipments of frozen squid from India to Turkey in August 2017 worth about $336,000. This information appeared in import/export records obtained by the Washington-based research group C4ADS.

Calls to a listed number for Alwasl resulted in no response. Two individuals identified as representatives of the company were contacted. One immediately ended the conversation; the other read a message but did not respond.

The second company now known to have wired money to the Matraimov charity is a Turkish firm with the unwieldy name Star Crystal Kuyumculuk Gida Tekstil Turizm Sanayi Ve Ticaret Limited Sirketi — which is Turkish for “Star Crystal Jewelry Food Textile Tourism Industry and Trade Limited Company.” The company is owned by a man named Aybek Ulucay about whom reporters could find virtually no information. 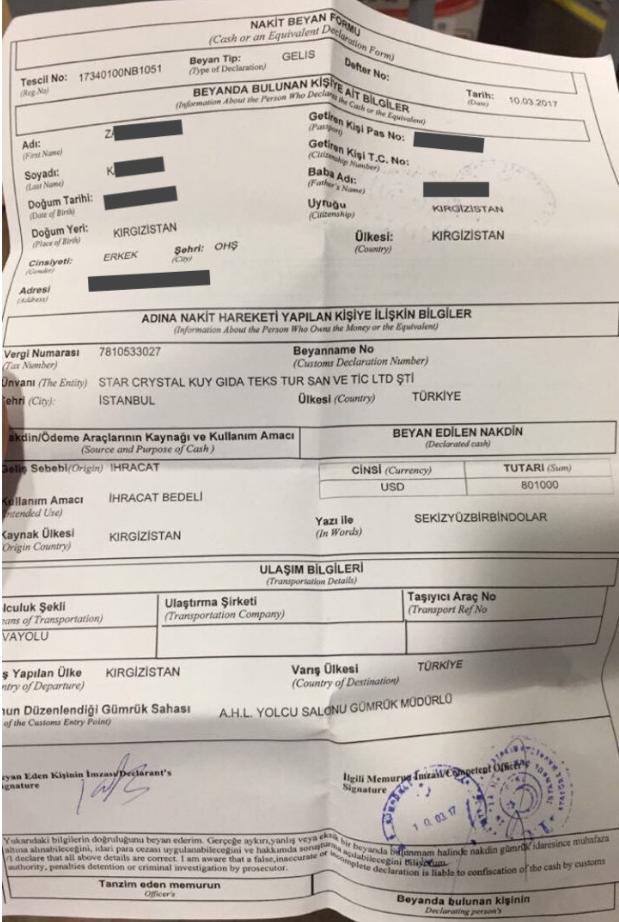 A cash declaration form, filled out by one of Saimaiti’s couriers, that shows him bringing $801,000 into Turkey and declaring the money as belonging to Star Crystal. The company also has a shared Istanbul address with two other Turkish companies that received over $1.8 million from Saimaiti’s small Kyrgyz company. Credit: OCCRP

The U.S. bank records show that, like the Dubai firm Alwasl, Star Crystal listed a commercial purpose for its October 2016 wire transfer of $139,965 to the Matraimov charity: “payment for textile.” The sum of that transfer is consistent with the $140,000 transfer to the Matraimiov charity that Saimaiti had mentioned.

In the first place, an electronic wire transfer receipt provided by Saimaiti shows that a small Kyrgyz firm he operated sent $499,200 to the company on April 24, 2017 for “textile materials.” The Turkish bank account number listed in the document matches the one from which Star Crystal wired money to the Matraimov charity as a payment “for textile.”

There were further connections to Star Crystal among a network of working-class cash couriers that Saimaiti used to spirit massive sums of laundered money out of Kyrgyzstan.

A document the money launderer provided shows that one of his couriers flew from Bishkek to Istanbul’s Ataturk Airport in March 2017, declaring $801,000 in cash upon arrival. The customs declaration form states that the money belonged to Star Crystal.

Saimaiti also provided reporters with a Turkish declaration in which another Kyrgyz courier stated that he had brought 10.48 kilograms of gold to Istanbul the same month. Star Crystal is listed as the owner of the gold. The previous summer, the same courier had also deposited $9,880 to the Turkish bank account of Saimaiti’s wife, who withdrew that precise amount the next day. The same account was used a few months later to send one of her two “donations” to the Matraimovs’ charity.