There are many reasons the wealthy from around the world flock to the luxury property market in Dubai. But for some, a key draw is the secrecy the emirate offers, since land records there are not available to the public.

Among them is the wife of Raimbek Matraimov, a powerful former deputy head of Kyrgyzstan’s customs service. Reporters have found that she is an investor in a five-story mixed-use building under development in a fast-growing Dubai district.

Her co-investors in the building include the Abdukadyr family, a shadowy Uighur clan that has built an underground Central Asian cargo empire worth hundreds of millions of dollars.

These findings are part of a wider investigation by RFE/RL’s Radio Azattyk, OCCRP, and its Kyrgyz member center, Kloop, that details the operations of this business and, in its reliance on bribes to customs officials, implicates Matraimov himself.

A central player in this story was a self-confessed money launderer who turned on his former employers, described the customs scheme to reporters, and provided corroborating documents. He was murdered in Istanbul earlier this month. Before his death, he also pointed reporters to Dubai, suggesting that Matraimov may have partnered with the Abdukadyr family in investments there.

Though he provided no documents to support this claim, reporters found the joint investment by Matraimov’s wife and the Abdukadyrs in the Dubai development — the first documented proof of the two families in a formal business partnership.

The leaked database of property and residency data was compiled by real estate professionals, obtained by the non-profit group C4ADS, and provided to OCCRP. Though the data does not contain precise dates of purchase, it does show the properties’ locations and in many cases their prices, as well as buyers’ contact details.

In addition to the mixed-use building, which is scheduled to be completed by the end of the year, Matraimov’s wife, Uulkan Turgunova, also purchased the plot of land it sits on, as well as another plot and an apartment in the city. Turgunova acquired these properties for a total of at least $12 million sometime between 2015 and 2017, according to leaked property data.

The two plots of land Turgunova purchased are in Jumeirah Village Circle, a district of villas and townhouses, many still under development, that lies alongside the emirate’s main thoroughfare. The apartment she purchased is in a building due to be completed at the end of this year in the nearby Jumeirah Beach Residence community. 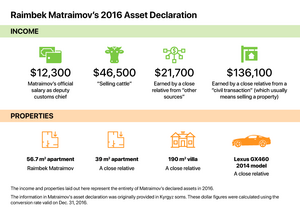 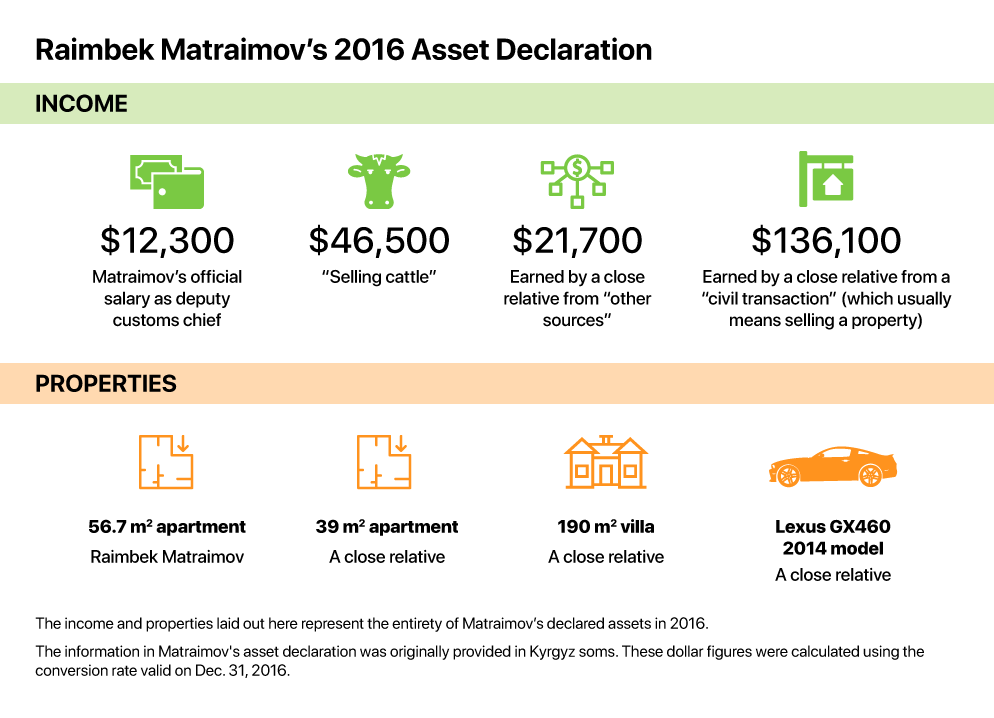 Credit: OCCRP Matraimov’s 2016 asset declaration does not paint a picture of a family that could afford a $12 million investment. Click to enlarge.

These properties, as well as Turgunova’s partnership with the Abdukadyrs, are of interest because the origin of the millions of dollars they represent is difficult to explain through Matraimov’s reported income. None of these possessions have ever appeared in his publicly available asset declarations, which are mandatory for Kyrgyz public servants (and also cover their immediate families).

Since the leak does not show the exact date of Turgunova’s acquisitions, it is possible that she bought the Dubai properties in 2017 and they appeared on that declaration. However, Raimbek Matraimov’s 2016 declaration shows his family’s income that year to be just under $217,000, with only $12,530 of that from his official salary (the rest was from other sources). His declaration from the previous year shows only his official salary of $7,739.

Matraimov, who has worked as a public official for most of his life, is notorious in Kyrgyzstan for his vast rumored wealth, which has earned him the popular moniker “Raim Million.” A 2017 Radio Azattyk investigation found that his family’s lavish mansion in Osh is not commensurate with their declared income.

The evidence linking Turgunova to Abdukadyr family goes beyond the leaked property data.

Khabibula Abdukadyr’s relatives use several last names, including Hadeer, Palvan, and Aibibula. For simplicity, the family is referred to in this story as the Abdukadyrs because Khabibula Abdukadyr is the head of their business empire.

According to a report by the BNC Network, an industry group that maintains what it calls the largest construction intelligence database in the region, the development is a five-story mixed-use building due to be completed by the end of this year. The report also lists the four entities behind the project and their unique roles. Turgunova is listed as an investor. Another is Maimatili Hadeer, a brother of Khabibula Abdukadyr known to be active in the Abdukadyr family’s business network. A third participant is AKA International, a company controlled by Khabibula Abdukadyr, the eldest brother and leader of the family. 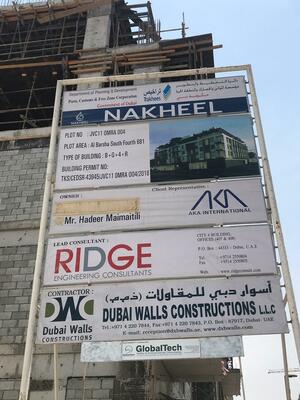 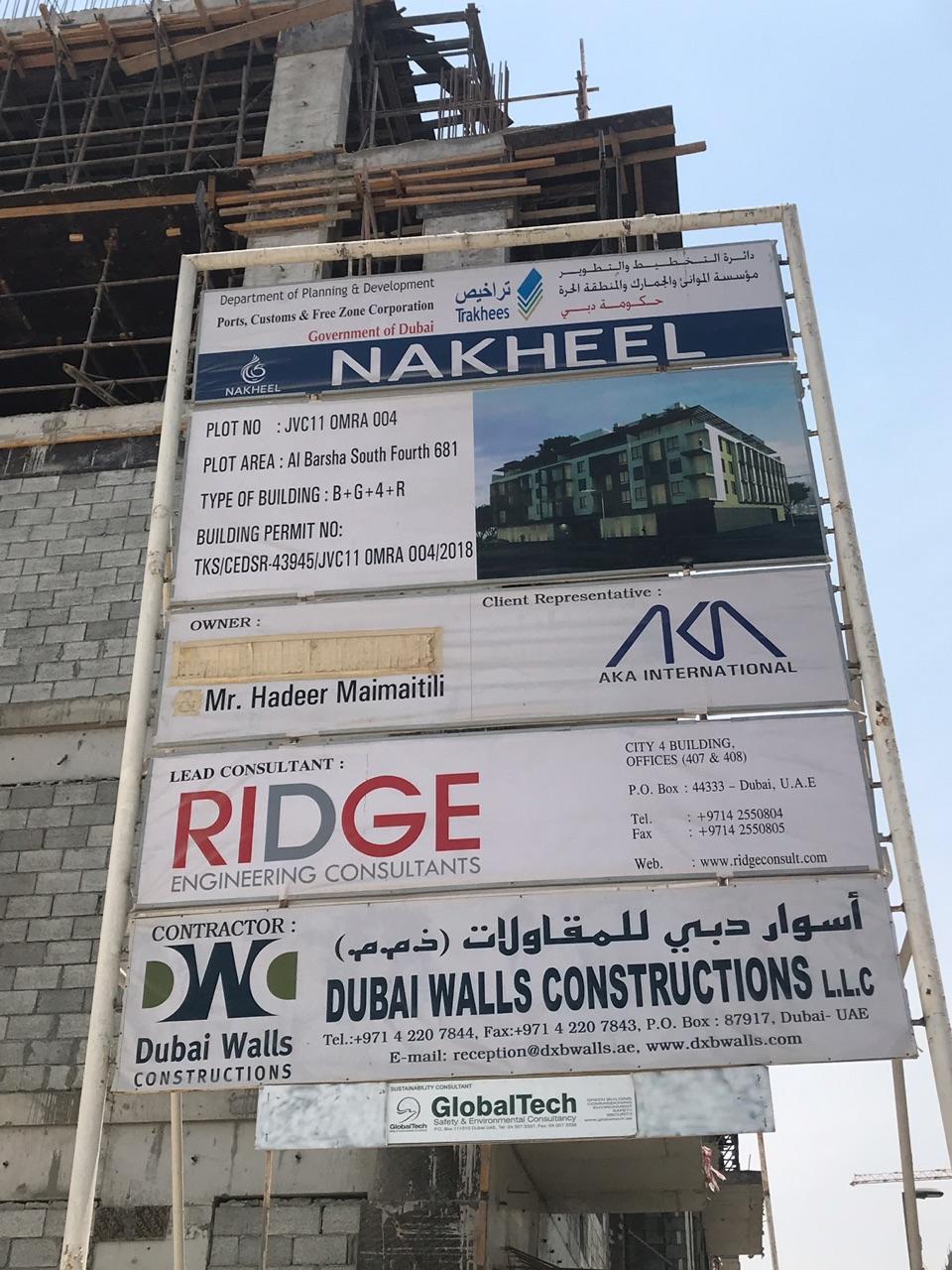 Credit: OCCRP/Kloop The informational notice by the ‘Habib Residences’ building.

A second piece of evidence comes from one of the project’s contractors. A list of projects published on the company’s website lists Turgunova and Maimatili Hadeer as the two owners of the project.

Having located the project site on a city planning document, reporters paid a visit. Like many other places in Dubai, the site is separated from other buildings by empty expanses of desert, and is easily accessible only by car. The grounds are guarded by private security forces and police patrols, who eventually evicted reporters from the area.

An informational notice next to the mostly finished building lists three of the four investors also mentioned in the BNC Network report: Hadeer, AKA International, and Nakheel, a Dubai property developer. When reporters visited in August and September, they found that a fourth name was obscured by tape.

The sign also features an architectural rendering of the finished building that is nearly identical to one included on the resume of Alexander Karmeinsky, a German architect who has done other work for the Abdukadyr family. The development is identified as “Habib Residences Apartments building - JVC Dubai,” and is described as an 82-unit residential building with retail on the ground floor, a gym, “and rooftop pools directly facing the new Jumeirah Village Circle shopping mall.”

Karmeinsky lists the owner of the project as AKA International.

Raimbek Matraimov could not be reached for comment. Multiple members and representatives of his family did not respond to requests for comment, though an assistant of Raimbek’s brother Iskender asked for more time. Due to security concerns involving the timing of publication, this request could not be honored. A lawyer who has represented Raimbek Matraimov said she no longer works for him and declined to comment.

Representatives of the Abdukadyr family, the customs service, and Kyrgyz law enforcement did not respond to repeated requests for comment.