“If you share them, we will kill you,” he recalled the voice on the line as saying.

The caller, Saimaiti said, was a Kyrgyz criminal figure who was referring to a set of sensitive documents. The warning may have come as little surprise. Just days earlier, Radio Azattyk, the Kyrgyz service of RFE/RL, had aired an investigation showing that a foundation run by the country’s powerful Matraimov family received nearly $2.4 million from a shadowy business network.

The family’s best-known member is Raimbek Matraimov, an influential former deputy head of Kyrgyzstan’s customs service. Matraimov, who has worked as a public official for most of his life, is notorious in the country for his vast rumored wealth, which has earned him the popular moniker “Raim Million.” 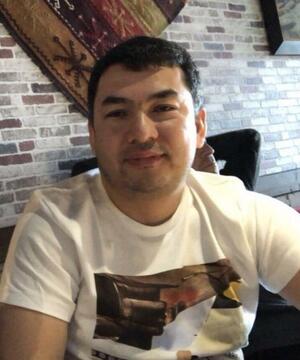 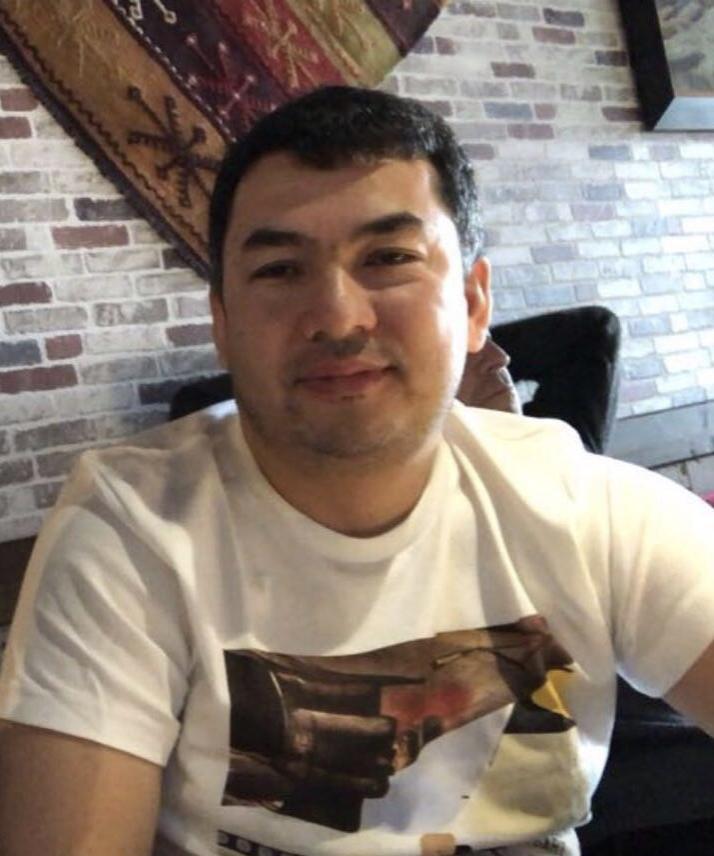 To protect Saimaiti, Radio Azattyk did not disclose that he had provided reporters with key findings — and a paper trail.

But due to the central role he played in the transfers, Saimaiti was one of very few people on earth who would have had access to these documents. The caller appeared to have done the math, and was now intent on preventing any further disclosures.

“If you share the documents for a second episode, we will kill you,” he repeated.

Nonetheless, Saimaiti continued to talk to reporters. The evidence he provided enabled Radio Azattyk, OCCRP, and its Kyrgyz member center, Kloop, to conduct an in-depth, months-long investigation that expanded and further corroborated Radio Azattyk’s earlier work. That investigation confirmed Saimaiti’s claims that, for years, he had worked as a professional money launderer for the shadowy Abdukadyr clan, and painted a picture of a Central Asian cargo empire the family had built with Matraimov’s backing.

But one loose end remained. The earlier Radio Azattyk reporting had used documents provided by Saimaiti to raise questions about the origins and purpose of the $2.4 million in payments, which took place in 2016 and 2017.

Two of these documents — original bank transfer slips each showing $100,000 wires sent to the “Ismail Matraimov Charitable Foundation” by Saimaiti’s wife — confirmed $200,000 of that total.

Using a leaked database of real estate purchases in Dubai, a separate investigation shows that the Matraimov family and the Abdukadyrs are in business together.

But the other documents, which attested to the remaining $2.2 million the foundation received, had been sent to reporters electronically. This meant that they could not be independently verified, leaving open the possibility that they had been doctored.

Accusations to this effect were soon aired in Kyrgyzstan. The Matraimov family immediately dismissed the allegations, admitting only to the $200,000 figure reporters had substantiated with paper records, and describing even this as a zakat — an Islamic form of charity. The Matraimovs denied any connection to the Abdukadyr family, and the authorities took no action. 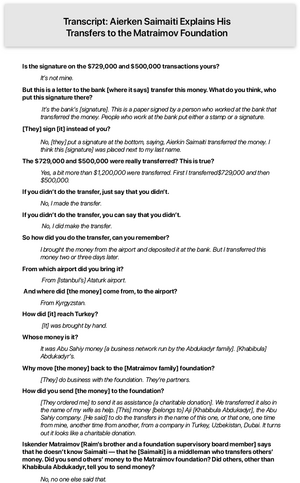 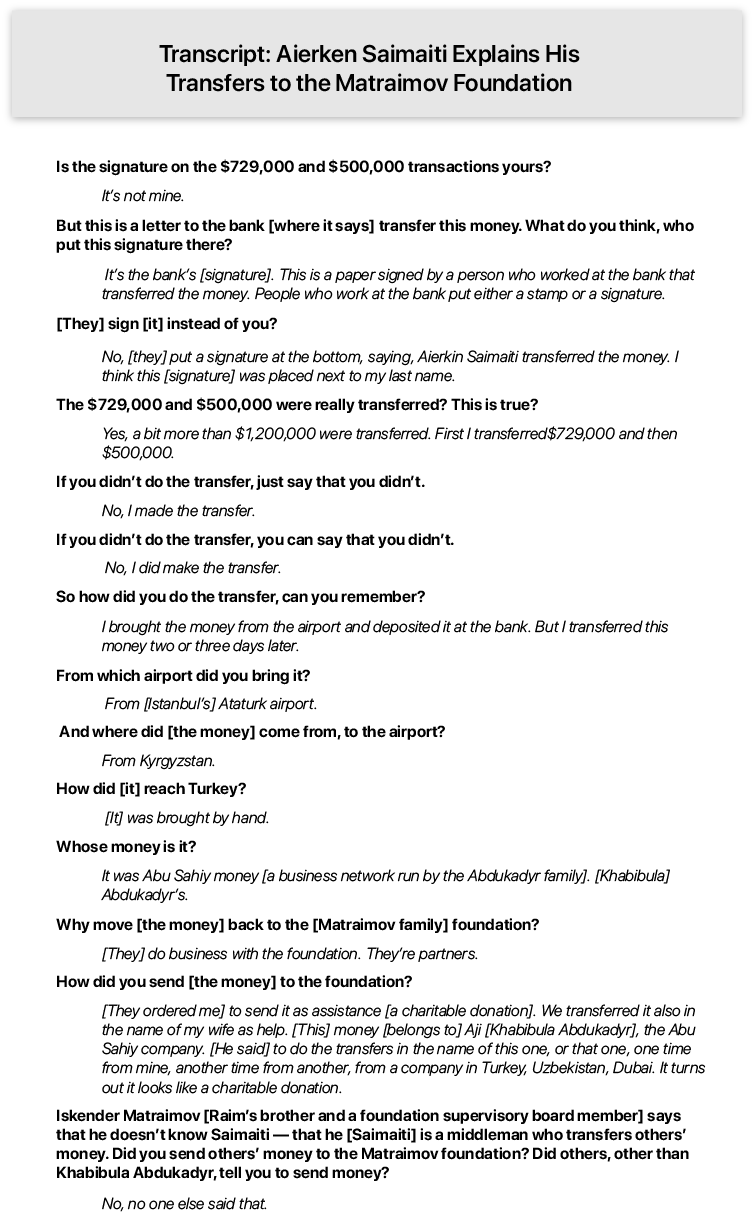 Credit: OCCRP This phone conversation between a reporter and Aerkin Saimaiti took place in September. This transcript has been translated from Kyrgyz to English and lightly edited for clarity. Click to enlarge.

The public wanted answers. So reporters kept digging, pressing Saimaiti to provide original transfer slips for the other transactions as well. Saimaiti held firm, insisting repeatedly that the transfers had taken place and that they had been carried out under his watch. But he was reluctant to provide the original documents, making promises, then disappearing for days and giving evasive answers as to why he needed more time.

Two transactions of $729,000 and $500,000 shown on screen in the Radio Azattyk program raised particular concerns, since they were documented by digital payment orders that appeared to contain an image of a signature that was not Saimaiti’s.

In a September conversation, Saimaiti kept insisting that these transfers were real, describing how couriers had flown the cash from Kyrgyzstan to Istanbul’s Ataturk airport. He said he had personally picked it up from the airport, brought it to the bank, deposited it, and made the transfer several days later.

Given the opportunity to correct the record if the transfers hadn’t happened — “If you didn’t do the transfer, [you can] just say that you didn’t,” the reporter asked — Saimaiti was adamant. “No, I transferred” he said. “I did transfer.” 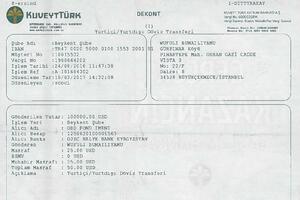 But as the weeks passed by, and Saimaiti shared numerous other records, he still did not produce the Matraimov foundation documents. Finally, he opened up about his reluctance, telling reporters about the threatening phone call he had received shortly after the original program aired.

The caller, he said, had been particularly focused on whether Saimaiti was the source of the documents Radio Azattyk had disclosed, and if he was, whether he had more.

In recounting the conversation to reporters, Saimaiti said he told the caller that he had given up nothing: “I said that the original documents remained in Kyrgyzstan, the $200,000 [ones] also. I said that the rest were with me. And he kept asking me: ‘For certain? The rest are with you?’”

In Saimaiti’s telling, the caller didn’t sound convinced. “So you did give [the documents],” he asked him. 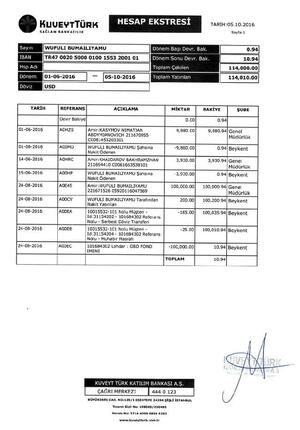 Credit: OCCRP The bank statement Saimaiti provided shows that the account, which had been opened in the name of his wife, shows little activity beyond the single $100,000 transfer — a common sign of money laundering. Click to enlarge.

“They are very dangerous,” Saimaiti said, describing the people behind the phone call. “One piece of paper can seal my fate.”

In late October, Saimaiti met with reporters in Istanbul in what would turn out to be their last face-to-face conversation. In an hours-long meeting at an Italian restaurant on the shores of the Bosphorus, he provided some additional documents — but still not the originals verifying that the Matraimov foundation payments had taken place.

Saimaiti promised to take a reporter to the bank the following morning to show additional evidence related to these payments. But he appeared to have had a change of heart, and didn’t show up.

In a subsequent text message exchange, he said he would provide “a lot, a lot” of documents about Raimbek Matraimov after November 14, when he expected to receive Turkish citizenship, which he felt would protect him from extradition if Kyrgyz officials went after him through international law enforcement.

Saimaiti was last seen online in the early evening of November 10. A few hours later, he was shot dead in an Istanbul cafe four days short of his own deadline. According to news reports, Turkish police have arrested four suspects in the case.

Saimaiti clearly did have more documents. Before his death, he left several more with an intermediary. Among these was a bank statement additionally confirming one of the $100,000 transactions to the Matraimov foundation. His possession of this document confirms that he had the ability to access bank records related to the transfers.

Saimaiti never got a chance to fully deliver what he promised. But this account gives him one last chance to tell the world what he knew.

Raimbek Matraimov could not be reached for comment. Multiple members and representatives of his family did not respond to requests for comment, though an assistant of Raimbek’s brother Iskender asked for more time. Due to security concerns involving the timing of publication, this request could not be honored. A lawyer who has represented Raimbek Matraimov said she no longer works for him and declined to comment.

Representatives of the Abdukadyr family, the customs service, and Kyrgyz law enforcement did not respond to repeated requests for comment.