For years, Gennadiy Trukhanov, the mayor of the Ukrainian port city of Odesa, has denied ever being a Russian citizen. Officials from both countries have backed him up.

But in the latest release of Panama Papers documents, reporters found what appears to be incontrovertible proof that Trukhanov has held Russian citizenship: a copy of his Russian passport.

The file was found among a fresh trove of leaked documents from Mossack Fonseca, the law firm at the center of the original Panama Papers leak in 2016.

If authentic, this could mean trouble for Trukhanov (who is also under investigation for corruption) because holding a second citizenship is illegal in Ukraine — and because Russian citizenship, in particular, is politically sensitive in a country that has been at war with Russian-backed separatists since 2014.

The finding could also prove awkward for the Ukrainian officials who said they looked for Trukhanov’s Russian passport and never found it.

Indirect evidence of Trukhanov’s Russian citizenship appeared in the earlier release of the Panama Papers in April 2016.

In that data, reporters found connections between the mayor and several companies registered in the British Virgin Islands, an offshore tax haven. Most were involved in the construction business in the Ukrainian capital of Kyiv and Odesa.

To register these companies, Trukhanov used an address in the Russian city of Sergiev Posad, which could mean he held Russian citizenship.

After the story came out, Trukhanov released a denial from the Russian Consulate General in Odesa.

“This is a confirmation that Gennadiy Trukhanov has not acquired citizenship of [the] Russian Federation and he is not a Russian citizen,” read the document, dated April 14, 2016 and signed by Valeryi Katunkin, the Russian consul.

In addition, the Ukrainian Security Service in the Odesa region said it has investigated the possibility of Trukhanov’s Russian citizenship and found no proof.

Still, the story wouldn’t die. Stories about the mayor’s alleged Russian passport periodically appeared in the media and in social networks.

Trukhanov has denied the allegations each time.

Last month, Mustafa Nayyem, a member of the Ukrainian parliament, asked the Ukrainian Security Service and general prosecutor to look into other indications that Trukhanov was a Russian citizen, but was left dissatisfied by their response.

After posting about this on Facebook, he tweeted that his account had been blocked after numerous readers flagged the posts as spam, adding that it looked like “Gennadiy Trukhanov has started to purge the Internet from any mentions of his Russian citizenship.”

The initial release of the Panama Papers was a global phenomenon, a leak of 11.5 million documents that exposed the offshore investments of government officials, celebrities, organized crime figures and even heads of state. 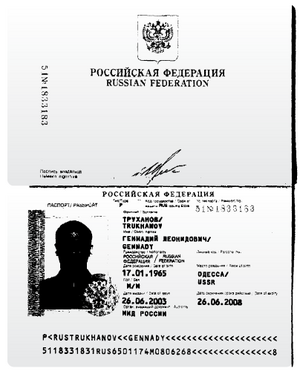 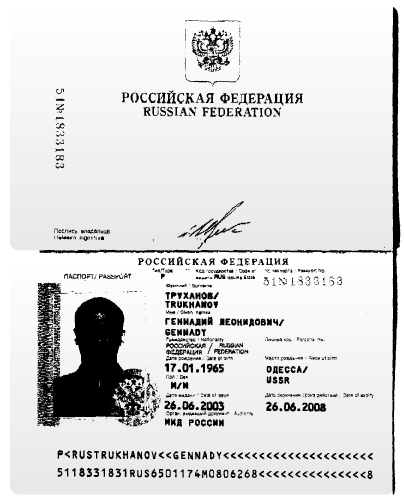 The papers were internal documents and records kept by Mossack Fonseca, a financial services firm that helped clients worldwide set up offshore corporations that could be used, among other things, to hide their wealth.

In the aftermath of the leak, Mossack Fonseca itself was forced to close down, but not before, that very same month, its compliance department emailed a man named Andrey Trotsenko and asked him for updated information about a company called Corderoy Asset Partners Ltd.

This company was mentioned in the Panama Papers as being closely connected to Trukhanov.

Attached to Trotsenko’s emailed reply (in which he said that the company “is not in Good Standing since July 2009”) were copies of ID documents of the company’s shareholders and directors — including a copy of Trukhanov’s Russian passport.

The document, numbered “51№1833183,” was issued on June 26, 2003 by Russia’s Ministry of Foreign Affairs. The day and place of birth in the document correspond to Trukhanov’s official biography.

This contradicts the denials of the Russian consulate in Odesa. Moreover, as a branch of the Russian Ministry of Foreign Affairs, which issued the passport, the consulate must have known the truth.

Trukhanov did not reply to multiple requests for comment for this story.

A Nice Apartment in Moscow

Reporters also found another connection between Trukhanov and Russia.

According to the new Panama Papers files, it turns out that his daughter, Kateryna Trukhanova, also used a Russian address — 18 Lomonosovskiy Prospect, Flat #550, Moscow — to register two offshore companies.

In the official Russian registry, this apartment is listed as being owned by Mariya Trukhanova, the Odesa mayor’s mother.

According to Trukhanov’s official asset declaration, his mother lives with him, which means that he is obliged to declare all of her property. And though, according to the Russian property registry, she has owned the Moscow apartment since 2003, it has never appeared in the mayor’s declaration.

Before retiring, Mariya Trukhanova had worked for 25 years in a state-owned hospital, which in Ukraine implies a very low salary. Other apartments at the Moscow address currently range in price from US$ 300,000 to $900,000.

Oleksandr Voloshyn, a lawyer for the Regional Press Development Institute, a Ukrainian nonprofit organization, says that he told the country’s National Anti-Corruption Bureau about the Trukhanov family’s Moscow apartment in May 2018.

“I have asked [the bureau] to look into why Trukhanov didn’t mention this property in his declaration and how his mother could [have afforded] to buy it,” he says.

The bureau recently replied that it has added information about the apartment to the official investigation against the mayor.

It is investigating three criminal cases against Trukhanov. He is suspected of involvement in corrupt deals with real estate and road construction in Odesa. A separate OCCRP investigation found a number of high-end London properties connected to the mayor and his former associates.