by Anna Babinets and Elena Loginova
Tweet this Share this on Facebook DONATE
Above: Oxford Street, central London. A few minutes’ walk away are a number of properties connected to members of Odesa’s “oil mafia.” Credit: OCCRP

The mayor of Ukraine’s southern city of Odesa, Gennadiy Trukhanov, has long denied having any remaining connections to the city’s 1990s-era “oil mafia” or its leader, Aleksander Angert.

But the 2016 purchase of a luxury London apartment by an offshore company formerly owned by members of the mayor’s family — and now occupied by Angert’s daughter — strongly suggests otherwise.

As reported by OCCRP, members of the former oil mafia own a number of luxury apartments in London.

At issue is one of these, a $5.2 million flat in the affluent neighborhood of Marylebone, which was purchased by unknown individuals in 2016 via an offshore company registered in the British Virgin Islands (BVI).

Just a year prior, that company had belonged to Trukahnov’s common-law wife and daughter, Tetyana Koltunova, 51, and Kateryna Trukhanova, 31, according to documents from the Paradise Papers leak.

The Paradise Papers is a major leak of documents from two offshore services firms based in Bermuda and Singapore, as well as from 19 corporate registries maintained by governments in secret offshore jurisdictions. The documents were obtained by the Süddeutsche Zeitung and shared with the International Consortium of Investigative Journalists (ICIJ), which organized a collaborative investigation with dozens of outlets across the world, including the Organized Crime and Corruption Reporting Project (OCCRP).

OCCRP worked with BBC Panorama on this investigation.

Lawyers of the registration agent who handled the real estate disputed that the purchase had anything to do with Trukhanov or his family. They said the BVI firm was no longer owned by the women when the apartment was purchased in 2016. The claim could not be independently verified because BVI company ownership records are not open to the public, and the lawyers did not provide any further information, saying it was “confidential.”

There is evidence, however, that the apartment’s new owner may be connected to Angert, Trukhanov’s old mafia associate. On April 20, reporters saw Angert’s daughter, Anya Angert, 25, on the apartment’s balcony.

The connection shows that, even long after becoming Odesa’s mayor, Trukhanov still maintains ties with his old criminal associates.

Trukhanov is under investigation by Ukrainian officials, who are looking into the possible theft of millions of dollars in public money.

The Chilterns is a chic London building on Paddington Street in Marylebone where penthouses cost at least £25 million.

Nearby are the lush Regent’s Park, posh restaurants, trendy cafes, and the location of Sherlock Holmes’ fictional Baker Street office. The exclusive shops of Oxford Street are just a bit further.

According to the developer, The Chilterns has all the latest amenities one could want: from a relaxing spa and modern gym to a cinema and wine cellar. In 2014, Angelina Jolie and Brad Pitt considered buying an apartment in the building.

Jolie and Pitt did not end up at The Chilterns — but someone else did.

Credit: OCCRP The Chilterns, a luxury residential development in central London, as seen from Paddington Gardens.

According to British property records, an offshore company registered in the BVI called Peninsula Property Holdings S.A. paid £3.7 million (about $5.2 million) for a fifth floor apartment in the building in 2016. 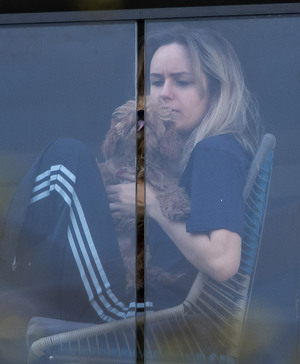 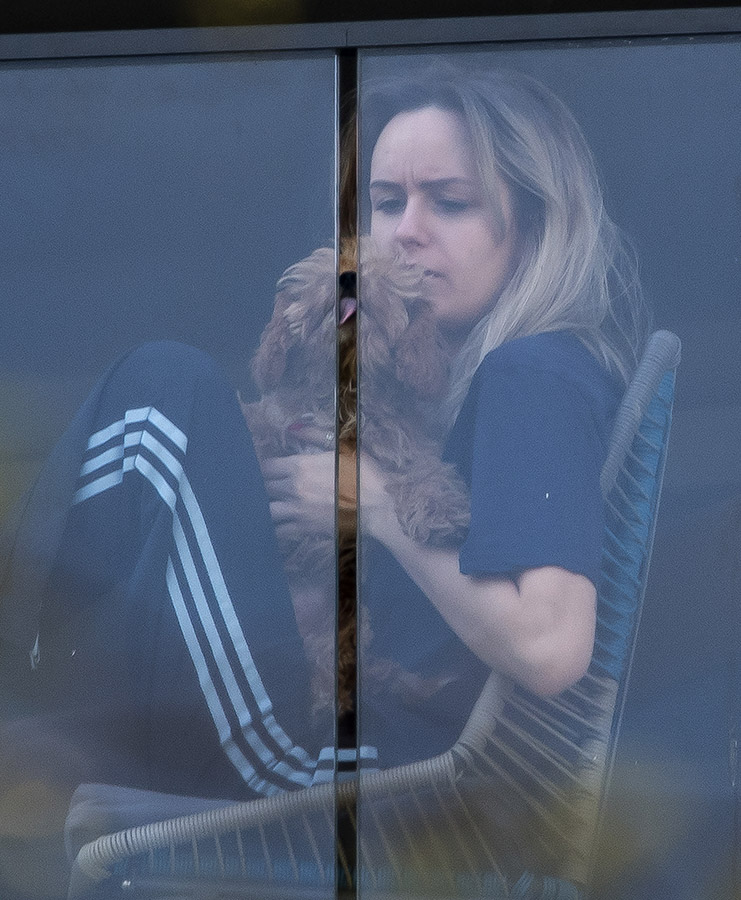 Credit: BBC Panorama Anya Angert, with dog, spotted on the balcony of an apartment at The Chiltern, Marylebone.

The owners of Peninsula Property are unknown. But an investigation into BVI corporate records show that the company’s shareholder in 2015 was another company registered on the islands called Squadra Azzura Corporation. And the shareholders of this company were Koltunova and Trukhanova.

When OCCRP reporters visited the address, a concierge said he had never heard of Trukhanov or his family. When reporters showed him photos of Trukhanov, his wife, and his daughter, he said that he had never seen them. “I’ve been here for two years and I remember faces more then I remember names. The face I would recognize… There are a few Russians [in the building], but they are not people from Ukraine.”

But there’s at least one person from Ukraine in the building. Over the course of a day, BBC reporters saw Anya Angert several times on the balcony with her dog (named “Monkey,” according to her Instagram account). The same photos appear to show an apartment similar to those at The Chiltern, and in her posts, Angert describes her location as “Paddy.” The Chiltern is located on Paddington Street.

Anya Angert did not respond to questions texted by an OCCRP reporter.

Trukhanov himself should not be wealthy, based on his $300 per month mayor’s salary.

His family has no business abroad that OCCRP could identify. In Ukraine, they owned Kvitkovyy Passage, a real estate company in Odesa, from 2008 through 2016. However, according to a commercial database, its annual profits were modest, never exceeding $21,000 in any year while Trukhanov’s family owned it. His wife also co-owns a small local TV station, but it has not been profitable in recent years.

In his official asset declaration, the mayor does not mention his wife, her income, or her assets, as he is legally obliged, implying that they have divorced (she also no longer uses his last name). But they regularly appear in public as a couple, in particular on the red carpet of the annual Odesa film festival, and seem to spend time together.

Ukrainian property registers do show that Trukhanov and his family own several apartments in new buildings around Odesa that are also not included in the mayor’s declarations — perhaps because they belong to his daughter, who lives separately, and his “ex-wife.” There is no legal requirement for public officials to declare property that belongs to former spouses or children who don’t live with them.

During a public event in late March in Odesa, BBC journalists tried to ask Trukhanov about the London apartment. His entourage reacted aggressively, shouting, pushing away a reporter, and hitting the camera of another. The mayor refused to grant a private interview, and after the event he denounced the journalists as provocateurs.

A 2016 OCCRP investigation, based on documents from the Panama Papers — a separate leak of documents on offshore investments — brought to light Trukhanov’s connections with the Rost Group, a large construction conglomerate based in Odesa.

Numerous companies in the group, and connected to it, have won and continue to win millions in road construction tenders from both national and local budgets, and Rost has grown enormously since Trukhanov became mayor four years ago. However, the mayor has steadfastly denied any involvement. 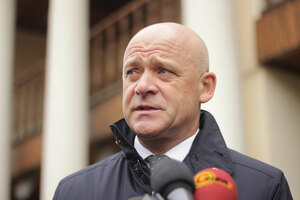 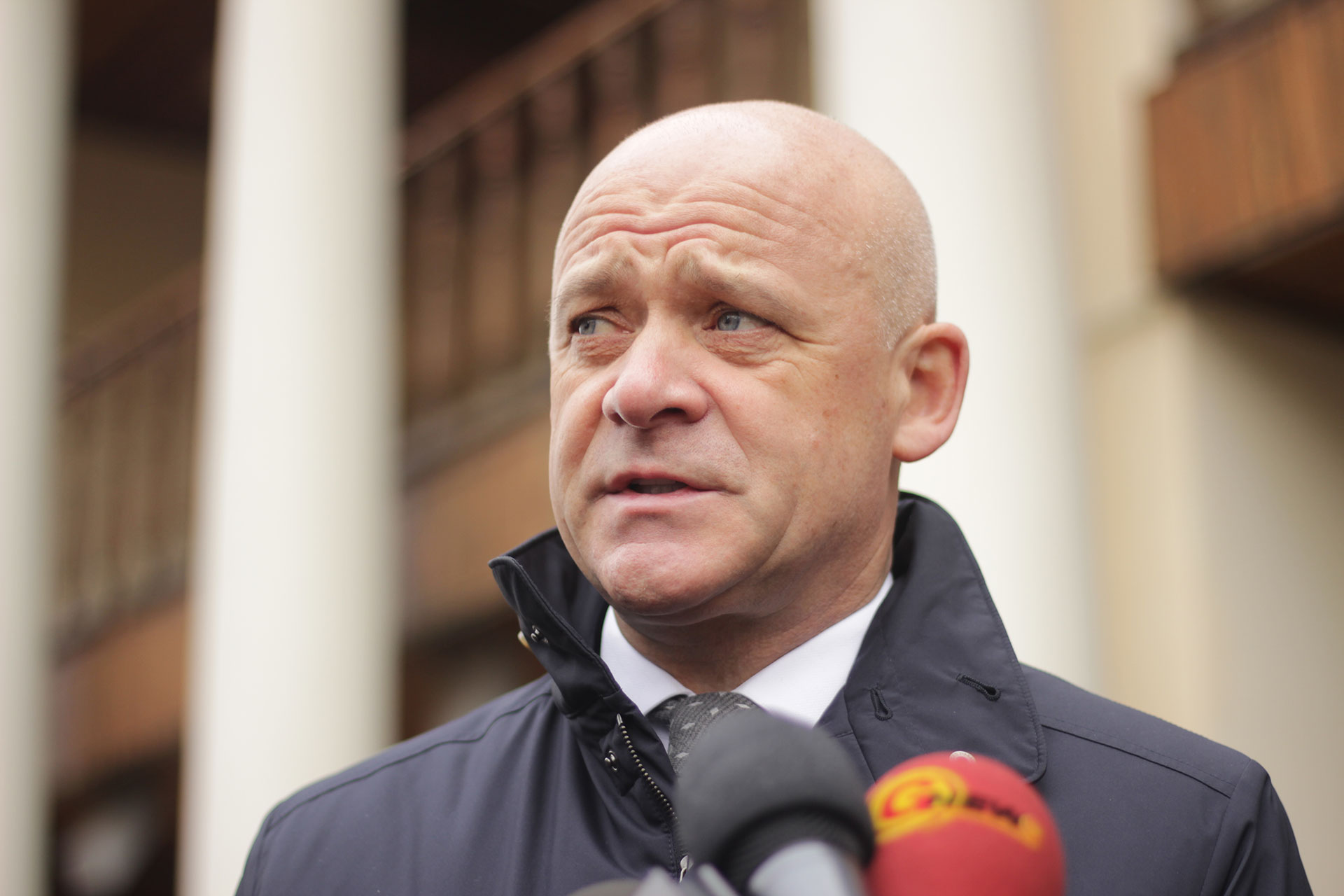 In October 2017, detectives from the National Anti-Corruption Bureau (NABU) seized documents from the mayor’s home and began a corruption investigation against him. Five companies, including two Rost subsidiaries and three partners; Trukhanov himself; and some of his allies are suspected of colluding with the Odesa city government to secure road building contracts.

Since 2014, these five companies have received 8.1 billion hryvnia ($300 million) from the Ukrainian budget. Investigators have established that some of the money was stashed in offshore accounts. (An earlier 2013 investigation into one of these companies appears to have stalled for unknown reasons.)

A search of the five companies’ business records shows that, in each one, a friend or former business partner of Trukhanov is listed as a shareholder or director. Some were members of the Odesa oil mafia, as previously reported by OCCRP.

Mykhaylo Starushkevych, head of Rost Group’s finance department, told reporters that the criminal cases have not prevented the group from continuing to do business with the government.

The NABU detectives “did not take the originals of the documents,” he said. “They took what interests them, then they made photocopies … They looked at computers at the office. Practically nothing was taken.”

Starushkevych is right: The two Rost companies and their partners are still receiving money from the national budget even though they’re under investigation.

Trukhanov quit going to work soon after the criminal cases were opened and spent one and a half months abroad. When he returned in February, police detained him at Kyiv’s Boryspil airport in connection with a separate corruption case. But the court released him the next day and he returned to the mayor’s office.

It’s no coincidence that managers or shareholders connected with the five companies under investigation were once in the Odesa criminal gang. Trukhanov is known to have been a member of the group as well.

His name appears in a 1998 Italian police report which explains that the group controlled oil shipments from the country and often met in Italy. Its members held passports from different countries and were suspected of money laundering, drug trafficking, and smuggling, according to the report.

The gang no longer operates. But the London apartment connection suggests that Trukhanov’s ties to its former members were active as recently as 2016. 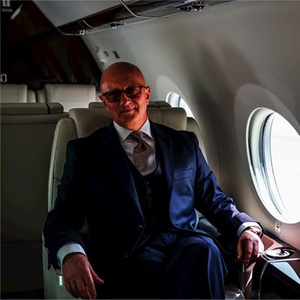 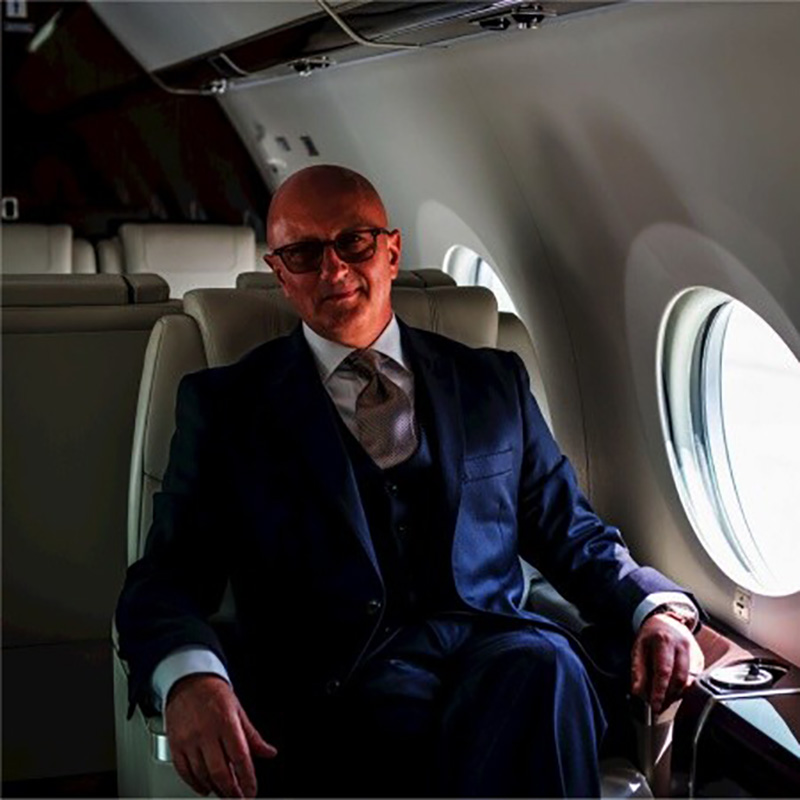 Credit: Popivker’s LinkedIn profile Lawyer Alexander Popivker, who appears to have long-standing business relations with a number of businessmen close to Trukhanov.

A key link is Alexander Popivker, apparently the man in charge of taking care of the legal details of the property. Reporters learned this from the Paradise Papers, which show him emailing Appleby, a law firm that administers thousands of offshore companies, in June 2015.

In an email, Popivker requests that Peninsula Property Holdings — the company that subsequently bought the London apartment — be reactivated after having been dormant for some time. At Popivker’s request, the company was then transferred from Appleby to another offshore administrator. These operations may have been in preparation for Peninsula’s purchase of the apartment.

Popivker also runs his own British company — Rubicon Capital Consulting — which administers dozens of offshore entities. His clients include shareholders and directors of some of the Trukhanov-connected companies under investigation.

In effect, Popivker occupies a key role in a network that encompasses Trukhanov, his family members, his current business associates, former members of the oil mafia, and members of the Odesa mayor’s family — and in all of these people’s ability to park their millions in luxury London real estate.

Popivker also has a very personal connection to the Odesa oil mafia: He is married to and business partners with Anna Angert (Popivker), who is likely Aleksander Angert’s sister.