“Your Holiness! Dear friends! I’m more excited than ever to speak today,” said Sergei Lavrov, Russia’s foreign minister. “Because it’s not about work, but a call from the heart.”

Standing at the altar, surrounded by priests wearing gold-trimmed vestments, Lavrov was addressing Patriarch Kirill and other church and lay officials at an elaborate consecration ceremony.

The Church of St. Sergius of Radonezh, near the old Tsarist estate of Tsarskoe Selo, had been rebuilt after being destroyed during the Soviet era. Lavrov, who rarely betrays much emotion in his public appearances, said he was moved to have been invited to head up the board of trustees. 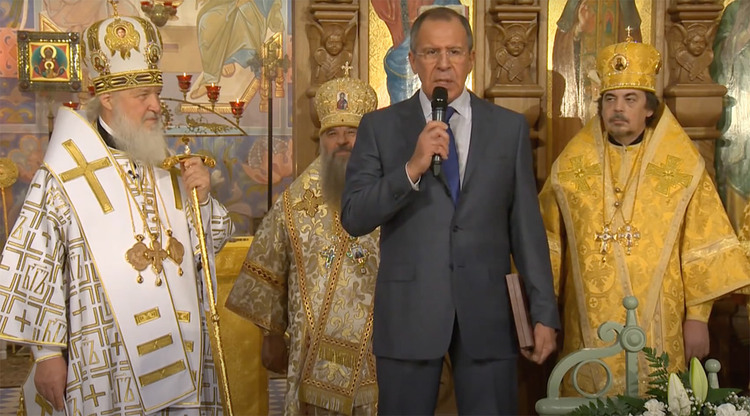 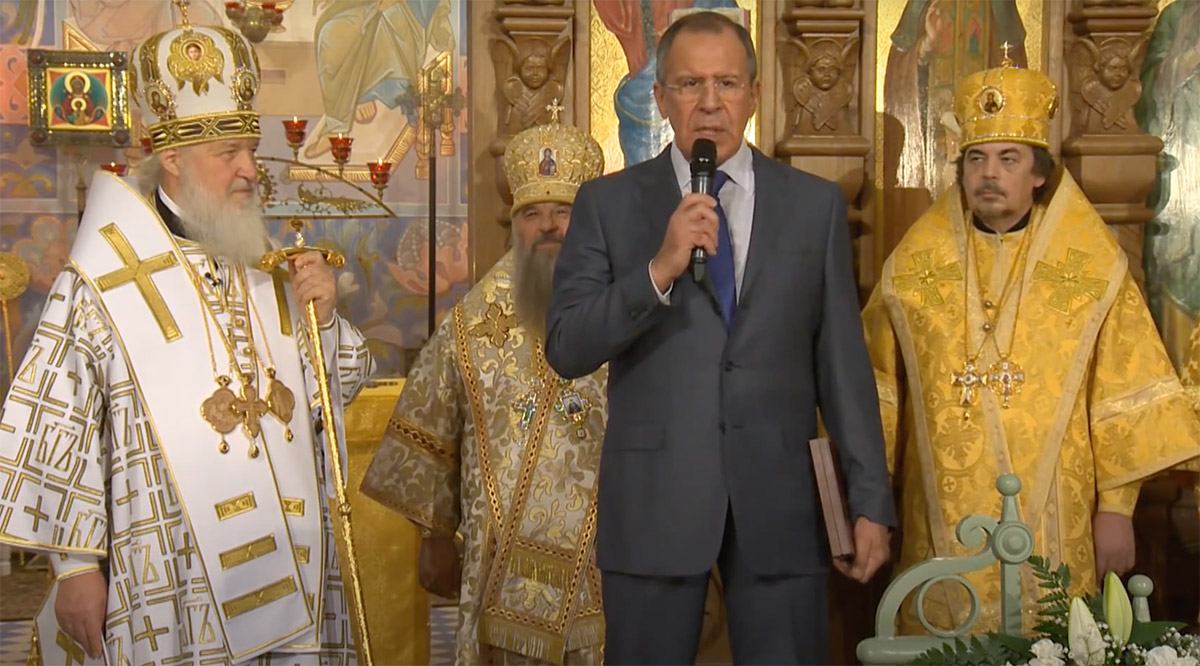 President Vladimir Putin himself was in attendance. The longtime Russian leader toured the church with Lavrov, the patriarch, and a representative of the church museum, admiring a uniform worn by Emperor Nicholas II and other historical artifacts.

But a video of the December 8, 2014 event, posted on YouTube by the Russian Orthodox Church, reveals a curious detail. During the entire visit, an unknown woman wearing a black cloak and white shawl was seen accompanying the group.

Her identity was revealed later that day, when the patriarch presented her with an award for her help restoring the church.

“Svetlana Alexandrovna Polyakova, an employee of the Ministry of Foreign Affairs of the Russian Federation, is awarded the Order of the Russian Orthodox Church of St. Euphrosyne, Grand Duchess of Moscow, III degree,” a clergyman intoned. 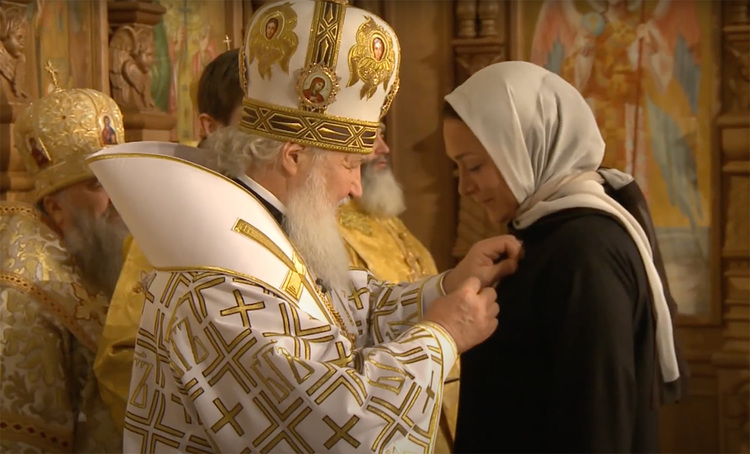 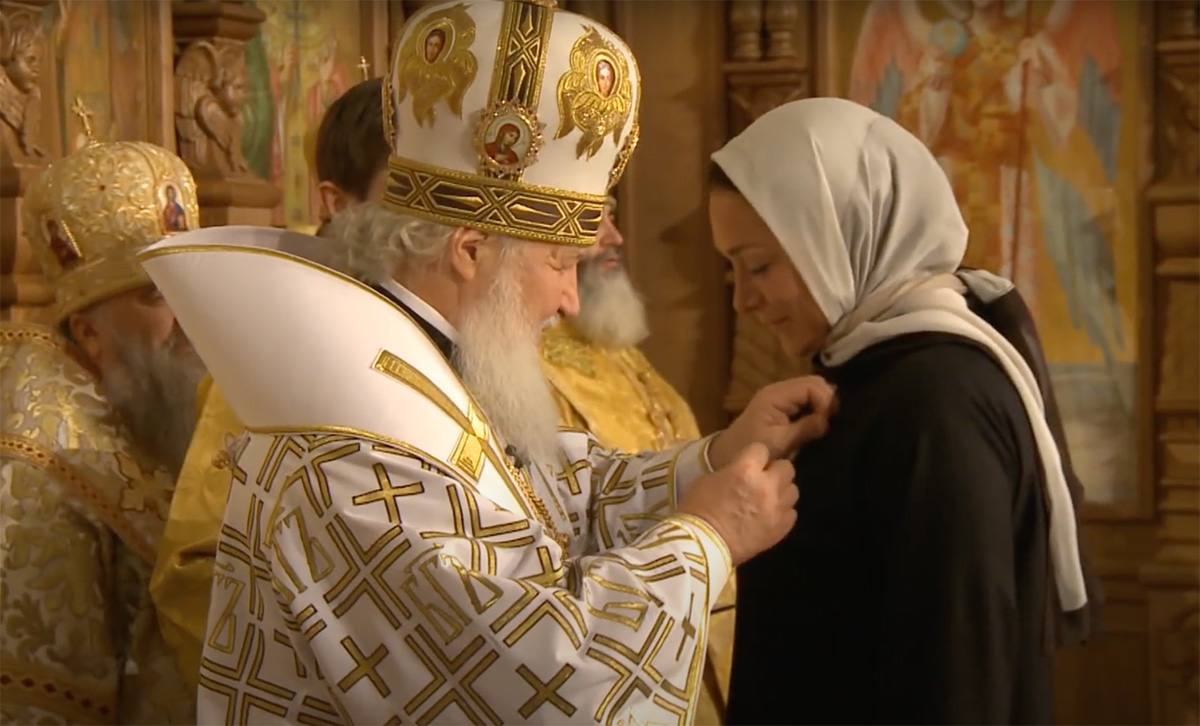 But Svetlana Polyakova is no ordinary bureaucrat.

For years, a source close to a foreign ministry official told reporters, she has had a very close relationship with Lavrov. Reporters found that, in addition to accompanying him around the Church of St. Sergius, she has travelled with him to Sochi and St. Petersburg. She has even appeared in cell phone address books under his last name.

Polyakova also has substantial assets that a mere “employee of the Foreign Ministry” would almost certainly not be able to afford. Property records show that she and her family own real estate in Russia and Great Britain worth about 1 billion rubles ($13.6 million).

Polyakova and the Ministry of Foreign Affairs did not respond to requests for comment.

Lavrov’s decades-long diplomatic career began in the early 1970s, when he served at the Soviet embassy in Sri Lanka. Between 1994 and 2004, he headed Russia’s permanent mission to the United Nations. He was then appointed foreign minister, a post he has held for 17 years.

The 71-year-old, known for his tough and relentless promotion of the Russian government’s interests on the world stage, is one of the country’s most popular and longest serving ministers.

Largely for this reason, Putin asked him to join the ruling United Russia party’s list for this month’s elections to the State Duma. “I consider this offer from the president’s lips an honor,” Lavrov said, explaining his acceptance of the candidacy earlier this year.

Lavrov is married and has a daughter. His annual income declarations, which he is mandated to submit as a top official, show that the couple earned between six and ten million rubles ($100,000 - $136,000) annually over the last five years.

Read more about Russia’s “foreign agent law” and how it’s been used to target journalists: Why Russian Journalists Are Being Branded ‘Foreign Agents’ — And Why It Matters.

The Insider, an independent outlet that the Russian government declared a “foreign agent” earlier this year, has reported that the foreign minister owns high-end real estate worth more than 600 million rubles ($8.2 million), assets that are difficult to square with his declared income.

But even these pale in comparison with what reporters have now found in the possession of his companion, Svetlana Polyakova.

IStories, OCCRP’s Russian partner, first learned about her from a source close to a senior foreign ministry official, who described her relationship with Lavrov as close and long-standing. Moreover, the source said, Polyakova has gained significant influence in the ministry.

For a long time, reporters still could not identify Polyakova because they did not know her patronymic — until it was revealed in the YouTube video of the consecration ceremony. The video also shows the unknown Polyakova walking with an elite group that included Lavrov and Putin as they toured the church, suggesting she had a special status. Appearing close to the president on such occasions takes many levels of approval.

Polyakova’s full name also enabled reporters to track down her phone number. Then they used an app that matches phone numbers to names in contact lists, and found that several people listed her contact information as “Svetlana Lavrova” or “Lavrova Svetlana,” though she has never officially held the minister’s last name. (Before checking Polyakova’s phone number, reporters checked their own and the app returned genuine results — their mobile numbers were listed in other people’s phone books with their correct names and surnames.)

Reporters from IStories obtained this information from a source who has access to flight records databases. To check the accuracy of the database, reporters also ran multiple searches for their own names. They found that while the information about their flights, dates, routes, and travel companions was correct, the database wasn’t exhaustive. This means that Polyakova could have shared more flights with Lavrov than the database shows.

In addition to her work at the Foreign Ministry, Polyakova had several other sources of income.

Until 2012, business records show, she was a co-owner of Consul, a restaurant located inside the foreign ministry’s diplomatic academy in central Moscow.

The restaurant received state contracts to provide meals for students, teachers, and visiting foreign diplomats. But according to financial records, the business was not especially profitable. Between 2015 and 2020, its total revenue was only 120 million rubles ($1.6 million).

Polyakova had several other companies listed as restaurant businesses, but they didn’t bring in high revenues either, according to their financial reports. Nevertheless, according to Russian property records, Polyakova owns properties estimated to be worth around 1 billion rubles ($13.6 million), based on an analysis of comparable real estate listings.

Among her properties is a 260-square-meter apartment in a residential complex in the center of Moscow called Prechistenka 13. This building is located in the so-called “Golden Mile” area, which hosts some of the city’s most expensive apartments. Prechistenka 13’s residents reportedly include relatives of influential businessmen and officials — as well as Leonid Mikhelson, one of the richest people in Russia. 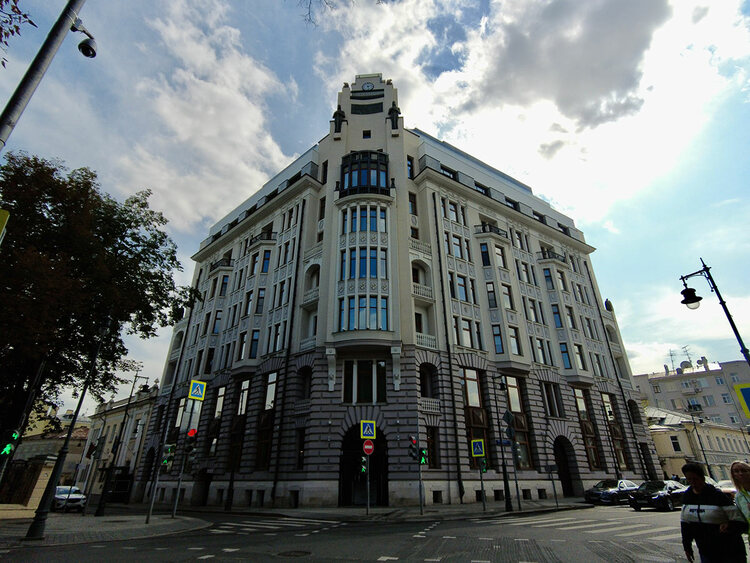 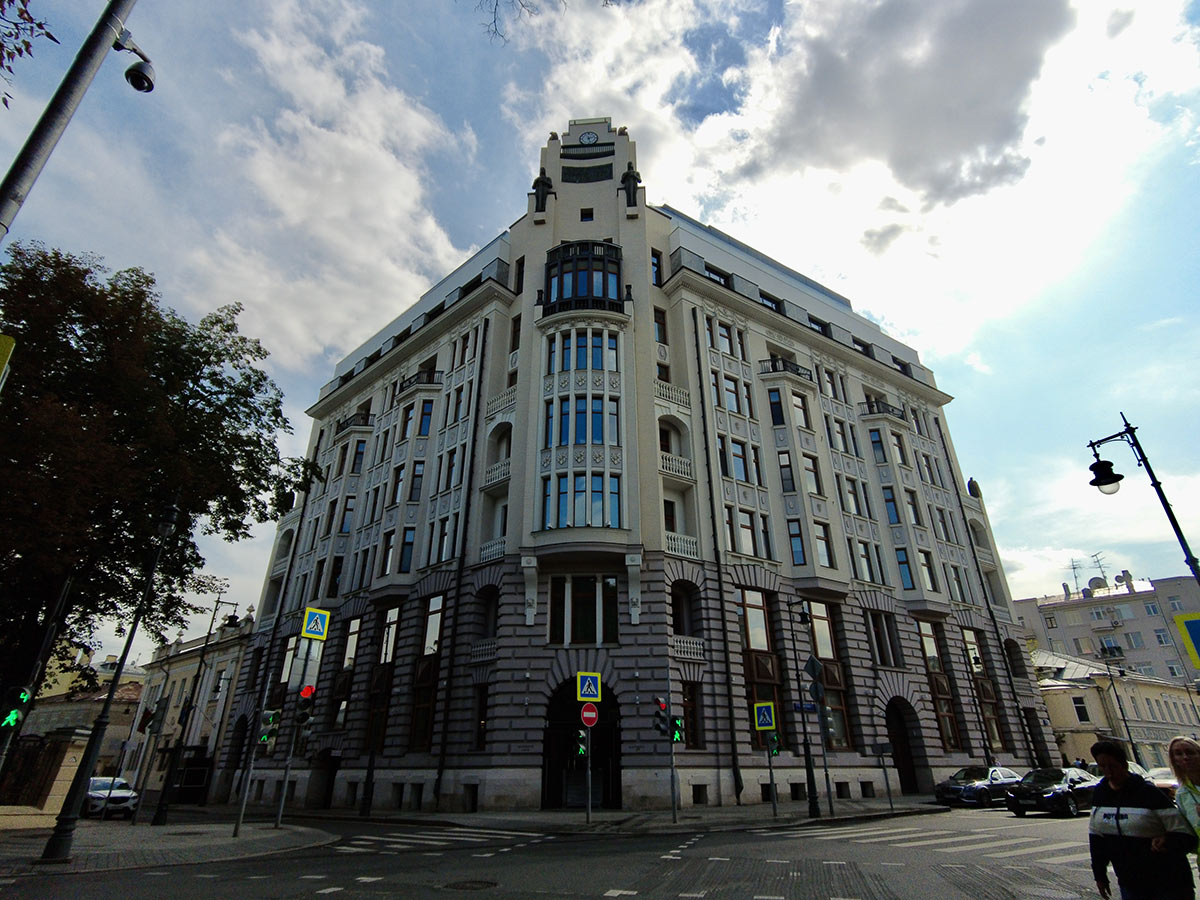 Property records do not reveal the value of a given piece of real estate. But an apartment of almost the same size in the same building is on sale for more than 700 million rubles ($9.5 million). 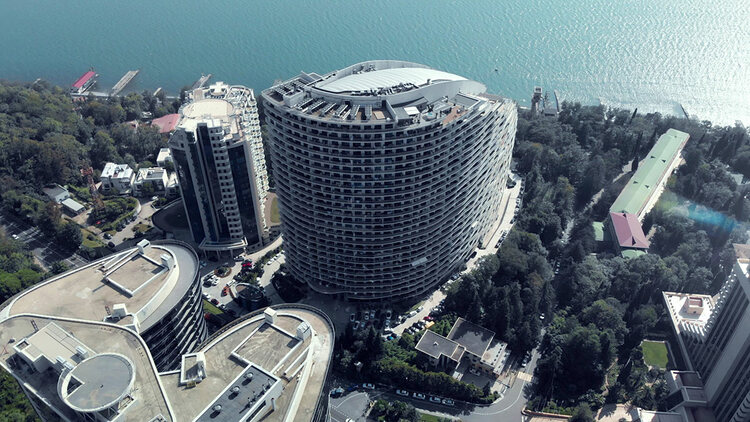 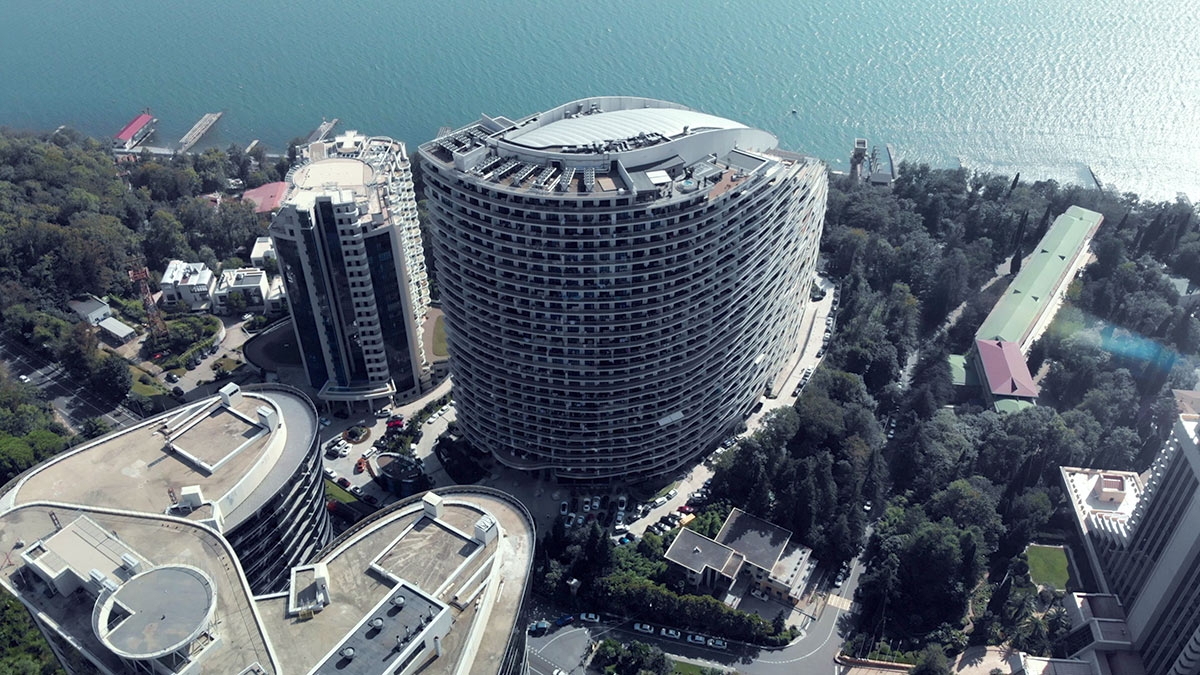 Credit: IStories The building in the Russian resort city of Sochi where Polyakova owns an apartment.

In addition to the apartments, IStories obtained a document showing that Polyakova’s family boasts a fleet of luxury cars. She and her mother own three high-end Mercedes-Benz vehicles worth a total of about 40 million rubles ($545,000), as well as a Porsche. Polyakova also owned a Bentley until 2016.

Polyakova’s daughter Polina, 26, studied at the Imperial College Business School in London. She owns a company in the British capital, PPK Investments Ltd, which is registered at a house in Kensington, one of the city’s most expensive districts. The company’s principal activity is buying and selling real estate.

In 2016, Polina leased an apartment in the same building for 999 years, a common form of indirect real estate ownership in the United Kingdom. She paid 4.4 million British pounds ($6.2 million) for the lease. At the time, she was just 21 years old.