Working as an illegal miner in Chocó, in northwest Colombia, comes with its perks.

Operating the dredgers used to carve out chunks of the riverbeds in search of gold is hard work. Often the crew live and sleep on the machines, which locals call “dragons.” But in a region where almost six in 10 people live in poverty, these miners don’t go hungry. Some dredgers even have their own cooks, said local miner Miguel.

“Everyone in the dredger has their hammock, they have their daily food, good food,” said Miguel, whose last name OCCRP has omitted for security reasons. “In the dredgers there are leftovers.”

Mining has been part of Chocó’s history since the Spanish conquistadors first brought African slaves to dig for gold in the 1600s. Today it is Colombia’s second-largest gold-producing state, excavating 4.8 tons of the precious metal in 2019, according to the United Nations Office on Drugs and Crime.

But when it comes to illegal mining, Chocó tops the table. A recent study by Global Financial Integrity, a Washington, D.C.,-based nonprofit that focuses on illicit financial flows, found that more than 27,500 hectares of alluvial land in Chocó was devoted to it, accounting for almost 43 percent of all illegal mining across Colombia in 2019. Of the 527 mining operations identified by the National Mining Registry in the region in 2011, when the last census was taken, more than 99 percent had no permit. 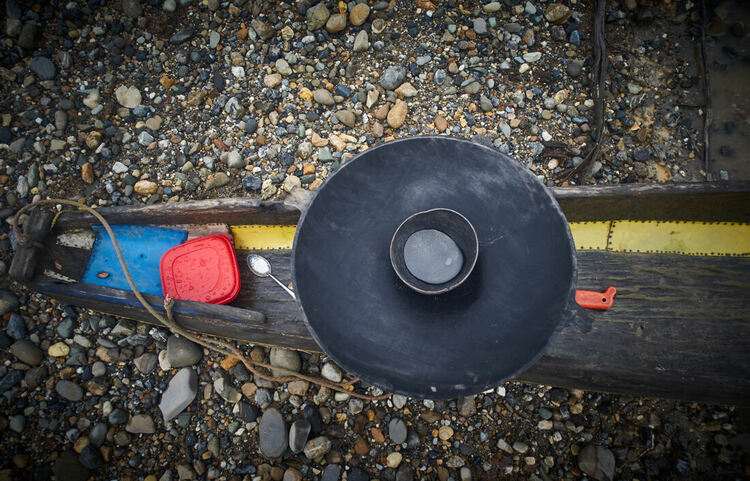 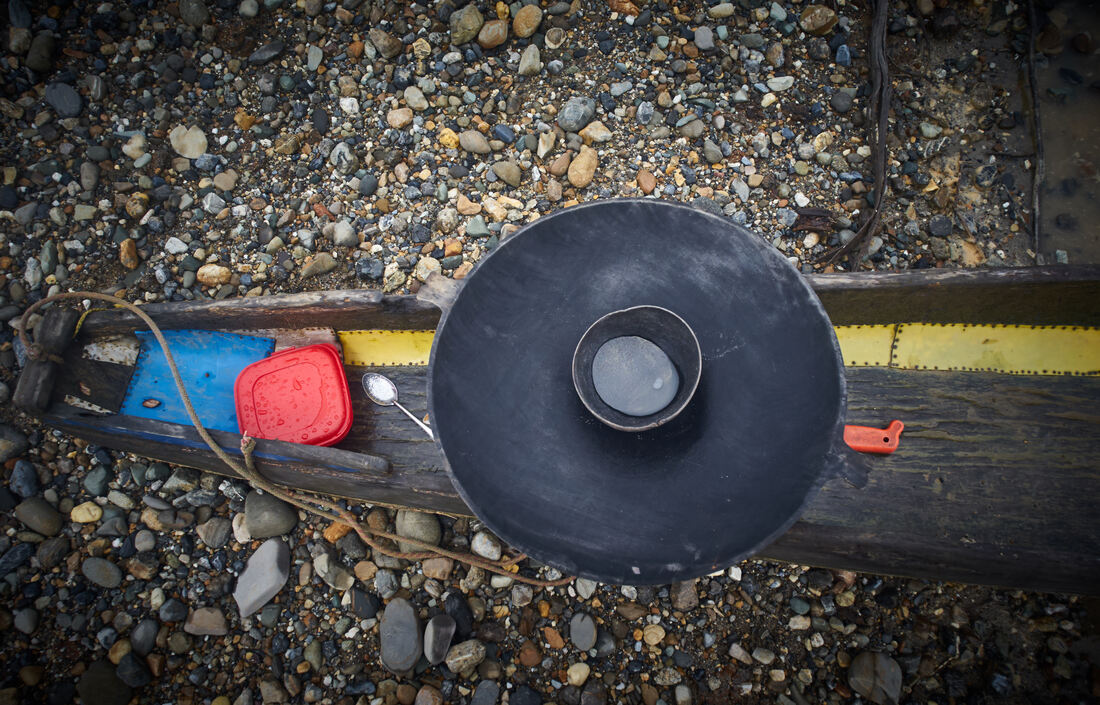 Credit: Gerald Bermúdez Traditional mining, known as “barequeo,” relies on a large plate-shaped pan to separate out the gold, rather than the heavy equipment used by illegal miners. 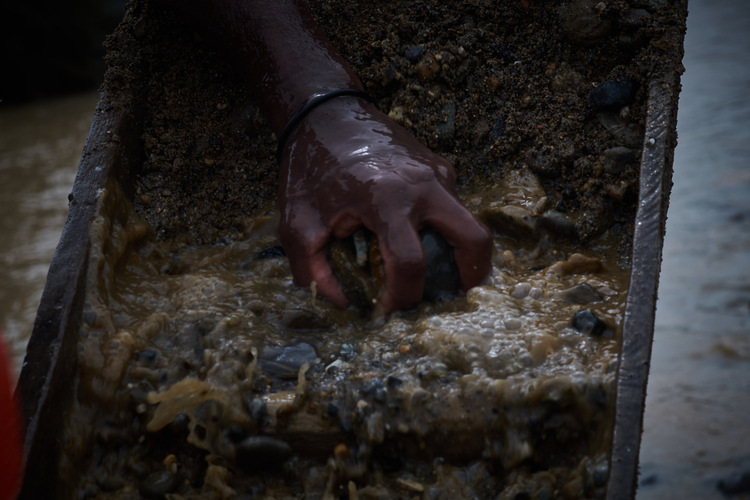 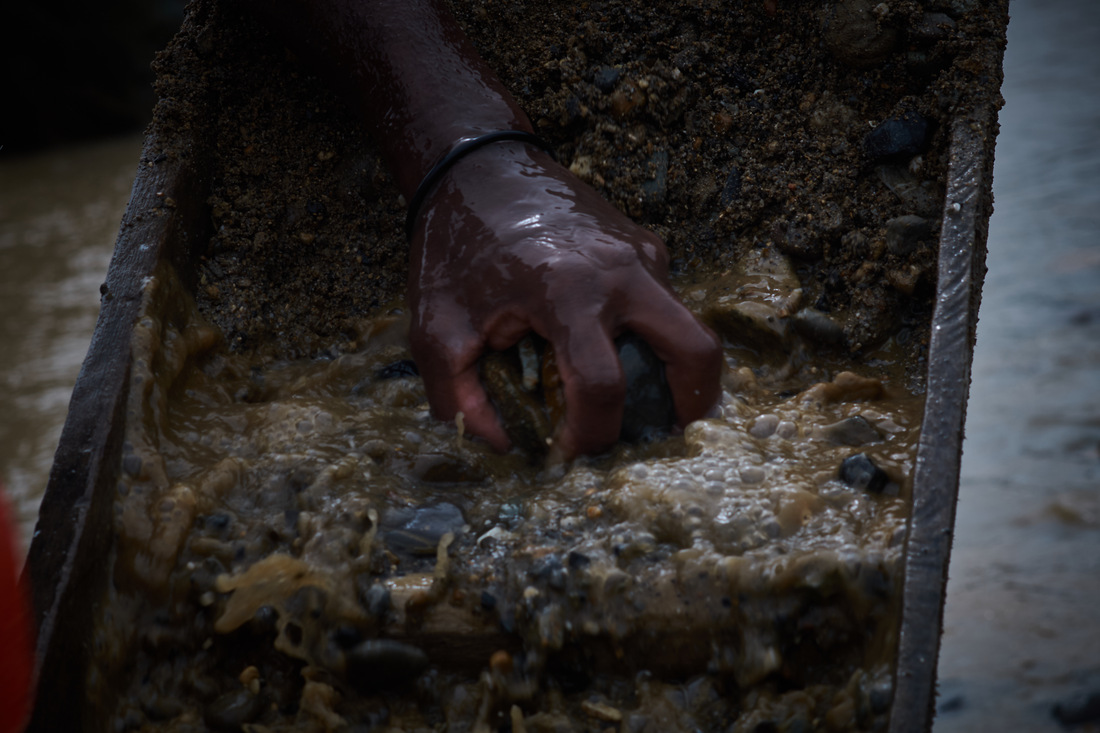 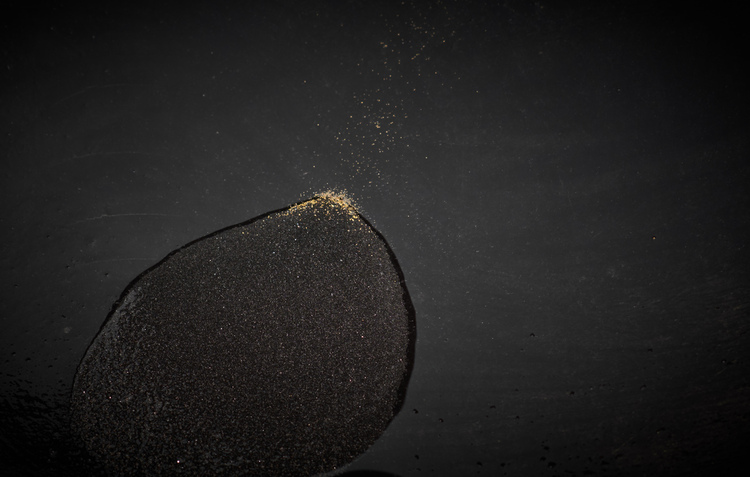 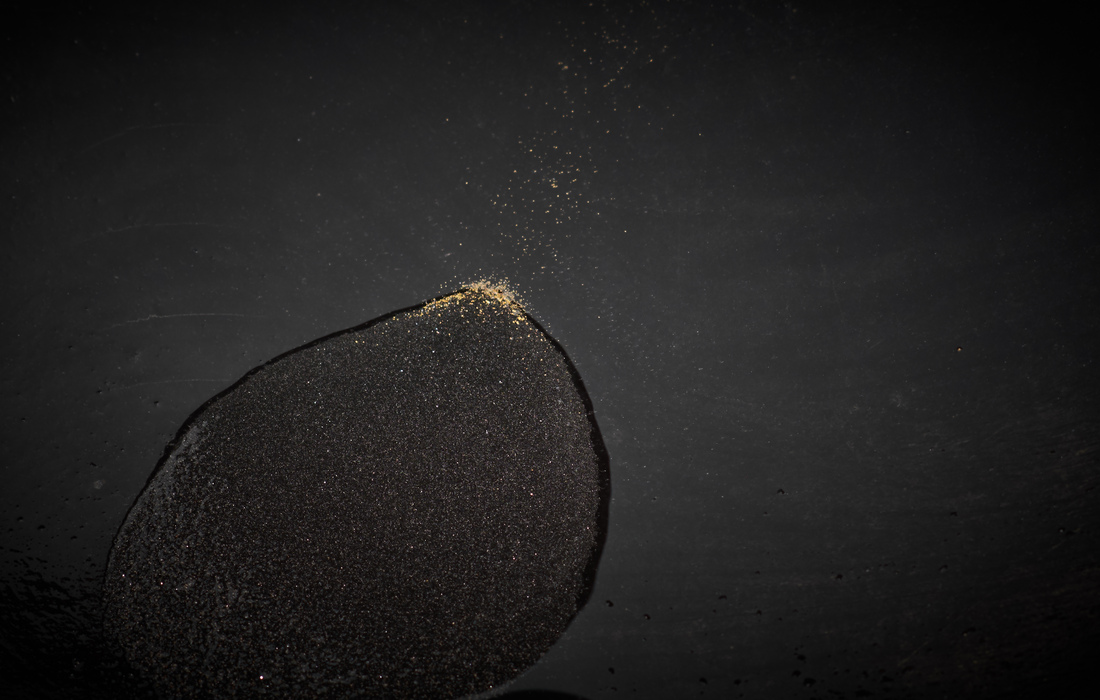 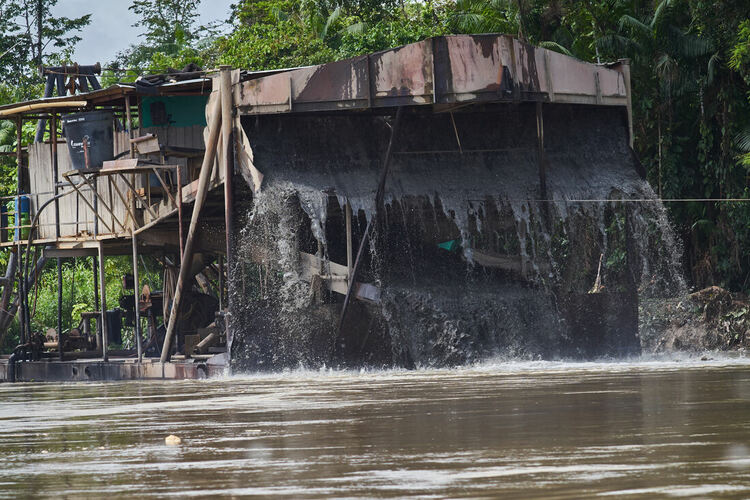 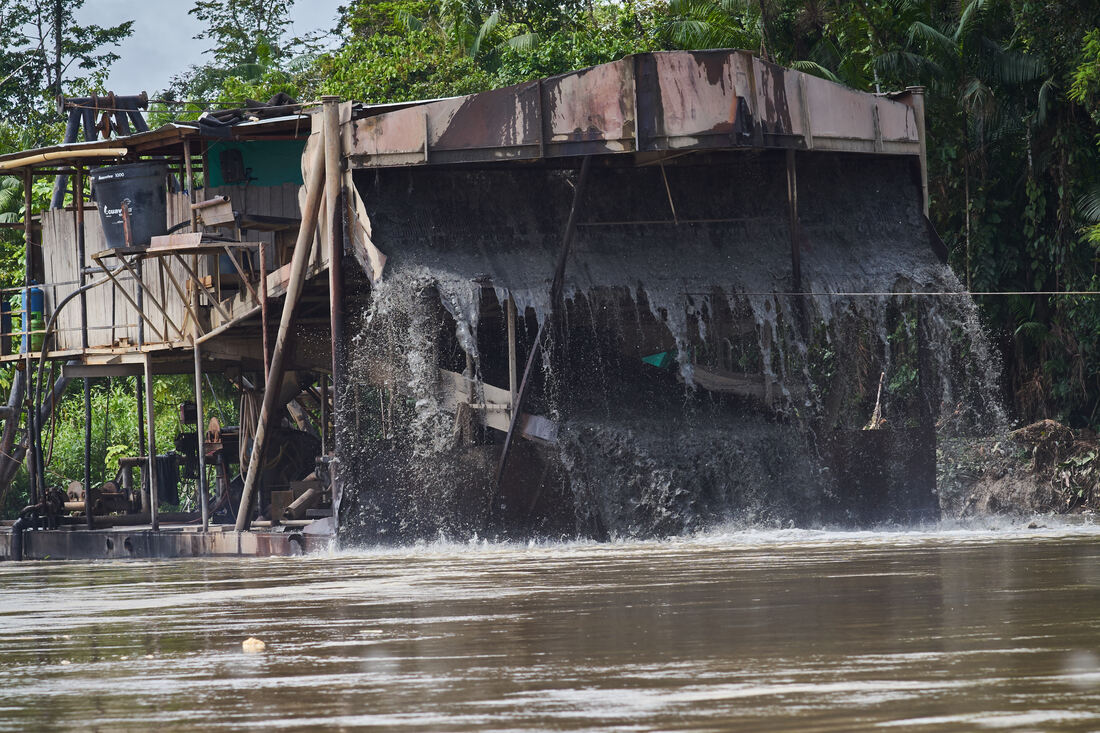 Credit: Gerald Bermúdez Illegal gold mining uses huge dredgers, known locally as “dragons,” to scoop out material from the riverbed, which is crushed and sieved to separate the gold particles from the rest of the minerals. Miners then add mercury to make the gold fall to the bottom of the mixture.

Little of the wealth from this mining boom has filtered through to local communities. The mayor of Río Quito municipality, Herlin Antonio Mosquera, said mining companies often declare their royalties and pay taxes in other areas, meaning Chocó doesn’t see much benefit from its own mineral wealth.

“They are exploiting us twice,” Mosquera said. “They leave the environmental problem, and the royalties are taken away.”

Instead, illegal mining has created its own illicit economy.

Miguel said dredger operators pay around eight percent of their income to paracos, the local slang term for paramilitary groups that prowl the area. Chocó’s riverways are home to these rightwing paramilitaries as well as leftwing guerrillas, both of which are partially financed by illegal mining.

Read more about one illegal mining operation in a new investigation by OCCRP and its partners in Colombia.

Reporters came face-to-face with several paracos on the Río Quito late in 2020. As they drifted down the river filming a dredger, they were intercepted by another wooden vessel carrying two men, one of them grinning menacingly, which forced them to bank on a mound of earth.

There, three men wearing rubber boots and black hats started questioning the group’s fixer, asking who they were and why they were there. After 15 minutes of interrogation, the men accepted the story that the journalists were aid workers and let them go. Locals later identified the men as paracos.

Besides the armed groups, Miguel said dredger operators give a further 12 percent of their income to landowners and 10 percent to the local community council, as well as making payments to law enforcement, who warn them of any raids. 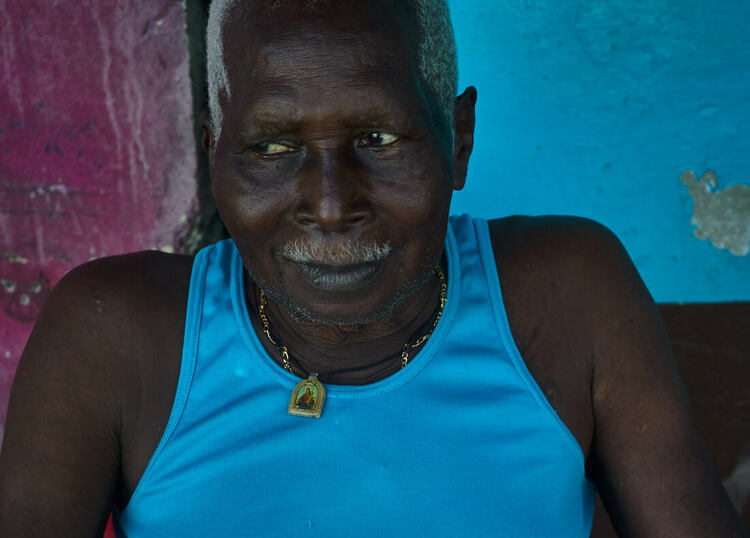 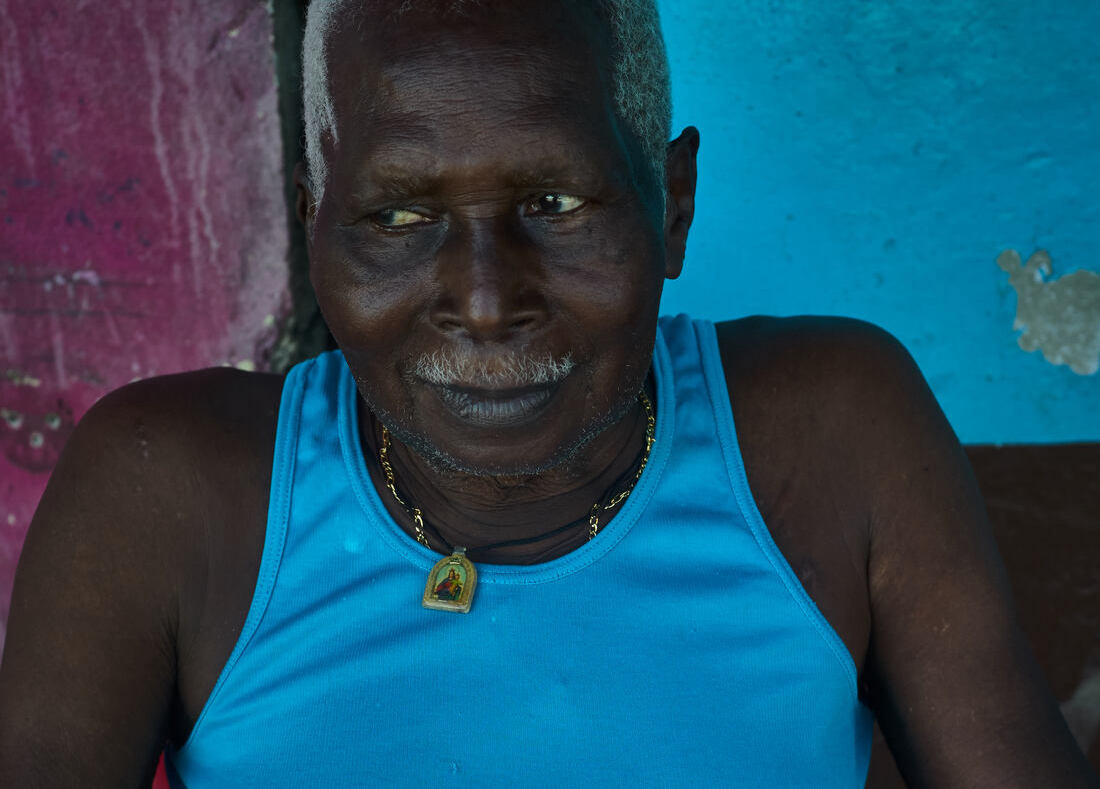 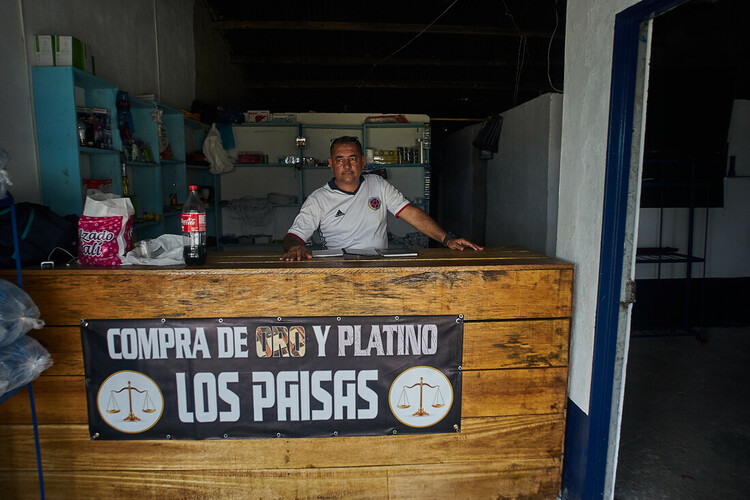 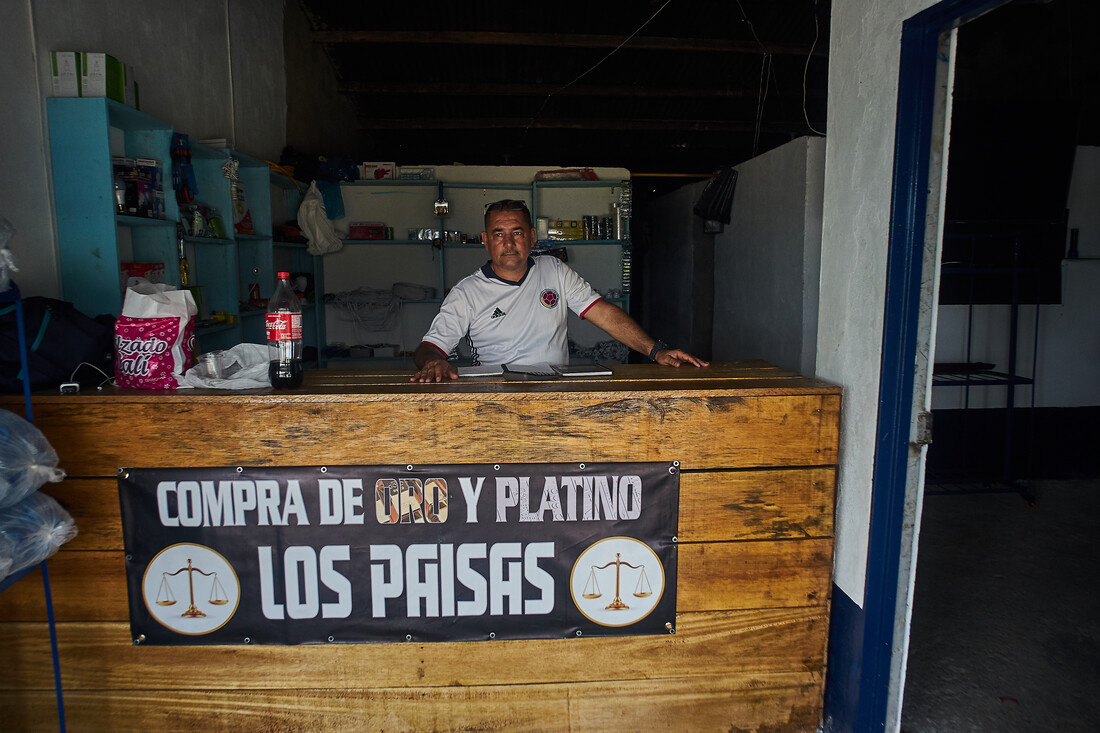 Credit: Gerald Bermúdez As legally and illegally mined metals are bought and sold they are mixed together, making it impossible to trace their origins. 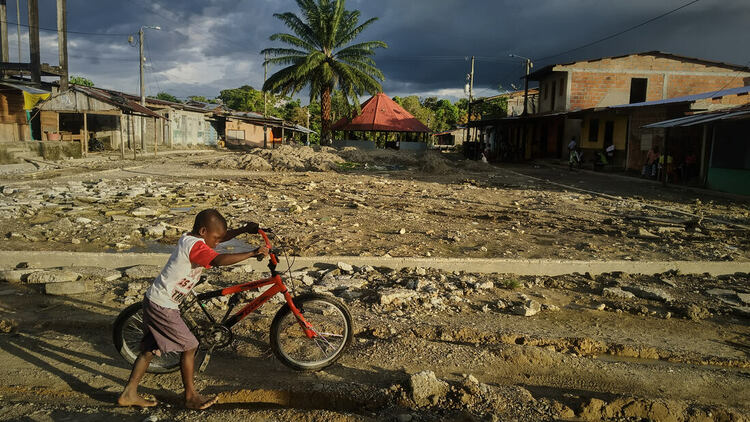 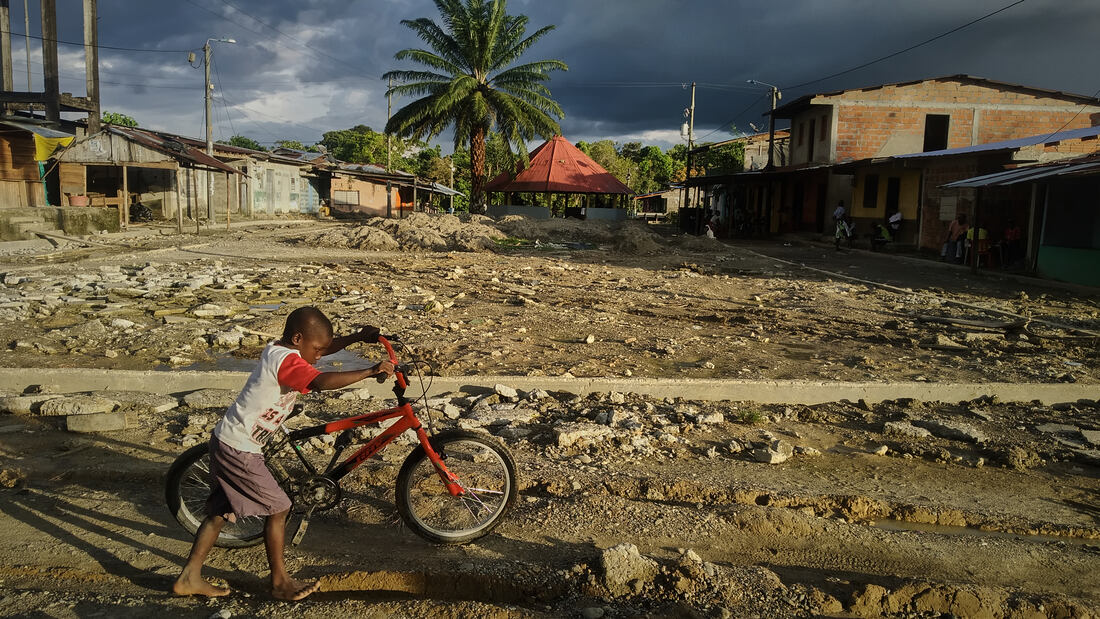 Credit: Gerald Bermúdez Nearly 80 percent of people in Chocó live in poverty, one of the reasons so many end up working in illegal mining. 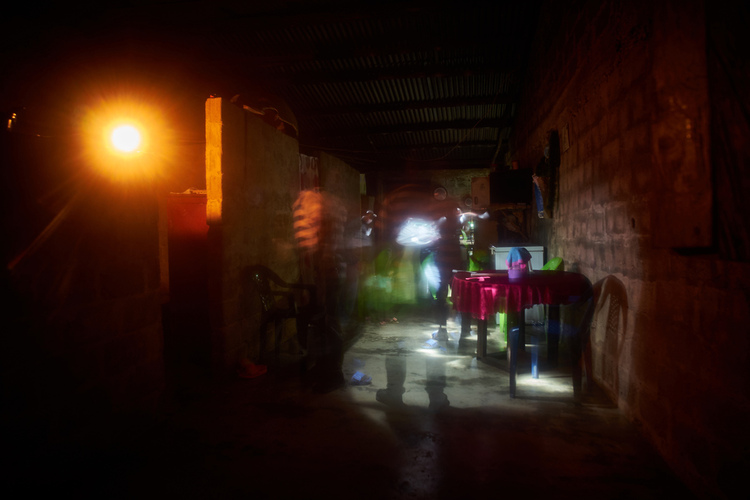 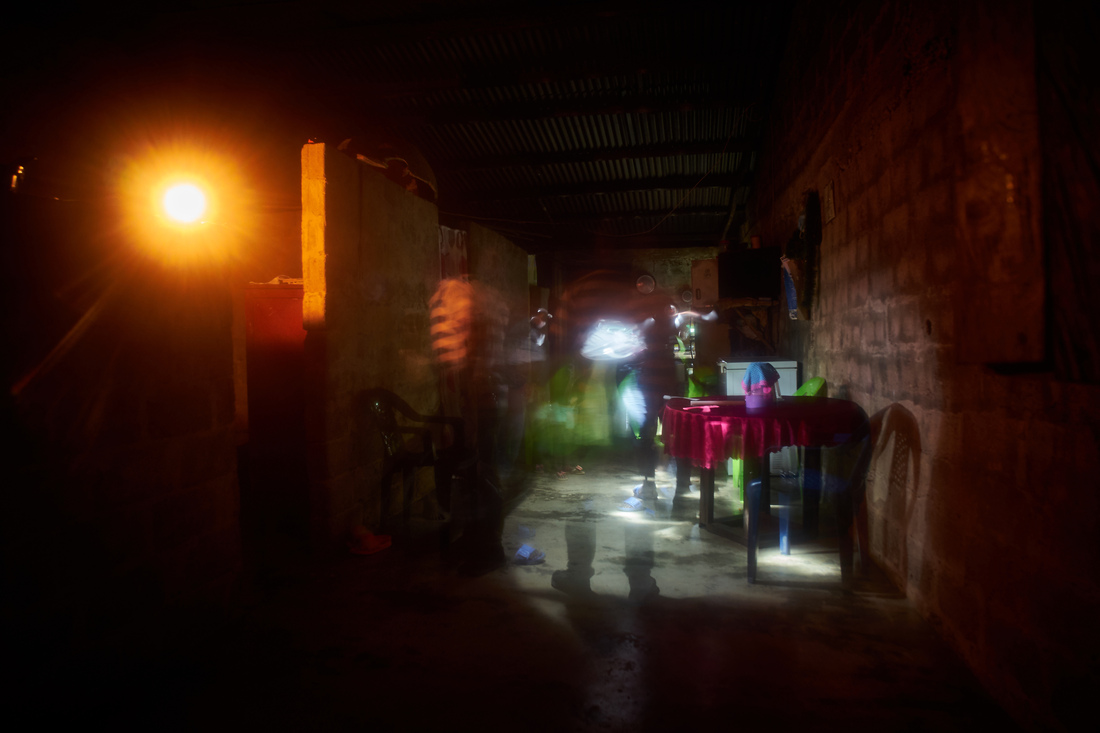 Gold is everywhere in Chocó. Shops selling the yellow metal line the main streets of Quibdó, the capital of Río Quito municipality, and the neighboring town of Istmina. Gold jewellery glints at people’s necks and ears.

But while some profit from the gold boom, all feel the impact of the mercury it pumps into the region’s rivers. Illegal miners use the element to extract gold from the river’s silt, making it faster and easier to collect.

Each one of the hundreds of illegal mining operations in Chocó dumps an estimated 36 kilograms of mercury into the rivers every year, poisoning their waterways and the people who depend on them.

A court case brought by local communities said 37 children and teenagers from indigenous and Afro-descendant communities died from drinking contaminated water in 2013 and 2014, and a further 64 were poisoned. One study by the Pacific Environmental Research Institute found people living in the Atrato River basin had 120 times the recommended level of mercury in their blood.

The mercury has also poisoned the fish that are a vital source of protein for local people. A WWF study identified five species in the area that had high levels of mercury in their muscles, which would be passed on to anyone who eats them.

Mauricio Cabrera, mining policy coordinator from World Wildlife Fund Colombia, said removing mercury from the Atrato River and its tributaries is incredibly difficult because it has mixed in with the silt of the riverbeds, slowing their currents.

“Promoting recovery … is very difficult and would require gigantic investments,” he said.

“Río Quito is one of the biggest environmental disasters in the country.” 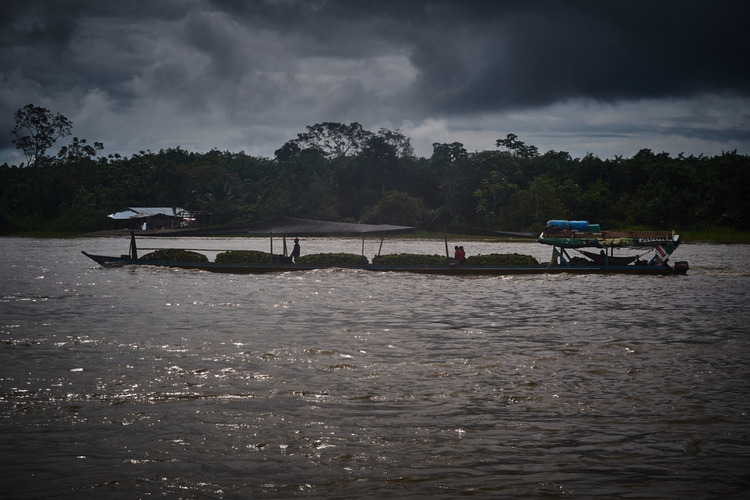 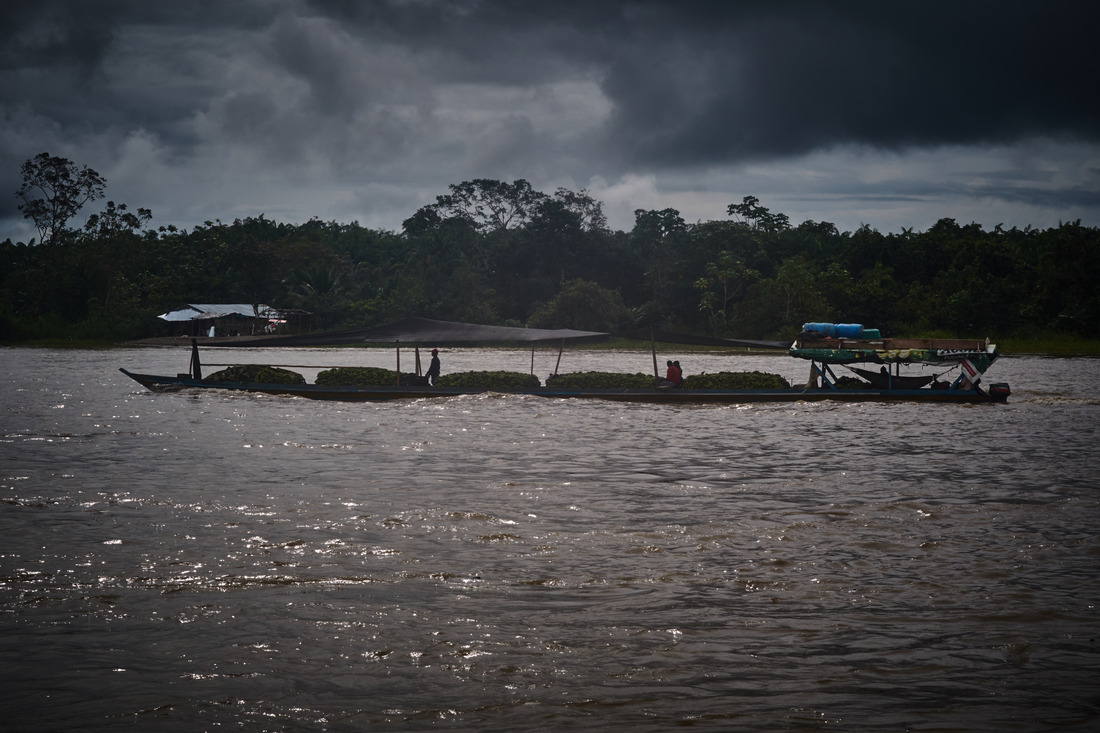 Credit: Gerald Bermúdez Farming is one of the few alternative jobs to illegal mining for people in Chocó, but it can be hard to turn a profit as transport costs are high in such a remote area. 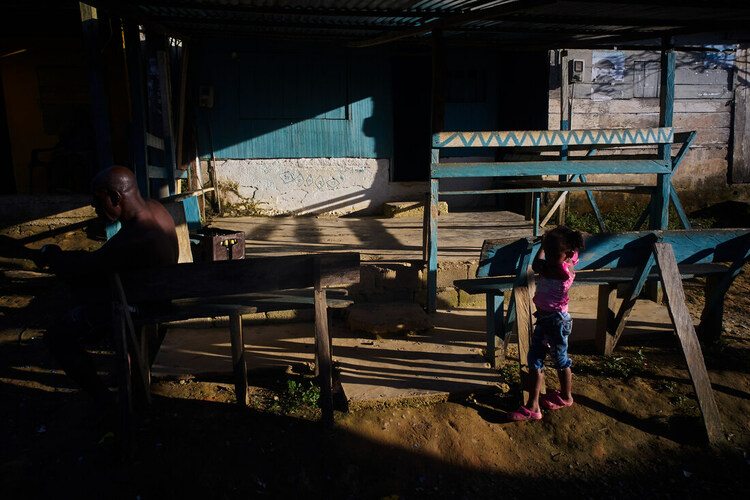 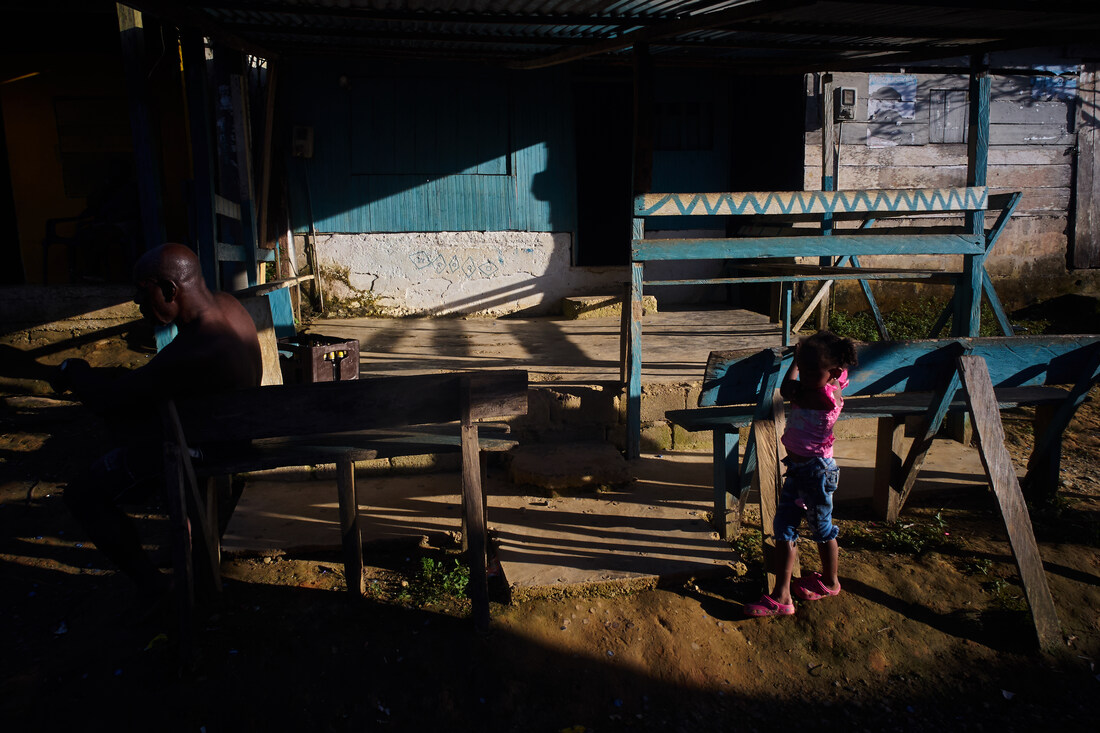 Credit: Gerald Bermúdez A man sits on a bench, watched by a young girl, in a town in Chocó. 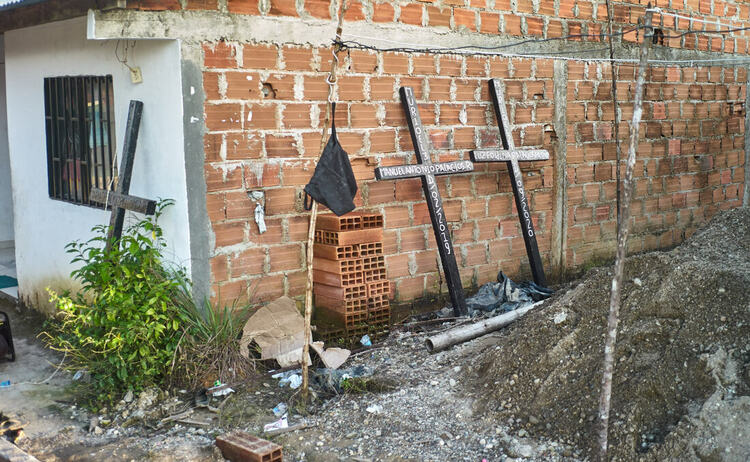 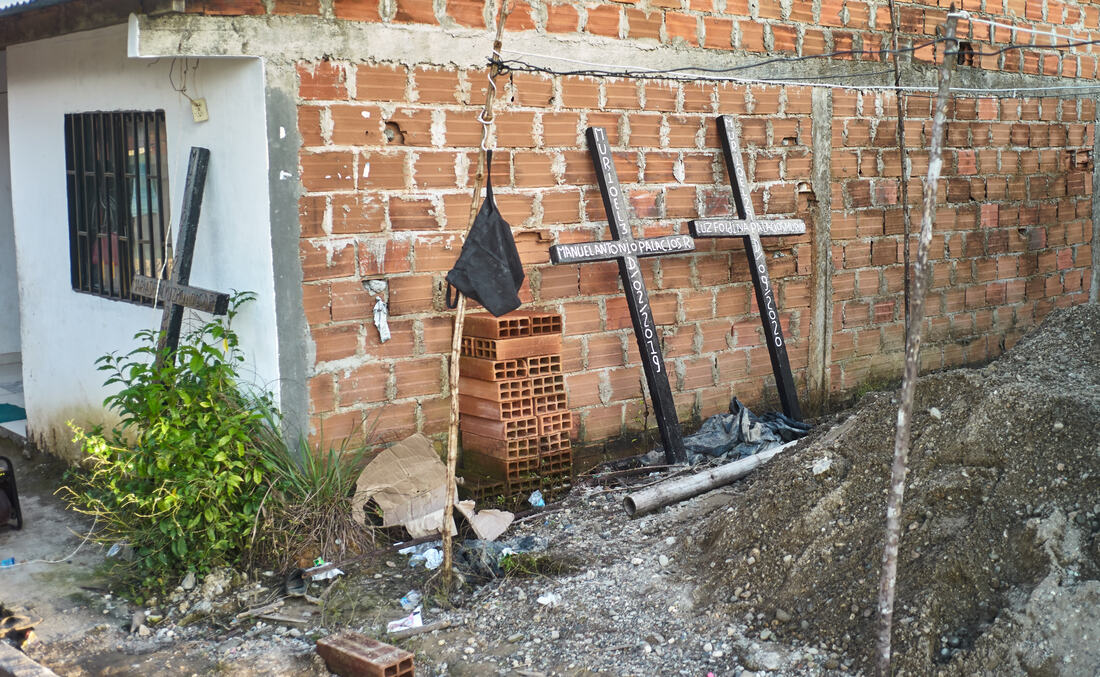 Credit: Gerald Bermúdez Two wooden crosses wait to be used in a cemetery in a town in Río Quito municipality.
Tweet this Share this on Facebook