The Art Deco-style mansion at 47 Paris Street in Bucharest was never going to be cheap. It measures over a thousand square meters, sits in a prime neighborhood favored by diplomats, and was built by legendary Romanian engineer Emil Prager in 1933.

But it still raised eyebrows among some in Romania’s capital when the white stone building shot up in value by a million euros in under a week in 2009.

Even more unusually, the mansion passed through the hands of a widowed pensioner who lived in a Communist-era public housing block in southwest Bucharest. Leana Pielmus, then 58, bought it on September 10 for 3.5 million euros (the equivalent of US$5 million). The average pension in Romania at the time was 162 euros per month. 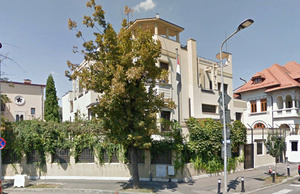 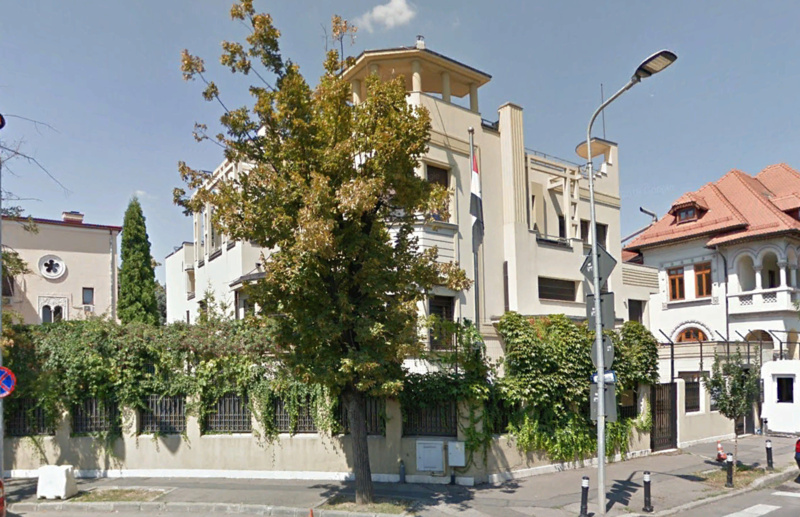 Credit: Google Maps The mansion on Paris Street in Bucharest.

Pielmus sold it a week later to the Syrian Foreign Ministry for 4.46 million euros (US$6.6 million), according to sales contracts obtained by journalists from OCCRP partners RISE Project and SIRAJ.

The deal, which has never been reported in the mainstream media, was brokered by her son-in-law, Ammar Aoun, a dentist who counts the Syrian ambassador to Romania among his friends.

“The person who bought and sold the property to the Syrian government is a relative of a close friend of the ambassador,” said Romania-based Syrian dissident Mohamad Rifai, also a dentist.

Read a version of this story in Arabic.

In the aftermath of Bashar al-Assad’s brutal suppression of anti-government protests in Damascus in March 2011, the European Union imposed sanctions on the Syrian strongman and his close associates, which are still in place. Romania is one of a few EU countries that have nevertheless maintained diplomatic relations with the Syrian regime throughout the subsequent civil war.

Dissidents like Rifai argue that Bucharest has become a European hub for the illicit financial networks of Assad and his wealthy cousin, Rami Makhlouf, who is married to the daughter of the Syrian ambassador.

That ambassador, Walid Othman, is among Assad’s closest associates. He has been at his diplomatic post in Romania for 13 years, despite having blown past the mandatory retirement age of 65. In 2012, Reuters quoted a former Syrian oil minister as saying that Othman was “one of the people making dealings on behalf of the Assad family,” although he could not provide concrete proof for the claim.

The dentist who brokered the embassy deal, Ammar Aoun, told OCCRP member center RISE Project that he was responsible for the purchase made by his pensioner mother-in-law — as well as the building’s immediate sale to the Syrian Embassy at a nearly 30-percent markup.

“I did everything,” he said. “Why is a Romanian citizen questioning what is happening in the Syrian Embassy?”

The dentist declined to comment on his million-dollar profit and did not say why his mother-in-law was on the paperwork. But he admitted that he had received much more than that from the Syrian Embassy over the years.

Hours after the interview, Aoun texted the reporter again.

“Good evening, I am sorry for the tone of the discussion we had today. I consider the subject old, legal and closed. Good luck in your effort to shed light on this matter.”

Ambassador Othman and the Syrian Foreign Ministry declined to say whether the deal followed public procurement rules or if the Syrian government investigated the potential conflict of interest.

Romania’s Ministry of Foreign Affairs said the question of how the Syrian Embassy was purchased was outside its purview. But Camelia Bogdan, a Romanian judge with expertise in money laundering, said the transaction raised red flags that should have been reported to authorities.

“There are obviously red flags of money laundering through [the] real estate system (e.g., lack of any financial justification, payments through a proxy who could not justify the legal origins of the funds) that should have been addressed by the notary who legalized the fraudulent scheme through an enhanced due diligence in accordance with AML obligations,” she wrote to reporters.

“In this case, the notary had the duty to identify the beneficial owner and submit a suspicious transaction report to the FIU (Financial Intelligence Unit).” 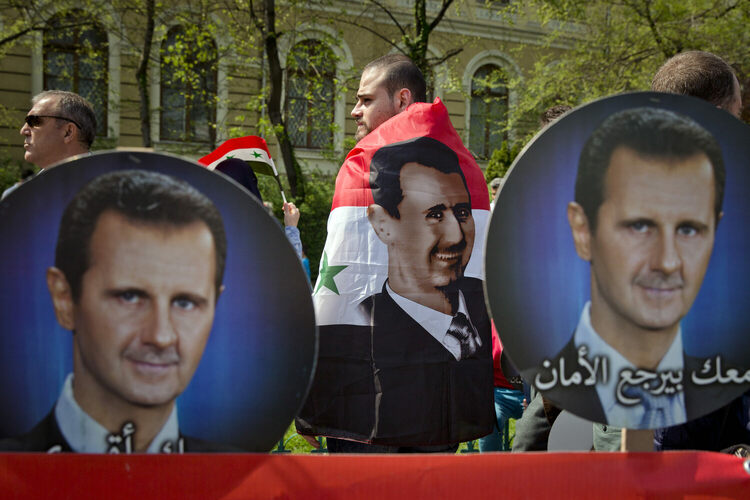 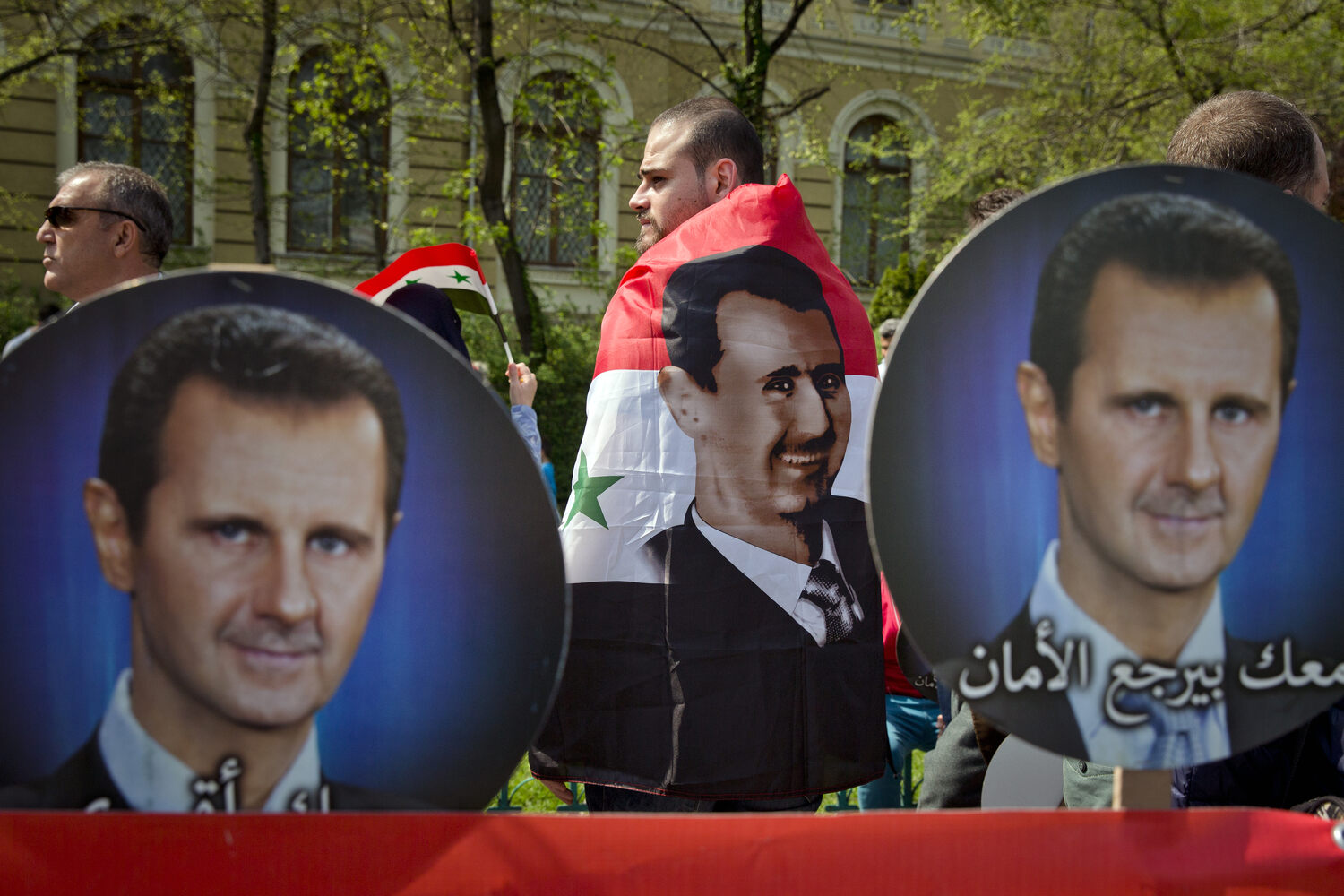 Credit: Vadim Ghirda/AP A demonstration by pro-Assad Syrians in Bucharest in 2016. The protesters are bearing photos that read: "With you, our safety will return."

The Dentist and the Diaspora

Romania and Syria have had close diplomatic ties since the regime of Nicolae Ceaușescu. The former communist dictator had a warm relationship with Assad’s father, Hafez al-Assad, who ruled Syria with an iron grip for nearly three decades.

The Syrian army relied partially on Romanian weapons to equip its soldiers. Damascus was also a major importer of livestock, timber, and other commodities from Romania before the EU imposed sanctions on Syria in 2011.

Hundreds of Syrians arrived in Romania in the 1980s, when Ceaușescu gave out scholarships to students from the socialist state. Many stayed behind, working as doctors and engineers or setting up businesses.

Ammar Aoun was among them. He studied dentistry in Bucharest and married a Romanian woman with whom he now runs a dental clinic.

“Those who came before 1990 were mostly students in medicine, dentistry, or studied at the polytechnic,” said an NGO worker in Bucharest who spent years assisting Syrian and other immigrant communities. She spoke on condition of anonymity because her workplace forbids employees from speaking to the press. 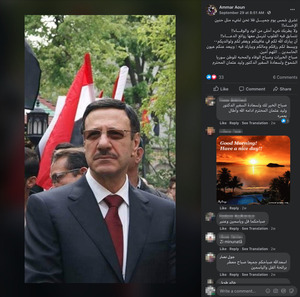 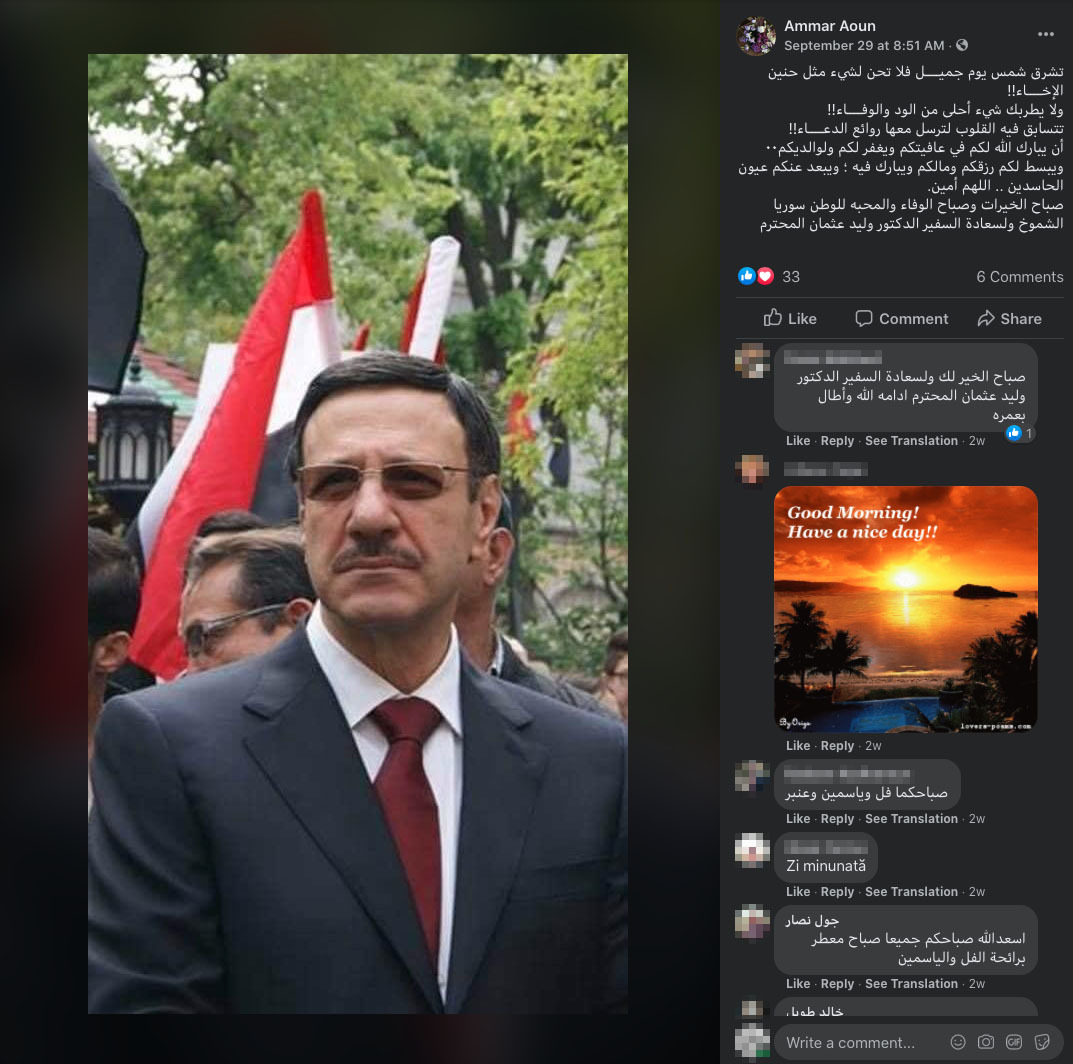 All that changed in 2011, when the 5,000-strong Syrian-Romanian community was riven by the outbreak of civil war.

“Overnight, some Syrians became enemies of the regime,” the aid worker said.

Others, like Aoun, doubled down on their support for Assad’s government, joining with another businessman to donate an SUV to the embassy. His Facebook profile is full of quotes supporting the Assad regime — and his friend the ambassador.

“The sun of a beautiful day rises … and nothing makes you happier than love and loyalty!!” he wrote in one typical post in late September. “A good morning full of loyalty and love to Syria, a country of Glory, and His Excellency Dr. Walid Othman.”

A month after Aoun brokered the embassy deal, he became embroiled in a money laundering case involving another Syrian-Romanian businessman, Yakhni Abdulkader.

The affair began when Abdulkader’s wife set off to Turkey with $769,000 tucked away in her travel bag, according to court documents.

Abdulkader called Aoun and asked for help evading customs officers at Bucharest Airport. Aoun told Abdulkader he would check whether “the person he knows is there,” according to prosecution documents.

But the money was confiscated, and Abdulkader was tried and convicted for organized crime and money laundering. Prosecutors accused him of using his wife, among other couriers, to launder money for a criminal ring that operated in Syria, Jordan, Iraq, Turkey, Saudi Arabia, and Lebanon. Abdulkader laundered up to $3.5 million between September 2009 and January 2010, according to court records.

Aoun was called as a witness in the case, but has insisted that his only role was recommending that Abdulkader contact a lawyer.

Aoun is also Facebook friends with Haytham A. Asaad, a Syrian-Romanian businessman who holds shares in a company that bought land inside a Romanian military base used by NATO soldiers in a deal exposed by OCCRP and RISE Project in 2018. Ambassador Othman’s son was that company’s main shareholder.

“Bone of the Regime’s Neck”

Othman was born in 1953 in a mountainous village overlooking the coastal town of Latakia, the seat of the ruling Assad family.

And like the Assads, Othman is part of the powerful Alawite minority, which has dominated Syrian politics since Hafez al-Assad seized power in 1971.

He began his career as a member of Syria’s ruling Baath Party, tasked with recruiting young people to join. In the 1990s he served as governor of the city of Dara’a, on Syria’s southern border with Jordan. His daughter, Razan, married Rami Makhlouf, the cousin of Bashar Al-Assad, cementing the links between the two families.

Makhlouf, a businessman who controlled more than 60 percent of the Syrian economy before the war broke out in 2011, is sanctioned by the European Union and the United States for his role in government corruption and bankrolling the Assad regime. Razan Othman is also under sanctions, although her father is not.

In 2007, Assad named Othman Syria’s ambassador to Romania. In turn, Othman has remained the president’s staunch supporter, even siding with him when he fell out with Makhlouf earlier this year.

“Walid Othman is among a group of ambassadors who are very close to the ruling family,” said Saker Elmelhem, a former Syrian ambassador to Chile who quit in 2013 in protest of what he saw as increasing sectarianism and corruption within the Foreign Ministry.

Elmelhem and another senior ex-diplomat, who asked to remain anonymous for safety reasons, both described Othman and a handful of other envoys in Assad’s inner circle as “the bone of the regime’s neck.”

“This group operates above Syrian laws and regulations,” said Elmelhem. “Their terms get extended and they can sell and buy all of Syria.”

“Even President Assad does not dare come close to them,” Elmelhem said. “This context helps explain the purchase of the embassy, and how Othman has maintained his post over the years in Romania.” 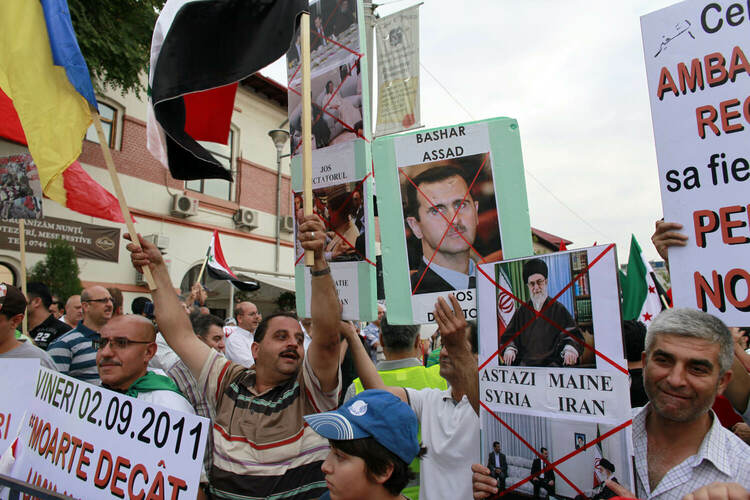 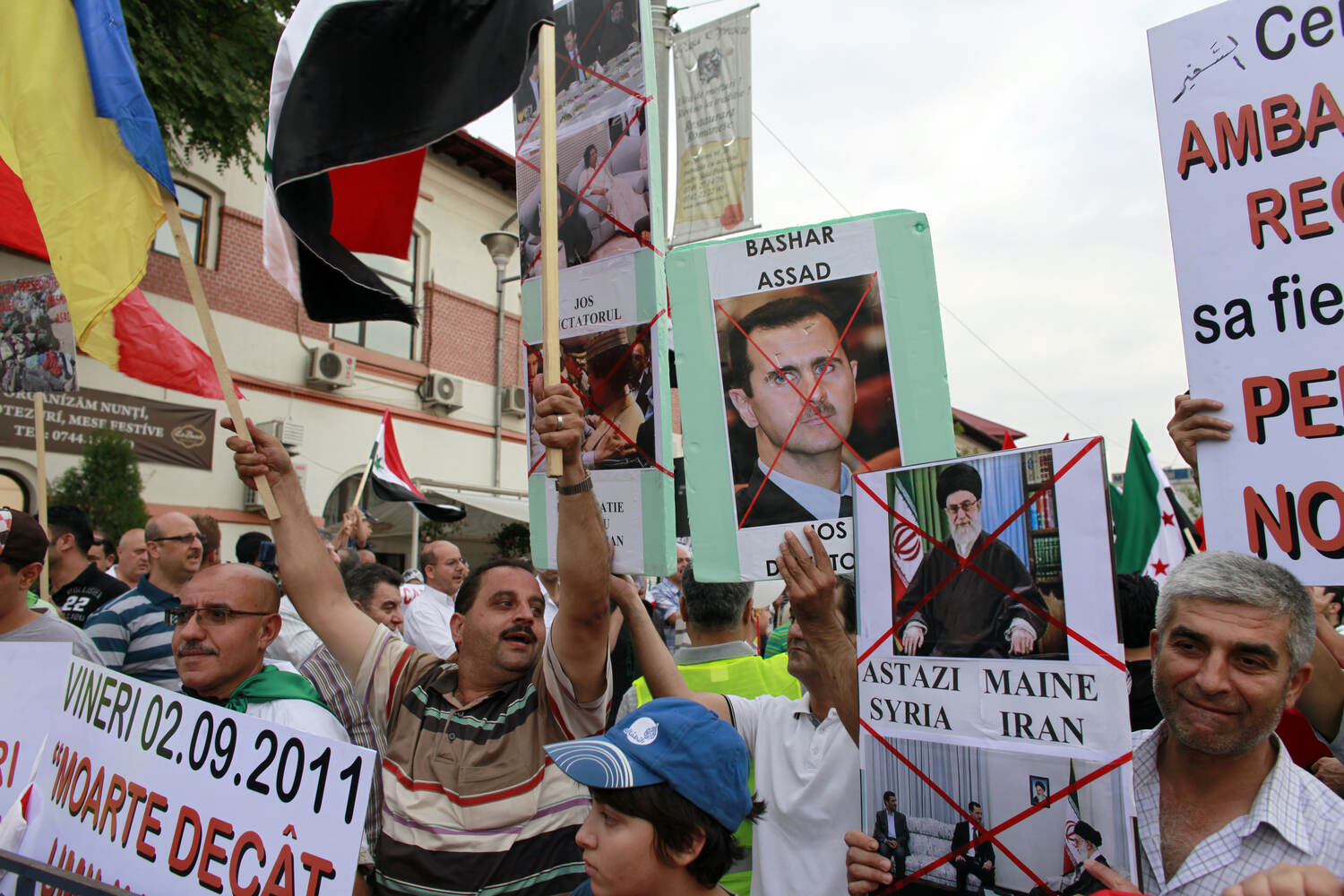 Credit: Radu Sigheti/Reuters A 2011 demonstration in Bucharest by Syrians opposing the regime of President Bashar al-Assad.

Under Syrian law, Othman should have retired two years ago, when he hit 65. But Assad has renewed his posting nonetheless, perhaps because nominating a new envoy might stir up trouble for Romania, which would have to approve the appointment and thus actively confirm its accord with Syria.

While many European states expelled Syria’s ambassadors after the Assad regime’s violent crackdown on anti-government protesters in 2011, Romania did not. Instead, both countries have increased security around the embassy at 47 Paris Street, which has become the site of regular protests by local Syrians who oppose Assad.

Dr. Rifai, the dissident, said the embassy building felt to him like a symbol of corruption and wasta — the Arabic word for insider connections.

“We Syrians who belong to humanity … feel it is an embassy that does not provide us with any form of protection,” he said.