The family of Vladimir Zhirinovsky, a controversial elder statesman of Russian politics and leader of the Liberal Democratic Party of Russia (LDPR), owns undeclared property worth an estimated US$135 million.

Russian politicians are obliged to annually declare properties and income that belong to them, their spouses, and their children. Though Zhirinovsky has been a member of parliament since 1993, and his son Igor since 1999, the assets revealed in this investigation do not technically fall under this requirement because they are registered to women who are not officially married to the two men.

But the combined value and elite status of the properties — including a villa in a seaside Spanish resort, a hotel in Ibiza, and multiple apartments in Moscow — point to family assets that greatly exceed Zhirinovsky’s declarations.

Zhirinovsky and his son have spent most of their careers in politics, a professional life that pays little and does not explain by any legal manner their families’ immense wealth.

Zhirinovsky’s press secretary did not respond to requests for comment. The two women who hold the properties could not be reached.

Vladimir Zhirinovsky entered the political arena in 1989, co-founding the Liberal-Democratic Party of the Soviet Union. In 1993, having renamed itself to reflect the Soviet Union’s dissolution, the LDPR took first place in Russia’s first independent parliamentary elections. Since then, it has occupied a stable third or fourth place in elections at various levels. It’s currently the third-largest party in the State Duma, Russia’s lower house of parliament, and also has three acting governorships.

The LDPR, and Zhirinovsky himself, cultivate an image of political opposition. The party’s rhetoric is strongly nationalist and its criticism of official policy often adopts a right-wing position. But that criticism is often purely symbolic. In most cases the party ends up supporting the Kremlin’s legislative priorities. In Russia, the phrase “loyal” or “systemic” opposition is often used to describe such parties, which give the appearance of a functioning democracy but in fact serve as place-holders for genuine opposition movements.

The LDPR strikes a personalized tone in large part due to the character of its leader, who is well-known for his provocative and eccentric behavior. Zhirinovsky has poured juice on politician Boris Nemtsov during a debate, cursed at presidential candidate Ksenia Sobchak in a live broadcast, and on one occasion even ordered a security guard to rape a pregnant journalist.

The party turned into a family affair long ago. For three sessions, Zhirinovsky’s son Igor Lebedev (who uses his mother’s last name) led the LDPR’s fraction in parliament. And for the past two sessions, he has held the post of Deputy Chairman of the State Duma.

Both Zhirinovsky and Lebedev were sanctioned by the European Union after Russia’s invasion of Ukraine in 2014.

The most recent declared incomes of both father and son reveal considerable assets.

In 2017, Zhirinovsky declared that he owns two plots of land, measuring 26,000 square meters with eight houses and other structures, such as garages, outbuildings, a carport, and a pool.

The two plots are in Daryino, about 25 kilometers west of Moscow. Reporters have estimated the value of the land alone at about $2.7 million. The value of the buildings is unknown. These plots will not appear in his next declaration: In early 2019, Zhirinovsky transferred them to another son, Oleg Eidelshtein.

In 2017, Zhirinovsky’s son Igor Lebedev declared ownership of two non-residential properties and an apartment. One of the properties, which currently hosts a hostel and is located directly across from the Kremlin on Volkhonka street, is worth about $7.2 million. Lebedev’s apartment, also in Moscow on Nezhinskaya street, is valued at $4.5 million.

But these declared assets are far from all the properties owned by the Zhirinovsky family.

According to his son Igor Lebedev’s press secretary, Anna Krylova, Zhirinovsky was formally divorced from Lebedev’s mother, Galina Lebedeva, in 1976.

The couple has since reunited. They were married in a church ceremony in 1996, have appeared at various events together, and Zhirinovsky did declare his wife and some of her properties between 1999 and 2011. Asked why he stopped doing so in 2012, he said his “church marriage” did not require official declarations.

The EU sanctions on Zhirinovsky don’t cover friends and relatives, so Lebedeva can freely travel to Spain, where, according to property and land records obtained by reporters, she owns an apartment in the seaside resort town of Benidorm, three offices in Barcelona, and a villa with a pool and a picturesque view of the Mediterranean in Altea. The value of this foreign property is estimated to be close to $5 million. 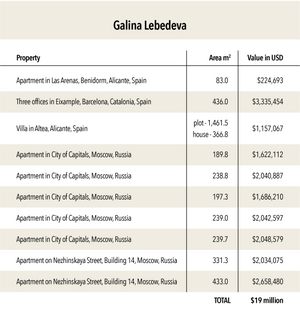 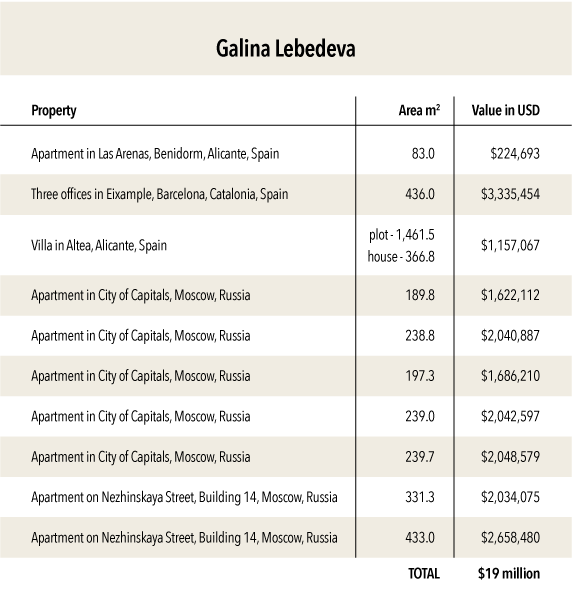 Lebedeva’s Moscow property is worth even more — to the tune of $14 million. According to company and property records, she owns five apartments in the luxurious Moscow City business center, as well as two apartments on Nezhinskaya Street, next to her son.

Lebedeva owns several Russian companies that, according to public data, mostly deal in real estate management. The only project any of the companies are known to have undertaken is Barcelona Park, a high-rise building in the resort town of Sochi which was commissioned in 2016.

Lebedeva’s company may have earned as much as $13 million on the project, an estimate based on government statistics on construction costs and real estate prices.

None of Lebedev’s recent declarations mention a spouse. But according to an LDPR staffer who would only speak on condition of anonymity, Zhirinovsky’s son has a common-law wife named Nadezhda Grishaeva. There’s more evidence to back this up. In May 2017, a woman who calls herself Nadezhda Grishaeva’s mother on social media published her daughter’s photo in front of a collage of photos of Zhirinovsky, which, according to geolocation data, was taken at the Moscow Manege exhibition hall. In the caption, she wrote that Nadezhda had attended Zhirinovsky’s 70th birthday celebration at the iconic Moscow building, describing the politician as her daughter’s “father-in-law.”

According to leaked government vehicle registration data, cars now registered to Nadezhda Grishaeva were previously registered to Igor Lebedev and a friend, Alexander Mishin. Grishaeva and Lebedeva were also co-owners of several firms in Russia and in Spain.

Igor Lebedev’s press secretary has not denied that Lebedev and Grishaeva are close.

“Grishaeva is not registered as being married to Lebedev, so she is not mentioned in [his] declaration on strictly legal grounds,” she wrote.

Grishaeva owns apartments in Benidorm, Spain, as well as the Azuline Hotel-Apartamento Rosamar building in Ibiza, the value of which is estimated at $39 million.

She also owns properties through Telmi, a Russian company that used to belong to her husband. The firm holds more than a dozen apartments on Nezhinskaya Street (where two of his mother’s apartments are located). The value of the properties, almost all of which were acquired in 2010, while Lebedev still owned the company, exceeds $32 million. 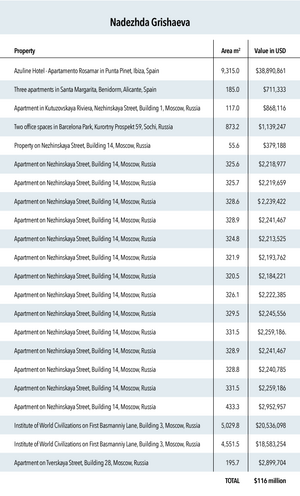 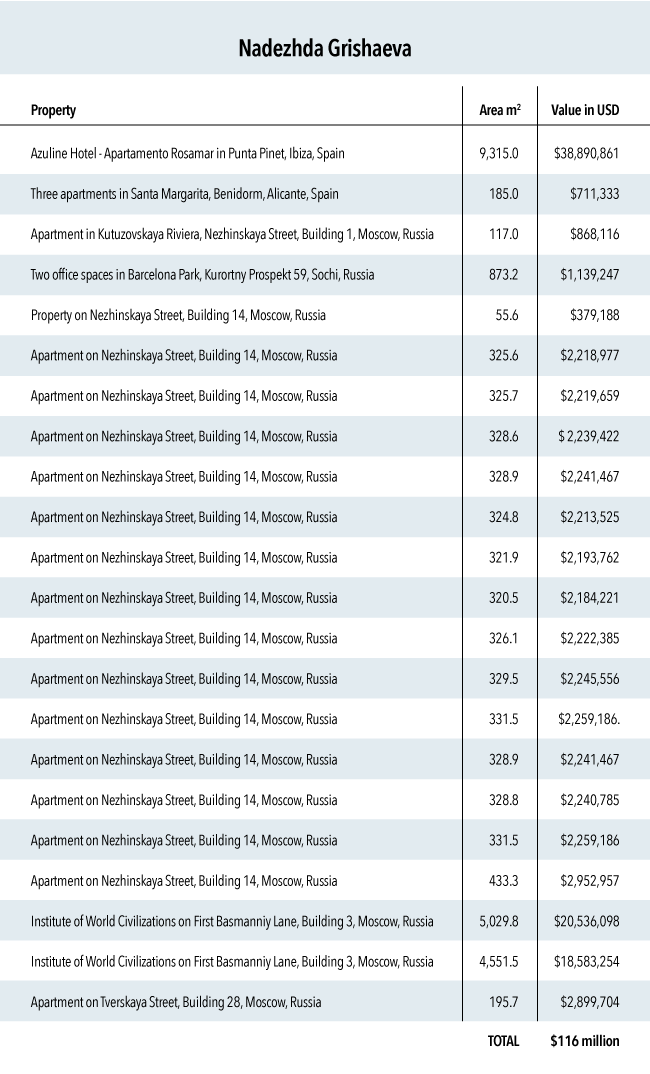 In 2014, Telmi’s ownership was transferred to a Cyprus company called Hague Holdings — which is split between Lebedev’s wife, Grishaeva, and Yuri Chaplygin, who according to two acquaintances is a friend of Lebedev.

Telmi also owns a majority stake in two buildings on Pervyi Basmanny Lane, where the Institute of World Civilizations, a non-profit established by the LDPR and Zhirinovsky, is located. Zhirinovsky’s wife Lebedeva owns the other 10 percent of the buildings, which are estimated to be worth about $40 million.

According to Igor Lebedev’s press secretary, Nadezhda Grishaeva’s real estate was purchased with her own money, which she earned as a professional basketball player.

“Grishaeva is a member of the Russian Olympic Team and a participant in the London Olympics. She played professional sports for 15 years for Russian, Turkish, and French basketball clubs, in addition to having advertising contracts. In the course of 15 years, a professional athlete is able to make the money necessary for the purchase of said property,” she said.

However, a basketball agent who spoke with reporters, Sergey Tarakanov, said that athletes of Grishaeva’s level could typically earn “a few million rubles per season, but definitely not millions of dollars.” At today’s exchange rate, one million rubles is equal to about $15,000.

Parties in the Russian parliament receive federal money for every vote they get, which brings the LDPR about $15 million each year.

According to several members of parliament and officials from the presidential administration who would only speak anonymously, a separate major source of income for the party comes in the form of donations from candidates who pay for inclusion on the party’s list for State Duma elections.

The amount of these donations, the sources say, is determined by agreement and depends on the candidate’s reputation, popularity, and experience (the inexperienced pay more). The amounts range from $1.5 million to $7.5 million. In some cases the donations go not to the LDPR itself but to institutions closely associated with the party, such as the Russian Union of Free Youths, the Center for the Support of Youth Initiatives, and the Fund for the Support of Unemployed Youth.

Since 2010, these organizations have been headed by LDPR deputy Vadim Dengin (and two were previously led by Galina Lebedeva). Between 2013 and 2017, they received voluntary donations and contributions totalling $170 million, according to publicly available data.

One of the privileges of serving as a legislator in the State Duma is legal immunity, which could explain the high cost of the seats. Among LDPR legislators are many for whom such a designation could prove useful.

For example, Mikhail Glushchenko, a former LDPR deputy who is widely considered a leader of the Tambov organized crime group, was sentenced to 13 years in prison in 2015 for organizing a murder.

His colleague from the same session, Vyacheslav Shevchenko, was wanted for extortion and was killed in Cyprus by unknown parties.

Ashot Egiazaryan, another former member of parliament with LDPR, was sentenced in absentia to seven years in prison for fraud in 2018 and is now hiding in the United States. A current legislator, Andrei Lugovoi, was accused of murdering former FSB officer Alexander Litvinenko by a British investigation.

Otari Arshba, the head of the Duma commission for monitoring the accuracy of information about the incomes of deputies, did not respond to a request for comment.