Artūras Skardžius, a member of the Lithuanian parliament who is deeply involved in energy issues, is under investigation for a windfall his family received from renting land to a company that subleased parts of it to a wind farm. 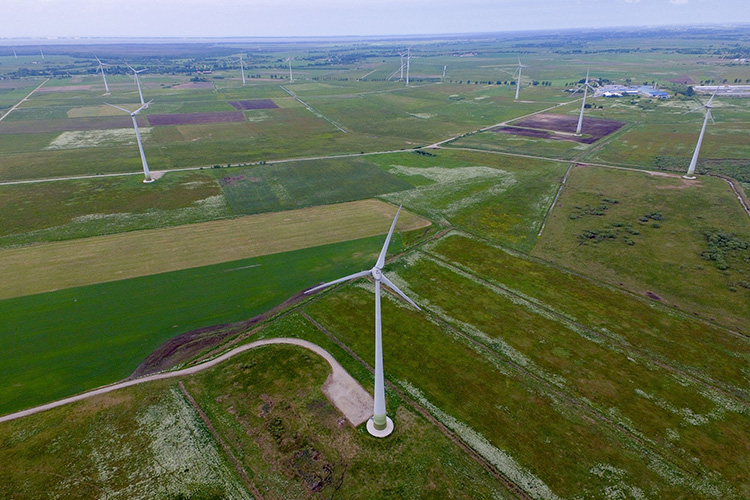 Further investigation revealed a connection between his wife’s investment in a Belarus energy firm and Gazprom’s bank in Belarus, raising more questions about Skardžius’ political activities.

Skardžius’ wife, Snieguolė Skardžiuvienė, receives €24,000 per year for the lease of family land in the Šilutė district – an area of Lithuania famous for its windy climate and wind farms. The area she rents out is about 28 hectares, but less than 1 percent of it is actually being used by the wind farm.

Officially, the land is rented to a construction company. But its real user -- hidden by a sub-lease agreement -- is a wind power company owned by one of Lithuania’s largest renewable energy groups.

While pocketing significant revenue from the deal, Skardžius has also sought to block changes to a regulation that would harm the interests of the business that’s operating the wind farm.

The parliamentary inquiry turned up an unexpected connection. A renewable energy business in Belarus, in which Skardžius’ wife is a shareholder, is being funded by Belgazprombank, a Belarusian bank owned by Gazprom, the Russian energy giant.

Parliamentary investigators are also examining still another deal where Skardžius’ wife received significant income for selling a business to Russian investors. The money was paid in 2013 for a lakeside resort, with a promise to turn it into a modern leisure base. Four years later, none of these promises have come true.

A Deal Behind a Deal

To start with the wind farm, Skardžius reported his family’s income from renting the land as required, but the official data is only part of the story. 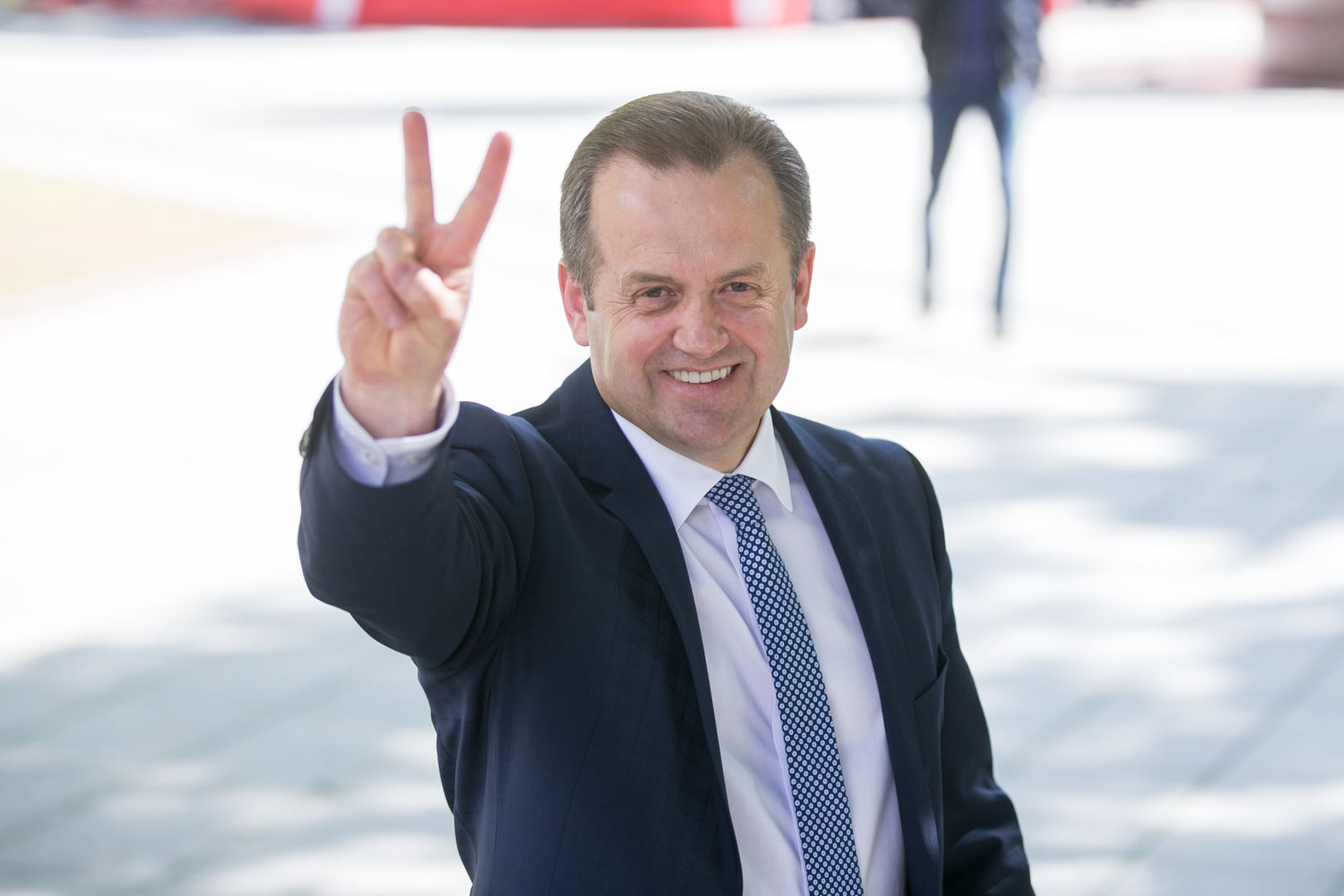 Artūras Skardžius. Credit: Žygimantas Gedvila / 15minIn the financial declaration Skardžius filed while running for parliament in 2012, he declared that since 2010, his wife has rented the land to a Lithuanian company, UAB Renovacijos Partneriai. The annual income from the deal was 60,000 Lithuanian litas (around €17,400). Four years later, when he ran for re-election, that income had increased to €24,000 (the country had since switched to the euro).

However, an investigation by 15min found that Renovacijos Partneriai, the renter – a construction company with a rather modest turnover – was not the real user of the land.

Instead, land records obtained by the outlet showed that two 0.125-hectare plots of the 28.3 hectares of rented land land were sub-leased to UAB Naujoji Energija, a company that operates one of the biggest wind farms in Lithuania.

An anonymous source provided journalists with a copy of an earlier version of the lease agreement concluded between Skardžiuvienė and UAB Energijos Versmė, which was later taken over by UAB Renovacijos Partneriai. The agreement shows that the land was rented by the parliamentarian’s wife for the sole purpose of installing and using wind turbines, a business that’s booming since the Lithuanian government is required to buy electricity from wind farms at an above-market price, thereby subsidizing alternative energy.

But the rental deal does not make economic sense. Skardžius states that his wife rents the whole plot to the construction company, although there are just two wind turbines installed on about a quarter-hectare of the land. 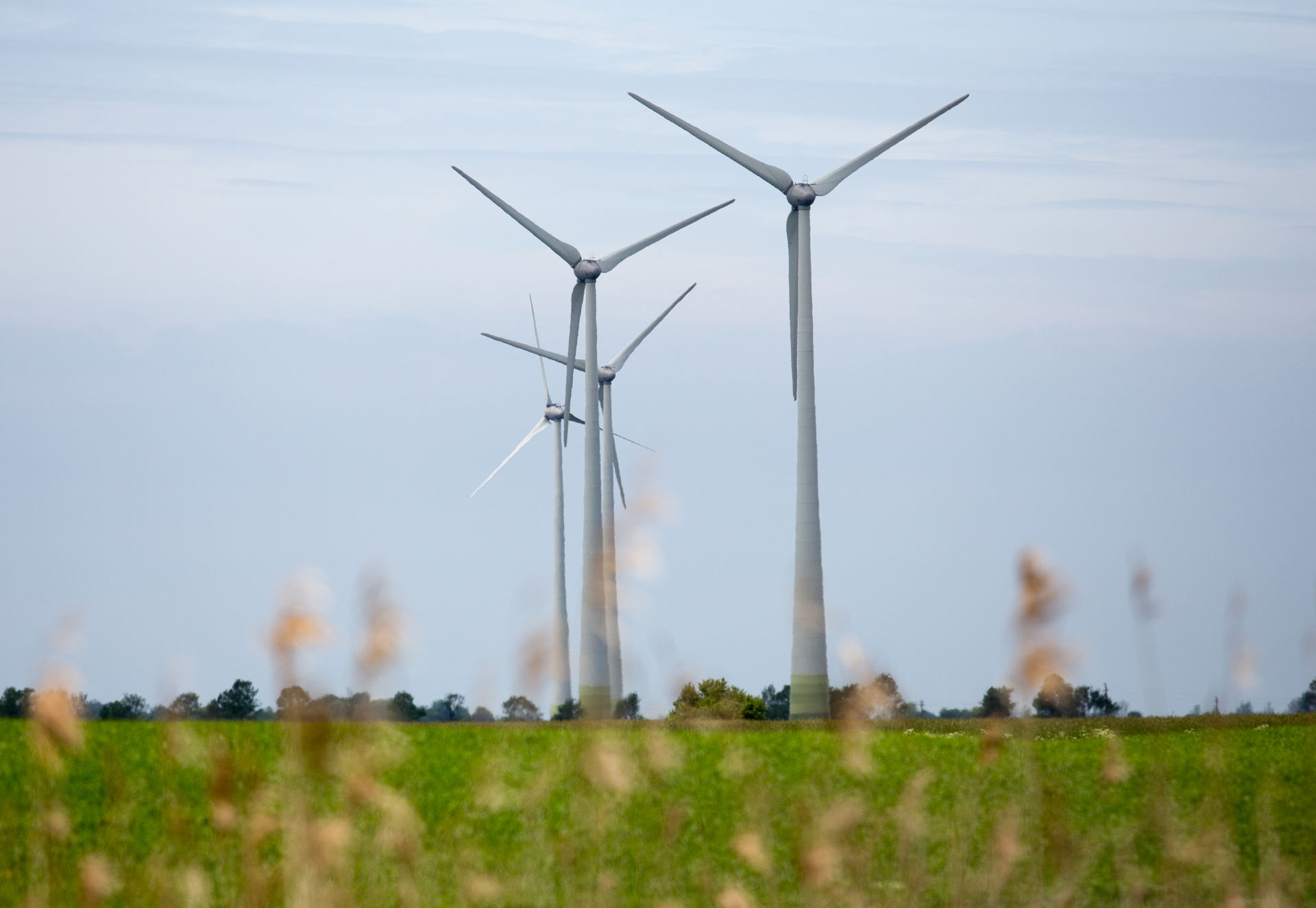 Wind turbines in Lithuania's Šilutė district. (Photo by: Žygimantas Gedvila / 15min)Research carried out by 15min shows that most of the other landowners in the same area rent out only tiny plots of 0.125 hectares in size, enough land to install one wind turbine. The highest rent indicated by the landowners questioned on the phone was €1,425.

Skardžius says his wife is renting more land, which is why she gets more money than the owners of neighboring land plots.

However, Tadas Navickas, the chief executive officer of Naujoji Energija, has stated that his company subleases only two small land plots in the area owned by Skardžiuvienė. He said that the total area of land rented by Renovacijos Partneriai is none of his concern.

Plugged in to Expensive Energy

The leaked documents also explain why Skardžiuvienė’s rental income has increased over the years. According to the agreement, the rent is tied to the price the wind farm earns for the electricity it generates.

Between 2012 and 2016, the price for electricity produced by Naujoji Energija, the real user of the land, has increased by roughly 35 percent. Skadžiuvienė’s income from the land increased by a very similar amount over the same period.

When the story broke on June 14, Skardžius appeared later that day on the top-rated TV show Dėmesio Centre. He did not dispute the authenticity of the contract or its terms, but, in an angry response to the host’s suggestion, he denied having any interest in higher electricity prices.

The Battle Over the Wind on the Sea

Skardžius’s interest in alternative energy goes back a long way, and involves two men he has known for years: Navickas of Naujoji Energija and Romualdas Patalavičius, a former politician.

In 2009, while Skardžius was taking a break from politics, the three jointly founded the Lithuanian Association for Renewable Energy.

(After serving two parliamentary terms from 2000-2008, Skardžius was defeated for the 2008-2012 term and turned to lobbying for renewable energy producers. He returned to Parliament in 2012, and was reelected in 2016).

Today, the three men are connected to a cluster of companies that’s working to develop a major offshore wind installation. Navickas’ company, Naujoji Energija, belongs to a much bigger network of wind farms within which he heads another company called UAB 4Energija. That firm wants to build a major 400- to 800-megawatt wind park 27 kilometers offshore in the Baltic Sea. (“Wind park” is the term for a much larger energy installation, which can have several hundred turbines).

The network is controlled by Vardar Eurus, a Norwegian energy investment fund, through an Estonian company, Nejla Energia. Navickas and 4Energija’s plans for the offshore wind park depend in part on the Lithuanian parliament. Lithuania’s regulations for establishing offshore parks are unusual, in that the required environmental studies must be paid for by private businesses rather than the government.

According to Lithuania’s Special Investigative Service (STT), the regulation favors any company that is able to conduct such a study, giving it a major advantage in obtaining development rights to that area. The STT says that this regulation unfairly limits competition.

Since April 2016, the Lithuanian government has been trying to change the regulation to open the market to more players, to no avail. The amendments were stuck in the parliament, and, according to Tomas Garasimavičius, the prime minister’s advisor on energy and environmental issues, Skardžius – a deputy chairman on the parliamentary Energy Commission – was blocking them.

In a public hearing, Garasimavičius accused Skardžius of using his parliamentary positions to protect the interests of the two companies most likely to benefit from the status quo.

One of the two was UAB Baltic Energy Group, a third company headed by Navickas, which also wants to build the offshore farm and would benefit if the status quo regulations were maintained.

Remember Patalavičius, the third founder of the renewable energy association?

He also has other ties that link Skardžius to Russian energy interests.

Patalavičius is also a business partner of Skardžius’ wife. An investigation by 15min and Belsat TV revealed that they co-own Investenergostroi, a solar energy company in Belarus -- which, it turns out, received loans from a bank owned by Gazprom, a state-owned Russian energy giant. 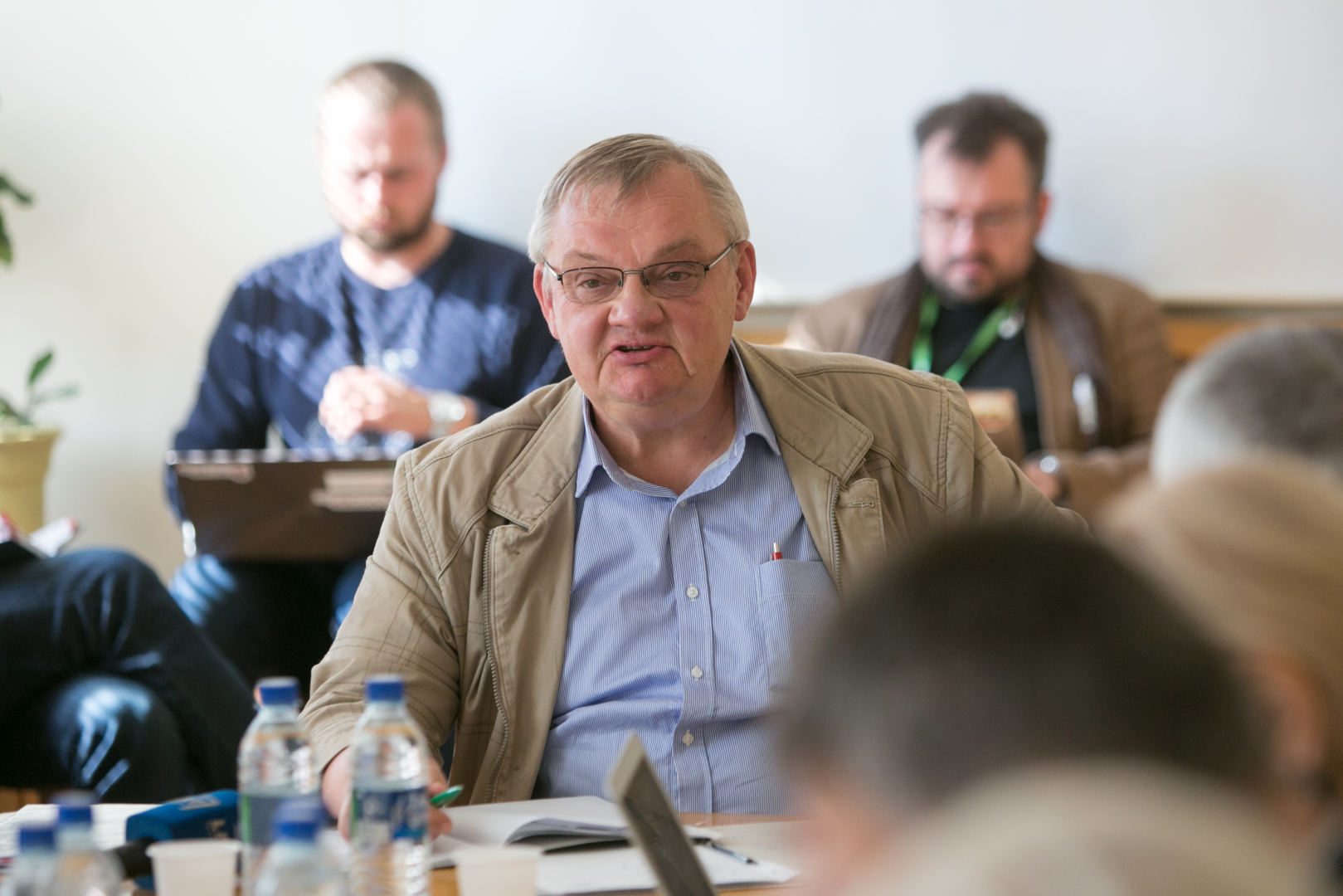 Romualdas Patalavičius. Credit: Julius Kalinskas / 15minOn Sept. 27, Patalavičius was questioned by the parliamentary commission investigating Skardžius. Under oath, Patalavičius admitted that Investenergostroi is funded by Belgazprombank, a Belarusian bank owned by Gazprom and Gazprombank, its subsidiary bank in Russia. According to Patalavičius’ testimony, the loan from Belgazprombank is roughly €500,000.

This new information sheds additional light on Skardžius’ parliamentary activity. In the 2012-2016 parliamentary term, he actively opposed Lithuania’s plans to build a liquefied natural gas terminal in the port of Klaipėda, a stance which was in Gazprom’s interest. However, the parliamentary probe has not yet determined if the money from Gazprombank affected Skardžius’ behavior in the parliament.

In an interview with public TV, Skardžius claimed he knew nothing about the money from Belgazprombank. Afterwards, he refused to discuss the topic further.

Investigators are also probing another deal they think might involve kickbacks to Skardžius from early 2013, when his wife sold a company called Kornelita for 460,000 litas (€133,225).

The buyer – another Lithuanian company called Daugų Sala – was really controlled by a company in Moscow called Traditsiya-L. Apart from buying Kornelita, the Russians also repaid a loan of 440,000 litas (€127,433) that Skardžiuvienė had made to the company back in 2004.

There is no obvious reason why the Russian investors would want to buy Kornelita, which operated a dilapidated resort near the small town of Daugai in southern Lithuania. The company had lost money for years.

The buyers – businessmen from Russia of Armenian origin – publicly pledged to build a field hockey training facility and expand the resort’s leisure infrastructure.

But the promises were never fulfilled -- journalists from 15min who visited the property this spring saw no new facilities. Later, one of Traditsiya-L’s owners, Hrach Petrosyan, said the investment failed due to a change in Lithuanian attitudes towards Russian investment. 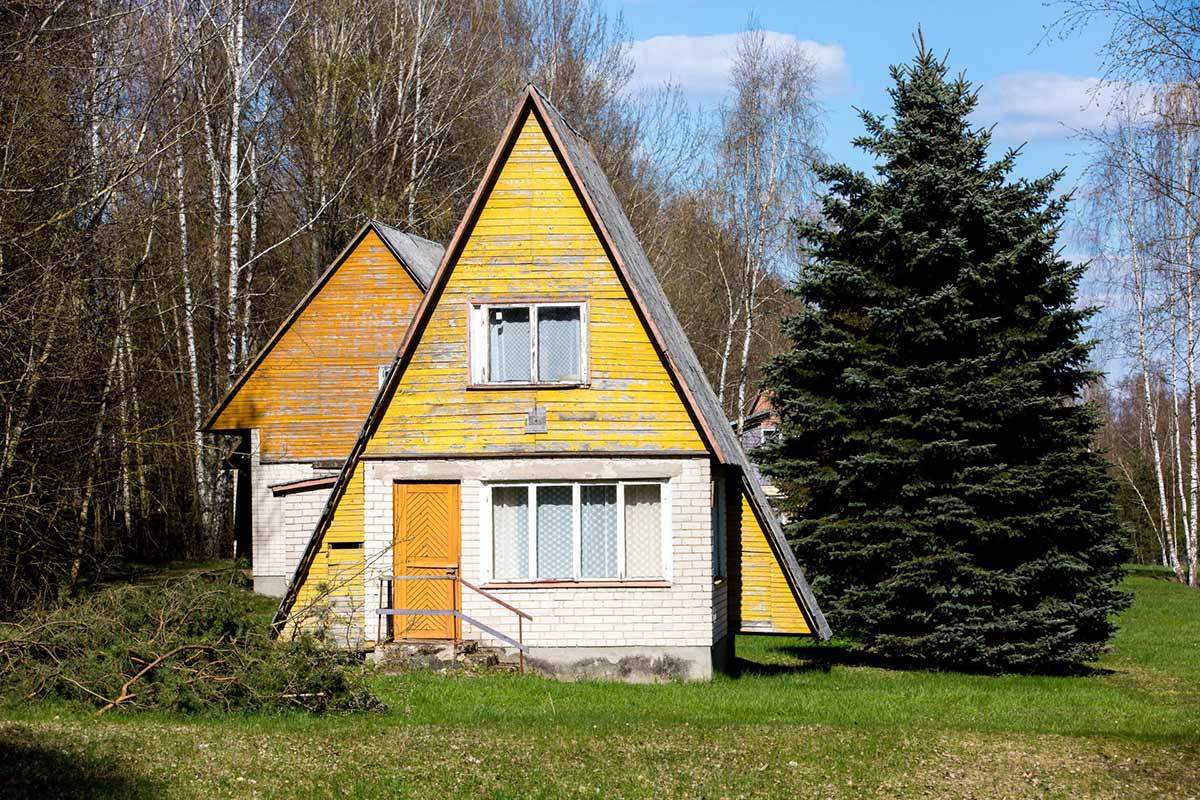 The lakeside resort near Daugai. Credit: Vidmantas Balkūnas / 15min“I think it’s connected to the harsh sanctions policy that has touched all the shareholders. And, probably, the fear spread by local paranoiacs,” he said in a written statement.

The Daugai deal was complicated. Skardžiuvienė’s Kornelita didn’t own the actual land, just the run-down buildings. The land was sold separately to the family of an intelligence officer who supervised energy affairs and was related to Skardžius.

Jakučionis was fired from the VSD on September 27, following the launch of an internal investigation after the revelations disclosed by 15min. VSD stated that Jakučionis was fired because of violating the law by being involved in business activities, which is prohibited for intelligence officers.

After the 15min investigation was initially published on June 14, the political reaction was swift. On the same day, Viktoras Pranckietis, the speaker of the Lithuanian parliament, demanded an official parliamentary inquiry. Soon, his position was supported by 37 of the parliament’s 141 members, including the prime minister, as the news agency Baltic News Service (BNS) reported the day after.

The investigation was launched one week later. Investigators want to know whether Skardžius improperly used his political power to personally benefit from his parliamentary activity and will also look into the origins of the Russian money invested in the Daugai resort, as well as the connection of the Belarusian company Investenergostroi to Skardžius. The commission investigating Skardžius must conclude by November 10.

A second investigation into Skardžius’ parliamentary activity was launched by the STT and was announced on July 27 . The anti-corruption authority is trying to determine whether he has committed corrupt criminal acts regarding the development of renewable energy policy legislation.

In response to 15min’s original story, Skardžius went on national TV and accused the reporter who broke the story of being “a troll” and demanded that he publicly apologize to his wife. Skardžius claims he did nothing illegal and insists his actions were in the public interest. He also claims the journalist who wrote the initial story might be a supporter of the opposing Conservative Party.

"What Pancerovas has written is libel and lies,” he said. “All of my amendments after I quit the [wind energy] association and became a member of the Seimas again in 2012 were dedicated to defend the public interest,” he said.