Romanian​ ​Politician Named in Scandal Hits Back at Journalists: “Peace is Over”

The Bucharest office of RISE Project, an Organized Crime and Corruption Reporting Project (OCCRP) partner, underwent an unannounced inspection by the anti-fraud bureau of Romania’s National Fiscal Agency (ANAF) even as important Romanian politicians threatened the outlet in both public and private. 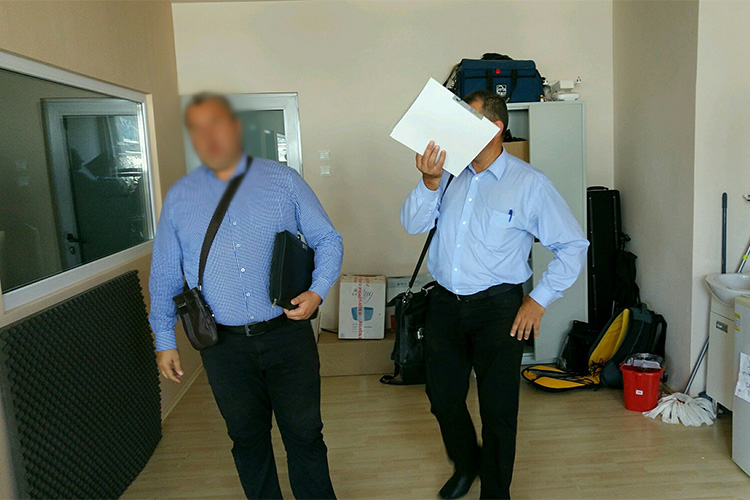 Officers from the Romanian Anti-Fraud Authority at the offices of RISE Project, OCCRP's Romanian partner, during a surprise inspection. (Photo: RISE Project)

The July 6 inspection followed the outlet’s revelation that Liviu Dragnea, president of the ruling Social Democrat Party (PSD) and head of the lower chamber of Parliament, was connected to Tel Drum SA, a secretive company awarded hundreds of millions of euros from Romania’s budget in insider deals.

On April 28, OCCRP and RISE Project published an investigation detailing how Dragnea benefitted from investments in Brazil made by a manager of the company. The report was seen by Record TV, Brazil’s second-largest TV network, and its reporters joined RISE journalists to produce a detailed follow-up story published and aired in Romania and Brazil on July 3.

For that story, new documents from sources within the Brazilian Border Police provided details about Dragnea’s visits to Brazil with two Romanian businessmen with whom he had claimed to have no dealings. The documents included travel dates and flight numbers as well as entry and exit points into Brazil, proving the trio travelled together.

One of the businessmen was Costel Comana, a railroad company owner who got significant Romanian government contracts but later committed suicide in an airline bathroom. The second was Mugurel Gheorghiaș, a manager of Tel Drum SA, the secretive road construction company under investigation in Romania for corruption. The two men and Dragnea were long-time friends.

A second follow-up investigation published by RISE Project on July 6 detailed efforts by Dragnea’s government to hijack a law enforcement agency that had previously investigated his allegedly corrupt dealings.

As Romania’s ANAF inspected RISE Project offices, Dragnea and other government officials warned journalists in TV interviews and in WhatsApp messages that he was ready to fight back. He said in a TV interview: “The peace is over.”

Dragnea’s party controlled the Romanian parliament when OCCRP awarded it the “Organized Crime and Corruption Person of the Year” in 2013 for trying to pass legislation that would legalize corruption by Romanian politicians. The government tried to pass the legislation again this January, but street protests by hundreds of thousands of Romanians forced it to back down.

The RISE story that seems to have provoked Dragnea goes back to Feb. 16, 2009 -- a good year for him and his friends. On that day, according to RISE, a TAP Portugal flight 165 from Lisbon landed in Fortaleza on Brazil’s northeast coast.

Aboard were the three Romanians who would go on to play such important roles in their country’s economy and politics in the years to come.

Dragnea became one of Romania’s most powerful politicians, heading the ruling PSD party despite receiving a suspended jail sentence for rigging a political referendum.

Comana’s life followed a more tragic arc. One of his main companies handled hundreds of million of euros in Romanian public funding, only to be subsequently investigated for fraud. Six years later, he committed suicide in the toilet of an airliner just before it landed in Costa Rica.

In 2009, Gheorghiaș was the manager of Tel Drum SA, a Romanian company Dragnea privatized. The company was controlled by bearer shares, meaning whoever held physical possession of the shares controlled the company. In 2008 that was Gheorghiaș, but by 2009 the owner was unknown. This company, too, won hundreds of millions of euros in tenders covered by the state budget.

According to data obtained by Record TV, in all, between 2009 and 2016, Dragnea landed in Fortaleza 16 times; Gheorghiaș 13 times; and Comana 11 times. Sometimes the three arrived together; sometimes they came in pairs; and on other occasions they left together or in pairs. Most visits overlapped, with Dragnea arriving or leaving a few days apart from Gheorghiaș and Comana.

The records of these comings and goings counter Dragnea’s and Gheorghiaș’ claims that they had not kept in touch after their college years. Dragnea denied any connection to Tel Drum SA, which his former colleague managed, although he was believed to be its secret owner.

In a 2011 interview with Romanian newspaper Adevărul, Gheorghiaș said, “Yes, we used to be colleagues at the Faculty of Transportation. We sang together in a band.”

“What’s wrong with this? We did not have many options to have fun. I can’t say we kept in touch. Now I know him [only] from TV.”

Border logs from Brazil obtained by Brazilian reporters show that their connections were much closer than that. Dragnea and Gheorghiaș visited Fortaleza three times in 2011 and spent their holidays in a luxury villa that Gheorghiaș bought the previous year.

On one of those occasions, on Feb. 1, 2011, Dragnea and Gheorghiaș got Brazilian exit stamps two minutes apart and boarded the same plane back to Europe.

On July 3, the day the investigation into Dragnea’s travels was published in Brazil and in Romania, an OCCRP/RISE Project editor received a WhatsApp message from Dragnea claiming that RISE reporters were harassing him and breaking the laws related to respecting his privacy and personal data.

A screenshot of a WhatsApp message exchange in which Liviu Dragnea warns RISE reporters that they are breaking the law in their investigation of him (and wishes them good luck). (Photo: RISE Project) Dragnea ended the message by wishing the journalists good luck.

On July 5, RISE published on its Facebook page a teaser announcing a new investigation into Dragnea’s attempt to take over one of Romania’s secret services.

That same day, Dragnea showed up in Parliament and denied any connection to potentially corrupt businesses. He said he notified the Brazilian embassy that his personal data had been handed to journalists.

He said he believed lots of money was being spent to publish lies about him and asked about RISE’s sources of funding.

It was on the next day that the Romanian Anti-Fraud Authority unexpectedly arrived at RISE’s offices in Bucharest. Asked by RISE via WhatsApp if the surprise inspection was his doing, Dragnea said: “No!!!! I just found out about it!!!!”

He then appeared on a TV station where he said he was outraged by the inspection, speculating that it might have been a set-up. Romanian media organizations and think thanks condemned the action and insisted that the anti-fraud authority must not become a political tool.

Soros’ Open Society Foundation (OSF) is one of a number of funding sources for both RISE and OCCRP. Neither Soros nor OSF has any editorial influence over the reporting produced by OCCRP and RISE Project. 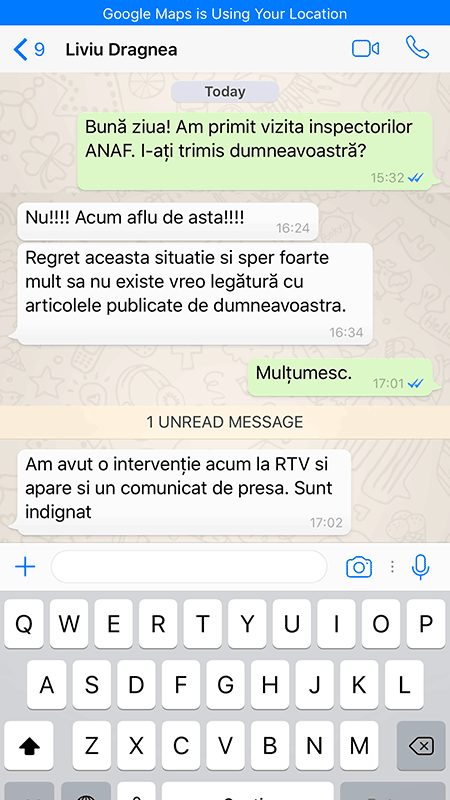 A screenshot of a WhatsApp message exchange in which Liviu Dragnea denies having anything to do with the unannounced inspection of RISE Project. (Photo: RISE Project) Dragnea’s lawyer, Maria Vasii, also claimed on TV that RISE Project had hired a British detective agency to follow Dragnea. “Rubbish. Why would we hire a detective when we’re investigative reporters,” said Attila Biro from RISE.

The Secret Report and the Fight for the Secret Service

A few hours after anti-fraud inspectors left the newsroom, RISE Project published its new investigation which detailed attempts by Dragnea’s close associates in Parliament to take over the DGPI, a police intelligence agency that had previously investigated Dragnea, by changing a law that governs its activities.

The change would have eliminated the role of the National Security Council, which includes the president and the heads of the other intelligence agencies, in appointing the head of the secret service.

If the change take effect, the decision on who leads the service will be made solely by the Minister of Internal Affairs -- a position currently filled by Carmen Dan, a longtime friend and former adviser of Dragnea’s. It is ultimately up to Romania’s president, Klaus Iohannis, to approve or reject the proposed change.

The report alleges that Dragnea owns Tel Drum SA and describes a series of corrupt deals that involved the company misusing Romanian and European Union funding. The same report mentions deals between Dragnea and Calin Popescu Tăriceanu, the head of the upper house of Romania’s parliament and Dragnea’s main political ally.

For the investigation, RISE Project reporters interviewed a former officer of the unit that investigated Dragnea in Teleorman County, Romania’s poorest. Dragnea was the president of the Teleorman County Council, the most important county-level political structure in Romania.

The officer, who asked not to be identified for fear of retribution, said that despite gathering significant evidence of wrongdoing, prosecutors would not act. “Nothing turned into penal cases. We only managed to arrest members of a criminal clan with no connection to Dragnea,” he said.

He also warned reporters that they were risking retaliation just by asking questions. “Dragnea has people everywhere, in all the institutions,” he said. “Nobody will help you with information.” In one meeting, the officer handed reporters the 2011 report on Dragnea.

“This report will help you better understand the situation here... If we all had done our work properly, we would not have ended up in this situation,” the intelligence officer said.

The publication of the report ignited a media and political firestorm. Minister of Internal Affairs Dan denied its authenticity and vowed that the state would do everything in its power to identify the source of the leak.

Liviu Popa, former head of the Romanian police, confirmed to RISE Project that he had seen the 2011 report, as did Iulian Ciorobescu, who was the head of the police in Teleorman County that year.

Shortly after RISE published its findings, Romania’s main anti-corruption institution, the National Anti-Corruption Prosecution (DNA), announced that the information published by RISE Project, including the secret report and the revelations about the Brazilian side of the affair, would be used in an ongoing investigation.

Brazilian prosecutors are also looking into possible money laundering connected to the investments Dragnea’s associates made in the city of Fortaleza and in Cumbuco, a coastal village and popular tourist spot.

Brazilian Prosecutor Rómulo Moreira Conrado told Record TV that if the money used to acquire Brazilian property was illicit in origin, this would constitute a money-laundering case regardless of the fact that it had come from Romania.