Between mid-2015 and mid-2016, Privatbank, the largest bank in Ukraine, handed out over US$ 1 billion in loans to firms owned by seven top managers and two subordinates of its owner at the time, Ihor Kolomoisky, according to a copy of its 2016 loan book reviewed by a reporter for OCCRP. Subsequently, in December 2016, the bank was nationalized after the government found that it was severely undercapitalized, threatening the country’s financial system. 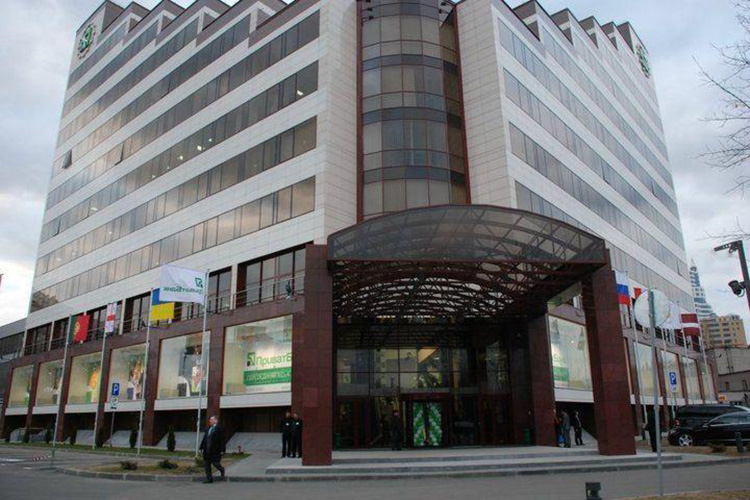 The headquarters of Privatbank in Kyiv, Ukraine. (Photo: Privatbank)

At least $185 million of the $1 billion in insider loans -- and possibly the entire amount -- was not backed by collateral, a serious violation of banking practices.

To receive the money, the nine recipients created 28 companies in Kharkiv, Ukraine’s second-largest city. Almost all were founded in 2015, all except one with equity of just 1,000 Ukrainian hryvnia ($38) each -- a sign that they were paper companies. Privatbank then approved loans to the firms totaling 28 billion hryvnia (over $1 billion). 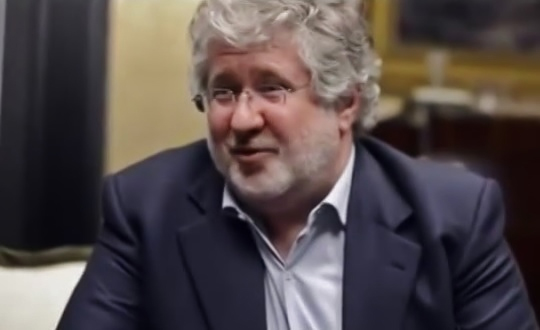 Ihor Kolomoisky, a Ukrainian oligarch and former owner of Privatbank, Ukraine's largest bank. Seven of his lieutenents and two of their subordinates received loans totaling over $1 billion from Privatbank in 2016. (Photo: HOT NEWS, CC BY-SA 3.0 )Privatbank holds 35 percent of all individual deposits in Ukraine, meaning the savings of ordinary people. It was founded and owned by Kolomoisky, a wealthy Ukrainian businessman, and his partner, Hennadiy Boholiubov. Kolomoisky and Boholiubov are believed to have additional business interests in energy, media, aviation, metallurgy, and agriculture, which place them second and third, respectively, among the top 100 richest Ukrainians in a 2016 ranking by Forbes Ukraine. Each man is estimated to be worth $1.3 billion.

Following his support of the Euromaidan revolution, in March 2014 Kolomoisky was appointed governor of the east-central Ukrainian region of Dnipropetrovsk, where Privatbank is headquartered. Ukrainian President Petro Poroshenko fired Kolomoisky one year later, in March 2015, after a political falling-out over Kolomoisky’s influence over Ukrnafta, Ukraine’s largest and state-owned oil company. Later that year, in October 2015, a close ally of Kolomoisky, Hennadiy Korban, was arrested and charged with heading an organized crime group, taking hostages, and embezzlement, according to Interfax Ukraine. 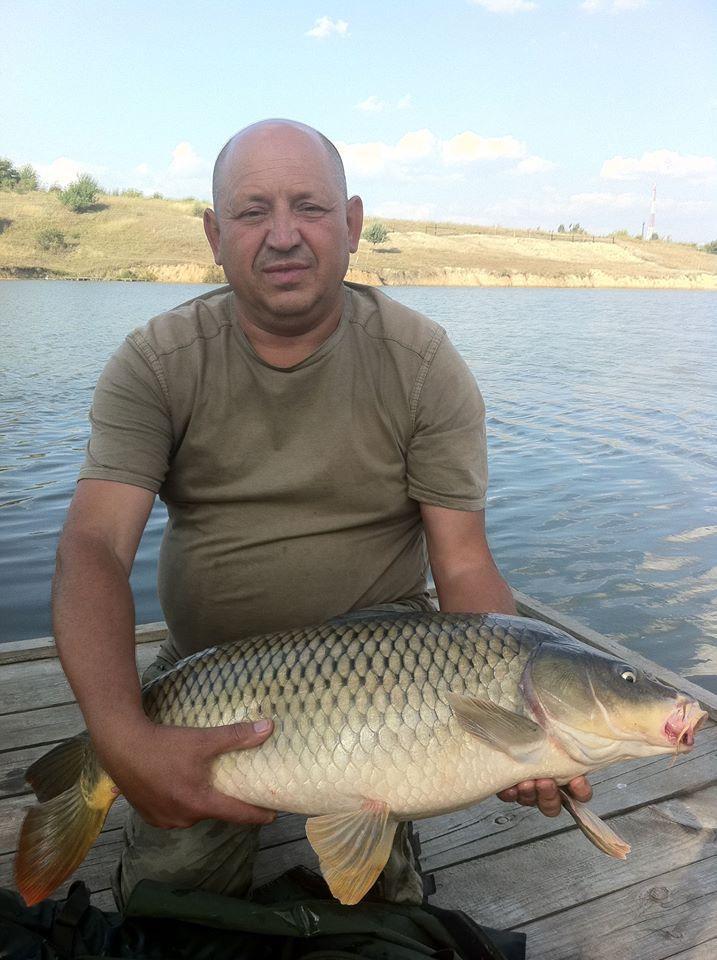 Viktor Shkindel, the former chief executive officer of the Dnepropetrovsk airport, is a recipient of $154.1 million in loans from Ihor Kolomoisky's Privatbank. (Photo: Facebook)On Dec. 19, 2016, Ukraine’s government nationalized Privatbank after the National Bank of Ukraine (NBU) found it insolvent. “The alternative would have looked irresponsible, as it would have meant to close our eyes, bury our heads in the sand and wait for the bank to fall,” Poroshenko said in a statement, adding that the bank was so undercapitalized that it threatened the entire financial system.

Following the takeover, the NBU announced that as much as 100 percent of Privatbank’s loans had gone to its own shareholders, indicating that the owners were enriching themselves while endangering the savings of millions of Ukrainians. Prior to its nationalization, Privatbank had claimed that only 4.71 percent of its loans had been made to insiders and argued that it had been financially stable.

The over $1 billion in loans Privatbank made to Kolomoisky’s lieutenants accounted for 13.8 percent of its total portfolio of loans larger than $400,000 as of July 2016. 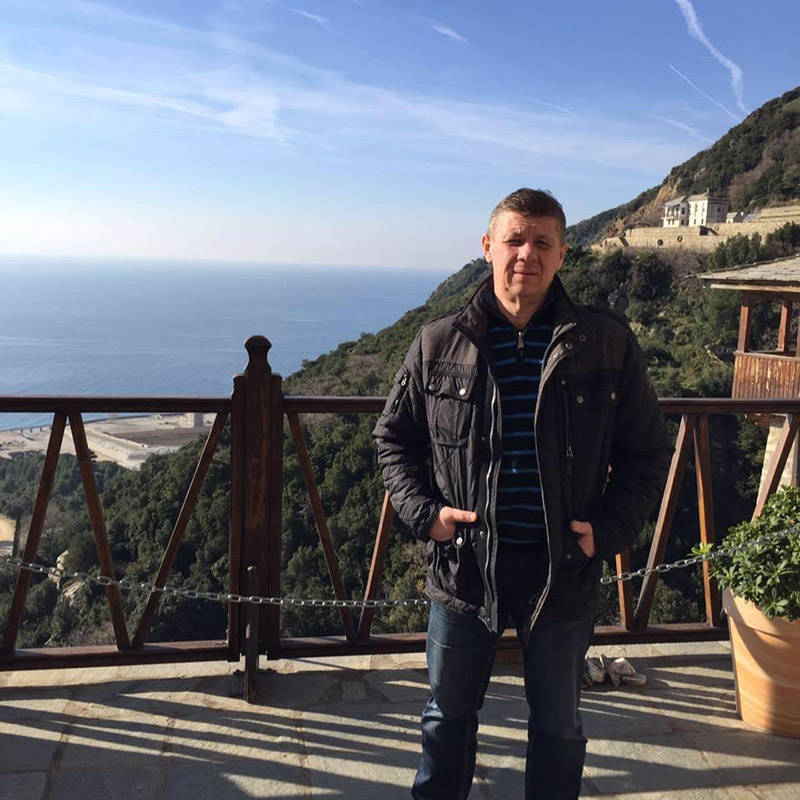 Viacheslav Plakasov, CEO of Optima 770, is a recipient of $136.8 million in loans from Ihor Kolomoisky's Privatbank. (Photo: Facebook)Privatbank is now under new management appointed by the government. On March 6, the deputy head of the NBU, Kateryna Rozhkova, told OCCRP that the Privatbank shareholders "have undertaken to restructure all related party loans by 1 July." However, records show that a month previously, the new Kharkiv-registered companies had all started liquidation proceedings on the same day and all named the same person as liquidator, indicating coordinated action -- and suggesting a lack of intention to return the loans. Since then, the NBU’s governor, Valeriya Gontareva, has resigned, and the central bank is under investigation by the National Anti-Corruption Bureau.

A Privatbank spokesperson confirmed to OCCRP that international auditors had found that three of the Kharkiv borrowers had provided no real collateral for their loans, apart from worthless shares in no-name companies. These three firms hold a total of $185 million in loans, about 18 percent of the total loans to the Kharkiv firms.

Investigations into the other loans are continuing. The coordinated pattern of borrowing suggests that more of the $1 billion in Kharkiv loans likely also lacked collateral. 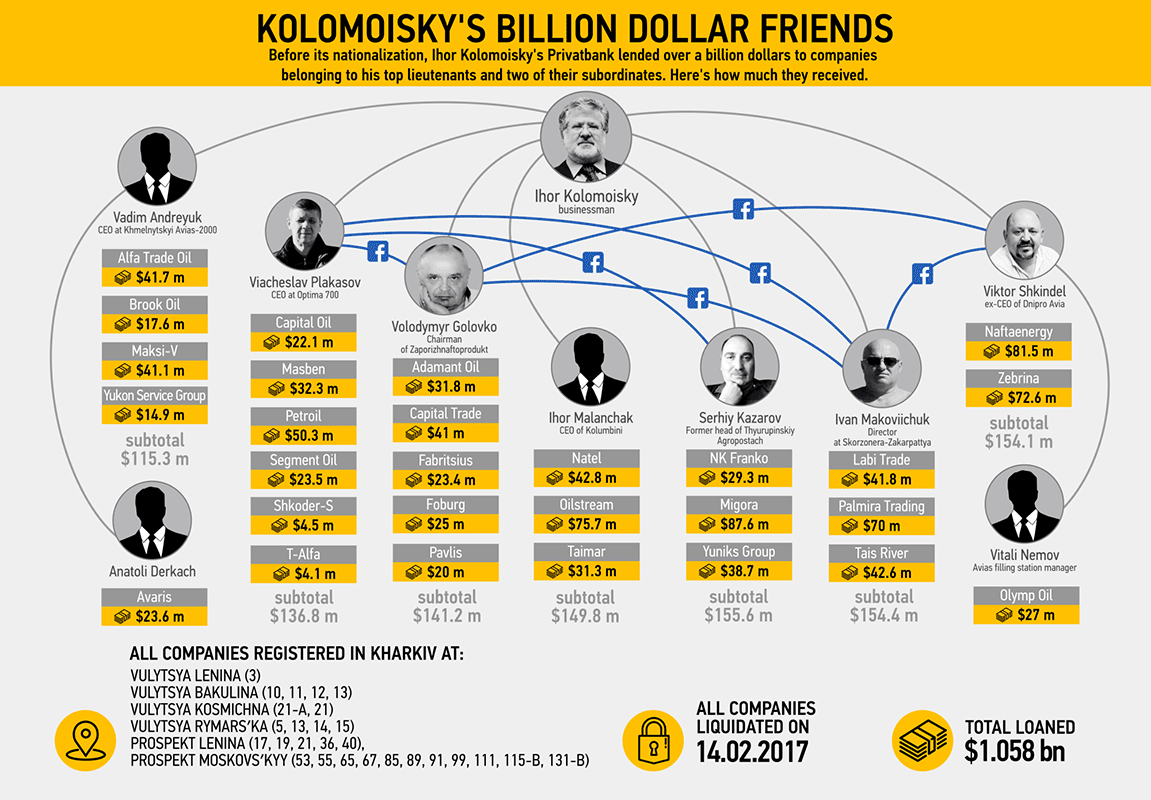 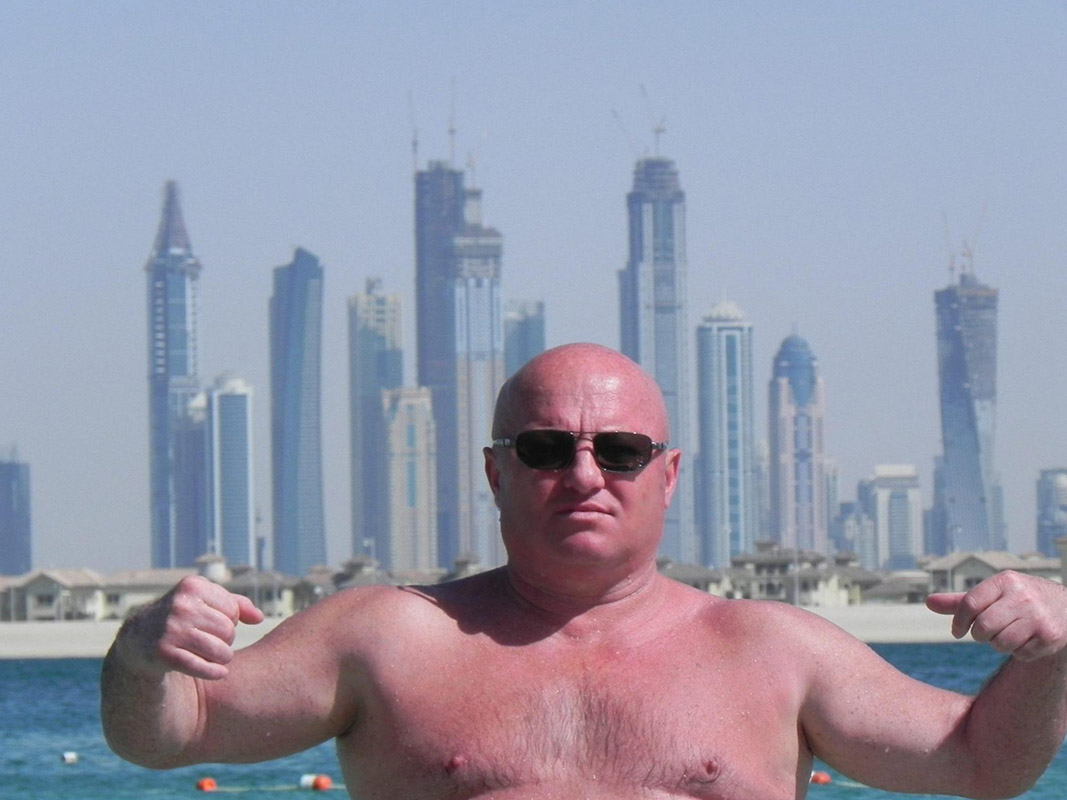 Ivan Makoviichuk, director of tourism company Skorzonera-Zakarpattya, is a recipient of $154.4 million in loans from Ihor Kolomoisky's Privatbank. (Photo: Facebook)The people who own the Kharkiv firms are mostly top managers in businesses controlled by Kolomoisky. Most are also interlinked on Facebook.

Viktor Shkindel, Ihor Malanchak and Ivan Makoviichuk own the three Kharkiv firms known to hold $185 million in unsecured loans. The three men own five additional Kharkiv-registered companies that also got Privatbank loans; in all, their firms hold a total of $458 million in loans from the bank.

Shkindel is a former chief executive officer of Dnipropetrovsk airport, which is also controlled by Kolomoisky.

Ivan Makoviichuk is director of Skorzonera-Zakarpattya, a tourism company owned by Kolomoisky and Boholiubov. 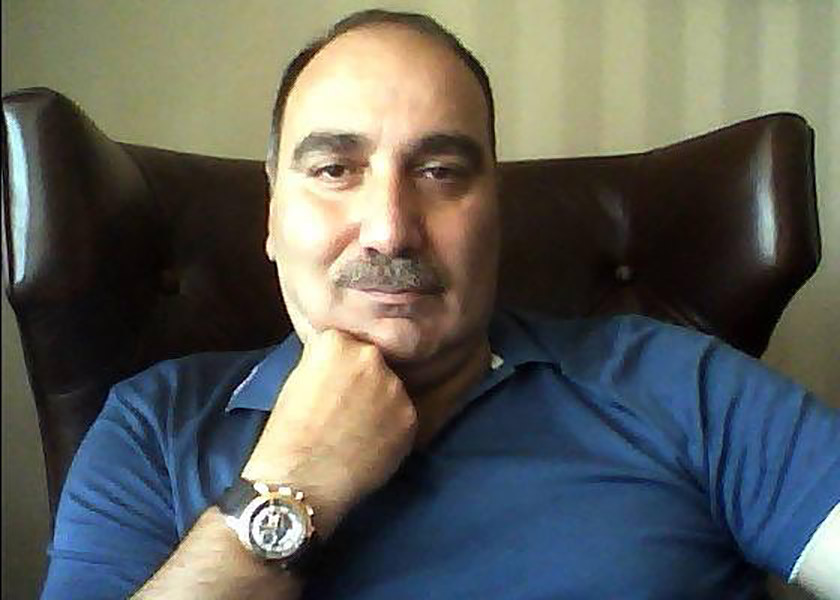 Serhiy Kazarov, former head of fuel supplier Tsyurupinsky Agropostach, is a recipient of $155.6 million in loans from Ihor Kolomoisky's Privatbank. (Photo: Facebook)Ihor Malanchak is the CEO of Kolumbini, a company affiliated with Kolomoisky, according to the company register.

Besides Shkindel, Malanchak and Makoviichuk, the other owners of the Kharkiv businesses that received Privatbank loans are Viacheslav Plakasov, Volodymyr Golovko, Serhiy Kazarov, Vitaly Nemov, Vadim Andreyuk and Anatoliy Derkach.

Viacheslav Plakasov is the CEO of Optima 770, which is related to Privat Group, an unconsolidated business group with holdings in oil, ferrous metal, and agriculture which is widely attributed to Kolomoisky and Boholiyubov.

Zaporizhzhya-based Volodymyr Golovko is a former top manager in Kolomoisky’s refinery business. Serhiy Kazarov is former head of Tsyurupinskiy Agropostach, a fuel supplier which is connected to Privat offshores. 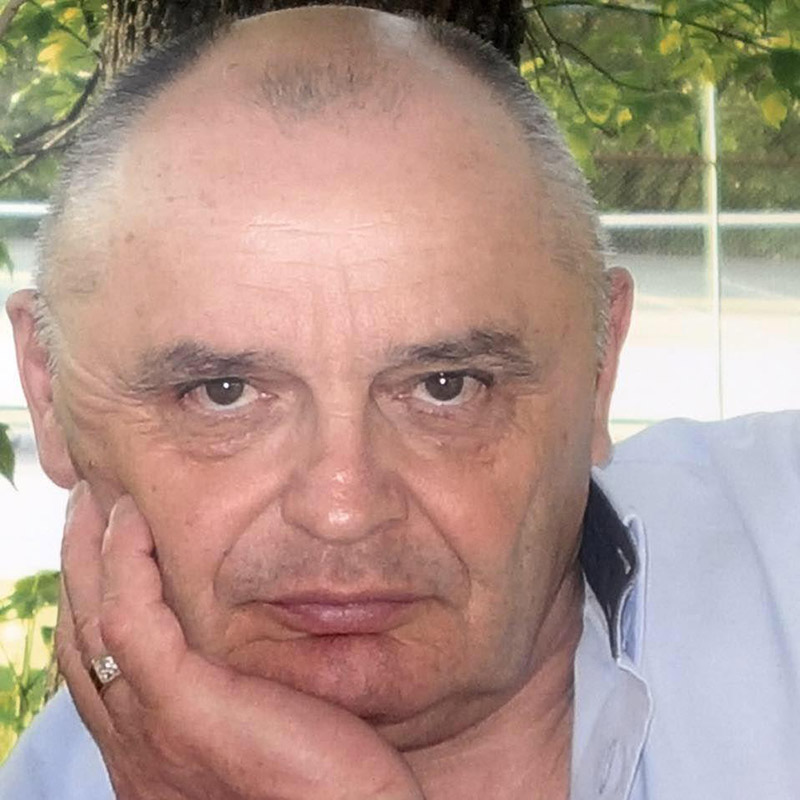 Volodymyr Golovko, Chairman of Zaporizhnaftoprodukt, is a recipient of $141.2 million in loans from Ihor Kolomoisky's Privatbank. (Photo: Facebook)Five of the above-named, who are on Facebook, did not respond when contacted via  the social networking website.

Vitaly Nemov, owner of Olymp Oil, which received 715 million hryvnia (about $27 million) in loans, is manager of a gas station for Avias, under Shkindel’s command. His CV shows him looking for a job as a gas station manager with a monthly salary expectation of 6,000 hryvnia ($226).

Nemov confirmed his ownership of Olymp Oil but denied borrowing $27 million. “There is no loan,” he said when contacted by phone, “and they have already closed the firm,” he said about Olymp Oil. He declined to specify who he meant by “they,” but acknowledged being acquainted with Shkindel.

Vadim Andreyuk, owner of three Kharkiv firms holding  2.7 billion hryvnia (about $115.3 million) in Privatbank loans, is head of the sales department of the state oil firm Ukrnafta in the Khmelnytskyi region, according to an online resume.

Khmelnytskyi-based Anatoliy Derkach, the owner of Avaris, previously worked as a taxi driver, according to filings he made in a state register of entrepreneurs. The Avaris phone number matched the number of a number of firms run by Andreyuk. When an OCCRP reporter phoned Andreyuk’s office and asked to speak to Derkach, and was put through to him. When asked whether the loan Avaris received had been repaid, Derkach said “apparently,” but hung up when asked whether Andreyuk was his boss.  Privatbank did not confirm this information.

Kolomoisky did not respond to requests for comment and Boholiubov could not be located.