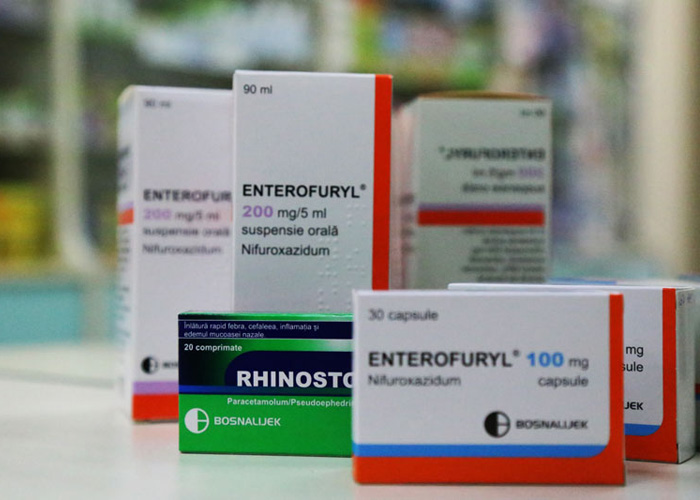 Dita Estfarm, the most important player in the pharmaceutical market in Moldova, is being examined by prosecutors from Bosnia and Herzegovina for a series of transactions with the Bosnian pharmaceutical company Bosnalijek.

Seven people, including the former director of Bosnalijek (the largest pharmaceutical company in Bosnia and Herzegovina, 19 percent state-owned), were arrested last year by prosecutors on allegations of money laundering, tax evasion and forgery. The illegal activities resulted in profits of more than US$ 13 million, prosecutors say. 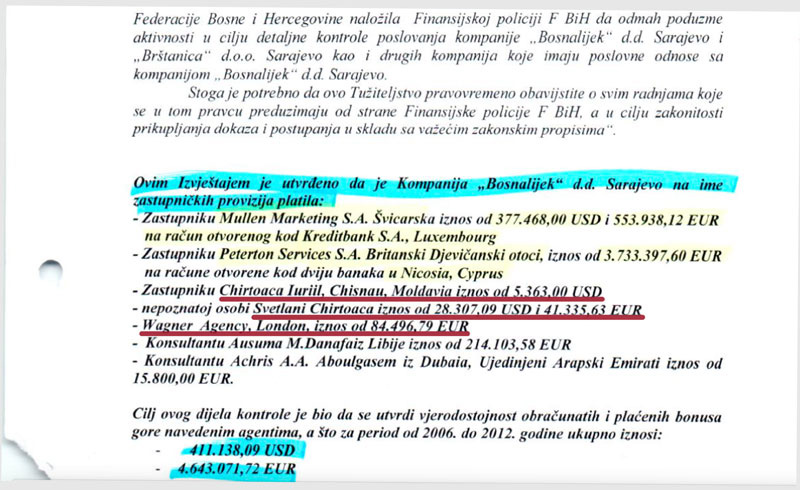 The Financial Police in Sarajevo examined contracts and payments made by Bosnalijek from 2006 to 2012. RISE reporters obtained the Bosnian investigators’ reports, which showed the director of Dita Estfarm, Iurie Chirtoaca, and his wife, Svetlana, appearing alongside companies from Russia, the United Arab Emirates (Dubai) and Libya.

Documents show that during that period Bosnalijek and Dita Estfarm signed yearly cooperation agreements. Overall, Dita Estfarm sold drugs worth more than € 2.5 million in Moldova under these contracts.

The first contract between Bosnalijek and Dita Estfarm, signed in 2006, promised to refund the Moldova-based company 10 percent of the total value of drugs sold. However, the company did not get that refund in 2007 and 2008; rather, the money appeared in the personal accounts of Iurie and Svetlana Chirtoaca.

Money to the Chirtoaca family

Based on the 2007 contract, Bosnalijek transferred more than US$ 5,000 to the account of Chirtoaca, and more than US$ 28,000 to his wife's account. According to the documents, Svetlana Chirtoaca had nothing to do with the services that were rendered by her husband.

A year later, Bosnalijek transferred about € 41,000 to Svetlana Chirtoaca’s account. This time, the documents say the fee was paid pursuant to a decision of the Department of International Payments within Bosnalijek.

Iurie Chirtoaca told RISE Moldova reporters that the transfer fulfilled obligations spelled out in contracts with Bosnalijek. He said that he and his wife prepared dossiers for drug registration to the Moldovan Medicines Agency, developed market studies on the registration of new medicines in Moldova, and that this was pay for those services.

As he told RISE, “I'm a doctor and my wife is a doctor. We have provided these services perfectly legally. I took care of it in 2007 and 2008. Once, I gave up. Not worth it. In parallel, we had agreements of this kind with other firms.”

In 2009 and 2010, Bosnalijek signed similar consulting contracts with the Wagner Agency LLP registered in the United Kingdom (UK).

The Wagner Agency was founded in 2008 by two offshore companies located in the Seychelles: Trevis Investment Management Ltd., and Worldwide Holdings Ltd. It is not known who is behind those companies. (Details: HERE)

As in the earlier agreement with Chirtoaca, Bosnalijek agreed to pay Wagner Agency LLP 10 percent of the total value of drugs sold by Dita Estfarm in Moldova. In return, Wagner Agency LLP was to provide “consulting services relating to the sale and placement of products on the Moldovan market for Bosnalijek.”

During the consultancy, Wagner Agency did not report to UK tax authorities any transaction or income, even though Bosnalijek paid it about € 85,000. 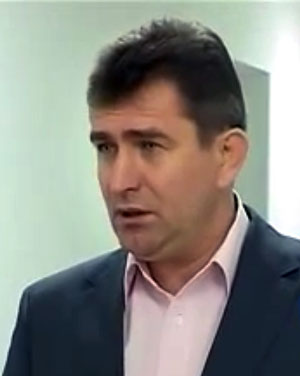 Iurie Chirtoaca, director of Dita EstfarmChirtoaca said he proposed to the Bosnian partners that they should contract a “specialized” company. He said, “In 2009 I had a discussion with Bosnalijek. I told them to find a firm specializing in consulting. In a discussion with their lawyers (they) found Wagner [...] Lawyers have recommended Wagner. It's a lousy firm, which had two employees there. There's nothing spectacular.”

Chirtoaca said he has no other connection to Wagner.

Chirtoaca said he is not a suspect and is not even considered a witness by the prosecution in Bosnia and Herzegovina or Moldova. He said that this “shows the legality of my actions.”

However, on April 11, the prosecutor in Sarajevo told RISE Moldova reporters: “The Cantonal Prosecutor's Office of the Sarajevo Canton is engaged in collecting evidence as part of the ongoing investigation of: authorization and payment of the fees related to contracts signed with the consultants of company Dita Estfarm in Moldova.”

In Moldova, the General Inspectorate of Police is working on another criminal case that includes Dita Estfarm. A list of companies suspected of tax evasion includes the name of Dita Estfarm. (Details: HERE)

In 2014, Dita Estfarm ranked in the top six of the largest importers in Moldova, with sales of approximately 1.3 billion lei (US$ 66 million). The firm is a leader and often contracts with the state, signing many agreements in the last five years.

According to the Public Procurement Agency (PPA), from 2011-2015, Dita Estfarm got almost one billion lei (US$ 51 million) from contracts signed with public institutions. In 2015 alone, the total value was over 250 million lei (US$ 12.7 million).

On March 27, 2015, Dita Estfarm was included by the PPA in its list of prohibited traders and subsequently banned from participating in state tenders for the next three years. The stated reason was because it failed to deliver products on time to several hospitals in the country, including gloves, syringes, cotton and infusion systems.

The company appealed the PPA ban to the Chisinau Central Court, which overturned it four days later, allowing Dita Estfarm to continue to seek tenders. (Details: HERE and HERE)

Throughout its legal quarrel with the PPA, Dita Estfarm continued to participate in public tenders, winning contracts worth more than 200 million lei (US$ 10 million).

Dita Estfarm was founded in 1995 by Iurie Chirtoaca, and Romanian citizens Roland Adrian Tarus and Cornel Mircea Opris. Tarus is the founder of the firm Dita Romania, which was sold in 2006 to a company called Gedeon Richter for € 14.5 million (US$ 16.4 million). Today, Dita Estfarm has a single shareholder: Iurie Chirtoaca, who is also director of the company. (Details: HERE)

Iurie Chirtoaca is also listed as a founder or co-founder in 10 companies, including Family Pharmacy, which is the largest network of pharmacies in Moldova. The company had a turnover of over half a billion lei (US$ 25 million) in 2014.

The Bosnian pharmaceutical company opened an office in Moldova in 2005, headed by Stela Grama, who is the wife of Liberal Democrat Member of Parliament Octavian Grama.

In October 2013, the National Integrity Council (CNI) found that Octavian Grama, then Deputy Minister of Health, “violated the legal conflicts of interest through participation in decision-making in developing the list of state-subsidized medicines that included eight drugs produced by Bosnalijek.”

Octavian Grama asked the court to annul the CNI’s findings; it declined to do so on Jan. 27 of this year. Grama has appealed that ruling to the Court of Appeals.

Stela Grama told RISE Moldova that, in fact, only four products from Bosnalijek were ever on the state-subsidized list. She said the CNI listed several drugs as separate that were, in fact, the same drug but in different dosages.

She said there were three Bosnalijek drugs on the list in 2005 and that she was not involved in the process when a fourth was added in 2010. She said she has eliminated three of the four since then, leaving just one Bosnalijek drug on the state-subsidized list.

She also said her husband had nothing to do with any of these decisions, although she concedes he erred in not declaring a potential conflict of interest.