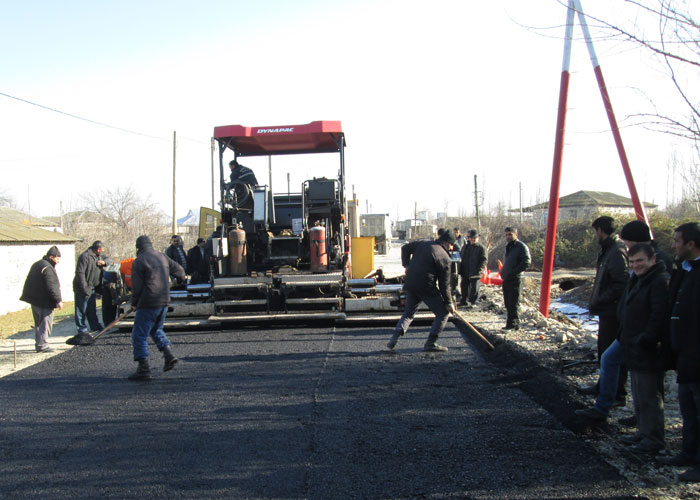 Local officials have never heard of Install Service LLC, the Azerbaijan company that has won the contract to build this road between Jamilliy and Demirchiler. A company that sprang to life three years ago with a capital stake of US$ 15 has since won more than US$ 16 million in contracts from the Azerbaijani government.

It is unclear who is behind the company and what exactly it does, although it generally involves construction and roadwork. The single individual who shows up on company paperwork calls it a “gift from God” but seems to know little about it.

What is clear is that government officials, including the tax office and agencies that awarded more than 120 contracts to the company, have nothing to say about it.

In the murky world of Azerbaijani procurement, a company can be formed and soon have dozens of contracts, even if the main office is almost impossible to find.

Install Service LLC was formed on Feb. 14, 2012 with an original capital of about US$ 15. Usually companies need one year's experience participating in tender applications for Azerbaijan government projects before they begin to win contracts.

But only weeks after it was registered, Install Service LLC won a contract worth about US$ 146,000 from the Lerik Region local government for “Renovation, Procurement of Construction Works.” Lerik is in Azerbaijan’s southern mountains near the border with Iran. Before 2012 was over, the company had won eight tenders totaling about US$ 400,000, with all funding coming from government budgets.

An OCCRP reporter attempted to discover more about the very first tender the company won from the Lerik Region local government, and sent an official request to the State Procurement Agency seeking the names of companies that competed against Install Service for the job. The State Procurement Agency did not supply the information and suggested that any such request should be directed to local government authorities.

The Lerik regional government also declined to provide that information. In a phone interview, spokesman Atamali Najafov said the job was renovation work and was of high quality. "I am not informed about how much was spent," he said. "But I don’t recall the name of Install Service LLC."

When asked what companies had competed for that tender, Baku Metropolitan replied: “in this case, according to Article 9.3-1 article of the "Law on Access to Information,” we can provide you with information only on the conditions of services provided, their price, and changes in those conditions and prices. Therefore, we can not fulfill the request you submitted to us as it is irrelevant.”

Since there was no government information available, OCCRP went looking for the company's legal owner, Eldar Aliyev. He is registered to vote from an address in Sabunchu district in northeast Baku, a hard-to-find property at the edge of the city. Aliyev operates a real estate office and a car repair service at that address, but there was no sign of any construction equipment.

Aliyev refused to answer financial questions about Install Service. In an interview, he said Install Service was "a gift from God" and that most of the business he does is dictated to him by a "religious voice" he hears.

“I don’t remember exactly when we founded Install Service," he said. "I don’t know the location of the company very well, as it is located in the city center. They take me to the office by car when I am needed.

"I am informed about what the company is doing. I have always visited every place where work was being done. When the rivers flood, I go there immediately.  Our company has equipment brought from overseas. The company has about 50 to 60 trucks and bulldozers to pave the roads.

"We do what we are asked to do. If we are told to clean the riverbed, we do that; if we are told to pave the roads, we do that. We have also done a lot of work in the subway system. But I am not a computer that can remember everything." 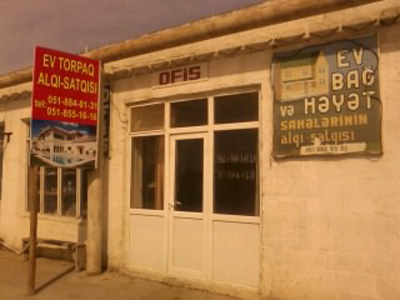 The office of Eldar Aliyev, who says he considers the company Install Service LLC "a gift from God". Aliyev said any further questions should be addressed to Atakishi Muellim.

“We don’t want the media to publish anything about our company," Elmer Muellim said in a phone interview. "We are paying our taxes on time. They are coming and checking us."

Vugar Bayramov is chairman at the Center for Economic and Social Development, a think tank located in Baku.

"For a company to start winning tenders so soon after getting registered is not normal," Bayramov said. “Usually there are certain requirements for companies, based on their area of specialization and the work that has to be done. Tender winners are chosen based on their previous experience and their initial capital before registering the company.

"If a company without any past experience wins a tender worth $100,000, something is wrong. A new company should only be involved as sub-contractors.”

Bayramov says the State Procurement Agency or other government bodies should make public the names of companies that lose tenders. "Otherwise we can not talk about the transparency of the process," he said.

According to another expert of tenders, who didn't want his name to be used for fear of government reprisal,  many tenders in Azerbaijan are simply formalities, since the only bidders are a group of companies who are already affiliated with each other.  He suggests this is the reason why the government doesn't announce the names of companies that lose tenders.

He also refused to meet a reporter in person, and refused to give any information on other company officers or any addresses other than Aliyev’s. Muellim said the government has all the information it needs about the company in order to award tenders.

Install Service currently has a US$ 3.35 million government contract in the Terter region near the disputed enclave of Nagorno-Karabagh to construct a highway between Jamilli and Demirchiler. But Jamilli municipal chairman Sardar Mammadov and Demirchiler municipal chairman Rashid Soltanov both say they have been heavily involved in this local road project, and that neither of them has ever heard of a company called Install Service LLC.

They say the road is being constructed by the Terter Region's own Department of Roads.

This story has been edited.  OCCRP misidentified one of the persons quoted in the story. OCCRP regrets the mistake.