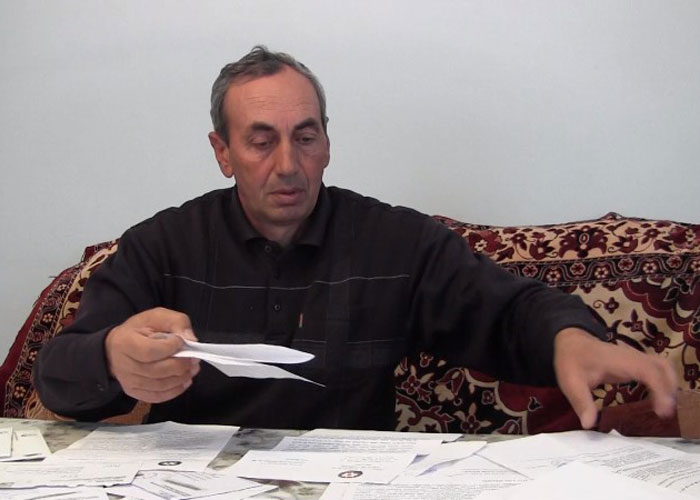 Tarikh Hajiyev looks over documents of companies he is listed as owning.On paper, Tarikh Hajiyev is the founder of seven companies in Azerbaijan. The legal address for all of them is Fuzuli District, Zobujuq town, house 189. That is, indeed, the modest house where he lives.

Tarikh Hajiyev never knew he was such a tycoon until the day in 2013 when he was summoned by the Tax Crimes Preliminary Investigation Office. Officials there informed him that each company has a tax debt between 4,000 and 7,000 Azeri manat (about US$ 3,800 to US$ 6,666).

During the past year, he has made several 300-kilometer trips from the Fuzuli district in southwestern Azerbaijan to the capital, Baku, to protest his innocence to the national tax authorities.

The local tax office is where it all started. "One day my brother told me to bring my ID card and come to his tax office," Tarikh Hajiyev explained to reporters from Meydan TV and the the Organized Crime and Corruption Reporting Project. "I took my ID card and went there. I saw he was waiting for me at the stairs.”

Tarikh Hajiyev remembers his brother telling him to go into a room and give his ID to a young man.  The man told him to sign a number of documents, pointing out where to sign on each. 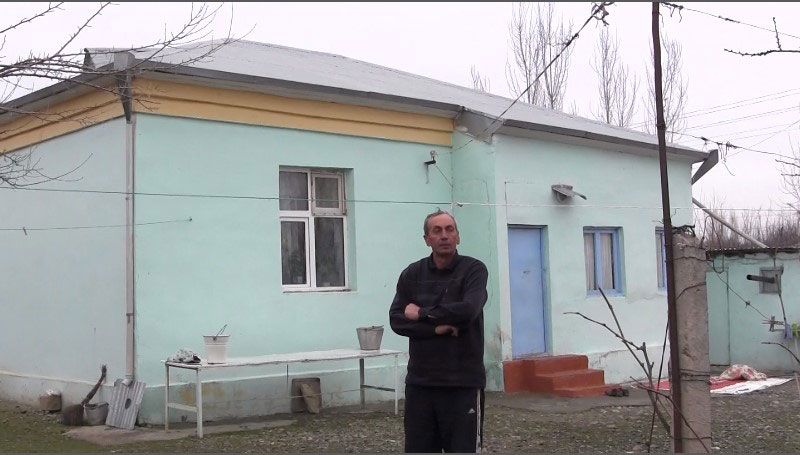 The modest house in which Tarikh Hajiyev lives.Thinking about it later, Tarikh Hajiyev figured out that he had been signing company charters, the basic document in the formation of a company that outlines how the new company will operate.  At the time he didn’t know what a charter was. The young man then took him to a notary to get the documents notarized, and after that, sent him home.

"I didn't think about it at all. I was not interested in details. I was thinking that he is my brother and I should do whatever he asks me to do.”

Tarikh is a proxy – a person who stands in for the real owners. Proxy-run companies are popular in Azerbaijan. The real owners of companies find people willing to act as proxies, which generally means registering companies in their own names without asking too many questions. Legally, proxies can carry out notary, bank, and financial transactions. Meanwhile, the profits flow to the real owner of the company, who is often going through this charade to evade taxes.

On documents issued by the Ministry of Taxes, Tarikh Hajiyev is the founder of the following companies:

The State Procurement Agency website says that some of these companies have won government tenders. In 2013, Elmar-Tikinti Ltd. won a Ministry of Health tender for 4,136 Azeri manat (about US$ 3,940) to provide stationery and household goods for Hospital 2 Sumgait city. Kross-LTD-KO Ltd. won tenders worth 134,472 Azeri manat (about US$ 128,000) from the State Border Service and the ministries of Health, Agriculture and Defense.

Tarikh Hajiyev says he knows nothing about these tenders.

“I keep asking my brother Rashad about the companies. 'It is not a problem. I will have all of them annulled,' he tells me.

"But how can he have them annulled? He has sold one company to someone else, appointed a director, had the documents signed and stamped.  However, my name is still written at the end of the documents." 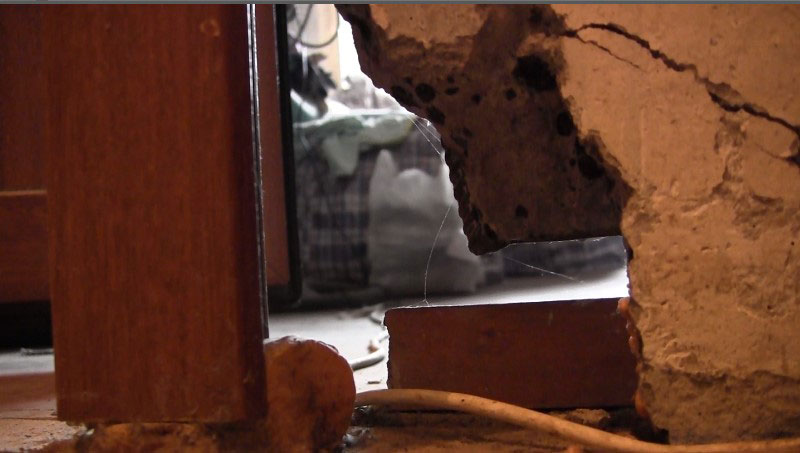 A broken wall in the home of Shamil Aliyev, now serving a prison term for a million-dollar tax liability.Rashad Hajiyev, 64, has been the head of the Fuzuli District Department of Taxes since it was created in 1991, shortly after Azerbaijan declared independence from the former Soviet Union. Tarikh Hajiev is four years younger, and says the two brothers never had any problems until Rashad told him to sign those documents. Now the two are no longer speaking.

"(My brother) has apartments in Narimanov, in Razin, in Garachukhur, in Mardakan. People say he has many more apartments in other places," Tarikh Hajiev said.  "I do not know how he earns this money. He's left me completely broke. He registers companies in my name and then sells them."

Tarikh Hajiev claims that when he was called to the Tax Crimes Preliminary Investigation Department for interrogation, the investigator refused to take his statement when he heard that Rashad Hajiev was involved in the case.

Tarikh Hajiyev says he cannot afford a lawyer. He lives on a small disability pension plus 90 Azeri manat (about US$ 85) he receives monthly as an Internally Displaced Person (IDP).

"I spend 90 manat just traveling back and forth for this case," Tarikh Hajiyev said. "I haven't had flour in the house for a month. My cousins have shops, and I get loans from them to travel to Baku and back."

He claims his brother has registered companies in the names of other relatives, and he said they also just want their names taken off the documents.

Still others named in the Hajiyev paperwork are not relatives, and at least one of them became embroiled in a completely different tax scam.

Shamil Aliyev is listed as the legal representative of Kross-LTD-KO Ltd. and İnshaat Tikinti Kompanii Ltd., two of the companies for which Tarikh Hajiyev is registered as founder. 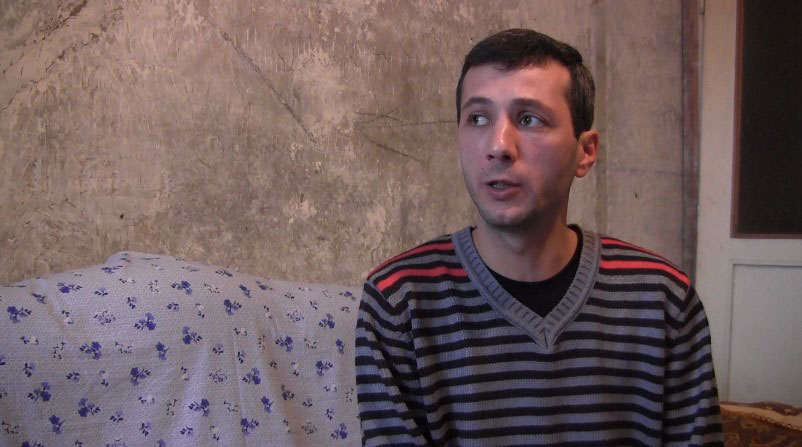 Samir Aliyev says he and his brother never had much money or education.Aliyev is currently serving the third year of a five-year prison sentence for large-scale tax evasion involving a company called Tajhizat Servis Ltd., which is not part of the Hajiyev network.

According to Shamil’s brother Samir, Tajhizat Servis Ltd. was registered in Shamil Aliyev's name, and he was given a 300 Azeri manat (about US$ 285) monthly salary and between 10-20 manat (about US$ 9.50-19) every time he took money from the bank. At one point, there were 13 bank accounts open in the name of Shamil Aliyev. But after one year, he found himself in prison.

The Aliyev brothers were told a man known as Shahin Aliyev (no relation) was the head of this money-transfer operation. He couldn't be found to comment, but his wife answered the door at their house in a northern suburb of Baku. She said her husband was a trader. "I do not know the details of his business," she said. "Here, women do not ask anything to their husband. Whatever they earn and bring home, wives do not question.”

According to an official publication of the Ministry of Taxes, Shamil Aliyev is the head of Tajhizat Servis Ltd. and has a tax liability of 1,504,903 Azeri manat (about US$ 1,433,000).

“We two brothers grew up in difficult circumstances," Samir Aliyev said. "Our mother passed away in 1993. Somebody must have noticed that we did not have any strong relatives or good connections, and that both of us are illiterate. They told us to do whatever they wished.

"Many people suffer because of them. My brother was sentenced to five years; he has already been imprisoned for over three years. One person was sentenced to seven years. There was even one who died in prison due to illness. It was tuberculosis, I think. He was a poor boy."

When Rashad Hajiev, the head of the local tax department, was asked if he had registered seven companies in his younger brother's name, he responded: “It is not true. It is a lie.” Then he switched off his telephone.

The Ministry of Taxes confirmed that it was investigating Tarikh Hajiyev's case. It said it had confirmed that his signatures on the documents were authentic. The ministry says it told him that if he wants to officially resign from these companies, he should apply to the corresponding tax office and carry out the relevant legal procedures.

That means Tarikh Hajiyev would have to apply to his older brother. The ministry has not responded to a question on whether Rashad Hajiyev had been investigated regarding the founding of these companies.

Tarikh Hajiyev still receives tax letters every month. He says the local post officer wants a tip paid to him for delivering such important letters.