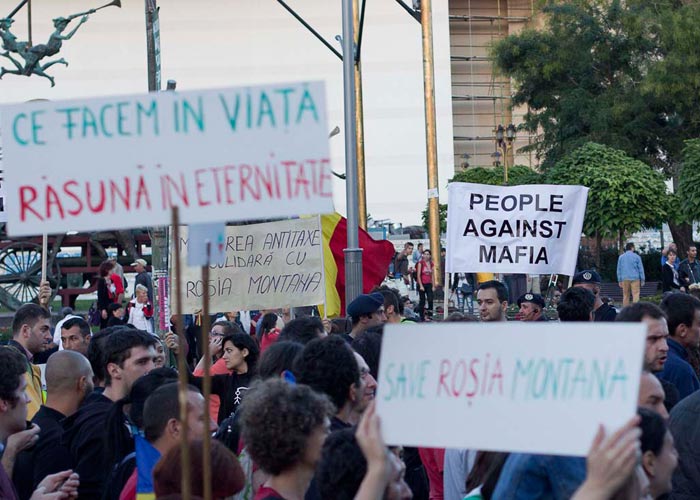 By Dan McCrum and Paul Radu

Vasile Frank Timis, a businessman whose activities in the mining sector in Romania ignited some of the biggest scandals around mineral resources exploitation in the country, finds himself at the center of a new scandal involving substantial payments related to a mining investment in West Africa.

Timis is best known in Eastern Europe for initiating the Rosia Montana project in the heart of Transylvania to mine for gold using cyanide-leaching technology.

Timis left the company behind the Rosia Montana proposed exploitation but the controversy continued, prompting thousands of Romanians to take the streets in September 2013 in one of the largest series of protests since the fall of Communism in the country.

Despite a rocky start to his career including two convictions in Australia for heroin dealing, Timis has built a fortune over the past three decades, primarily in natural resources and mining.

Timis’ investments have been controversial not only in Romania but in other countries including the United Kingdom, where one of his most important companies, African Minerals, is listed on the Alternative Investment Market, part of the London Stock Exchange.

African Minerals is at the heart of the current controversy. In 2012, the Sierra Leone mining company made a US$ 50 million payment to the Cyprus-based company Global Iron Ore (GIO), raising fresh questions about Timis’ business conduct.

The stated reason for the payment was for the cancellation of contracts after African Minerals secured a large investment from Shandong Iron and Steel, a Chinese state-backed entity, in return for an ownership stake and rights to the ore produced.

But in August of this year African Minerals announced it had received affidavits alleging Timis secretly owned a quarter of GIO. He denies any link, and an inconclusive internal investigation found the claims were "were neither proved nor disproved.”

Reporters for OCCRP and the Financial Times’ FT Alphaville investigated the deal and found that GIO used to be owned by Romanian citizens who, when contacted, said they knew nothing about the company. Reporters also found a series of connections between a current GIO shareholder and other Timis-related companies.

At its peak in 2011, African Minerals’ shares were valued at more than £ 2 billion (US$ 3.5 billion), but they have  since collapsed and trading was suspended in November as it negotiates with lenders.

Public filings for GIO Cyprus in November 2011 show two shareholders. One is Eden Dervan, also known as Aden Dervan. A former member of the British military who served with the Royal Green Jackets, he pled guilty to charges related to the possession of plastic explosives and ammunition in 2008. The case arose after officers from the Metropolitan Police's Money Laundering Investigation Team discovered ammunition, explosives, surveillance equipment and firearms during a search of his West London home the previous year.

A spokesman for Timis said, "Frank had met Mr. Dervan three times, and did not know about his criminal record until after the contract with GIO was terminated." He also said that Timis dealt with Dervan's business partner, Craig Coughlan, on GIO matters.

The other shareholder listed on corporate filings for GIO is a Cypriot entity called Kontillo Resources Limited. Kontillo also appears on the shareholder register of two oil and gas companies that attracted controversy in Australia due to Timis’ involvement: African Petroleum and International Petroleum.

The two companies were run by Perth mining entrepreneur Tony Sage, a longtime business associate of Timis, and in 2010 the men fought and ultimately won a battle with the Australian Stock Exchange over the involvement of the Romanian.

African Petroleum was originally named Global Iron Limited, an Australian listed company. When it bought a Cayman entity called African Petroleum Corporation Limited for stock in early 2010, it adopted the acquired company's name. The prospectus outlining the transaction and a $ 230 million share issue lists Kontillo Resources among the shareholders of the Cayman entity, with a 4.1 percent stake.

In 2010 the Australian Stock Exchange tried to block the re-listing of both companies due to Timis’ involvement, as his name had not appeared in an initial prospectus for a $30 million capital raising for International Petroleum. A tribunal eventually overruled the ASX on appeal, but the companies were listed instead on the National Stock Exchange, Australia's junior market.

In early 2012, the value of African Petroleum stock soared to more than A$ 3.5 billion after it reported a significant oil discovery off the coast of Liberia. However, the share price collapsed more than 90 percent in the following 12 months and African Petroleum's listing was subsequently moved to Norway. Shares in International Petroleum were suspended following an inability to publish accounts for 2013.

As for the other shareholder, "Kontillo was not in any way controlled by Frank", said the spokesman for Timis. "Everything Frank has done has been totally within the rules and above board."

GIO Cyprus adopted its current name in February 2011, the year that it began to undertake work for Timis at African Minerals. Initially called Girovend Investments when first registered, the company also changed its name twice in 2009, to ALJ Corporate Recovery CY Ltd and then Ascendi (Cyprus) Limited.

According to Cyprus company filings, prior to being renamed Global Iron Ore, Ascendi (Cyprus) Limited was owned by two Romanian businesspeople, Gabriel Popa and Alida Constanta Velea, and two Cypriots, Christakis Iacovides and Ninos Koumettou. Iacovides is an accountant and insolvency practitioner, and Koumettou is a fellow director of the Cyprus-based CRI Group, which shares an address with GIO in Nicosia.

However the Romanians have denied involvement with the Cyprus-based Ascendi. They said they have no knowledge of this company or of GIO. "I had no idea about Ascendi Cyprus. Mr. Iacovides was my business partner in Ascendi Romania," said Velea.

The Romanian corporate registry shows Iacovides was involved in a number of businesses in the east European country, one of them called Ascendi Inc. SRL.

Popa also said he was never involved with any Cyprus company.

Iacovides, on the other hand, gave a different account:

An opportunity arose, whereby we thought we may need a subsidiary of Ascendi (Romania) Ltd.,  therefore on 7 May 2009 (we) changed the Company’s name to Ascendi (Cyprus) Ltd, transferred 250 shares to Gabriel Popa (“GP”), 250 to Alida Velea (“AV”); NK and myself kept 250 shares each. It was intended for Ascendi (Cyprus) Ltd to trade in parallel to Ascendi (Romania) Ltd, but (it) never did.

On 26 January 2011 all shares were transferred to my very good and trusted friend, Eden Dervan, (I have known him since 1991) who changed the Company’s name to GIO, and traded it together with Craig [Coughlan]. I remained as a Non-Executive Director; signed accounts and statutory forms from time to time and did what a “nominee” director does when fulfilling the role of a resident officer of a company and resigned towards the end of 2012, when I was asked to do so.

The success of GIO made some individuals “hungry” and eager to share the “spoils”... If you are genuinely investigating “complaints” and you are seeking the truth, then I respectfully suggest that you get both sides of the story by speaking to lawyers involved in Cyprus, UK and USA."

Koumettou said that he knew Popa and Vela, who had been working for a company which issued luncheon and holiday vouchers. "They were looking for capital, looking to break away from the company and set up a new one." He said that it had worked for three or four years, then been sold, and that the two "certainly have no relation or connection to anything else which happened."

He said Ascendi (Cyprus) had been a dormant company which was sold. "We did nothing with that company. Many accountants have companies where they are shareholders or have companies that they don't use and we sell it on. I expect that is what happened." He said he knew nothing about what happened to the company after that.

The share of the "spoils" is the subject of a legal squabble playing out on both sides of the Atlantic. GIO was placed into liquidation early this year in Nicosia, with Iacovides' firm acting as liquidator. The attempt to wind up the company has been challenged in court by creditors, which include a mysterious British Virgin Islands entity called Marston Equities.

Another possible investor was revealed by African Mineral's internal investigation into the matter, prompted by affidavits received from a UK law firm in February. The company said "the affidavits were provided by an alleged investor in GIO and the former chief operating officer."

Inquiries by the reporters have determined the former to be Emmanuel Kato, a Ugandan businessman who allegedly invested £ 500,000 in 2011 in return for small stakes in GIO and a related company, GES, before terminating the agreement the following year. The alleged shareholding was not registered in Cyprus.

Under Dervan, GIO provided onsite logistical support staff in Sierra Leone to African Minerals, such as managing the development of infrastructure and the construction of a desalination plant, according to the agreement detailing terms of the pay-off. The firm also found Chinese customers for African Mineral's ore.

However, as the Financial Times has reported, according to a joint venture agreement dated November 2011, Marston Equities was entitled to 70 per cent of all revenues, profits, payments or income received by GIO. Yet while Marston was the senior partner, the document stipulates all contracts “be entered into solely in the name of GIO.”

The joint venture was signed by Dervan and Pritpal Singh Gill, a UK businessman who is described as "owner/managing director" of Marston on the document. In 2012 a UK court ruled in a civil bribery case brought by Bank of Ireland that Gill had acted dishonestly in procuring loans from a bank executive, in one case promising the executive 10 percent of a project to be funded. Gill declined to comment.

Timis personally authorized the US$ 50 million payment to GIO, as compensation for tearing up its agreements with African Minerals. After the cancellation of the contract GIO explored other business opportunities, including trading Libyan oil, according to people familiar with the firm. However a London office was closed shortly before it was placed into liquidation.

Timis, Dervan, Sage, and representatives for Marston and GIO declined to comment. African Minerals said Timis had authority to make the US$ 50 million payment, and was unaware of Dervan's criminal record.

GIO was run by Dervan and Craig Coughlan. The latter is the son of Dermot Coughlan, an African Minerals non-executive director from 2010 until July this year, when he resigned from the board following a Financial Times report that he and his son held an undisclosed financial interest in Global Iron Ore Hong Kong.

In 2013 the Hong Kong Branch of ABN Amro, a Dutch bank, was granted a charge against the property of GIO Cyprus, according to Cypriot public filings.

Craig and Dermot Coughlan did not respond to requests for comment.