First Person: One night in the life of Ukraine’s EuroMaidan

It was around 2 a.m. on Dec. 11 when, alarmed by reports of an upcoming attack by the riot police, I entered Kyiv City Hall in the heart of the mass protests that since late November had been taking place in Ukraine’s capital.

Now the building was being used by the protesters as a sleeping lodge and makeshift hospital. 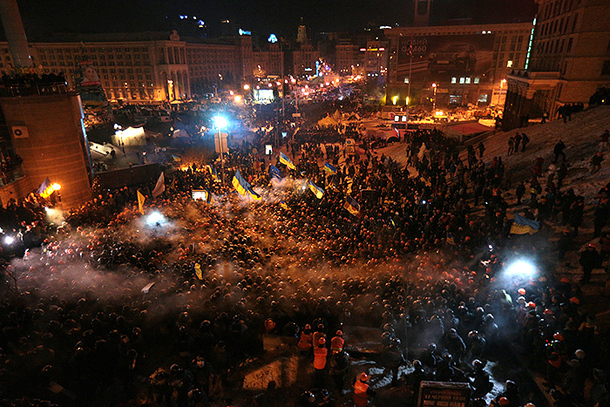 Inside, around 200 mostly male protesters – women had been asked to leave the building – were getting ready for the attack. They had just finished using pieces of wooden furniture to barricade the stairs leading from the entrance to the main hall where most of the people were staying. With quiet concentration, wearing white and orange hardhats, they were taping pieces of rubber mats to their forearms, chests, shoulders and legs to protect themselves against police batons. It made them look like medieval Japanese samurai from an Akira Kurosawa movie.

One of the protesters, a man in his forties, asked me to take his photo with an old scratched mobile phone. He looked ready for any outcome and amazingly at peace. He posed in front of the barricade holding a World War II-era red-and-black banner used by Ukrainian insurgents with his other hand was pressed to his heart.

The current events in Ukraine began on Nov. 21 as a protest against the government’s decision to postpone the signing of a landmark association agreement with the European Union, something that in the eyes of many citizens would have finalized the country’s shift from Russia’s orbit of influence towards European integration.

On Nov. 30, the government used brutal force against a handful of young people who were staying overnight at the protest camp. In reaction, rallies continued on a much larger scale with the crowds peaking at one million people demanding three things: punishment for those who ordered force against protesters, the government’s resignation, and early presidential and parliamentary elections.

Since then, Kyiv’s downtown area had been occupied by the protesters, who set up a stage, surrounded the area with barricades, and erected approximately 100  military-style tents, providing all imaginable services – from kitchens and warm clothes distribution outlets to a chapel and IT-tent, offering free Wi-Fi and battery-charging.

A huge banner tied to one of the barricades, addresses the passers-by, as if apologizing for the inconvenience of blocking traffic: Understand us, we’ve had enough! The banner on the opposite site of the area is even more unequivocal: Slaves are not allowed in paradise.

And there’s nothing slave-like in the mentality of the people protesting on the streets of Kyiv. No matter what the outcome of EuroMaidan will be – and the current situation can best be described as stalemate, with neither side taking over or getting close to compromise – the impact it’s had on the people in the streets is stunning. 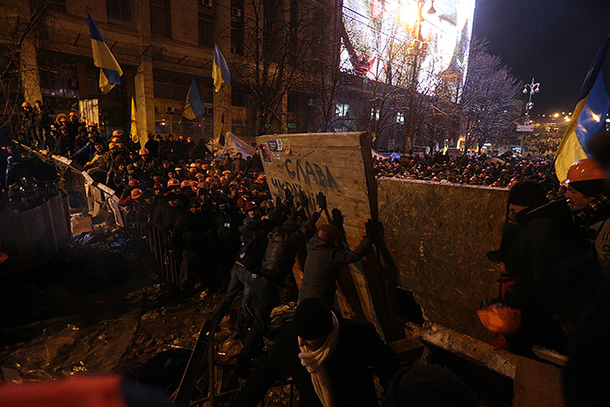 When on Dec. 11 the late night news reported that it was highly likely that police would attack the protesters’ camp, it felt like a cheap scare tactic to keep the public vigilant. That day Kyiv was simultaneously visited by two high-ranking foreign officials: U.S. deputy secretary of state Victoria Nuland and Catherine Ashton, the top EU official in charge of foreign affairs, who were staying in town overnight. Both U.S and EU authorities repeatedly warned the government against using force against peaceful protesters, and attacking the demonstrators while their high-ranking representatives were in town seemed nothing but absurd.

That night I woke up in the middle of the night to check the news – a habit that many of my colleagues have developed over the recent weeks as well. The sight of thousands of riot policemen in heavy gear slowly advancing towards the protesters‘ camp amid the dim streetlight and smoke from the campfires people used to stay warm, had an almost-cinematic quality to it.

It was about an hour later when, after checking the city hall, I finally reached the site of the main standoff between the police and protesters. The picture was truly horrifying.

While at times it seemed almost calm with thousands of police and protesters just pushing against each other, suddenly violence would erupt with the sound of police batons and the screams of people being hit. Then the mayhem would cease as suddenly as it started. Most incredibly, the police could hardly advance towards the camp, as the protesters just would not retreat.

The stage in the midst of the protest camp, arguably the safest place that night, was occupied by women, who kept appealing to the police not to use violence. Then someone took a microphone calling on the church to start ringing the bells on the nearby St. Michael’s Cathedral, a medieval ritual used to signal alarm to the city residents. Soon, the bells started ringing. The protesters began to chant: “Kyiv, rise,” appealing to the city residents to wake up and help the protesters defend the camp. The crowd of protesters slowly started growing in number.

At about 4 a.m. the U.S. Department of State issued an unusually harsh statement, using the word “disgust” to describe its reaction to the police attack that night. It’s a fitting word. I don’t remember any other time when I was so looking forward to the sunrise. There were several more outbreaks of violence, which subsided into unbearably long periods when nothing would happen at all with two sides just pressing at each other in the freezing cold, like two heavyweight boxers in a clinch, each waiting for his adversary to show any sign of weakness.

It will be a long time before I can forget some of the faces from that night. A young woman, who didn’t want to stay in the relative safety near the stage, broke into the front line during one of the violent encounters and then just burst into tears, as if she couldn’t believe what she saw, until two volunteer paramedics took her away.

There was also a man in his 50’s, who seemed to be a journalist, who was very agitated and keen to be in the middle of the action. A bit later I saw him sitting on the pavement, choking from the tear gas and gasping for air.  When I asked if he’d like to be assisted to get away from the clashes, he gladly agreed and did not try to return.

At around 6 a.m., hearing that the police might attack the protesters’ headquarters located nearby, I went inside and amid all the preparations was surprised to see a man opening dozens of plastic bottles of  sunflower oil. The oil was to create a slippery surface for the policemen who were outfitted in heavy gear, so that the protesters inside would have more time to prepare for the encounter. It is while contemplating the efficiency of such a method that I saw the sunrise from the second floor window of the headquarters. Almost immediately the police were ordered to put their shields down, which indicated the attack was over.

As numerous buses took the riot policemen away from the protesters’ camp, the air filled with the sounds of Holy Mass that priests from nearby churches were serving on stage to support the protesters. By now the jubilant crowd exceeded 10,000 people. It all could best be described by a line from W.B. Yeats’ “Easter, 1916” remembered from high school: A terrible beauty is born.

As I was on my way home to finally get some sleep, I saw that about 100 riot policemen were trying to attack City Hall, as three of their buses blocked the entrance to the building with their passengers preparing to break into the building. 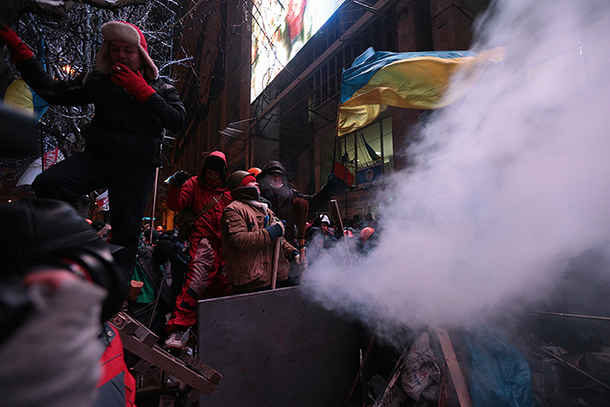 I immediately thought about my earlier visit and the protesters inside, but at that point someone on the second floor opened a fire hose at the police, who immediately retreated to their buses amid the barrage of water.

Thousands of people, meanwhile, surrounded the police buses demanding that they leave the site and return to their compounds. In about 20 minutes the police commander asked that the crowd to step away, so that the buses could leave.

After the buses disappeared the crowd, which by then occupied the entire area in front of the building, started chanting “Victory!”

I remembered how a day earlier I was amazed by an elderly lady who was giving orders to a group of young protesters on how to prepare the fire hose defense, so that it catches the attackers by surprise. When I mentioned to her that the police could easily turn off the water prior to the attack, she hissed at me that I shouldn’t ruin their luck with my pessimism.

As I was moving through thousands of jubilant people whose sheer will and resilience had just forced the government to retreat, I knew she was right.

That night the protesters in Ukraine had all the luck they deserved.

Vlad Lavrov is OCCRP’s regional editor based in Ukraine.