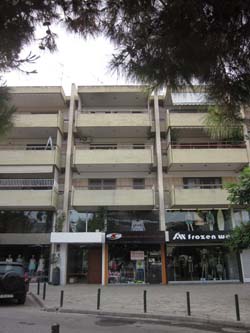 The Esperidon Square neighborhood in Athens is home to many Serbian Mafia.

CINS uncovers assets of assassin overlooked and untouched by authorities.

After police arrested Milorad “Legija’ Ulemek, the special forces mob boss who ordered the assassination of Serbian Prime Minister Zoran Đinđić in 2003, the Serbian Prosecutor’s Office went looking for his assets to claim.  Ulemek should have had plenty – the crime figure ran the lucrative Zemun clan for years and had been taking a cut of most of its actions.  But when they went looking, they found very little.

The Center for Investigative Reporting in Serbia (CINS), may have found some of those missing assets.  CINS has found that Ulemek, using the fake name Vlado Vukomanović founded an offshore firm in Panama with his wife back in 2001 that remains active today.  It is not clear what assets it holds.

Legija was sentenced to 40 years for crimes including ordering Đinđić’s death, kidnappings and murders.

After arresting him in 2004, prosecutors opened a financial investigation of the former commander of the Special Operations Unit [JSO].  They seized some property in the Cerak area of Belgrade  -- worth a few hundred thousand Euros.

However, in testimony members of his gang estimated he earned far more in a decade-long run of extortion, kidnappings, murder, drug trafficking and other crime perpetrated by the Zemun gang, an organized crime group based in the Belgrade suburb of Zemun. Maybe tens of millions of Euros, they thought.

For example, Ulemek collected half the ransom for all kidnappings while the rest of Zemum divvied up the other half., according to testimony from Dejan Milenković Bagzi. From just four kidnappings (of Milija Babović, Miroslav Mišković, Vuk Bajrušević and Suad Musić) the clan collected about €20 million, meaning Ulemak’s take was €10 million. But the local prosecutor’s office managed to find and confiscate only a 178-square-meter plot in Belgrade, with an estimated value of about €200,000.

Prosecutors refused to discuss their attempts with journalists from CINS.

In an interview with CINS, Mile Novaković, the former chief of criminal police for the Ministry of Internal Affairs, said that prosecutors and police could have done a better job uncovering the mobster’s assets.

“They didn’t undertake as detailed an investigation as they maybe could have,’’ Novaković said.

CINS reporters, working nine years after Legija’s arrest and without subpoena powers, discovered another potentially lucrative asset -- an offshore company Ulemek registered in Panama with a fake name and a forged Croatian passport.

The central American country of Panama, is one of the more popular offshore countries local business owners and criminals use to hide assets or to avoid taxes.

According to documents from the country’s business registry, Legija, his wife Aleksandra Ivanović, and an unknown person named Anđela Klobučar founded the company ‘’Stone Wall Shipping & Trading, S.A.’’ on Sept. 20, 2001.

This firm’s capital amounts to US$10,000, according to the Panamanian registry’s data, and some of the activities it is registered for include "activities of a marine agency, and the selling and renting of boats and shipbuilding enterprises."

According to the details of the verdict, the firm was founded in the period when Legija was actively committing criminal acts with the Zemun Clan. In order to register the company, he used a registration service called, Chen, Estrada, and Wong.

Legija was written in as the secretary of this firm, his wife as general director, and Anđela Klobučar as treasurer.

CINS journalists called Ulemak’s attorney Dušan Danković to ask about the company but the lawyer was unable to meet with Ulemek, who is serving time in the maximum security section of Zabela Prison near Požarevac. 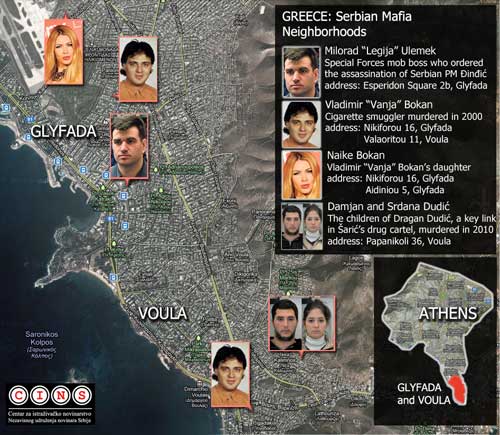 CINS called the house where Ulemek’s wife is known to reside, but no one answered.

A CINS journalist called every telephone number known to be connected with the last name Klobučar and contacted a Anđela Klobučar through social media but could not find the person identified in Panamanian records.

Legija’s company from Panama does not appear to be active in Serbia, according to the Serbian Business Registry Agency (APR).

However, each of the three owners listed in the company gave as their address a residence on Esperidon Square in the wealthy Athens suburb of Glyfada.

This address is also listed as his wife’s place of residence in Greece, according the Unit for Economic and Financial Crime, a department in the Greek Ministry of Finance.

“There was a story that, down in Greece, he (Legija) had some property, that he had an apartment,’’ Mile Novaković told CINS.

He said Serbian Police investigated that story but turned up no results. He adds, "He had friends in Greece. They were constantly coming here to see him. He did some work with them, but that hasn’t been investigated either."

Because of work being done on the Greek land records database, reporters could not find the owner of that address.

Esperidon Square is located in a residential building with boutiques on the ground floor, and with apartments above it. Greek names and one firm are listed on the intercom in front of the entrance.

CINS journalists rang every doorbell but no one recognized the names or knew if they had lived there. One resident said she had heard that a Serb lived there but did not recognize the name.

Reporters talked to other people in the neighborhood but none had heard of the three.

Records from Panama that CINS obtained show that three people including the man who ordered a prime minister assassinated and his wife started the firm Stone Wall Shipping in 2001. It is still operating.

Glyfada, boasts beautiful beaches and palatial commercial and guest facilities. Apart from that, it is home to more controversial Serbian citizens.

A few blocks from Esperidon Square lies a house whose address was used by the notorious Vladimir Vanja Bokan to establish his firms.  Bakon was a well known crime figure and cigarette smuggler who was murdered in 2000.

Bokan’s firm, "Polestar Enterprises Inc.," through which he controlled press distribution in Serbia, is registered at the address of single family house at the corner of Nikiforou and Saki Karagiorga streets.

His daughter Naike Bokan used the same address to register a firm in Panama – ‘’Castello Compania Naviera S.A. According to data obtained from Panama, she founded one more firm– “Orel Trading S.A” at an address on Aidinou Street in Glyfada, where a residential building is located.

Both firms were established in 2001, after the death of her father, and a few months before Legija founded his firm. She ceded the business of press distribution in Serbia, which she inherited from her father, to Darko Šarić, the wanted international drug cartel boss.

Mile Novaković told CINS that one more thing connects Ulemek and Bokan, apart from their neighborhood. Ulemek, after spending about four years in the French Foreign Legion, returned to Serbia and got his first job with Vanja Bokan.

“He worked in security for his places of business, boutiques which Bokan had at that time, and they stayed in good relations. Later, Ulemek started his own businesses,” said Novaković.

In 2005, Vladimir Beba Popović, in testimony at the Đinđić assassination trial, also mentioned that Ulemek "was, for a long time, the personal bodyguard of the late cigarette dealer Vanja Bokan."

Describing his meeting with Legija, Popović testified, “I know that Milorad Luković (Legija) was talking all the time about how he got into doing business and how that business developed in Greece and Thailand.”

According to the Greek media, Bokan was murdered   in front of his house, immediately next to Glyfada.

Nearby on Papanikoli Street, the children of Dragan Dudić (a.k.a. Fric), a key link in Šarić’s drug cartel also live. A Greek directory lists the resident as Srdana Dudić, the name of Dudic’s daughter.

According to investigations by the Serbian Prosecutor’s Office, Dudić often stayed in Athens and was an organizer of international cocaine smuggling. He, was also a business partner with Rodoljub Radulović (a.k.a. Miša Amerika), another influential member gang member. Dudić was murdered in Montenegro in 2010.

Srdana and her brother Damjan were arrested for laundering money for Šarić and Radulović. During the arrest, a large amount of money was found in their apartment, says a police statement taken after the arrest. They were all arrested, and after posting bail, they were released. The investigation into this case was closed, but the indictment has still not been lifted, according to the prosecutor’s office inAthens.

Novaković told CINS that the financial investigation into Legija’s property was obviously not done when it should have been.

"The longer the investigation period is extended, the more difficult it will be, because traces will be wiped out," Novaković said.