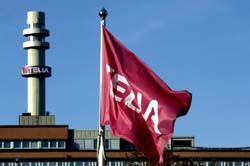 The headquarters of TeliaSonera in Stockholm

New details have emerged regarding TeliaSonera’s alleged dealings with Gulnara Karimova, the daughter of Uzbek dictator Islam Karimov. Documents obtained by Swedish Television (SVT) allege the direct involvement of Gulnara Karimova in the establishment of a protection scheme designed to shield TeliaSonera from customs and tax authorities in return for millions of dollars in kickbacks to Karimova. The bribes were to be shrouded in payments to supposed charitable and cultural organizations. The documents obtained by SVT are alleged to be notated in Karimova’s handwriting.

OCCRP, in cooperation with SVT, reported on the details of the original steps TeliaSonera took to obtain access to the lucrative Uzbek market.

The documents, part of a program that will be aired tonight on the public broadcaster, show TeliaSonera being asked to pay hefty bribes in exchange for protection from government agencies and an infusion of new clients. If true, they indicate a direct dialogue between TeliaSonera and Karimova.  Among the handwritten notes is an acknowledgement that TeliaSonera agreed to pay Karimova $5 million for an increase in subscribers -- an increase brought about after the Uzbek government quashed a TeliaSonera competitor. The note alleging the agreement is not dated in 2007 or 2008, the timeline of the original scandal, but July 31, 2012. SVT vetted the documents with a handwriting specialist who verified them as having a high probability of being written by Gulnara Karimova. 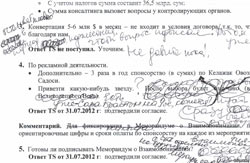 The documents appear to have been reviewed in pen by Gulnara Karimova herself.

Karimova’s handwritten notes allege another illegal deal with TeliaSonera which TeliaSonera ex-CFO, John Davy, likened to a 1930s Al Capone style protection racket. Karimova’s deal implies protection from customs, tax, and other authorities in a manner which would aid TeliaSonera’s ongoing business. In return, she asks for $3 million per quarter for protection from five government ministries. The documents show TeliaSonera counteroffered with $2 million per quarter. Karimova warned that the lesser amount would mean the telecom company would be protected from only two government organizations and would end up paying more in the long run.  The telecom giant haggled with the dictator’s daughter over an illegal bribe scheme as if it were a standard business contract. According to the documents, the parties agreed on an arrangement that would net Karimova up to $12 million annually. The handwritten note is dated August 2012, long after the original scandal’s supposed timeframe.

One issue discussed in the documents is the transfer of funds themselves. According to the documents, Karimova developed a plan whereby payments would be made indirectly to her through donations to supposed charities and cultural organizations. Of the three charities TeliaSonera was to sponsor according to the payment arrangement, SVT confirmed that one, Style.uz, has been sponsored by TeliaSonera’s Uzbek subsidiary for several years.

TeliaSonera’s ex-CFO, John Davy, told SVT that the use of charities by government officials to hide bribes was a regular practice in Uzbekistan, and that many senior Uzbek government officials have personal charities set aside for just such agreements. Officials would threaten to disrupt service unless a bribe was paid. Paying bribes became a regular practice, akin to a monthly bill. In financial statements, however, the payments were labeled as charitable donations. Davy’s statement was confirmed by other SVT sources who confirmed the pervasive culture of bribery in Uzbekistan.

Davy, an executive turned whistleblower, is a controversial figure.  The former TeliaSonera exec served three months in prison in New Zealand a decade ago for lying on his resume to get a job.

TeliaSonera CEO Lars Nyberg (shown here in January) stepped down February 1 as the company, whose two largest stakeholders are the Swedish and Finnish governments, came under increasing scrutiny for its activities in Uzbekistan.

The 2007 deal which allowed TeliaSonera access to the Uzbek market, in which the Swedish company paid $320 million for a 3G license, earned the Swedish company a valuable new customer base as it sought to expand its reach across Eurasia. However, SVT and OCCRP were able to show that the money was paid to an offshore company owned by a close Karimova associate rather than the government. The documents also provide evidence that the cycle of bribery between TeliaSonera’s Uzbek subsidiary and Karimova continued at least into the summer of 2012. The continued deals with Karimova come despite formal criminal investigations in both Sweden and Switzerland, public condemnations of the 2007 Uzbekistan deal by senior TeliaSonera executives as recently as this year, and resignations over the scandal which included both the Chairman and the CEO of the company at the time.

Despite the long shadow cast by the Uzbekistan deal and the ensuing scandal, SVT reports that many TeliaSonera executives directly involved in the original deal remain at the company; some have even been promoted. That list includes Veysal Aral, President of TeliaSonera Eurasia, a man accused of corruption in Kazakhastan, and Blomquist, who as CFO was responsible for the largest payment in the original Uzbekistan deal. Blomquist is now TeliaSonera’s acting CEO. Blomquist vehemently denied any knowledge of direct negotiation with Karimova or any continued bribery schemes related to TeliaSonera’s Uzbekistan dealings when interviewed by SVT. The company’s policy is to refuse any additional services (i.e. protection) and that the payments to Karimova’s charities were simply donations, he said. The fact that Karimova is strongly linked to the charities is due to her political and societal status, nothing more, he told SVT.