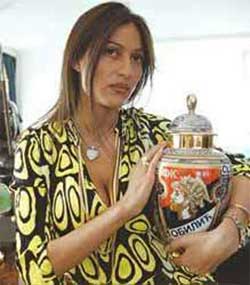 OCCRP continues its People of Interest project by releasing the public records of Svetlana Ražnatović, a turbo folk legend and wife of notorious mobster Zeljko“Arkan” Ražnatović.

Svetlana Ražnatović, the turbo-folk legend adored by fans around the Balkans, has lived at the intersection of Serbian politics, sports, pop-culture and criminal life for nearly two decades. She rose to fame at just 15 years old, married a much older mobster who became the infamous accused war criminal known as Arkan, took over a Serbian football club and ultimately wound up under house arrest because of the way she ran it.

Ceca’s life story is a fascinating and crucial part of Serbian history. The Organized Crime and Corruption Reporting Project has chronicled that life, from her works of charity, most famous television appearances and even allegations she uses threats, intimidation and violence to get what she wants. Compiling thousands of pages of court reports, property records, business registry documents in Cyprus, Belgrade and elsewhere, reporters have created a factual database to document a life long surrounded by lure and rumor.

According to court records, Ceca is the director of Obilić Football Club, once an obscure club that gained first league status after her husband took it over. Ceca took over after his death.  In 2003, she was arrested and served four months in prison during Operation Saber, the wholesale crackdown on organized crime following the assassination of Prime Minister Zoran Đinđić. Police found incriminating documents in her Belgrade villa and she was eventually indicted in 2011 with embezzling millions of euros from the club in player transfers. Police also found in the villa a cache of weapons and other articles – 88 in all. Among the objects listed on the official registry of seized property were guns, bullets, binoculars and a pair of thumb handcuffs. She was charged and convicted as well. After time served, she was held under house arrest.

Records show she owns a villa in Cypress along with the one in Belgrade, the latter being used as collateral for a €1.5 million judgment following her conviction. Court records show that the Belgrade house is worth €500,000.

The list of associates and business partners connected to Ceca is diverse and offers insight into her role in society. Ivica Dačić, the Minister of Interior, is a longtime friend and supporter, as are several nationalist politicians who operated with Arkan’s feared paramilitary group, the Tigers. She is a also a partner – and co-defendant – with former football player and brother-in-law Predrag Ocokoljić, and court documents show  Ocokoljić threatened to shoot another man in the stomach if he didn’t turn control of a football club Mladi Proleter over to Ceca.

"You don't know who is behind me, which people and what institutions,’’ Ceca told football club director Aleksandar Olarević, in 2007. “You're stealing the club from my orphans. If Arkan is alive, you probably wouldn't do that." Olarević later dropped the charges.  (See http://www.reportingproject.net/football/sub_sersidepers.html)

Ceca’s life has been the subject of lore throughout the Balkans. OCCRP’s detailed investigation and documents sort out fact from fiction.