Transparency Germany announced Thursday it has filed a criminal complaint against two politicians, one member of Parliament (the Bundestag), and another former MP, for their roles in an alleged bribery case masterminded by the Azerbaijani government known as the Azerbaijani Laundromat. 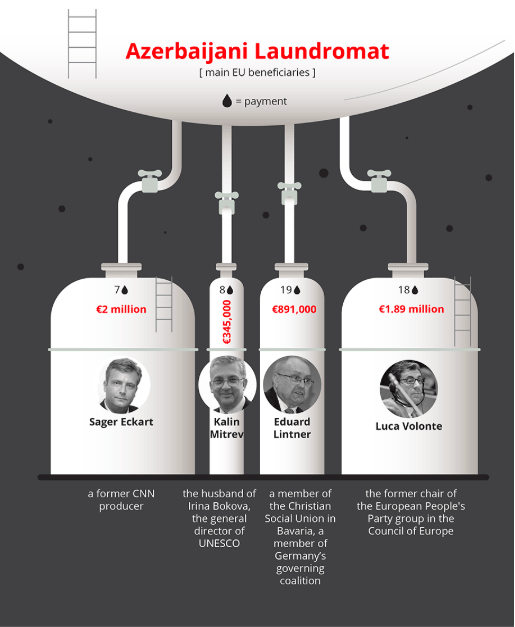 A diagram showing the main EU beneficiaries of the Azerbaijani Laundromat, among them Eduard Lintner (Photo: OCCRP)The watchdog has asked the Public Prosecutor’s Office in Berlin to investigative whether the two officials, MP Karin Strenz (Christian Democratic Union of Germany) and former MP Eduard Lintner (Christian Social Union in Bavaria), are in violation of the German Criminal Code’s section 108e on bribery and corruption of elected officials.

“The prosecutor must check whether there are sufficient indications of an initial suspicion of abusive bribery, which must be processed criminally. That's why we filed a criminal complaint with the Prosecutor General's Office in Berlin,” Prof. Dr. Edda Müller, Chair of Transparency Germany, explained.

The Azerbaijani Laundromat was an in-depth investigation conducted by the Organized Crime and Corruption Project (OCCRP) and over a dozen European media outlets in 2017. It revealed a complex money-laundering operation and slush fund that laundered US$2.9 billion over a two-year period through four UK shell companies to disguise the money’s origins.

From 2012 to 2014, Azerbaijan’s royal elite used the secret slush fund to pay off European politicians, buy luxury goods and line their own pockets.

Banking records obtained by the Danish newspaper Berlingske and shared with OCCRP show that the Estonian branch of Danske Bank handled the accounts of all four Azerbaijani Laundromat companies—all registered in the UK—allowing the money to avoid detection as it passed through the bank.

The Estonian branch was recently ordered to cease its operations, while OCCRP named Danske Bank its 2018 “Actor of the Year in Organized Crime and Corruption.”

The two German politicians, however, are not new names in the scandal.

Journalists suspected Karin Strenz back in 2017 of receiving payments from Azerbaijan through a firm that lobbied for the regime. Strenz, an ally of Angela Merkel, is alleged to have received between $8,500 and $17,000 from Eduard Lintner, the other politician named in the criminal complaint and a lobbyist for Azerbaijan, via Lintner’s firm, “Line M-Trade.”

Lintner was one of the European politicians paid in the Azerbaijani Laundromat. He admitted to receiving funds,but said he did not personally benefit from them and was ignorant of their original source.

In the spring of 2017, the Parliamentary Assembly of the Council of Europe (PACE) was ordered to carry out an independent investigation into allegations that its members were offered bribes for votes against reports criticizing Azerbaijan’s president, Ilham Aliyev.

The Independent Investigation Board stated in its April 2018 report that Eduard Lintner’ss lobbying in favor of the Azerbaijani government violated the Code of Conduct for Members of the Parliamentary Assembly, and that Strenz’s activities constituted a “persistent conflict of interest.”

Lintner and Strenz were banned for life from access to the Council of Europe and the premises of the Parliamentary Assembly in June 2018.

Just this January, Strenz became the first individual to face political consequences in her home country for involvement in the Laundromat. The Bundestag ruled that Strenz broke parliamentary rules on declaring external income by failing to disclose money and gifts she received from Azerbaijani lobbyists.

German media reported Thursday that the Bundestag made a decision to impose the severe sanction against Strenz, ordering her to pay a fine of about $22,600.