Three men in the United Kingdom (UK) who ran a business selling potentially lethal drugs on the dark web were sentenced Jan. 18 to a total of more than four decades in prison, according to the National Crime Agency. 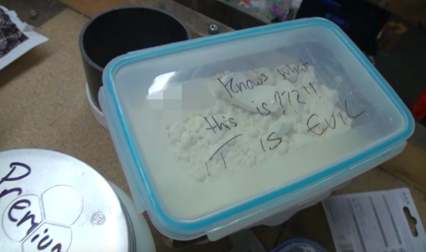 Photo: National Crime AgencyJake Levene, Lee Childs and Mandy Lowther pleaded guilty to exporting and supplying drug mixtures containing fentanyl and its more potent analogue, carfentanyl, to more than 600 people around the globe, some of whom died.

Fentanyl—a synthetic opioid which is about 50 times stronger than heroin—was responsible for 75 deaths in England and Wales in 2017. Carfentanyl—which is 5,000 times stronger—killed 27.

Police said the trio mixed the life-threatening drugs with bulking agents at an industrial unit in Morley, a town within the northern city of Leeds, and then sold the blend on the dark web under the business name ‘UKBargins.’

“While we cannot prove that the specific batches of fentanyl and [carfentanyl] they sold from Morley caused deaths directly, both kinds of substance are linked to many fatalities,” detective Pat Twiggs of West Yorkshire Police said in a statement.

Acknowledging the danger, UKBargin’s website ran the message: “I WILL NOT GIVE ANY INFORMATION ABOUT FENTANYL OR ITS ANALOGUES AS THE CUSTOMER SHOULD ALREADY OF RESERACHED [sic] THESE CHEMICALS BEFORE EVEN CONTEMPLATING USING THEM AS THEY ARE EXTREMELY DANGEROUS & LETHAL IN THE WRONG HANDS.”

One victim’s mother said she hoped her son’s death might serve to warn others. "If I knew that one person had decided not to take a drug off the dark web, or indeed a drug at a concert, or a festival, that they didn't know the potency of, or the dose of, that would be enough for me," said Kathy Livick, whose son died at age 33.

Levene, Lowther, and Childs were arrested in 2017 after police raided their drug facility and seized a total of 2.6 kilograms of carfentanyl, an amount investigators say could make millions of deadly doses. One package alone contained 440 grams of pure carfentanyl, which is the single largest seizure of the drug to date in Europe.

A judge at Leeds Crown Court sentenced Levene and Lowther, who jointly controlled the drug facility, to 16.5 years in prison each. Childs, who was responsible for packaging and mailing the drugs to customers, received 10.5 years.

“Childs, Lowther and Levene knew these drugs were life-threatening yet they continued to sell them for their own financial gain,” said NCA officer Graham Roberts. “The lengthy jail terms handed down to them today are a reflection on their dangerous and careless actions.”