The newly elected Armenian government will continue their efforts to improve anti-corruption, the new deputy prime minister, Ararat Mirzoyan, said in an exclusive interview with Voice of America’s (VOA) Armenian service on Thursday. 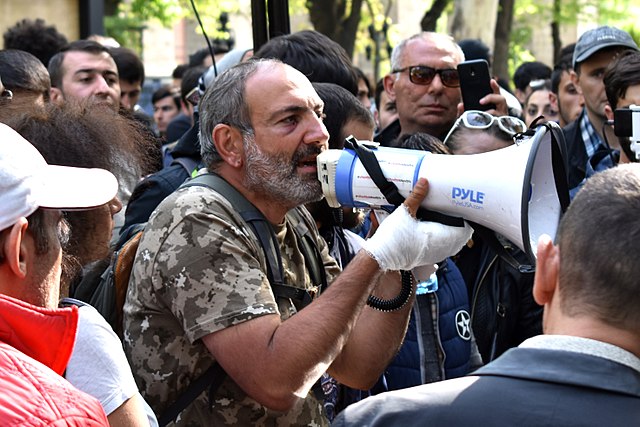 Prime Minister Nikol Pashinyan leading protests before he was elected (CC BY-SA 4.0)When the new prime minister Nikol Pashinyan came to power in May, he promised that anti-corruption reform would be a priority. In the past few months, the government has opened numerous probes and raids that primarily target officials of the former ruling party.

In June, The Armenian National Security Service released video footage of a police raid at the mansion of the head of Armenia’s largest organization of war veterans and a member of parliament from the former ruling party, Gen. Manvel Grigoryan.

Police found a cache of weapons, a collection of luxury cars, military vehicles registered under the names of his relatives, and a private zoo — a tiger locked in a cage and pacing back and forth can be seen.

Authorities have also opened criminal probes into the brother and two nephews of former president, Serzh Sargsyan, according to Radio Free Europe. Investigators estimated that his brother had failed to pay some US$600,000 in taxes.

“This is not our fault that the 99 percent of all discoveries deal with people from a certain political party," Mirzoyan told VOA's Armenian Service.

The new opposition-led government was elected in May after thousands took to the streets to protest ex-president Sargsyan’s move to prime minister. Sargsyan had been in office for two full terms equalling 10 years and elected to the new position by a national assembly stacked with loyal members of his party. The protests, which were led by Pashinyan, resulted in Sargsyan’s stepping down.

The anti-corruption initiatives by the government have inspired the public to demand local change.

Following the release of the Grigoryan video footage, protesters went to the Mayor’s office in Armenia’s capital Yerevan and called for him to step down, according to Radio Free Europe.

After that, protesters showed up at a nuclear power plant and accused the Mayor of Metsamor, Robert Grigorian, of failing to address the city’s problems in the past decade.

The same happened with several more mayors, all of which had been in their post for at least 10 year and were, therefore, members of the former ruling party.

Pashinyan’s steadfast initiatives have some experts wondering if his government will lead to unprecedented systematic change in Armenia.