Italian police arrested 102 suspects on Monday after a 12-year investigation into mafia families that allegedly rule Puglia region on Italy’s southeast coast and are responsible for large-scale drug trafficking from the Balkans. 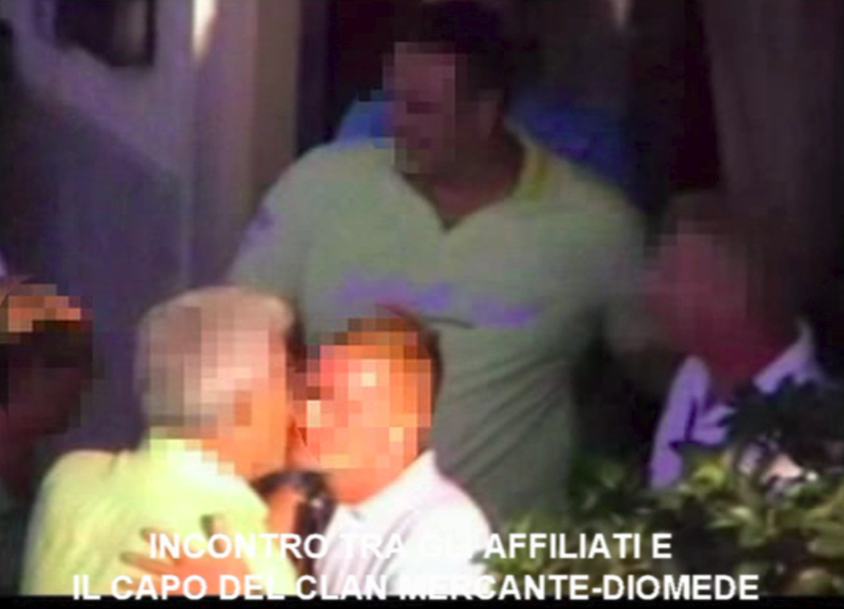 A capo and an affiliate of the Mercante-Diomede clan greet each other during a videotaped meeting Authorities charged the suspects with mafia association, three murder attempts, violent extortion, robbery, theft, personal injury and kidnapping.

Among those arrested was a businessman called Roberto De Blasio, who sat on the local chapter of the Italian Anti-Racketeering Association, FAI.

The association said on Monday that the man had been immediately expelled from the group following his arrest.

Operation Pandora tracked the infiltration of two crime families into the local economy of the province surrounding the port city of Bari, where the arrests took place, Il Fatto Quotidiano reported.

The families are part of the Sacra Corona Unita, a consortium of crime groups that operate in the heel of Italy’s boot.

During a recorded Mafia lesson at a local bar, a boss of the two families, Guiseppe Mercante, said, “In life, three things are important: omerta, respect and a man’s dignity."

While the recordings describe Mercante as a “man of peace” who is good at resolving internal disagreements, he is also said to have power over “life and death."

Evidence also showed that the Puglian mafias have access to military weapons such as Kalashnikovs.

Investigators also said the SCU clans joined forces with neighboring mafia-type associations,  the Calabrian ‘Ndrangheta and the Naples-based Camorra, to smuggle large drug hauls from the Balkans and the Middle East into Europe.

The Anti-Mafia Investigation Directorate, DIA, had been following the Mercante-Diomede and Capriati families and got an insight into their organization, rituals and alleged criminal activities.

Prosecutors found that the organization still uses affiliation rites dubbed “baptisms,” which most Italian crime groups in other parts of the country have long abandoned.

During the initiation, “godfathers” confer their “godchildren” with “mafia character” so that they will act according to the rights and duties of the organizations.

Ancient rituals and traditional ways of solving internal conflict aside, the two Sacra Corona Unita families evolved along with the region’s economy, which it had completely integrated.